For a Scandinavian wine blog, David Morrison’s The Wine Gourd spends quite a lot of its time examining Australian wine and the way Oz critics score wine.

Yesterday The Gourd reminded us of two  recent articles which examine the erratic nature of wine scores, not just across different tasters but also the variations within a single critic’s scores of the same wine tasted on different occasions.  These are analysed from a number-cruncher’s point of view: the cold hard statistics, on the record, surely deserve some examination.

Of course the human reaction to something as fleeting and moody as wine varies. It alters from room-to-room, lab-to-lab, day-to-day and season-to-season, and, given the vagaries of cork, from bottle-to-bottle.

Ambient aromas, colour and noise – like music or conversation – can radically alter the way we interpret wines to ourselves, even before we attempt the risky trick of trying to explain our reaction to others – in a language poorly equipped with words specific to aroma and flavour.

This is partly why we resort to point or star scores: since we learned to count with some proficiency, many humans seem more likely to respect a simple numerical evaluation than they tend to believe or attempt to understand a written or recited review.

For which they can’t be blamed, given the literary capacities of many wine “experts”. This writer’s mantra has generally spun around the suspicion that wine scores are used by critics with little faith in their own writing and descriptive skills when they attempt to influence the buying patterns of people whose reading capacities and comprehension they similarly mistrust.

Such inadequate simplistic rankings, of course, are used with withering efficiency by discounting retailers, especially if they can influence the results of grand mega-tastings with their advertising dollar and corner the market of the winning wines. Which they do.

Similarly, wine show results are always influenced by the judges selected for the job. Tell me the style of wine you want rewarded with major bling at your next regional wine races and I’ll pick you a team of judges to deliver precisely that result.

At least we seem now to have a choice: do we take our wine-buying advice from the math teacher, the English teacher, or the gastronome? The faceless white coat or the vagabond who’s off their face? The poet or the statistician?

A bit of a dab of each seems a surefire system.

Typically, in the same inbox as The Gourd’s missive came another, more challenging yarn from the cannabis connoisseur’s website, Leafly. It’s a classic toe in the water of a new genre of epicurean literature: How to Pair Food and Drinks With Cannabis Terpenes.

As one country or province after another lifts the century-old prohibitions on the myriad forms of cannabis available, and the stock exchangers and Coke plunge in with their billions, the amount of money being spent on publications, scientific research, sophisticated processing tools for the kitchen and whatnot is phenomenal. It’s a bit like all the paraphernalia and accoutrements required for the refined preparation and consumption of alcohol, tobacco, coffee, tea, chocolate, half of gastronomy and the entire pharmacopoeia is suddenly required, for the first time, all at once.

Consider: The American Academy of Cannabinoid Medicine alone lists more than 25,000 articles on cannabis, cannabinoids and the endocannabinoid system published in peer-reviewed medical journals since 1995. It’s on.

The drinks fascinate this drinks critic: huge trans and multi-national liquor and beverage manufacturers, from wineries through brewers to lolly-water/kiddylikker suppliers, are into cannabis drinks big-time. The first had little or no alcohol and not much of your actual stone, but quickly we see these ingredients playing a larger role, sometimes in the same vessel. 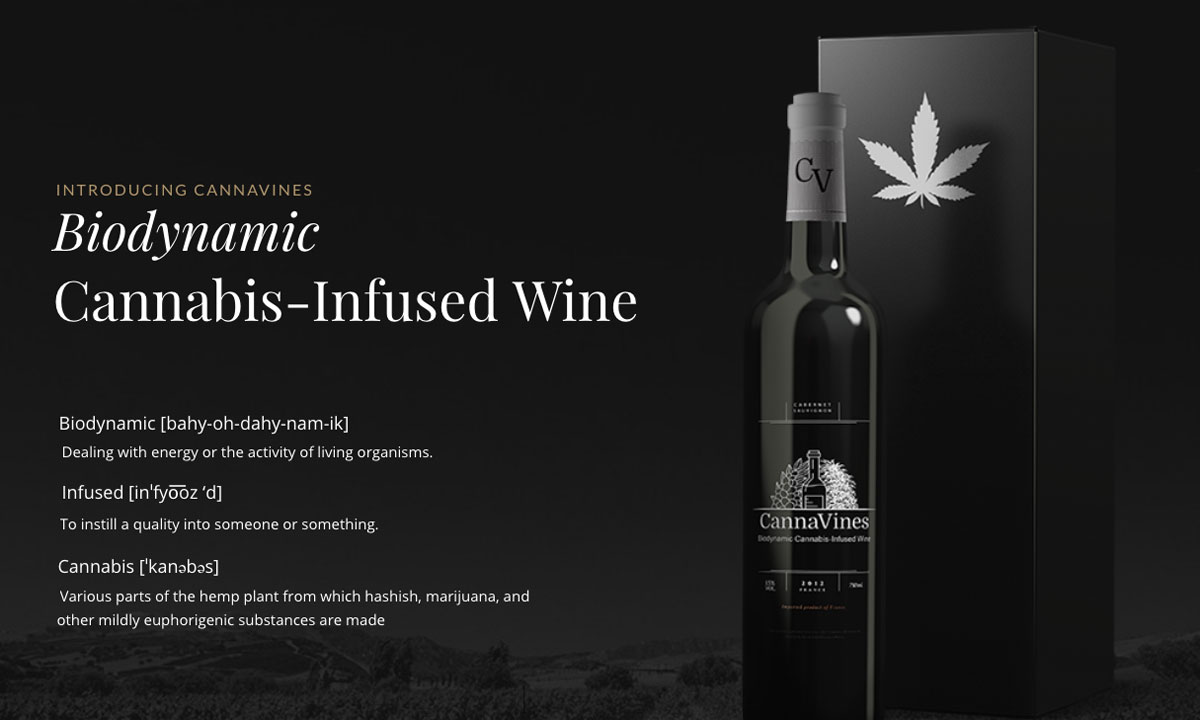 An advertisement for one of the new cannabis-infused wines.

Remember when pot was always verboten? Then, as it gradually became more acceptable, if still illicit, the one rule never to be broken: “Don’t mix pot and liquor”?

Like the shibboleth about combining caffeine and ethanol, those days are very quickly receding into the past. They will soon be over. People have learned to have a cognac and a coffee without carking it. Folks are learning very quickly to manage their own dosage. With better, more fact-based education, this will increase.

Just like we were taught for years to avoid taking Paracetamol with Ibuprofen, we are now discovering a little of each is more beneficial in many cases, sometimes even giving the opiates a run for their money in the effication stakes.

So, in an unholy melding of the inevitabilities, let’s wonder how The Wine Gourd and its like will handle the biggest new variable: how will the presence of pot influence the way in which the Jeremy Olivers, Jeni Ports and James Hallidays review, rank and describe cannabis-infused wine?

Not only does cannabis influence aroma and flavour, immediately calling for a whole new vocabulary, but its incredible range of psychoactive effects will also deserve explanation. Our critics are going to have to learn to describe relative intoxications.

The earliest Australian wine reporters, like Ebenezer Ward (1837-1917) and Ernest Whitington (1873 – 1934) reported mainly numbers and details: gastronomic evaluation was rarely, if ever, attempted. After the World War II, writers like Walter James and Osmar White began to cross over toward ranks and scores, but never quite got there. Dear Walter, for example liked referring to how well his wines “went with chops”.

It was the Len Evanses, the Ian Hickinbothams and James Hallidays, the Di Holuigues and Geraldine Pascales that tipped in the indulgence, in the ’70s recognising the synergies that arise when ethanol is included in epicurean literature.

And I mean included, not just in its material combinations like the actual food and wine, but in its interpretation, and the manner of its printed presentation, the mood of the writing as much as vocabulary, syntax and grammar.

Gone are the days when the business would wince and flinch when the likes of Evans wrote something like: “Port makes you fart”.

The next James Halliday will need to be an erudite stoner.