Bleached meadows and the dust of those ancient piedmont rocks prickled my nostrils with delight when I opened this. It’s from the old Grenache on Drew and Rae Noon’s vineyard beside their McLaren Vale winery near the foot of the Willunga Scarp. Rifle Range Road. I put the bottle aside, then came back to it to find the damn thing nearly empty. It didn’t stand a chance. Now I’m squeezing the last couple of glasses through real slow. Maraschino cherries. A light-cooked marmalade of blood orange and ginger with rosebuds. Redcurrant. By Bacchus it’s good. Drink. That beautiful gentle viscosity Drew gets stirring these ferments in his big oak vat. Long, drawing acidity and ultra-fine tannin to reflect that alluring bouquet. There’s nothing forced or dim about it: it just goes straight down the line of what rosé should be. Savoury; hunger-making. Stunning. Grenache.

This grainy old emulsional film noir has the same summer meadow topnote as the rosé in a way: that slightly acrid summer reek. It prickles. Add the plums and the Morello cherries. Jam it in real deep and you hit sweet old dressed harness leather. And there’s a waft of something old from France’s grand Madeleine Square … Guerlain’s 1912 masterpiece, L’Heure Bleue. You can still buy this transporting fragrance. A waft of the end of La Belle Époque, defiant but melancholic before all hell broke out and my grandfather had to “go and fight the King’s cousin the mud”. Oops! This is neither melancholic nor violent, but it’s terribly evocative. Licoricey tannins and heaps of slick, dry black blackbean and berries and briar … it’s dense, but jumping and lively and lithe. It strings one out. Then it wipes you down with velvet tannin. Shiraz, Grenache, Cabernet and Graciano. And it’s twelve little dollars. Ring-a-ding. There are whole towers of fancy bell-ringing winemakers who might pause to take note of this. Drew says it’s barbecue wine. Serve it cool.

Grenache 90 per cent, Shiraz 6 per cent and Graciano 4 per cent make up this whispering silky monolith. It seems so big and secure to sniff you might think you’d have to poke it with a stick but it’s still gracious. It gives. Obviously a strong plummy year for the Noon Grenache block: its bouquet is all slick satsuma, prune and blueberry along with the trademark Morello cherry. Maybe a slice of dried fig. Smoky, coffee oak with a drip of nutmeg oil … then the palate is surprisingly lithe and poised: it’s not at all gloopy, and doesn’t feel as strong as the numbers say, but just long and elegant and velvety. It’s another very convincing step in the grand march of contemporary McLaren Vale Grenache: masterly. It’ll be delicious now with aromatic mushrooms, but you’d be silly not to hide a few bottles away for a decade or so.

The estuarine location of Langhorne Creek – where Noons also take fruit – leads it to flood occasionally. This happened in 2017: so convincingly the Cabernet began to deteriorate before the water went down. So no Reserve Cab to catch from ’17 – not even a port. Ouch!

This gorgeous Shiraz, from BJ Borrett’s Main Road Block, survived, and admirably. As Drew says, it’s a wine he considers “uniquely Australian”. It’s thick with the earthy Larncrk soulfulness that led to the young Wolf Blass hauling three Jimmy Watson Trophies out of the region in consecutive years; and Peter Lehmann oozing great Metalas in those same ’70s. Somehow Langhorne Creek seemed to get lost for awhile after that: maybe the oak fashion choked its distinction.

There’s nothing lost about this. But you can get lost in it: Mississippi mudcake and then all that treacly toffee and what Drew calls molasses … dusty black tannins in that silk-and-velvet syrup … and yet once again, it’s a lot more alluring and svelte than threatening. Another one for the cellar.

As Noons quite justly sell out very quickly each year, get yourself in line for a cellar visit. They open for tasting and sales this year on Saturday, November 10, to trade through the three following weekends, 10am-5pm. And that’ll be it. 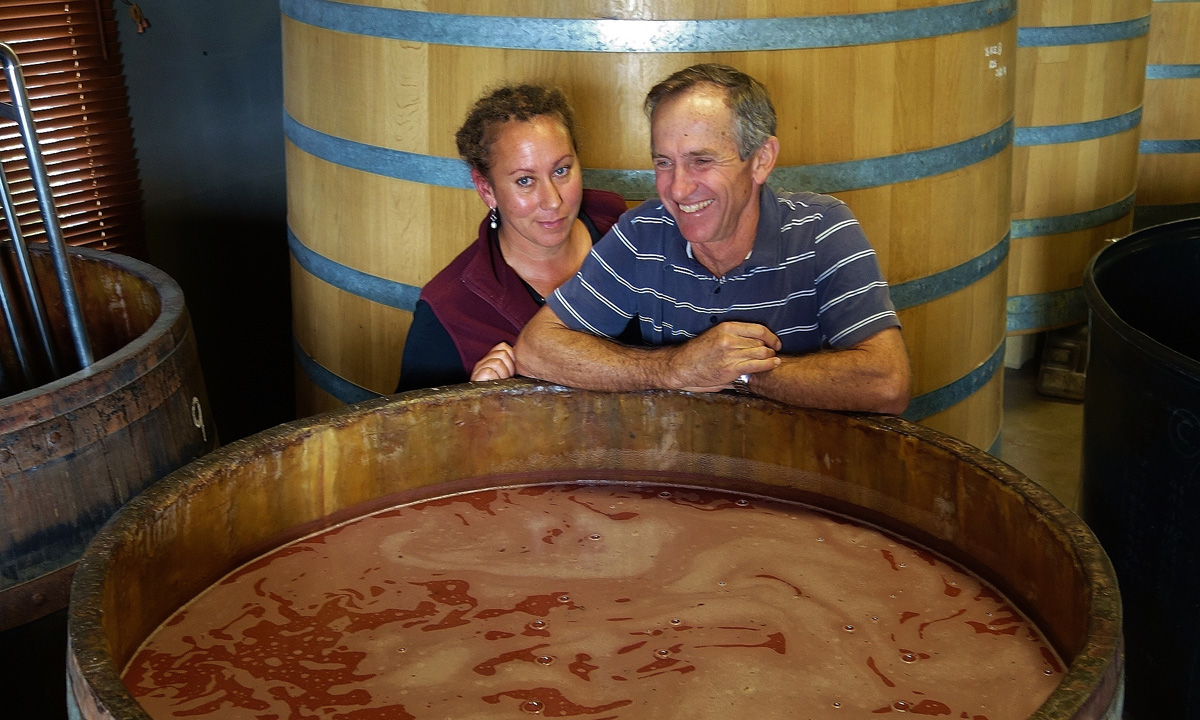