WRATTONBULLY 2015 VINTAGE EVALUATION [condensed and abridged]: Sopping winter, bone dry spring, January downpour dumps on the tight green grapes as they began to blush at veraison … hell for the industrialists vs. heaven for the hands-on … tiny punk grapes with real thick skins and nutty pips got em right between the eyes …

It seems at first Colleen Miller and Mike Cloak were poleaxed by 2015. The rollercoaster of weather that eventually led to picking was pretty jagged. Then they poleaxed it. These dudes are on top of it. They came all the way from Digital Gulch or whatever that techno joint’s called in California. Silicone Peaks.

Escaped to make top Merlot as far away from that tishy biscuit skank as they could get. Bought this prime southern ground at Wrattonbully 18 years ago and got right on with it. Introduced new clones.

Stand well back, or get right in there, I reckon. With these delicious milestones, there’s no halfway house. Go faster. Or slow down and stop. Make room. Get out, or stay in and get Merlode. And Cabernated.

If you stay in, never stick your arm out the window. We’re movin’! Expensive luxury goods like these tend to set even the smartest richest folks misbehaving fast. 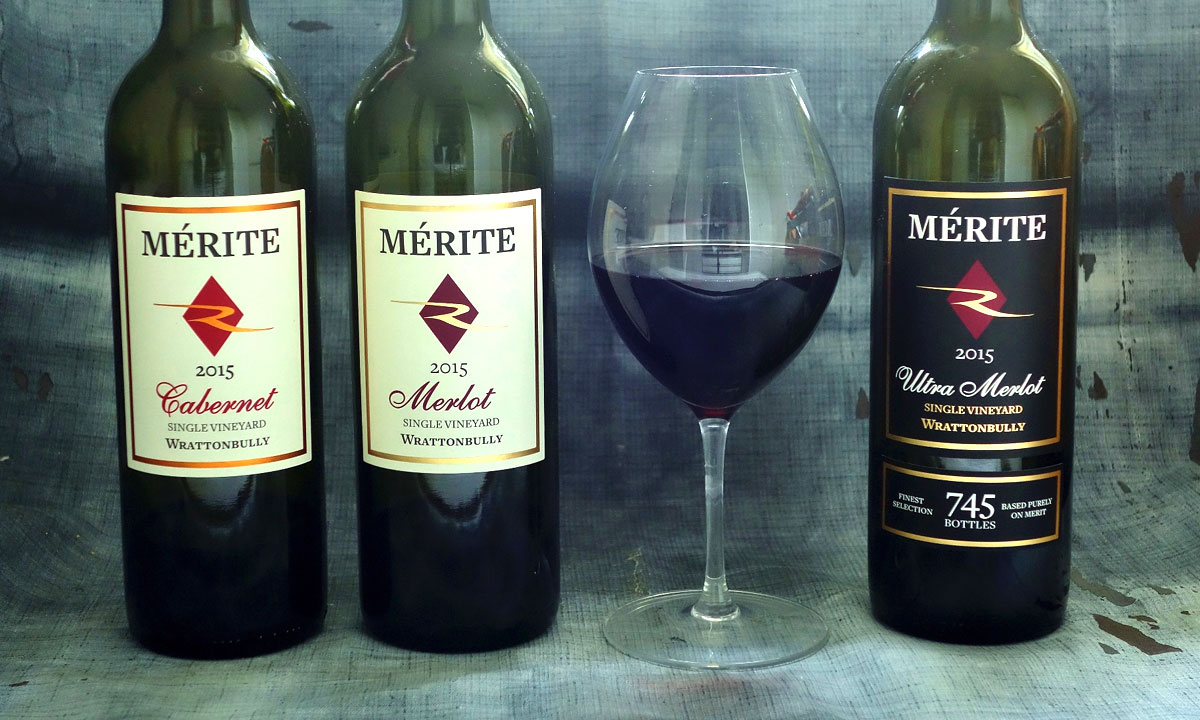 The first visit I had from this British racing green 4.2-litre E-Type came I reckon in a glass of Roger Pike’s Marius red about a decade ago. It appears rarely but quite vividly in some wines I love, parked in the shade below big Pinus radiata with Australian ravens hiding up there, watching. You can see their wing feathers glinting blue-black like snakes through the needles and cones.

Never believe a word you hear a colourblind synaesthete utter about hue but maybe you can smell the mood of it without demanding too sharp an organoleptic focus.

The Jag’s certainly in this glass, top down, shiny shiny sinister sixter ticking itself cool, adding its leather and hot lubricants to the lovely dark green perfumes of the trees.

With fruit, of course: there are fresh ripe quetsch ortenauer prunus about to turn to smootsch there on the camp table linen like there’s quark or something really creamy and light here too, with the brioche and butter. Check it out.

I believe there’s a dash of Merlot in here, which makes perfect sense. Colleen tells me it’s CW44 clone of Cab planted on a pitted rise of limestone dusted with a few inches of “classic terra rossa”, like Coonawarra to the south, but we won’t mention that.

Apart from a slight sooty seasoning I can barely detect the 50 per cent new oak. All the wood’s doing here is providing this deep raven shade for the E-Type parked in it. Don’t even ask why it’s also doused in John Coltrane, so overwhelmingly cool and hot he just launched his John Coltrane – Untitled Original 11386.

Powerfully oozing intense quartet jazz, there’s fresh ‘Trane, never before released, 50 years after his death. Immaculate. And here I am. King hit, squished, saxed, smootsched all over the place and very keen to avoid the mop.

But that won’t come out here beneath the trees into this damp clean dirt, will it, that mop?

Not with Elvin Jones drumming. Nope. Get the wine and the record. Drink them together. Misbehave. Roll around here on the bonnet in the Roquefort. Just don’t drive anywhere.

This is what the ruckus is about. Five clones of Merlot, selected by fanatics.

In Bordeaux, where it’s five times bigger than Cabernet in area planted, Merlot is the early-ripening red, so it’s the grape first stolen each vintage by the merle, or blackbird.

In the best instances of compensation, that little feathered dinosaur’s incredible song seems to give the grape extra sweet topnotes, while its constant agitated scratching in the rotting twigs and sod give the singer its primary name: Turdus.

“Oh. Do you reckon Dung will ever catch on as a Christian name, Unca Philip?”

“Nope. But at the bottom of every proper Merlot there’s plenty of this soft, mossy, ferny earth. Like shout your blackbird a bag of potting soil, turn the recorder on and let it go savage.”

At the top, among all that melodious birdsong, there’s a real generous dusting of marshmallow and musk confectioner’s sugar. Crystallised violets.

Between, there are all those fruits, like prune skins collapsing with botrytis on their own fleshy ripeness, blueberries and the comforting humanness of the fleshiest funghi: boletus, morel, enoki, shiitake …  real soft over-ripe figs …

This is gorgeous wine. It is plush and comforting company right now. It is not as tight and reticent as the dungeon-bound austerity of the mighty Blue Poles I reviewed here and is even a touch more cushy than Brodericks’ brilliant Basket Range. Which is not to overlook those deep wet tea-green/tabac tannins waiting way below like ballast beneath the tracks of all of them.

Merlot: much more than mellow

You don’t have to wait for this train. She’s early. Then she’ll roll right on through the night into the Never-Never. Two lights on behind. Glory be.

Ultra? Ultra? After the pressings of the various Merlot clones were kept separate in oak, one barrel was rejected for being a touch too bitter, leaving the other four to be blended with wine from the finest barrel of 2015 Cabernet.

To make this little parcel of joy. Goodness me. Man this is sick. This is so plump and silky sensual and deadly from the first accidental inhalation that you got no chance. This delivers an opiate hit that removes all necessity to stand. This is the vinous equivalent of Pethidine, which was dumped after too many doctors got addicted.

So sit back and slump and let it trickle on in. There’s always a lot more old drunks than old doctors.

I said silky. By bedtime it’s more like the raspy satin of grosgrain, like the bows on your patent opera slippers. You can chew it for days but never swallow it.

The more air it gets, the higher grows its wave of tannin.

The very dryness of which makes everything worse. Forget it. You wouldn’t like it. It takes too long. You won’t have time. Leave it with little old shoe chewin’ me … I’ll look after it … only a bottle a day for two years … yum … Church’s opera slippers with Roquefort and Ultra … if you get past the ‘Trane catch Maria Callas doing Ebben! Ne Andro Lontana from La Wally and you’ll stop chewing her shoes.