First time I saw Tim Geddes he was standing in the gloom in the back of Wayne Thomas’s winery on McLaren Flat Road. I was there for a tasting – the mighty Thommo wanted to pick my brains over one wine or another. He’d collected me first thing in the city, handed me a stubby of Cooper’s Ale and a smoke, and off we set, southward.

The McLaren Vale pub was not officially open, but we snuck in the back door, attacked more beer and another pack of smokes while Thommo emptied his wallet into the gambling till. Friggin nags. Never happy till he was up to his ankles in betting slips.

We reached the winery at about eleven and Thommo got this bloke he called Tim to bring samples for me to taste. Your actual red wine. Beautiful red wine.

“Bloody top winemaker, Tim,” Thommo assured me, as if he had nothing to do with it. “Bloody Kiwi. Helped get me two Bushing Crowns. And the Perkins trophy. Want another beer. Whitey?”

Now the lovely crazy Thommo’s long dead, and Tim wins trophies for himself. He’s married to Amanda, a chef, and they’ve got two great kids and a new winery and tasting room they call Seldom Inn. It’s deep in the belly of McLaren Vale’s latest glam discovery, Blewitt Springs.

Which, as your actual geological region, serious white locals have appreciated for over a century. Before they arrived, the Kaurna must have revered it for its food and shelter. Before that it was significant for the 50 million years it took to take shape atop the billion-year-old bedrock way down below.

Tim and Amanda offer a great range of local wines, including some brilliant single-vineyard selections. There’s a long queue of vendangeurs wanting to work there through vintage as Amanda matches the lunches to the wines.

Darrel Hunt’s Le-Fleurie vineyard is in Maslin Sands at Maslin Beach. Darrel lives in the original Maslin’s cottage. On top of that deep rusty coarse-grained sand there’s a thin layer of clayey loam with odd scraps of calcrete and some very happy Shiraz. 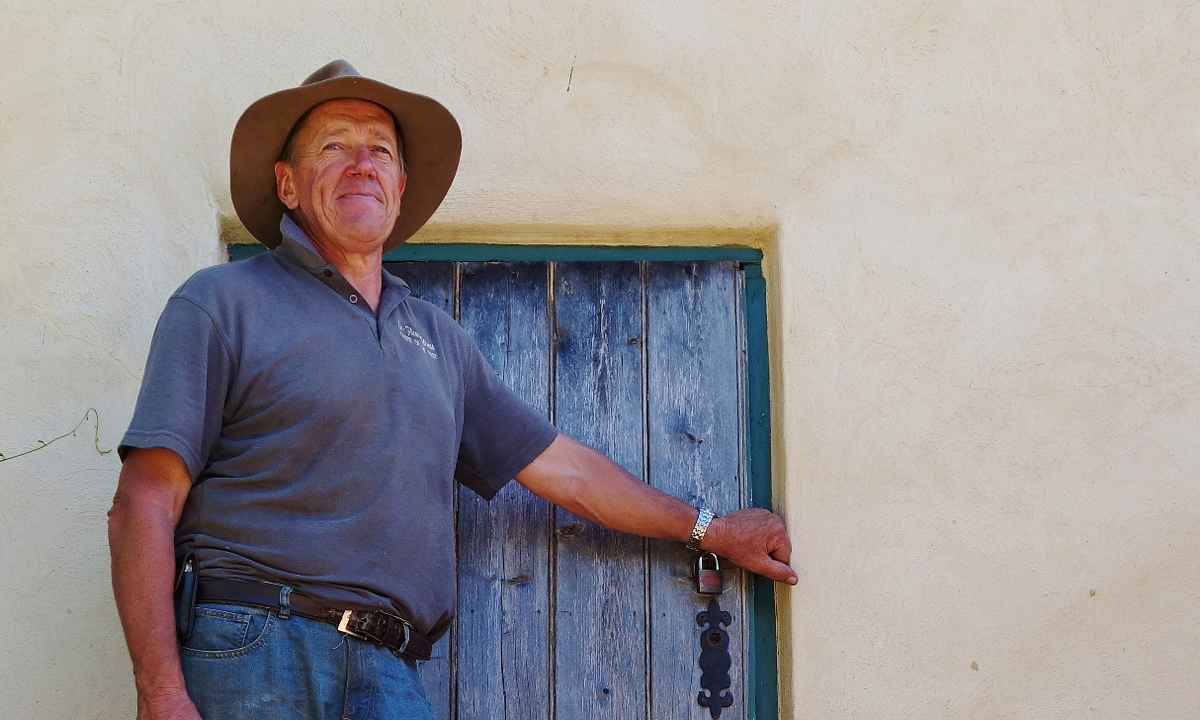 Grape grower Darrel Hunt at the door of the original Maslin cottage, where the Hunt family has lived and farmed for over a century. Photo: Philip White

If made like everybody makes wine, with the conventional barrels and the conventional ideas, the Le-Fleurie wine reminds me of Coonawarra. But Tim made this in a posh 3000-litre French oak foudre, or very expensive, very old-fashioned tank. In place of the usual simple berry fruit, this gives the wine a leaner, tighter look. In fact, it seems to wind the volume of the ferruginous bit of the sand right up: in some ways, it smells like a forge, with all those whiffs of hot coke, tar and iron … even the smithy’s leather apron gets its nose in.

So there’s no shortage of complexity or interest here. Or brilliant Shiraz fruit picked at a sensibly modest baumé. Take a slurp and you have this tight, athletic, strapping red. Its modest alcohol keeps it lissom and bright, despite its deep garnet snarl. It’s whippy and strapping, and reminds me of the St Henri Clarets of the ’60s and ’70s.

To drink right now, it’s a little like the reds Stephen Pannell makes in his very big oaks; tending to modern Spain in style. Let it have a few years in the dark and it’ll drag you back into those gentle old-style St Henri Clarets, made in big wood tanks, not sappy new barrels like Grange and 707, and at much lower alcohols than those Penfolds of the ’70s and ’80s.

Iron-rich – ferruginous – loam over calcereous clay near Torresans’ Winery gave this fruit, which Tim thought deserved some new tight-grained French barrels. He chose puncheons, the largest of the conventional barrels. So we have another tight irony bouquet in which the oak seems in a way to counteract the prickle of that higher alcohol. But the fruit aromas here are right down the Blackberry Nip/Ribena alley and there’s not much sign of raw wood at all: the grapes have eaten it. 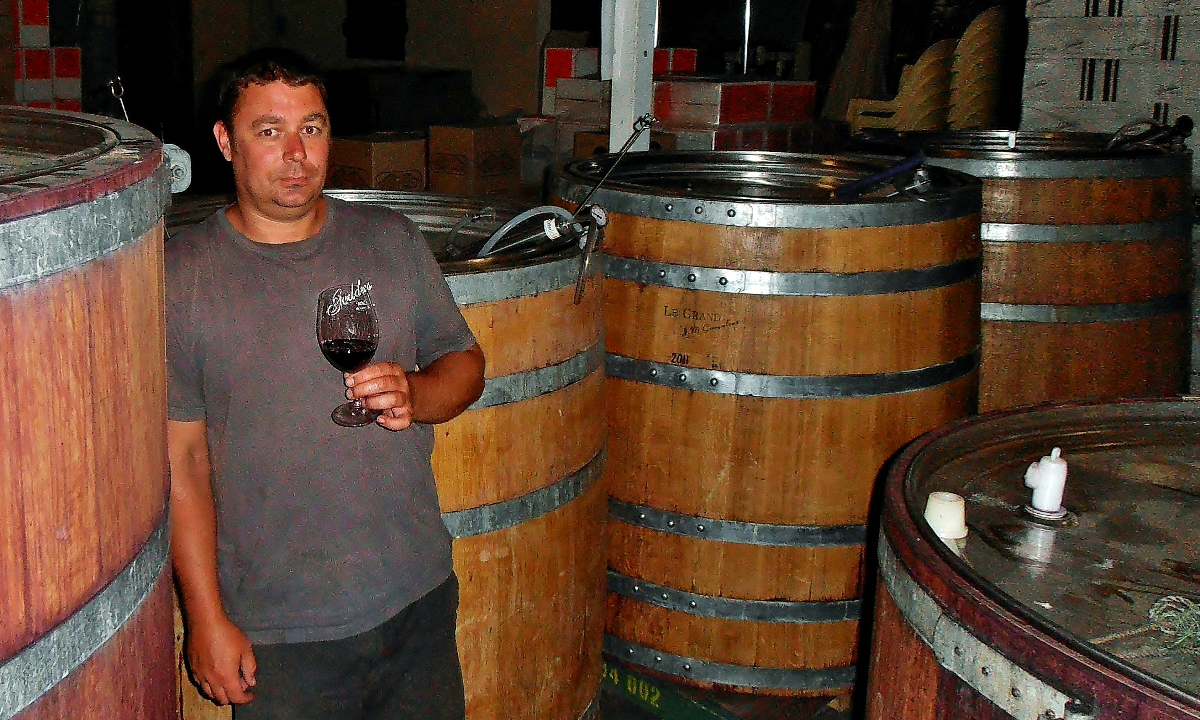 As hinted in the Maslin review, the smaller new barrels seem to preserve the berry flavours, while the cheeky bare-faced juiciness of the fruit overwhelms any simple new barrel sap which would be more obvious with grapes of lower quality. Or indeed even smaller barrels: hogsheads or barriques.

So. A bouquet verging on the sinister leads to a mouthful of healthy fresh fruit, fleshy and vibrantly bright. It’ll live for yonks, but this is a wine I will prefer to drink in its youth. It’s fun. It makes me smile.

73-year-old bush vines in Blewitt Springs popped this baby out. The unique geology of the Blewitt gullies is confusing: way down there’s the same coarse Maslin Sand that underlies Le-Fleurie, twelve kays away on the coast. On top of that in Blewitt Springs there’s a layer of conglomerate ironstone, sometimes massive slabs of the stuff, as well as pellets the size of grapeshot.

Then there’s often some clay and on top a layer of white-to-grey aeolian sand which the wind blew in during the last few thousand years.

This sand is mobile: remove the vegetation and the sand moves.

Tim made this in a foudre, but included one new small barrel’s worth in the final assemblage “for structure”.

It, too, takes me back to the smithy, with all its dark gunmetal glints. Fruit? Think of the darkest, bluest, tiniest things like juniper. All those lovely little red things your Mum said were poisonous. This bouquet will take a decade to unfold. Use a decanter.

But the flavour? It IS a drink, and it’s a very dangerous, easy slippery slide of a drink right now. It’s wickedly delicious, with the bitter pickled cherry we’re finding more and more in the new generation Grenache wines grown in those sands.

It’s delightful in its elegance, but also gives real meaning to the word ravenous, the restless driven hunger of the raven. In this instance it also indicates that scary black-blue gunmetal hue. And mood. I’d be careful who I shared it with: if they had the faintest glimmer of this in their eyes I’d be a goner.