Maybe I was wrong again. Jeez. Too much wishful thinking …

I usually suggest that some hi-tech might be nice.

If the hipster yearning for vinous antiquity stays firm, and it can’t be Bob Dylan clicking a Strat into a Twin Reverb and rockin’ into Like a Rolling Stone before Pete Seeger or some luny firm zealot chops the cables with an axe, the new wine wave could even be retro hi-tech, like Kraftwerk, no? At least that has some rhythm, and South Australia has a German culture. Ask the tourism commissioners. Ask Nick Cave.

But nah. The next sommelier-driven lunge of wine fashion is a lot damn hotter than that. And older. It’s volcanic.

Influential McLaren Valer Rebecca Hopkins reminded me of this lurch with a link to her buddy Peter Weltman’s wine-searcher.com piece, The lava lover’s dream.

Working out of San Francisco, Rebecca is the communications strategist at Michael Mondavi’s Folio Fine Wine Partners, formidable shippers of many premium Italian wines from volcano country. Among others.

While I’m sure Bec wouldn’t be the type to put all her vinous eggs in one such explosive/runny basket, I can’t help thinking that if it’s volcanoes that make the difference, she shoulda stayed in Australia.

Australia has volcanoes and volcanic geology from arsehole to breakfast. Take the eastern coast and its ranges. Some of those rocks erupted as molten sizzling goo onto the bottom of an ocean about 520 million years ago. Australia wasn’t even here then.

Queensland’s Granite Belt is built of crystallised magma that cooled and solidified about 240 million years ago, but never kissed the sky until erosion exposed it about 50 million years later. Good wines there.

Forget cheese for a moment: Imagine the Earth as a huge bowl of stew. You know those big globby bits that form on the top if you don’t stir it? How they’ll move around and crash into one another, build up, or just plain sink, or boil away? That’s the Earth’s crust. We ride on that. Its buoyancy and movement is all about its composition, surface tension, and the great swirling currents in the molten magma and its temperatures beneath.

Since Australia bounced off Gondwanaland about 132 million years ago, to bullishly head back north at about 75 kilometres per million years, a great swathe of its east coast cruised over a very hot spot in that molten liquor below.

This pushed a string of zits up through the skin. Speaking generally, these cool, set and age as their piece of crust travels north past the hot bit. So the northern ones are older and colder than those down south: Very far south, in the case of Australia’s only erupting volcano, its tallest mountain, Mawson Peak. That beauty’s on Heard Island, just 1500 kilometres short of Antarctica in the Southern Ocean.

Which is not to say the mainland volcanoes are, as they say, “extinct”. At best, those in the vineyard country in South Australia’s south-eastern corner are barely dormant. Mount Gambier popped only 4500 years back, while European humans were learning to mine and meld copper and bronze and Mesopotamia was inventing the plough … 45,000 years after people were conducting ceremonial burials at Lake Mungo.

There are about 400 small volcanoes of a similar youthfulness between the Mount Gambier/Mount Schank complex and the City of Melbourne, whose old buildings are almost singularly made from cold grey volcanic basalt.

Of course such hard-set lava is not much use for grape growing. But soils made from its gradual deterioration through weathering, like those of Beechworth, the Bellarine Peninsula at Geelong or the Mornington Peninsula, are usually ferruginous – rich in iron – and very fast-draining.

As are the vast fields of dust and ash some volcanoes blast across the countryside through incredible explosions that occur when the lava coming up hits a water aquifer, which happened at Mount Gambier. Ka-friggin-boom! Volcanic wines everywhere!

My first volcano with grapes was at the other end of that same “Newer Volcanic Province”, at Mount Anakie, sticking out of the flats near Geelong. Ian and Judy Hickinbotham had bought it from the Maltby family; their eldest son Stephen Hickinbotham was the winemaker in the early ’80s.

To me, Anakie was like the classic cone-shaped volcanoes you’d see rising out of the desert in a Donald Duck comic. If you’re old enough, you’ll remember: Donald and the nephews getting their feathers singed while the American natives rode past, feathers intact, saying “Ugh”.

The Anakie vine rows went straight up the hill. Each night, the heart of that cone-shaped mount would hold its warmth, so a cartoonish corona of mist, a perfect halo, would form around the peak, ensuring an even botrytis cinerea strike at the top of each row, across all the varieties. Even the Cabernet would have a 10 or 15 per cent botrytis strike. Stephen, a Bordeaux and Burgundy-trained genius, said you couldn’t make a good red without botrytis. His were bone dry, contentious and stunning. 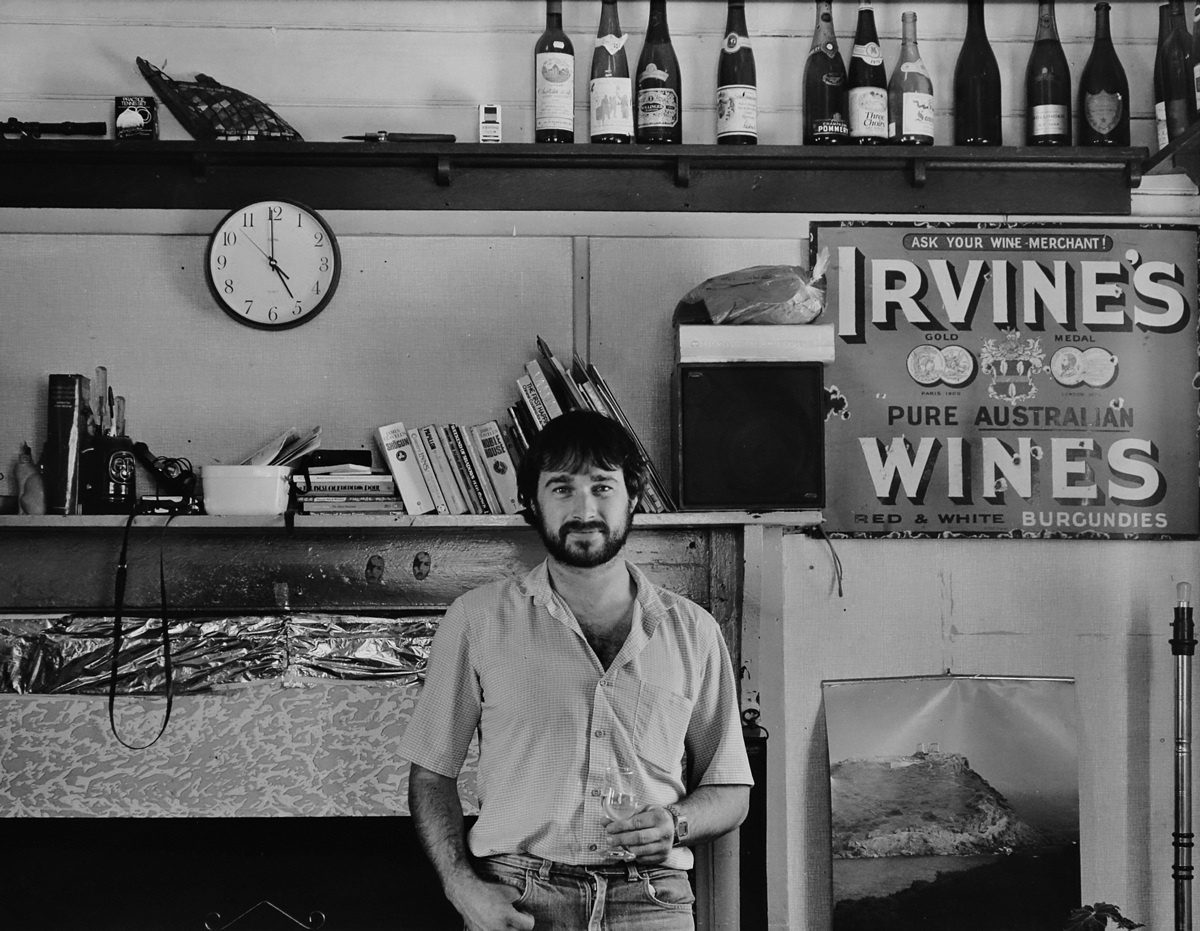 Stephen Hickinbotham in the kitchen on the Anakie volcano in 1984. Photo: Paul Lloyd

Stephen and his beloved partner Jenny O’Regan and five other mates were killed in a 1986 plane crash. His brother Andrew and sister Jenny were as highly respectful of the values of volcanic loam as he’d been. Together, they’d assisted the likes of Bails Myer establish pioneering vineyards in the same sort of loose red volcanic stuff on Mornington Peninsula, where Andrew and Terryn have their Hickinbotham Dromana winery and brewery.

Maybe their move across the Bay was smarter than it first seemed: Emeritus Professor in the School of Earth Sciences at the University of Melbourne, Bernie Joyce, regularly warns that volcanoes as young as Anakie could quite suddenly become active zits once more.

“These are scoria cones, they are young volcanoes,” he says, “the most common and smallest volcanoes … about one and a half million years old … there might be a new volcano. It could be a scoria with lava flows or a deeper crater like Mount Gambier and Tower Hill which produces ash. We don’t need to hold our breath but there could be a volcano eruption in the next century.”

Which there won’t be soon in South Australia’s other vast volcanic region, the Gawler Ranges, south of that great outback salt pan, Lake Gairdner. It’s the country of a mixture of Barngala, Kokatha and Wirangu people.

Neither will there be any vineyards there soon. There wasn’t any single explosive eruption there that we can tell, but about 1.5 billion years back a great release of red-hot molten goo just oozed up and covered enough ground to make a spectacular national park on the country of those good people.

She’s pretty much solid volcanic rock up that way.

Same 1700 kilometres west, at the other end of the Bight in the ranges north of Albany. At least there are some deliciously fruitful vineyards there in the loam surrounding the mighty Porongurup, granitic exudations that skwoze out from below, all along the line where Australia first crashed into Antarctica. Granite Island. Remarkable Rocks.

Volcanic wine? Bring it on. Bung in a big Pinot and Chardonnay fizz joint on Heard Island. Straight up the side, like the old Anakie. The snow will all melt soon. But it’ll still be so damn chilly there that all the wine will cold-settle very quickly and efficiently, so it’ll look like something clean and bright outa the fridge. Professional.

That’ll be closer to Kraftwerk than your cloudy unmade murk. And volcanic.