It’s always amusing – sometimes infernally irritating – observing and learning the changing signs of the seasons: making their measure. Since the usual autumn frosts and fogs are returning to this neck of the woods, bringing some reassuring regularity, the lack of accompanying rain seems more obvious and unsettling.

Nowadays, I know the last of the major ferments are being pressed off their skins when I see the Yangarra fence man come past, tightening the wires before the ewes are brought back to eat the weeds and grasses. They keep things neat during their winter pregnancies and the vines’ dormancy. They will have delivered their crop of lambs before the first raw shoots of the 2019 grape crop begin to poke through.

Selling fat lambs raised on biodynamic vineyard pasture sure beats writing that fat annual cheque to the local Roundup peddler. And it saves me writing about the sinister influence the old-style petrochem regime has on environment, climate and health.

Why this obvious step back to the future took viticulturists so long to grasp still confounds me. Humans! Brash rote fashion and the vignerons’ reluctance to fence vineyards seem to be the main roots of their recalcitrance. Given the new awareness of biosecurity and the ease with which threatening vineyard pests spread now, the initial cost of fencing seems an irritating essential.

It’s a bit like netting the vines to beat the gourmand birdies: when that rather obvious solution finally began just a few years back, vignerons everywhere shook their heads at the thought of the extra work and expenditure. It seemed/seems that the old 12-guage would continue to do the trick keeping the yields up thanks very much. What’s a few feathers between friends?

To say the least, the 2018 avian behaviour has been quirky. Once the netting was rolled up and packed away for this harvest great swarms of lorikeets – many more than usual –  arrived to forage for leftovers. The falcons who tend to go elsewhere to feed while their usual prey vacates because the netting’s up gradually reappear to move those noisy flocks along.

There has been more pack behaviour in birdland this year. It seems the ungiving dry has forced them into bigger, hungrier swarms that move across the country to survive. They’re starving. Refugees. Like the roos: the mobs are twice the size of the usual.

While the nets were up, the regular field magpies, lapwings and plovers ruled the roost. Crowds of ravens came and went. Apart from the odd rosella looking for holes in the netting – to get in, then get out with a gutsful – the middle-sized and smaller birds went elsewhere. Since harvest, these have returned, but seem to do so in bigger, more itinerant and panicky flocks. The population profile changes every day. There is much reshuffling of, well, pecking order; more than usual. More desperation.

The furtive currawongs are back, studiously dining on earwigs hiding in the vine bark. Maybe the corvids – currawongs, ravens, magpies – are the least upset, although the mobs of ravens also seem to be bigger and more restless. 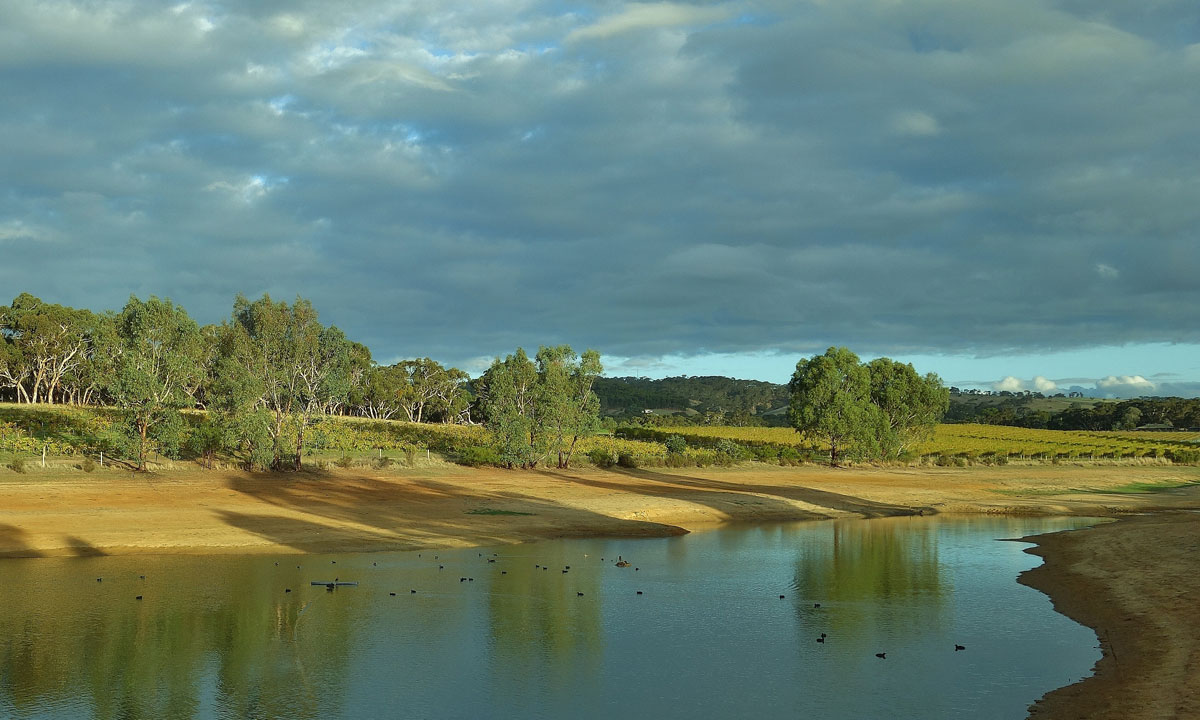 There’s still some water left for the Eurasian coots, despite the dry year. Photo: Philip White

One day there’ll be mynahs everywhere, trying to take over; then rufous wattle birds. Even the water fowl on the big dam seem restive and disturbed. I’ve not seen the usual Siberian sandpipers fattening there before their big fly home but there’ve been a few dotterels on the banks. The usual coots, water hens, ibis and herons have been visited by more scarce and unusual wanderers, even pelicans calling in exhausted on their way from the shrivelling northern waters to the Murray estuary. And the odd black swan. Overnighters.

I can tell the night-diners – bats and owls – are busy because there are no orb spiders; no twangy webs in the mornings.

Enough of the skyfolk. One of my regular indicators of vine health is the time the leaves hang on after harvest. Leaves yellowing and falling before harvest indicate tired, stressed vines. This year, even the more conventional, industrially-run broadacre vineyards seem to be holding their leaf longer than usual, around these southern vales at least. Photosynthesis continued well after picking.

From the ferments I’ve seen, the aromas and flavours of 2018 are very good. I expect some true delights.

The yields seem to have been down a tad – the bunches were healthy but more open – and winemakers are talking of a lower juice-to-weight ratio than usual, which means less wine but more pulp, colour, natural preservative and flavour. 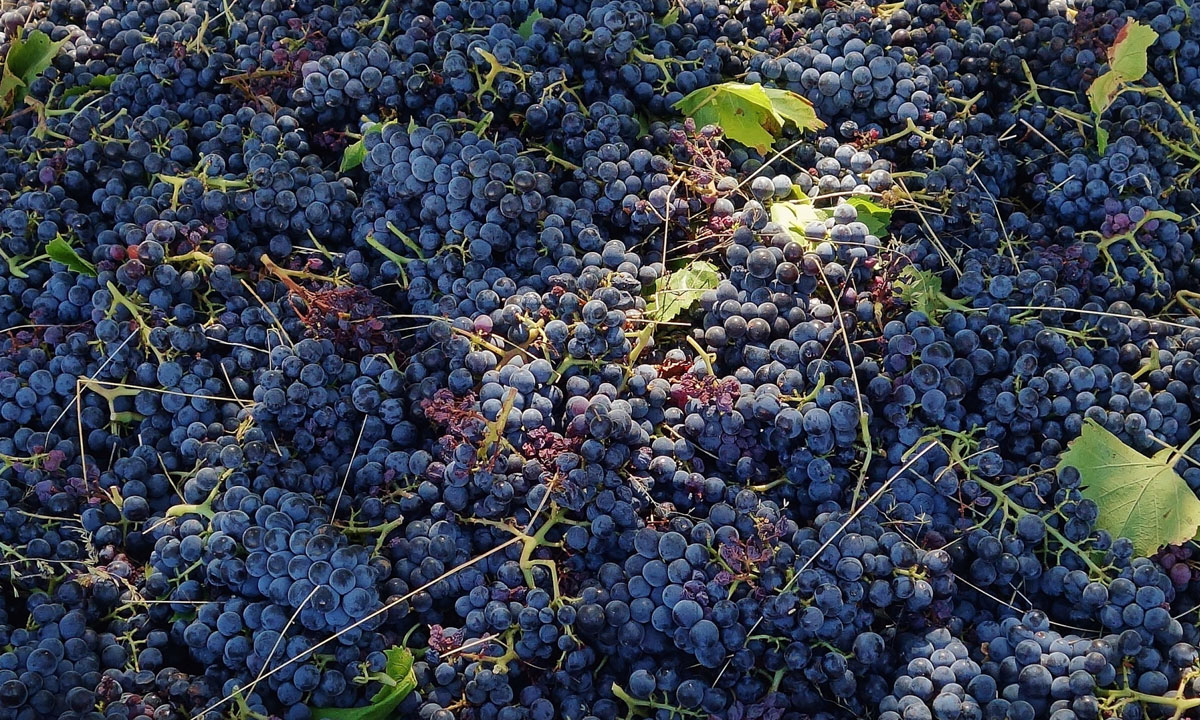 Since winemakers are now permitted to add water to over-ripe juice, bringing the alcohols down toward 13.5 per cent, cynical vendangeurs claim that the more brutal vino-industrial operatives are abusing the spirit of the law. Leaving grapes to hang longer than usual in the expectation that later admixtures of water and flavour sophisticators will smooth things over and keep eventual volumes up might make sense to some, but I know which wine I’d rather drink.

It will be fascinating to see how these legally-diluted products eventually look in the glass. Lower than regular alcohols will be an improvement across the board, but, as usual, intelligently, sensitively-managed and harvested crops and tanks with fewer additives will be the first to lure this little black duck.

So? Expect the best vignerons to market some utter pearlers from this year, and perhaps better-balanced, less gloopy and threatening jam bombs across the rest of the business. It will be fascinating to see.

However, the doubter in me worries that this vintage, if indeed it’s generally of better gastronomic quality than average, will serve perversely to convince the climate-change sceptics that there’s nothing to worry about after all. There are still many key figures in charge of this business who adore the reassurance of their guru, Dr John Gladstones, who wrote in his Wine, Terroir and Climate Change (Wakefield Press, Adelaide, 2011):

“How much warming, then, can justly be attributed to anthropogenic greenhouse gases? Taking all evidence into account, the proven amount is: none … from a viticultural viewpoint we can conclude that any anthropogenic changes to mean temperatures will be small and, for some decades to come, unlikely to have major effects beyond those of natural climate variability.”

Natural? Maybe we should go ask those desperate, panicky birds for their opinion. They were here first.