It was the size of the Pears Cyclopaedia, or maybe Gray’s Anatomy. Two perfectly square-built storeys of white vienna bread stacked up there with cold ham, tomato, heaps of black pepper and butter.

I had no idea they made white vienna loaves so big: The mass of the thing in all its whiteness made the thin crusts even less noticeable. With a strong flat white to double the effect, jeez it was good.

The writer was sitting on the site of what was Tree and Leaf, the first fair dinkum hippy cafe in the Hills. Macka and Margie ran it in the early ’70s. I reckon the first sourbread rye to grow outside of Hahndorf happened there.

Breaksband would bust loud thrashy gigs in the hall next door in the days when Gulpilil was known to sit in on didj. We’d be lost in some interminable Neil Young-ish-Allmans-Dead distortion when Gulps would peal in with “Hey Jude” and all the dingo howls and Kakadu bird calls he could squeeze out of that hollow tree. Shivers. Shoulda been more of it.

Sitting there at the Crafers Gourmet Deli last Saturday, gazing across at Ed Peters’ Crafers Hotel, lots of this stuff came swirling back. That was the pub where I dined with Richie Hayward, the Little Feat drummer, after their last gig in a three-month world tour in ’79. Sick of greasy road food he asked the incredulous patron, Spencer Binns, for a carrot, indicating with his gnarly drummer’s fingers something about the size of shoe box. From that high temple of the mixed grill, one fresh foot-long carrot quickly came on a posh oval serving plate. Condiment set. Knife and fork. Napkin.

I’m sure you could get a good carrot there now, but it’d probably come decked with gorgeous bone marrow glaze and a Burgundy worth more than the roadie van we bought from The Keystone Angels that blew up on the first bit of freeway completed right there outside the back door.

I was en route this time to The Festival at Basket Range, a guest of pioneer Basket Range vigneron Phillip Broderick.

A few other hostelries have morphed: I noticed when we got to Uraidla that the Aristologist (now The Summertown Aristologist) had re-emerged in a different shop on a different corner only about 35 years after Michael Symons and Jennifer Hillier staged the first Adelaide Hills Wine Show in their original Aristologist down past what is now the freshly re-Petered pub.

I adjudged Broderick’s Basket Range blend to be after the St Emilion Bordeaux style on the day.

The First World Crisis was wondering which of the squeamish hosts would scone the live trout with the Sabatier handle before giving the poor beast the heat. Lots of wincing in the service of fresh. 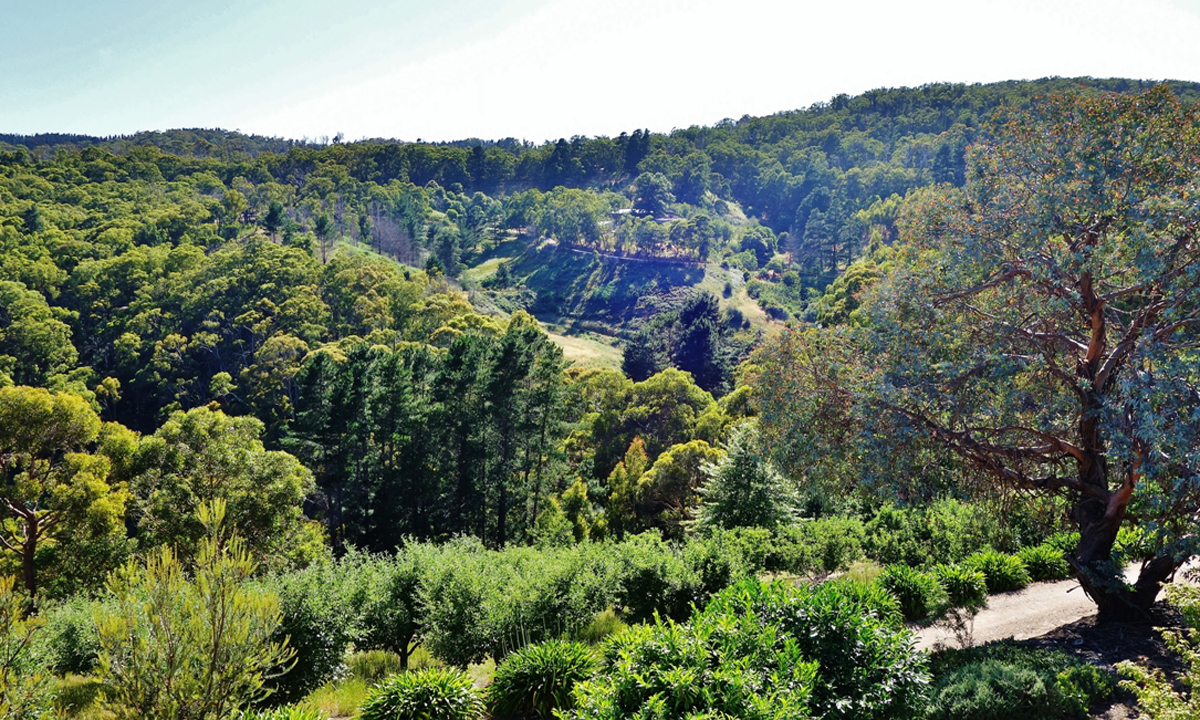 Just as this bonnie sunful Saturday brought mindful winces from those ’70s: corners not quite taken; helmets full of gravel; biffo not avoided; too much everything; funeral after bloody funeral; interminable visits to Intensive Care and the Coma Ward. Which is not to even mention Ash Wednesday. Faaaaaarrrrrk. In place of the sly deceptive acronym with the post and disorder buzzwords hiding in it, I’d just as rather call it shell shock and get on with trying to outlive it.

The Basket Range Oval is on the top of a hill, on donated levelled land. You could feel like flying free there if there is no fire. That basket of ranges is well-stocked with shiny raptors on the wing. But if there was a hot fire, imagine sitting on a 400m chimney.

Saturday was just perfect. Sunny, still, balmy. No giant bats or manta rays. No smoke. But my memory would preclude me from living there.

The euphoric Basket tribes gathered much as we did at the Myponga and Meadows Pop Festivals a lifetime before, without the overt illicit hooch, liquid, smoked or dropped. This was polite. Cool. All the people were real healthy and happy. Eager. Curious. Spending good money. And the sound system was much better.

There were no vineyards in the ’70s, but there’d be kegs of beer, bottled cider, and smuggled spirits at the big outdoor drink-ups of the day. Like the Schutzenfest on the Hahndorf Oval, a faux Austrian vinylhosen love-in which happily combined the consumption of lakes of beer in the sun with oompah brass and the incessant firing of high-powered rifles.

I recall a show somewhere in the blazing sun where the Seppelts people were selling dixie cups of Great Western Brut Champagne sorbet right beside the Cooper’s Stout tent, where they poured their black stuff into plastic schooners. Thus was invented the Black Velvet Spider. One scoop of sorbet per stout. Bitter mocha. By Bacchus, that worked.

We also bought fortified cherry moonshine in Corkscrew Gully when we were lucky. It was a clean, filtered product, or at least properly cold-settled cherry wine stopped dead on its lively feet by a good dose of ethanol distillate and sold in the half-gallon flagon.

And there was always Cobbley’s Cider Blue Moose to consider. A sideline to their mad lumpy scrumpy, this was a filtered aerated cider containing a skyful of blue dye in a fizz bottle with a plastic fizz stopper wired well down and a blue moose on the front. I presumed the blue was there to hide the brown polka dots or whatever the fake mousse naturally had in it at the time.

That great gastronome and critic John McGrath/Howard Twelftree, central Hills dweller, taught us to have Blue Moose in big Burgundy balloons on ice with a good shot of Cointreau and a smacked mint leaf, but you wouldna wanted to get caught drinking that in the open, for fear of sexual deviancy or communniss allegations.

At least Howard was officially nuts. And he seemed somehow, impossibly, genetically endowed to handle fluently that spaghetti mess of crazy roads and goat tracks pissed in a Mini with no brakes.

Anyway, there we went to last weekend’s festival, sober as judges, Broderick and White, to the top of the hill, where it seemed one’s entire intelligence and sensibility was suddenly being squashed through a dodgy neurovalve switchwork into a serious full-bore White Alert. Phillip was cool but I had a screw loose. Phillip looked really worried. I felt scared and confused. Without one wine, I’d managed too much disco. Spinout.

While Phillip found a kind doctor and a chair in the shade and I stood swaying on a guy rope certain that everyone thought I was overdosing or something I noticed a venerable bloke standing some metres back, leaning on a fine shooting stick, looking at me with what I first saw as impertinence. Chairs came. He sat down. It was Richard Farmer. Just trust me when I say we have met in some very strange places since he was a big Farmer Brothers wine merchant, Canberra guru, and press adviser to Prime Minister Bob Hawke while I lived in the convicts’ quarters out the back of Peter Doyle’s old Harbourmaster’s House at Watson’s Bay.

Richard understood how I felt. I tried to explain my white drug-free breakfast but gave up when I realised I had a glass of Charlotte Hardy’s Semillon in my hand because it smelled good. It wasn’t a prop or a drink. It was my organoleptic jumper leads.

While I was too ill for ethanol, grrrrr, I noticed that the numerous vendors offered many unmade wines, but there among all the Old Order Amish and Neo-Mennonites remain the likes of Henschke.

And there was ginger beer, great coffee and many tasty morsels. Rick Burge, taking the piss, but helping me. A coupla stray scientists. Mates from the US, Japan and McLaren Vale. Damn! Fine mobs.

Which demands a word about mobs. In those Vietnam demo days, there were many hippies. Often, but never always, these gentle folks had wealthier parents and lived at the ends of ivy-hung lanes.

My lot were hillbillies, which were different. We came in Fords full of Bibles and shotguns. We graduated outa that.

So what’ll be next in cult wine fashion? Punk? Disco? Hi-tech?

Before Rick and Phillip cryovacked me off that happy, peaceful ridgetop I couldn’t help muttering to somebody that there were no obese people at the Basket Rangers festival.

This is not Yellowtail. Hallelujah! Peace in the valley.