On February 15 a subcontractor machine-harvested the big block of industrial vineyard on the flat clay across the track from me. Shiraz at what somebody said was 15.5 baumé. In other words, 16-plus alcohols.

I thought it might have been a bit more. The flavours were cordial sweet and simple. It was clean, but it wasn’t very good.

Bacchus only knows where that fruit went, if indeed even he knows. Probly jacked with sawdust and tartaric and called “Jellifluous” or “China Thing” or something by now. Hungry Dan’s.

Today is the late afternoon of March 19 and another outfit’s rolling up the bird netting on the Ironheart Shiraz, between my cottage on the slope and that vineyard already harvested on the flat. The two are only about 100 metres apart, but in comparison, this organic and biodynamic fruit on ironstone looks like about a third of the neighbour’s yield but holding a great deal more complexity and some lovely acid.

They’ll pick it early in the morning, before the birds discover the nets have gone. It’ll sell for $100 more than the other one. Per bottle.

Which reminds me of the new conservative government lurching into power in the middle of harvest.

Pretty good outlook for some winers: Turnbull’s Marshall-friendly Feds are stacked up already with $50 million of taxpayers’ money disgraced former deputy prime minister Barnaby Joyce left behind for Wine Australia to give away. It’s to help run export tastings and build extravagant new cellar sales outlets to attract people who drink. On the announcement, they offered special financial encouragement to the Murray-Darling Basin. Whose growers nearly always make a loss.

There’ll be deconstructed Rubik’s Cubes and reconstructed shipping container Tortilla Flats architecture all the way up the lazy river before you know it.

I was in that Riverland a few weeks back and was surprised to discover many vineyards unpicked as the weather had cooled and greyed and the grapes weren’t sweet enough to mine for their sugar. No worries. Apart from the global-warming-denying conspiracy theorists. This morning I read Henry Crawford, big Riverland grapegrower, defending his beloved region in Wine Business Monthly:

“It’s as if the climate change debate is a massive conspiracy from the Tasmanian Government to get everyone to move or invest there,” he writes. “I agree with Jeffrey [Grossett]: SA wine is better than ever and I think we have a very sunny future, pun intended.”

Everything seems to be going well for Henry, who believes that as things get hotter he needs less water:

“Production-wise we are growing more tonnes on a per hectare basis than ever before, our costs per hectare are lower than ever, and it’s worth noting warmer, drier seasons reduce disease risk (less sprays and chemical) and the early harvests reduce water consumption,” he wrote, before suggesting the world loves premium warm-climate Barossa.

Which, like Grossett’s, I suggest is generally a different sort of a drink to Henry’s River. The Winemakers Federation of Australia records 82 to 94 per cent of the Riverland crop from 2012 to 2015 being grown and disposed of at a loss. In the same years the Barossa figures show 28 to 50 per cent loss; McLaren Vale, 27 to 34 per cent loss.

This is where a thing called “quality” comes into the account.

Hey Henry, in the same years, Tasmania was 99 to 100 per cent profitable. Ask winemaker Stefano Lubiana. When did he leave the Riverland for Tasmania? Thirty years back? Is he happy?

Among other things, Peter Lehmann used to say: “It’s a beautiful vintage, Whitey, but nowhere near as good as the next one.”

So far, it seems that this particular year could be even better than next year.

I’ve not heard him recommending Henry’s River but Jeff Grossett’s raving about Clare Riesling; I called David O’Leary from O’Leary Walker for another opinion. Yep. Almost smug. “Pretty good,” he said. “Like 2008.”

At Paracombe, atop the Torrens Gorge in the Adelaide Hills, Ben Drogemuller guardedly gurgled with similar glee. “Lower baumés, better flavours,” he said, also agreeing with Hardy and O’Leary that Chardonnay, whether for still wine or fizz, was also of very high quality. Pinot fizzbase is deadly, too: perfumed and crunchy.

Everyone, from one end of these ranges to another, is raving about the intensity of the reds. Like the colour. O’Leary reckons it reminds him of Elvis. “Everything’s got this dark sheen,” he said.

“Wash my mouth out, Whitey, but even the Merlot’s almost jet black.”

Cabernet is a slightly different business this year: the bunches are generally light, with small berries and lots of stalk. Even in the cooler spots, it’s been ripening early. That variety’s heartland, Coonawarra, was shot with frost on November 3 and 4. Much of it never recovered. Those fortunate enough to have overhead irrigation, like Petaluma’s Evans Block, survived, however. “We had to bunch-thin in the end,” Andrew Hardy chuckled.

We could all tell right from the start that 2018 Shiraz was ON. Colour, flavour, intensity, balance … it set up really well early and the good bits I’ve seen from around the Ranges have gorgeous perfumes. Like this fruit from over my front fence has thick, but softening skins, beautiful pulp, incredible swoony flavours, and pips as ripe and beautifully tannic and brittle as old walnuts. 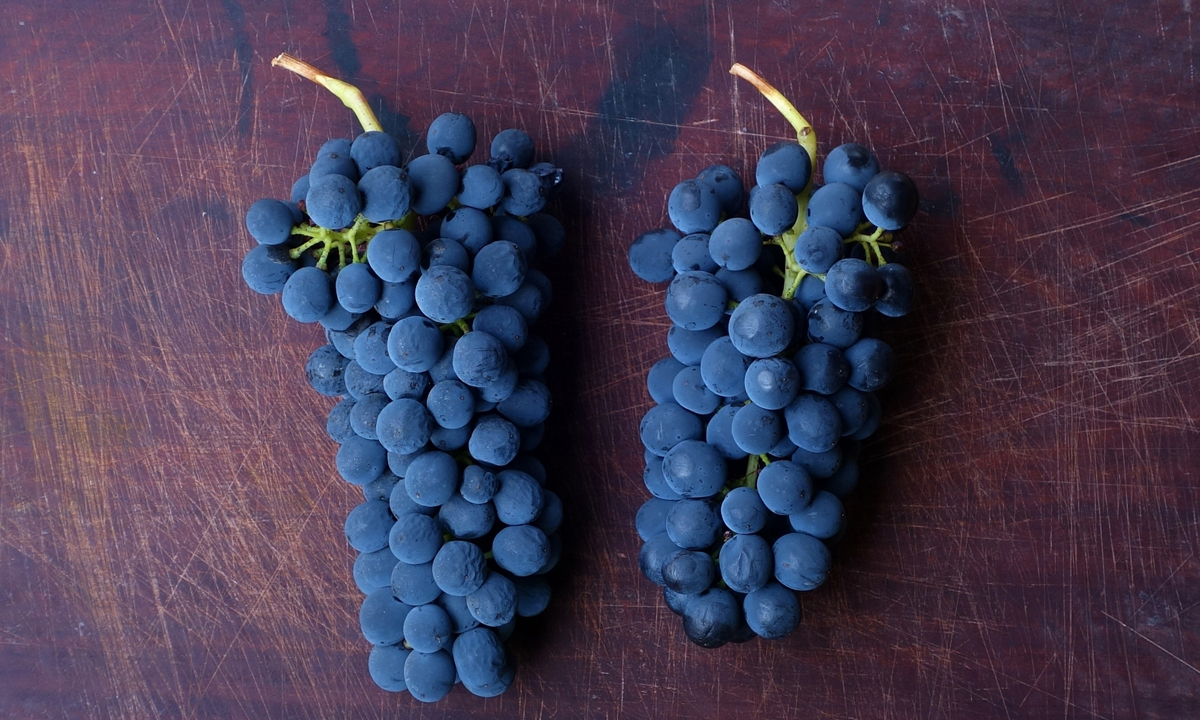 2018 Shiraz: the left hand bunch is from the more exposed western side of the canopy, so is a little riper than the bunch from the other side of the same vine. Photo: Philip White

I regularly quote Penfolds’ chief winemaker Peter Gago’s claim that for 20 vintages in a row he’s had to recalibrate his definition of the term “extreme”.

I’d add one homily: as that climate chaos intensifies, the quality gap between the fruit of mindless mechanical chemo-industrial and hands-on intensive gardening grows ever wider.

When things get weird, you don’t get nearly so much luck. The camo bleaches and blows away. You need more than global warming or a smartarse label made up by somebody with a haircut.

If the quality of what’s crossed my desk since Christmas is any indicator, that quality gap’s becoming a bloody scary bottomless chasm as the shelves take on a more chaotic and confusing display than ever.

So the misnamed Liberal gubmnts of this nation and now this state of South Australia hand out $50 million of our hard-earned to ethanol producers regardless, it seems, of the quality or profitability of their produce.

Thanks Barnaby Joyce and his former shotgun rider, Riverland Senator Anne Ruston, for helping shake the dosh out.

That’ll be seasoned by one honey of a Royal Commission inquiring into the mismanagement of, and outright theft of Murray-Darling water on their shift.

Water is a significant gastronomic item.

Thanks St Jay Weatherill for that benediction. Watch very closely.