It was a damn fine thing to go for a bit of a drive last week, after a long stretch of a poverty of health had precluded it. Not that I drive on the public road. Incapable of framing my will to the law, I sensibly removed my licence from myself 30 years ago.  Instead, this time Stephen Forbes took me on a 24-hour conversation about the Murray River, mainly.

Very handy, having a botanist of his stature at the wheel when you’re out looking at nature and food you can grow. I owe you, cobber.

Perhaps on my account more than his, it was more about the Murray River and drinks.

Through my teens in the dusty edge-of-the Mallee rainshadow country at Kanmantoo, we’d go swimming in the river at Murray Bridge after the hellish heatwave bus ride home from school at Mount Barker. C’mon youse: Mum, six kids, in the car, 17 miles, straight in the River. We’d slop around in there for hours, swimming over to the other bank and upstream around the bridge pylons.

You could catch the odd Murray cod and freshwater cray and even see underwater until the cheese factory pumped so much junk into the river you could only catch redfin on cheddar.

No one ever swallowed. I never saw that lazy River as a source of drink until somebody put the first Tetra-Pak orange juice on my school menu in the Hills and suddenly we were all on the bus for a social studies and geography excursion to study the new citrus industry booming away up there across the desert in the irrigated Riverland. Clever marketing, those people. Somebody musta got to the teachers.

Since then I grew up so far I grew down and discovered the wines of the River, starting with Stones Green Ginger Wine made under licence for the London owners by Angoves. Perfect pop for the macho hillbilly not yet ready for raw spurruts. Next step up the gastronomic ladder was sweet sherry rotgut, then dry, then oloroso and I was ready for the red, although by then the River had lost me to premiums like McLaren Vale’s Seaview and the Barossa’s Kaiser Stuhl.

So after a long absence from our biggest valley, there we traversed the vignobles en route to it … McLaren Vale, the Adelaide Plains, Greenock and the Barossa Nord, then Riverland after the long slide outa Truro and down Accommodation Hill – very slippery during vintage, mind you – across the saltbush flats where librarian Valmai Hankel still farms horses when she’s not bustin’ her bones. Call in for an arid hamburger on a stick at the Blanchetown (no relation) roadhouse where Winestate publisher Peter Simic started out and thence we fell seriously into vine country at Waikerie.

The tankfarms close to the roadways are much cleaner and more food grade than the Heath Robinson trainwrecks of my youth. In fact, the roadside refineries of the River often seem much more polished and tidy than the big ones I see tipped today around McLaren Vale. Most of the Riverland vineyards look happy and lush and very ready to be picked if they’ve not already had the pleasure.

Given the current pious sanctimony South Australia shows the Murray-Darling Basin Authority as Premier Jay Weatherill launches his Royal Commission into water use, abuse, waste and sheer broadacre theft, I was surprised to see farmers there using overhead irrigation to grow baling hay.

Can’t blame them, I suppose. If the freshest figures supplied by the appropriate body, the Winemakers’ Federation of Australia (WFA), are much to go by, you’d have to be pretty smart and scarce to make money selling grapes.

According to the WFA , if we start at the wine region closest to the Murray Mouth, Langhorne Creek, about 70 per cent of its winegrapes were grown and sold at a loss in the vintages 2012-2015. Head upstream. The Riverland hangs between 84 and 94 per cent grown at a loss. Next you hit the Murray-Darling/Swan Hill area, with 78 to 89 per cent losers. Riverina, home of the hallowed Yellowtail and the Hon Michael McCormack rookie who’s just taken disgraced Deputy Prime Minister Barnaby Joyce’s job … Riverina’s pretty much straight 98 per cent grown at a loss.

One would hope that current Premier Weatherill’s Royal Commission inquiring into the boofheadedness of the Murray-Darling Basin Authority and the huge accounts of criminal theft of water on its shift would ask some questions about whether this precious scarcity is best spent growing ridiculously cheap ethanol to start with. Food could be good as an alternative, if only they’d learn about better, more concentrated flavour than they expect us to look for in their ethanol.

Or citrus products, for that matter. That OJ we trooped across the desert to adore as kids seems to have withered. The orchards have diminished. The Big Orange is locked and rusting and waiting for UFOs. Maybe these Riverlanders should learn to turn the tap off before the flavour’s all washed away. 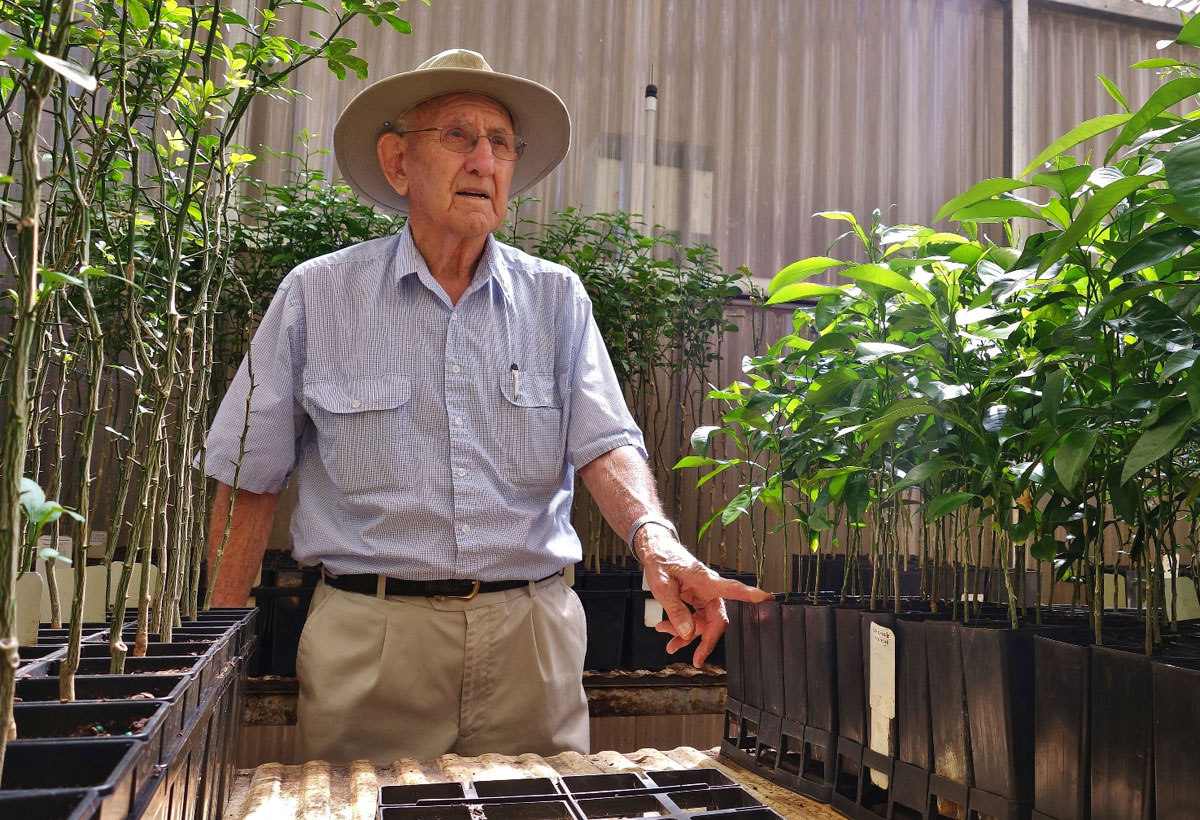 The citrus secrets were under their noses all along. There at the end of the road we hit orange heaven in a working nursery laboratory. Like one of the best in the world. The whole exercise was to visit the 88-year-old Riverland citrus researchers/writers and propagators, Ian Tolley OAM and his wife and colleague Noelle, AM.

The flavours that flicked from Ian’s slender blade covered rare citrus types from Gondwanaland to Japonica to Seville. I had no idea. In the nurseries they came from hundreds of potted, grafted specimens; in the kitchen from bowls of soaking diced dainties in the fridge. It was mind-blowing. Without even wasting most of them for a taste, for these are precious research items, I smelled a wider range of aromas there in the Tolley citrus than you’d find in the local wine industry. 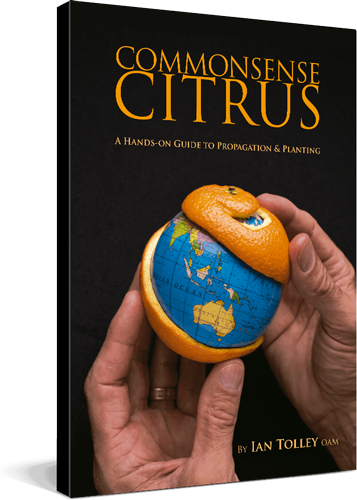 Why didn’t the rest of them take closer notice? Like all those citrus growers now wondering whether to plant some Barbera grapes or something else from the Barbary Coast? Maybe because, until very recently, Ian and Noelle had been far too busy on scientific R&D to write their incredible book, Commonsense Citrus – A Handy Guide to Propagation and Planting.

You like lemon or lime in your gin? juice in your vodka? You have to know this book. Think you know anything about marmalade? Want to keep a favourite ancient lemon strain alive? You know now.

All the time we were there in the vast sweeps of ox-bows, billabongs, meanders and full-bore bloody swamps we sweepingly, glibly call the Riverland, I wondered how many names the original owners of this country used for its myriad nooks and crannies. You never see these places, feel their difference from fast cars or boats you didn’t make yourself from the side of a tree.

You can’t really learn their feel through a pair of boots. The phone don’t tell you. Maybe we’d do better if we took off our boots and our poison spray hoods, got down and looked a lot more closely at this ground and honoured it more. Got closer to a River you can drink.

Two days later, sunset: away back at the Murray estuary and the lakes and Coorong at its mouth, all this became even more raw and obvious as I watched the ashes of my friend Ian Chance drift ever so slowly toward the Great Southern Ocean from his home landing at Clayton Bay. He’d been really crook.

A mellow bottle of Langhorne Creek Cabernet at sunset put all that in a holding pattern for awhile. That’s enough River research for one week.