Picking is well underway in Australia’s warmer spots. 2018 is on.

As annual weather patterns change repeatedly and convincingly enough to become climate, the quality crop is more and more likely, or certain to be, the result of particularly clever, sensitive viticulture.

The years of vintage flukes faded with the good old days.

As the weather scientist tends now to be a constantly astonished observer, the gardener has become the hardcore frontline warrior. One of the more likely to be able to effect some survival.

As wine science has become fat and lazy and oversupplied enough to afford itself a retro phase, removing some of the product’s reliability in pursuit of character and flavour under the “natural” flag, Bacchus knows there’s room for some real sassy, bright viticulture revolution out there right now. Seriously.

Flavour should come from the ground and the sky, not from a denial of wine science. And with the popularity of wild yeast replacing the cultured stuff, maybe it’s time now for viticulturers to start learning about the yeast they grow in their vineyards …

Take a drive around McLaren Vale, Barossa or Clare right now and check those drooping yellow leaves. They’re exhausted. Fried. You need healthy leaf to ripen berries. Whatever do these people think they’re doing? There comes a time to climb down out of that air-conditioned stereo tractor capsule, turn off the spray, and inhale some reality. Taste some vegetation. Taste your dirt.

At veraison – the colouring of the grape skins – here near Kangarilla, we had one of those heatwaves that have marked this summer: a day or three of blistering heat, with the wind coming south off the desert, mercifully followed each time this year by gusty cool with some rain in it. But before it chilled, that heat seemed to set the colouring skins at quite ripe, leaving adjacent berries just as big, thick-skinned and healthy, but green as an apple.

There are still a few green berries, but nearly everything’s coloured up nicely.

Further south along the Willunga Fault the fruit was more advanced earlier, with an even set of colour. Most of this stuff, especially in the broadacre vineyards, is well into harvest now, ripe, rich and still maybe a bit splooshy to accurately judge, but largely free of moulds and sniffles. Guardedly, good. Ish.

I hear a few winemakers whingeing about the high incidence of raisined fruit.

Depends on the viticulture. Shiraz looks best so far, but we’re not yet into the best Grenache blocks in the Vales’ northern uplands, so who knows?

Way up at the north end of these Mount Lofty Ranges, at Clare, they’re gurgling about the quality of their Shiraz, but suggesting the better viticulture is surely rewarding the 2018 Riesling crop, with those heatwaves frying berries grown in exposed aspects. There come the kero characters some buffs – particularly the English – seem to adore in maturing Rieslings.

Vineyards with better aspects and smarter row orientation look like growing the sorts of austere steely-clean Rizzas that I prefer.

Some of those heatwaves were quite confronting. Like that day the famous bicyclists raced up Old Willy Hill. It was blistering. Man I was here cowering, blinds drawn, listening hard through the coolest jazz in the house for the worried buzz of water bombers. That’s no way to start a vintage. Ask our friends in California. Their bombers were for real.

It’s interesting that all last night, the harvesters were droning away picking the big industrial/conventional vineyard owned by neighbours on the clay flat opposite me, while on the ironstone slope between us – different owner – the biodynamic Shiraz sits stubbornly at 10.5 degrees Baumé, holding good firm acid with thick, healthy foliage. And I mean individually thick, textured leaves of good colour, and not too many of them. The leaf-pluckers have been through here twice this year.

So the high-foliage, high-spray-input red gets picked at what to me tasted like about 15 Baumé – or roughly 15 per cent alcohol – while the hand-tended, leaf-plucked, low-input vineyard under the net between us acts like it’s growing in a much cooler place. It’s about four alcohols behind, but with more promising and complex flavour.

The birds are fascinating. There are lots of fruit-eaters this year. We need raptors. Those other birds that eat grapes have free-range feasting on the flat.

One afternoon I watched a wee kestrel politely hovering there for grasshoppers and mice while a restive Brown falcon hunted and worried the swarms of grape-eaters out on the fen. Then there came a mighty gust of squawking and panic followed by a shocked vacuum of silence that meant the local peregrine had just blitzed through at about 150kph.

After that happens, it takes about 10 minutes for birds to begin to re-emerge before things return to normal picnicking and socialising.

I’ve not seen so much of the wedgies this season: the year’s been rich and sweet enough to keep them full of joeys, back up on the ridges. 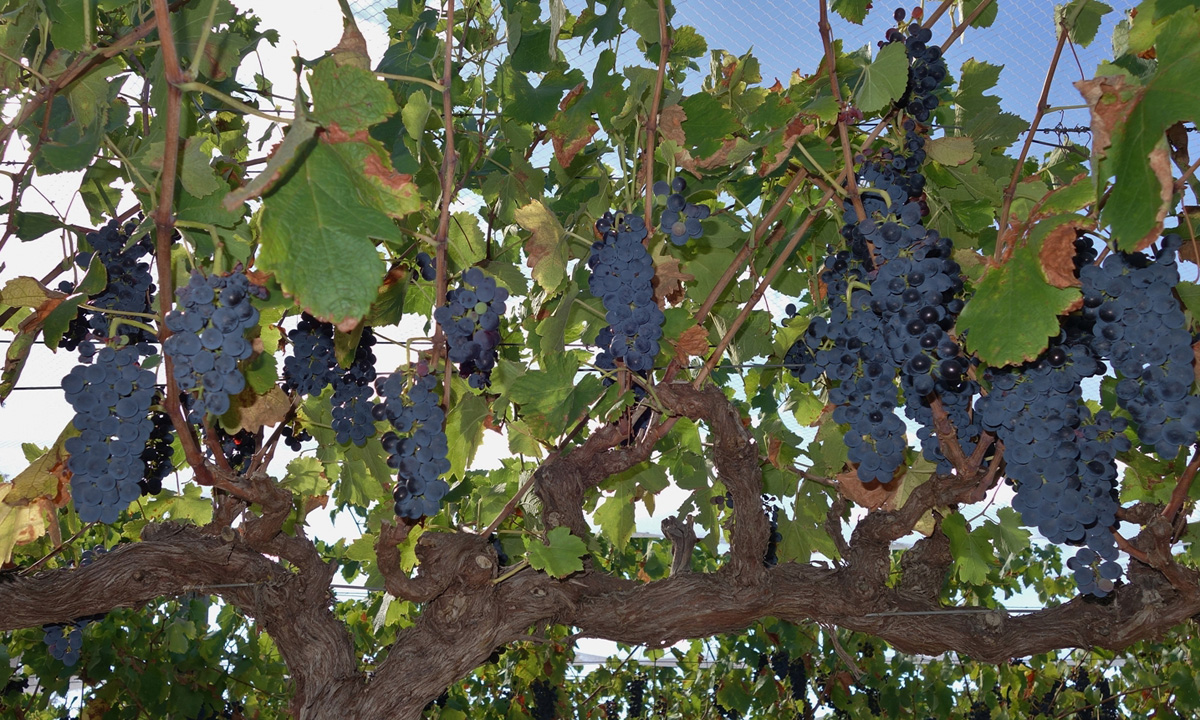 While these Ironheart grapes on the slope at my fence are not yet ripe, the gardeners put up the netting a fortnight earlier than last year, which was a very smart move, given the fact that all those greedy little feathered dinosaurs from the flat now, suddenly, have no grapes to eat.

And neither do the hordes of rodents. This is the time of year when all I need to do to attract furry company is leave the doors open. Once the grapes are gone, in they march, looking for the sort of gastronomic tour the vineyards cannot really offer.

The raptors will chase them inside.

As for other wildlife? Booming. While I cowered over my tripod in the dark, hoping the bloody blue supermoon would poke through the clouds, a bull koala in the gum above let go a mighty roar that stopped my heart. Jeez that’s a bellow! And the local buck roo is hyper-panicky. His roars are more grunty. I watched him from my bed the other morning, all two metres tall on point, sauntering along my front fence in the dawn. When he hit the old chook pen in the corner, he leapt easily through the hole left in the fence when somebody stole the chookhouse before I came here.

Leaving me wondering about what to wear when assisting a giant buck roo to remember the hole he came in through in order to make a gentlemanly escape.

I went back to bed. It took him five minutes. He worked it out.

Good luck with the rest of it!