The vines include large portions of very good Shiraz and Cabernet, along with a smörgasbord of popular new types, which have been tended by master viniculturer David Gartelmann.

In the prized limestone, red loams and ferruginous sand country halfway between McLaren Vale township and Maslin Beach, the three blocks had been owned by a local investment consortium of senior wine identities who felt it was time to claim some super and get those feet up.

With names like those, the vineyard’s in the sort of thoroughbred track-ready condition you’d expect, and it has an ample recycled water allocation. 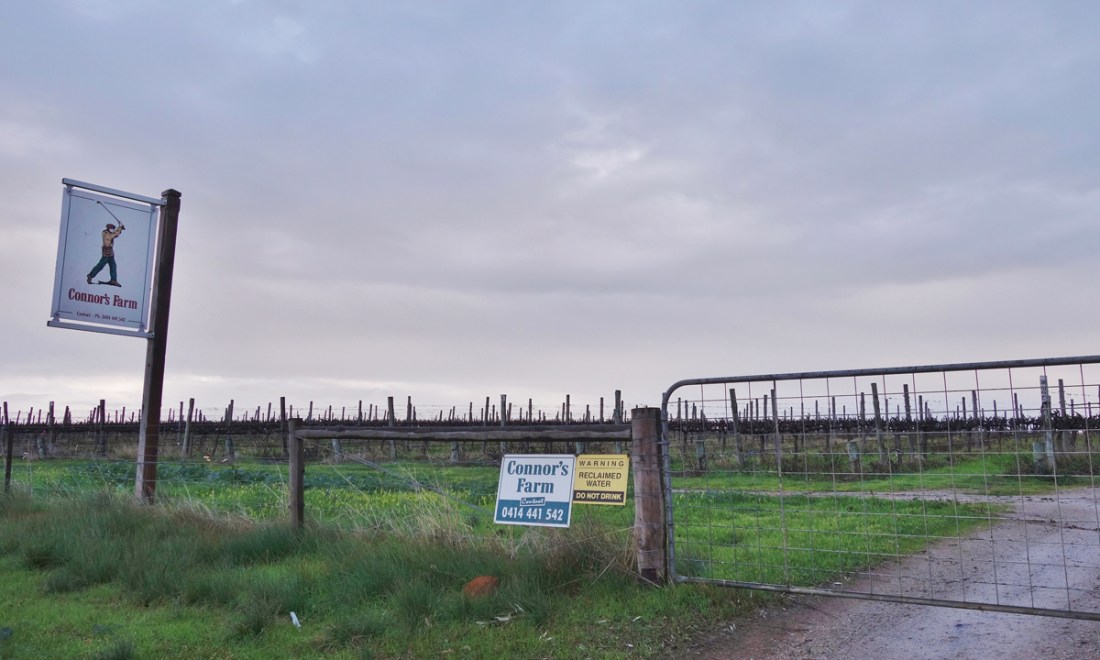 “We’re noticing a growing demand for vineyards with a track record for high-quality production,” said Russell Iles, who brokered the deal for Knight Frank’s Agri Business.

“At $10 million, it’s an excellent result. It’s a significant win for McLaren Vale and really sets the bar for future transactions.”

He said vineyards of such quality were attracting intense interest from local investors, but increasingly from foreign purchasers.

Little secret is made of Treasury’s keen interest in the best McLaren Vale sites.

From Grange down, Vales fruit has long found its way into the top bottles of Penfolds. Anything that doesn’t make that cut happily finds its way into Wolf Blass or other Treasury brands further down their vast product pyramid, where prices tumble and volumes multiply.

Peter Gago and other Treasury winemakers have a particular interest in the limestone and calcrete geologies from Oliver’s Taranga south to the Communications Road area near Maslin Beach. They have also moved onto the Kurrajong Formation with a new vineyard on the piedmont at Willunga.

I caught Peter coming off an international flight when I called – he had yet to be fully briefed on the final purchase.

“Allocations of Bin 389 in particular are severely under-delivered in every global market,” he said. “Not to mention other Bins, and higher! Which is a nice problem to have, but …

When Max Schubert was designing Grange on his way home from having his mind blown by France’s top winemakers in Bordeaux in 1950, he wanted Shiraz from Morphett Vale to be a critical part of his blend. Those vines were in pre-Cambrian water-retentive mudstones and siltstones.

That sure worked. But those vineyards are long gone. Most of these priceless geologies have been eaten forever by suburbia: the last bit to go in McLaren Vale proper is right now disappearing beneath the dormitory horror of Seaford Heights.

But in Penfolds country on the plains of the north Barossa the same 650-plus-million-years-old sedimentary siltstones survive without houses. North of Greenock, west of Kalimna, there’s been a great frisson over some vineyards sold in this same Tapley’s Hill Formation and the similar Yudnamutana sub-group.

It started this time last winter when arts entrepreneur John Russell sold his 40ha Russell Farm and vineyard there to the Argentinian billionaire Alejandro Bulgheroni for $1.95 million. Seemed a lot then, but it’s piffling now. The farm includes a two-storey house and 12 hectares of 100-plus-years-old Shiraz, Grenache, Mataro and Semillon that was originally planted by the Kalleske family.

Right across the road from this lies a fabulous vineyard established by David Murdoch, who had been chief viticulturer for Treasury back when it was Southcorp. He was far too enlightened for some new owner or other who summarily tipped him out, so he found work locating, procuring and planting this ground for an investment company. Its fruit has become a stalwart component of Grange, as well as other top-flight Treasury offerings.

Bulgheroni employed McLaren Vale viticulture wizard David Paxton to rejuvenate his new oldies and plant another 18 hectares. Packo couldn’t believe his luck when the dam-building bulldozer scraped through the topsoil and a layer of limestone to find that precious siltstone beneath.

One gets the feeling they didn’t choose their purchase by looking at your actual geology map, but more according to the perfect scores the powerful American critic, Robert Parker, had been giving Greenock area wines for the decade before his retirement. Now they know their rocks are not only the likely reason for those 100 pointers, but the rocks will be around quite a lot longer than Parker.

Just recently Bulgheroni sensibly decided to extend his holding and bid at a Homburg Real Estate auction for 16 hectares of old vines right next door. About 75 per cent of this was Shiraz, already contracted for sale to Treasury for less than $3000 per tonne. Other than that, it all seemed fairly simple. But a Chinese consortium rolled up and suddenly the bidding was stiffer than anybody’s seen in these parts: the local aspirants withdrew long before the Chinese pushed the Argentinian to pay $149,000 per hectare. And this for a vineyard whose fruit he’s obliged to sell to Treasury, for a measly price, for five more years.

As with all auctions, the neighbours were there for a stickybeak, including a representative of the de Vito family who owned more remnant Kalleske family plantings on the other boundary. Once the disappointment of the Chinese was evident, a quiet chat took place, during which they privately snapped up that vineyard at an undisclosed price: a consolation prize for China and a bonanza for the vendor.

Which all goes to show that the real estate folks are beginning to understand the importance of geology. The smart investor is certainly beginning to get its whiff, and spend money accordingly. 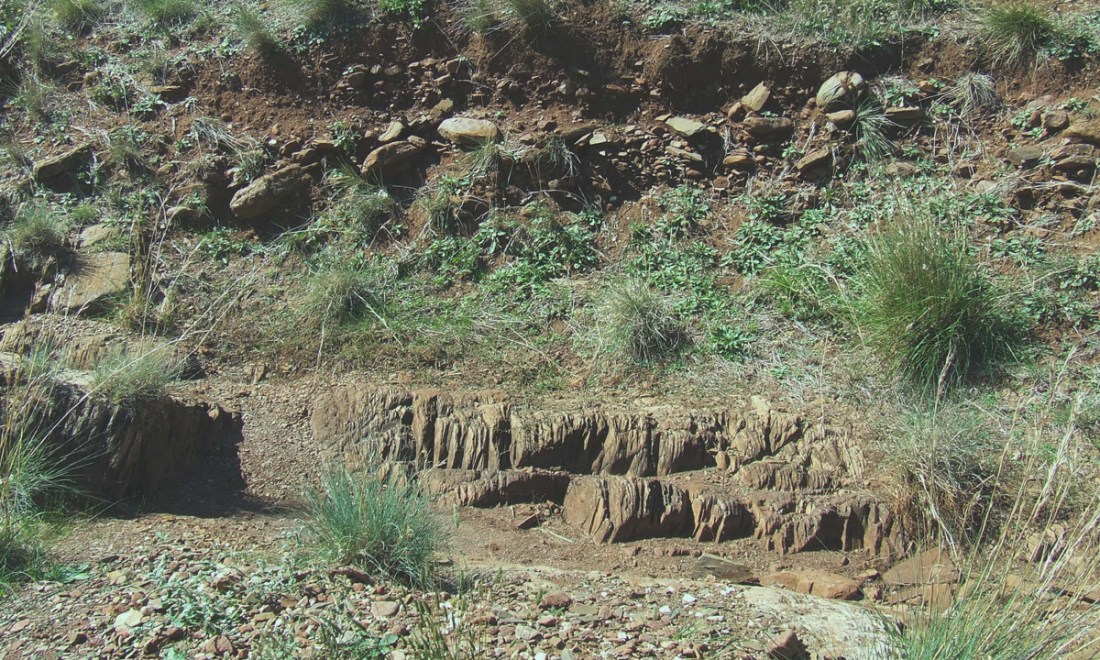 Those vertical slices of siltstone on the creek are typical of the good grape-growing rocks at Morphett Vale and Greenock. No vine roots will find these ones, however: this exposure near Spalding has half a mountain of younger stuff on top rocks. Photo: Philip White

The lure of these hard old grounds in the Barossa’s western ridges and the Nain Hills at Greenock is due not only to the sublime flavours those ancient rocks offer, but also to the manner in which the vines grow more modestly. Lower yields, managed and deliberate, concentrate the characters the rocks and location provide, putting an extra zero on the price of each bottle if you do it right.

As in McLaren Vale, the rich clays and sandy loams of the flat floor of the Barossa proper drive vigour which is more aggressive and harder to control. These are largely creek alluviums and sediments from the last 10,000 years or so.

Barossa also has its equivalent of McLaren Vale’s famous ferruginous Maslin Sands. Washed by great effluvia from the same mountain range at the same time – roughly 50 million years back – the Barossa’s Rowland Flat Sands are the same as their McLaren Vale brethren. And the same stuff as the big sand quarries at Highbury, Golden Grove, Gawler and Rowland Flat.

You can’t build cities or roads without sand.

Before Don Dunstan convinced David Wynn to sell him the Wynnvale Golden Grove and Modbury vineyards for housing, they grew astonishing wine grapes, too. Same sands.

In that north stretch of the Barossa, exposed at the surface, the sands have even formed ironstone, just as they have in the gullies of Blewett Springs in McLaren Vale.  You can see this at Stonewell, Langmeil, and on Radford Road, between Marananga and the Greenock Creek ford. There, in the cutting at the top of the hill at the north end of the Seppelt Mausoleum block, these fabulous grape-growing formations are exposed.

What has amused, bemused and irritated me, is the fact that somebody’s deliberately covering that priceless viticulture ground across the fence with thousands of tonnes of building rubble they’re bringing from somewhere else.

Maybe they’re trying to make the Mausoleum hill taller. At least in McLaren Vale they’d spread villa rash all over it until the new protection laws came in. These legislations put a hold on mindless housing in the Barossa, too, but they don’t restrict people burying rare geology that can grow wine grapes of international distinction at a dazzling profit.

If whoever’s responsible eventually gets vines to grow in that rubble they can lay claim to “unique geology” on their back label. They’ll be one of the very few who actually have anything unique. That’ll be geology of this new Anthropocene Epoch, made by them.