While the need for such a facility has been discussed by Barossa winemakers for several years, the $4.5 million project has taken significant steps forward in recent weeks and could open as soon as March 2018.

It is being driven by the Barons of Barossa, a group of influential wine industry personalities from the region, and has recently secured a major tenant and council building approval to develop the 2.8ha site between Tanunda and Angaston.

The Barons bought the land last year and will contribute $1 million to the project. A fundraising campaign to raise the remaining $3.5 million will be launched next month.

Barossa Cellar Committee chairman and Barossa Baron James Wark said the lease agreement signed last month with the Barossa Grape and Wine Association (BGWA) would bring the building to life and ensure the wine in the cellar was used to maximum effect. As part of the deal, the BGWA will be given an annual promotional allocation of wine from the cellar.

Wark said having the collection all in one place for the first time – rather than in various cellars around the region – would allow for consistent cellaring in “pristine” conditions and improved cataloguing and access to the wine.

“We decided that while we wanted this wine cellar, we also wanted it to be a living place and not just something that was a dormant cellar,” he said.

“What I think we’re going to be able to do is to really promote the Barossa in a fantastic new way through this whole association with the BGWA in there and giving them access to these fantastic wines, which can be used responsibly to promote the whole region.

“They also have a number of guests come to the Barossa Valley, such as wine writers, wine buyers and people wanting to undertake master-classes for educational purposes, and they have previously been limited in what they can do at their small office in Tanunda.”

The Barons of Barossa formed in 1975 and built its collection from annual wine donations from local companies to store and use their best wines at functions for people who can benefit the region. 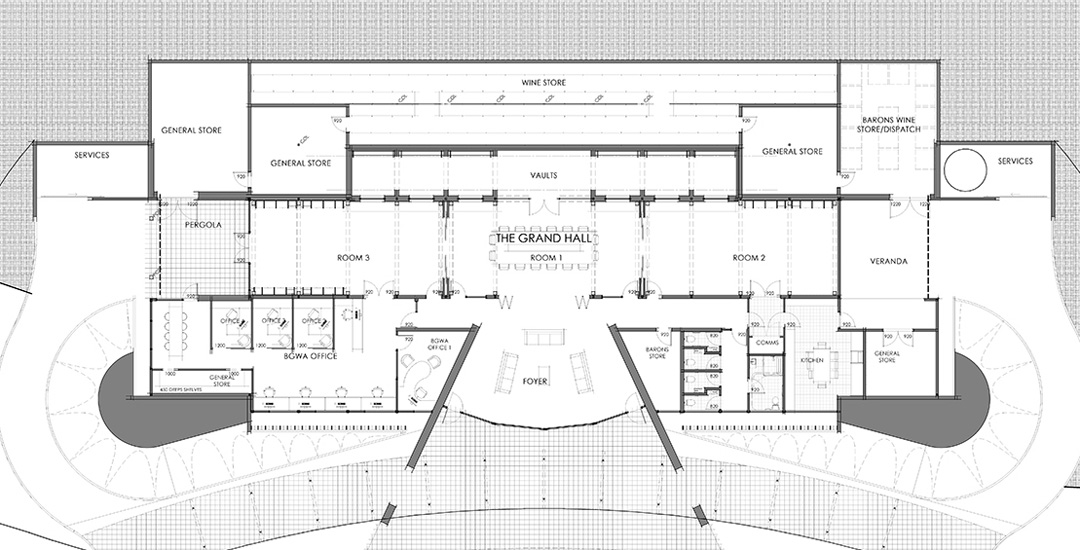 The block of land earmarked for the Barossa Cellar slopes down to the west. The building will be built into the side of the hill with the cellar section effectively underground, while the offices and “Grand Hall” are positioned towards the front of the building.

“It’s going to be very environmentally constructed and it’s going to have some stunning views looking out to the west across the Barossa Valley and across the vineyards,” Wark said.

“It’s not going to just be a stone building with no personality; it’s going to be done with a great deal of sympathy to where it sits and with taste.”

The fundraising campaign will launch in April and will involve a number of levels of support, starting at $500 for the naming rights to a stone used in the building’s entrance or $1000 to buy one of the 1800 vines in the surrounding vineyard in perpetuity.

Higher-level contributions will be part of a “key” system where donors will be invited to attend functions such as the inaugural opening of the Barossa Cellar and exclusive VIP holiday packages to the region, as well as red-carpet tastings and visitor experiences at various local wineries. These packages will start at $10,000 for a “Barossa Key” through to $250,000 for the ultimate “Diamond Key” for eight people.

The cellar will be built by Barossa Valley-based construction and engineering company Ahrens Group.

Managing director Stefan Ahrens, who is also a Baron of Barossa and on the Barossa Cellar Committee, has agreed to carry out the build at cost price.

“We’ve got council approval, we’ve got a tenant and now we’re going to the next step of getting the funding organised,” he said.

Wark said the Barons of Barossa would have a small presence in the building with an office and small meeting room.

“It’s not a flag-waving exercise for the Barons. It’s something we think will be a great benefit to the whole Barossa grapegrowing, winemaking and broader community,” he said.