The vineyard cyber monitoring system known as Project Boundary Rider has been designed by Canadian company Be Seen Be Safe to keep SA’s $1.78 billion wine industry free of devastating pests and diseases such as phylloxera and Pearce’s disease.

Vinehealth Australia, based in Adelaide, is overseeing the project and has begun a six-month trial at 30 vineyards in the Barossa Valley and McLaren Vale.

It will include the busy vintage period, from February to April, when vineyards and wineries are susceptible to pests and disease partly due to high traffic volumes in and out of properties.

The Boundary Rider app places a virtual fence around vineyards, tracking the movements of people across boundaries via GPS on a smartphone.

Movements are recorded in real-time, with vignerons benefiting from an up-to-date electronic visitor record of anyone with a smartphone who has moved across their geofences.

In the event of a pest or disease outbreak, the technology provides instant data to enable a rapid response to contain the spread and minimise loss.

Vinehealth Australia technical manager Suzanne McLoughlin said while it was still early days for the project, initial feedback from users had been positive.

“Having it run over vintage and in the lead-up is good because it is one of the times of the year when vineyards are experiencing high numbers of visitors and contractors coming onto properties,” she said.

“The program also helps us to raise awareness of biosecurity in general for a wide range of people, from fruit pickers to wine tasters.”

According to the Orgainsation of Vine and Wine, South Australia produced 51 per cent of the Australia’s crush in 2016 and about 75 per cent of Australia’s premium wine from some of the oldest vines in the world.

Vinehealth Australia is also working on a second app to help growers identify and treat pests, comply with local and state regulations, and act as a “one stop shop” for viticulture biosecurity.

McLoughlin, pictured below with Vinehealth Australia CEO Inca Pearce, said while there was no way the Boundary Rider app could prevent all pests, weeds and diseases entering a block, it was a good start. 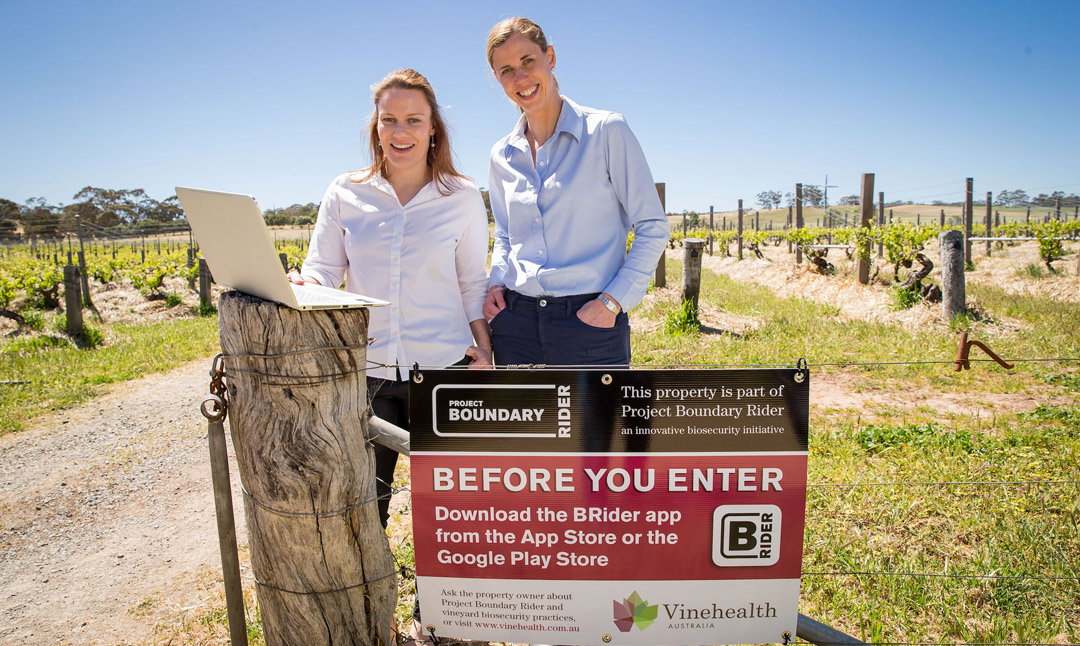 She said the app also helped raise awareness and prepare vignerons for exotic pests not currently present in Australia, such as Pearce’s disease, in case of an outbreak.

“We’re hoping by the end of the trial we can assess the merits of the technology and potentially roll it out more broadly if it ticks the boxes,” McLoughlin said.

“We can also use the technology for a broader-scale view so we can simulate the outbreak of a pest, weed or disease and use the logs to see where that pest could have spread based on the movement of people onto different properties.”

Growers receive an immediate notification when someone has entered a vineyard, while visitors with the Boundary Rider app are greeted on their smartphone with a welcome or instructional message.

Information from app users is uploaded to create an electronic logbook accessible to the owner of the vineyard.

The free app, which can be downloaded from the App Store or Google Play Store, can also be used to isolate smaller sub-sections within a block to ensure small outbreaks of weeds or pests can be confined.

“We’ve even had groups asking if the technology could be used to market wineries or events within regions when people cross into a new area, so users are not just seeing its potential from a biosecurity perspective,” McLoughlin said.

“Even though that’s how it started, we want people to think big about where this sort of technology could take them from a regional, state or even national level.”

“We view this groundbreaking project with much anticipation and excitement because the health of our vines is paramount and we are always looking for new and improved ways of ensuring their longevity,” said Henschke Cellars viticulturist Prue Henschke.

Gemtree Wines viticulturist Melissa Brown is also happy to be part of the initiative.

“Being certified organic and biodynamic, as well as owning a number of different vineyards, means having an effective monitoring system is a really important tool for managing security and protecting our precious resource,” she said.

Although they have never reached South Australia, Pearce’s disease and phylloxera have ravaged vines in several major wine-producing nations, causing entire vineyards to be removed.

“It will protect vineyards from pest and disease threats and provide critical intelligence about the movement of people coming in and out of properties,” he said.

“Wine is one of South Australia’s key export industries and we grow about 50 per cent of Australia’s grapes. It’s vital we do everything we can to protect the industry’s future and South Australia’s reputation as the producer of premium food and wine from our clean environment.

“Historically, we have an enviable reputation globally for the strength of our biosecurity systems and Project Boundary Rider will take it to another level.”