Almost 15 years ago to the day, I was halfway down a row of about 400 masked bottles of Shiraz when something happened.

Happened. Not much other than boredom and paranoia happens in those nether regions halfway along such a row: the taster begins to doubt their own organoleptic skill because everything seems the same. It’s the loneliness of the long distance runner. The Nullarbor Plain of Shiraz. No coverage.

Right at that moment when the paranoia and imposter syndrome had their teeth in my bum I hit a glass of something unbelievable: vibrant electric wine with a sinister gunmetal glint. I had the stewards check that it was Australian. Not because I really thought it might be French: I’d never had a red south of Lyon that jumped and teased like this shiny sassy bastard.

And I couldn’t recall smelling a Shiraz like that from Australia.

I mean it did remind me faintly of barrels Gerard Jaboulet had recommended I sniff in the chais at Tain l’Hermitage, but it wasn’t really like those. It was more Martian. It reeked of ozone and glimmered like violet neon all the way through the blood and the lucky moist lungs to one’s perfect, delighted exhalation.

There were yellow and orange sparks in my miasma. Lightning. With Rahsaan Roland Kirk playing three saxophones at once, plus a nose flute and a police whistle.

Ping! You’d think all the glasses would shatter.

I had the crew renumber the bottle and put it back in the line-up a lot further along and I reckon I could smell its vivacity coming again from 10 glasses away. I still didn’t know what it was, but it was already making a total ass of the notion of blind tasting. There it sat, daring me. Kootchi-koo. We repeated that exercise twice. Damn thing won not only that vast Shiraz class in my 2001 Top 100, but ended up with the highest points by far out of the thousands of entries in that whole damn exercise.

It turned out to be Castagna Genesis Beechworth Syrah 1999. I’d never heard of Castagna. It was a fairly quick getting-to-know-you. Tasting Castagna has since been cemented in as one of the very few totally revered rituals I anticipate each year.

I last drank that 1999 exquisity at the winery in 2013, when it had me dribble “Not like any other Australian … creamy, opulent, luxurious, harmonised essence of Shiraz, almost leaden in its incredible authority and weight.  The fruit simply melts into a pot of red gold.”

So there. You got blue and red and molten, firearms, the most in-your-face outa face brass section ever to emerge from one mouth (and a nose), you got cream and sparks and teeth in your arse and lightning and gold and blood and two weird gasses and straightout goddam sass.

It doesn’t smell so blue. Not violet, anyway: maybe deeper. The dark edge of it, where the ships fall off. And that pirate bit of it is the first thing requiring addressing: like once you’re aboard you gotta look ’em in the eye.

It has that deep mahogany and dried kelp sea captain’s cabin reek: more cognac than Royal Navy rum; more Flinders in Baudin’s cabin than Baudin visiting the bay-rummed Englishman. Or maybe he dug out his powdered wig especially for it. I can smell that, too, but I reckon it’s the Frenchman’s.

Then the currants begin to ooze through the starch and dressed leather, and that prickle of cordite from the powder-keen cannon lads seething below decks seems to go quiet when somebody opens the oven with the panforte and dumplings with the blueberries, blackberries and blackcurrants – even some juniper – and it all comes wafting up from the galley.

You’re much closer to land than you thought. You can smell Australia in the summer coming over the ocean. And you’ve gotta get there because it turns out your hull’s full of fresh fruit.

I like the way this vineyard has spent 15 vintages morphing from extra-terrestrial, like that UFO 1999, through a maritime approach then back to shore after this new vintage takes a night emptying its sails of gust, nudges its rubbing strakes against the bar and starts unloading fruit on the wharf where the fresh flowers, herbs and spices are stacked up to the galvo.

“I reckon I picked an average of one bunch per vine.” 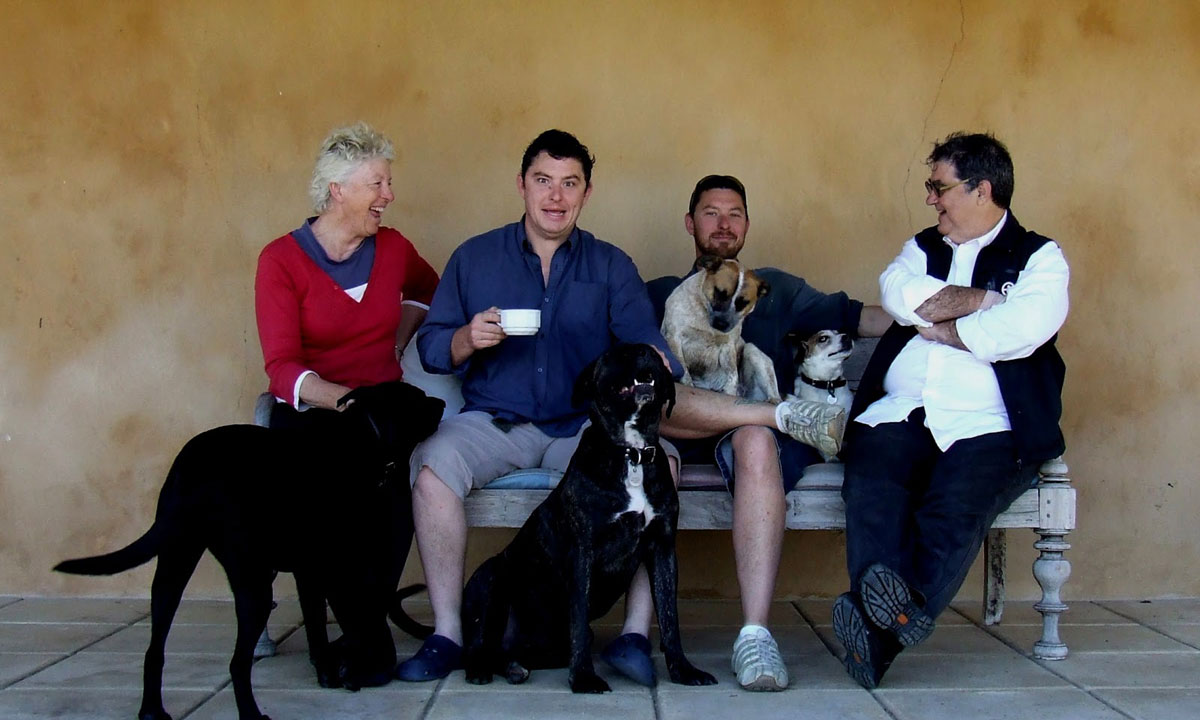 Since then, those vines have threaded their roots through the volcanic loam with its granitic gravels with all that potassium and reflective crystals of quartz and micah … I reckon some of those black flakes are tourmaline: black cufflinks for French cuffs … and found their way through the clays to that massive slab granite that forms those Victorian Alps. Granite. Crystallised magma from the gooey deep of the planet.

So it seems fitting to this vagrant mind that after that UFO start, we’ve landed and now pump out fewer sparks. Now it’s all the smells of labour and horse tackle and human endeavour decorating that juvenile perfumed fruit and the smug earth below. The garden.

Carolann Castagna, by the way, grows a bonnie herb garden just off her wide verandah, and collects the seeds from a wide array of aromatic plants. These she spreads through the vineyard, to add fragrant complexity to the sward. I shall never forget once alighting from the car there after a long drive. The full moon was humping up out of the blue eucalypt ranges to the east and the whole magic atmosphere was redolent with the smell of that ripening pasture and its myriad facets and wafts.

And the maritime stuff? The square-riggers? That’s what happens when you know too much. A fortnight back, before these Castagnas arrived, I was with another brilliant winemaker, McLaren Vale’s Stephen Pannell. As we drove around his vineyards, I remembered the old Jones Block, a legendary patch of Shiraz there on Oliver’s Road.

“That’s it next door,” he said, nodding to the south. That’s the vineyard he introduced Julian Castagna to, nearly 20 years before. That’s where Julian chose to take most of the Castagna Shiraz cuttings. You can stand in those vines and look west to the Gulf St Vincent, just around the Cape from Encounter Bay, where those rival French and British sea captains just happened to bump into each other in 1802.

I wonder whether the wine would smell like sailing ships if I’d not known that.

But that fragrance comrade, that bouquet? Ew. Man, you should smell it now! I gotta start my descriptors again …