Since Stephen Pannell graduated from Roseworthy in 1989, he has made wine at Seppelt, Andrew Garrett, Wirra Wirra, and Knappstein. He usually heads north between Australian vintages. He’s made wine at numerous great houses in Bordeaux and Burgundy. He loves working in Barolo in Italy and has done three vintages in Spain.

Pannell worked at Hardy’s Tintara from 1995 to 2003, becoming Hardy’s chief red wine maker before leaving to begin the S.C. Pannell line with his wife and partner, the former prosecuting lawyer Fiona Lindquist.

He made the first of these S.C. Pannells at Warren Randall’s Tinlins on McLaren Flat until he and Fiona bought the Tapestry winery and vineyards from Rob Gerard a few years back.

Since then, Pannell has won the McLaren Vale Bushing King crown twice – in 2015 and 2016 – both with audacious reds containing the Portuguese vintage port variety Touriga nacional. Oh yes, he also won the Bushing previously in 2011. Not to mention the Jimmy Watson Trophy. Twice. But that was years back.

The Bushing crown goes to the best red wine in the annual McLaren Vale wine show.

None of those Touriga-based or influenced reds are anything like vintage port, by the way. They’re more along the lines of what we used to call “drinking wine”. Since then, they’ve been through what the trade called the “bistro wine” and “brasserie wine” phases and seem now free of fad nomenclature to be back to honest, easy, entertaining, hunger-provoking things you can just sit back and drink.

They will, as he says, help the dinner table conversation but never dominate it.

I like that. In fact, a vast proportion of the most talkative winetards, hipstercrites, chefwits and skronky presstitutes from this wine column/blogging racket flounder when they hit S.C. Pannell.

I mean, they’ll rave about it with lugubrious weasel words, but I reckon those types don’t really get it. Like they’ll sit there playing their mouth, scouring their plonkous vocab for words that glorify much more expensive standards from much further away, amazed to see their carefee partners ploughing into the next bottle of something from Pannell’s funky second line.

Since he hoisted his name on that old Tapestry winery on Oliver’s Road in The Vales, Pannell’s been making exquisite wine from Shiraz (of course), Touriga nacional, Tempranillo, Cabernet sauvignon, Nero d’Avolo, Aglianico, Mataro, Nebbiolo (best one in Australia forthcoming), Barbera, Montepulciano, Gewurztraminer, Pinot grigio … you name anything distinctive or noble or brave, it’ll be in there somewhere, often in an unusual but always intelligently-constructed blend.

He’s now planning the importation and establishment of varieties unknown here, which he’s found in Greece, and more recently, Croatia. Stuff he thinks will work in Shiraz-choked McLaren Vale. Or the adjoining Adelaide Hills. He showed me, for example, a barrel sample of the most distinguished and individualistic Shiraz I can remember drinking anywhere. From Echunga.

Intelligence is in everything Pannell does. Not just intelligence gathered, but intrinsic brightness. Like DNA. He’s one of the very few winemakers in the country I would include in my privately-nominated oenological/gastronomic Mensa.

Like great departed wine heroes I’ve known, and loved, personally – think Grange god Max Schubert and the genius Dr Ray Beckwith from Penfolds – Pannell seems buoyed as much as driven by his innate, unwavering faith in his own curiosity. That powers his tireless engine. Endless, persistent, feverish questioning. The pursuit of more. Of further.

But you know what? It’s not that rare vinous IQ that really sets him apart. What sets Pannell apart, and to extreme effect, is his very simple, pure passion.

On the other hand, he’s a bit like, say, virtuoso guitarist Andrés Segovia, but a Segovia who, having played brilliant concert-hall classical and flamenco guitar for one lifetime, suddenly sheds a million ornate, hard-learned and rehearsed trills and arpeggios and counterpoints to switch to good old 12-bar blues and starts again.

With about 95 per cent fewer tricks and flourishes. Fewer dots. Back to three chords.

This is what confounds those pretenders and winey blatherskiters.

The wines Pannell regards as his best never seem to win a gong.

Like, I really enjoy schlücking away at his latest Bushing winner, but he has much more brilliance in his arsenal.

“That’s just a bit of fun that winner,” he says when I ask him of such stuff. “My Shirazes get nothing.

“And like check the stunning Grenache wines now coming out of this district. They’re brilliant wines. But no straight Grenache has ever won the Bushing. Wine shows are all fashion and politics …

“My new Grenache is always far too tightly-wound for them to get it. Like, I know what happens judging shows. You listen to the chairman’s urging to go for new things with elegance and balance and whatever, you know, approachabilty, intensity, elegance, whatever it is they want, but you always seem to end up going for the gloopy-doopy.”

Which his Touriga Cabernet Mataro 2015 blend, the current Bushing Trophy holder, most certainly is not. It’s a dry, almost dusty, bistro-buster. A verandah wine. One can imagine the chairman of judges instructing his or her teams of gun tasters to look for things out of the ordinary and approachable and fun, which in this case they have tried to do, but in so doing missed the beauty of more subtle and carefully-poised wonders elsewhere in the arsenal.

Pannell’s a whizzer in the blending bullring, with all those exotic wonders, but his heart is in our history.

Which is why he’s bought land just over the rise from the revered vineyards the late Bob Hardy owned and nurtured at the oldest winery site in the McLaren Vale embayment at Bob’s home at what is called Upper Tintara, pushed in against the wild Hardy’s scrub off Whiting’s Road to the north-east of the McLaren Vale township.

It’s in a nest, that new purchase: a precious hollow hidden over the hills to the east of Seaview/Rosemount and Kays. Very few know it’s in there. It carries remnants of the old vineyards Dr AC Kelly sold to Thomas Hardy in 1876, bits of old buildings and the remnants of an orchard with long-forgotten strains of quince, pear and even a mulberry tree I recognised immediately as the same type as the famous one on Kangaroo Island – the first European tree planted in the colony. I recognised its shape and leaf, having grown up playing in another one surviving in Kanmantoo since the miners there propagated a cutting taken from that same original KI pioneer a century-and-a-half ago.

“You’re spot on, Whitey,” he said. “That’s from a cutting from that same tree.”

Pannell is ruthlessly renovating and customising the old vines, repairing the damage done by 30 years of mindless industrialisation and brutal mechanical management during the years of economic rationalisation that eventually brought Hardy’s undone and helped lose its penultimate owner, the US-based Constellation Wines, a cool $1.6 billion over a few short years. 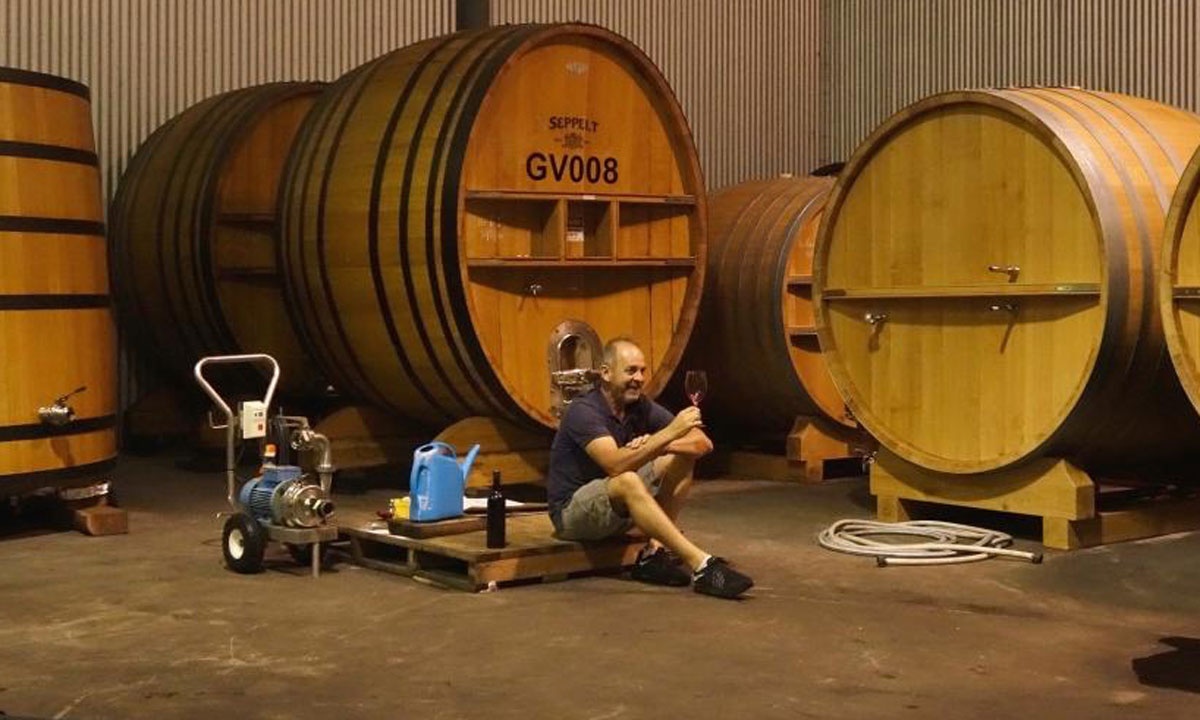 Stephen Pannell with a few of his new barrels and an old one he bought from Seppelts, a previous employer. Photo: Philip White

Pannell’s planting heaps of Touriga in there now, and bits and pieces of many of those exotic names listed. This last wet winter, he spent seven weeks in there alone in the rain, pruning the old ones. Thinking.

Which brings us back to the 12-bar blues. What this remarkable man is committed to, above all else, beyond all that experimentation, is to re-establish the sort of winemaking that same rank industrialisation and lazy fall to turbocharged alcoholic gloop removed from Australian winemaking in the last 20 years.

“I’m picking everything now at 13 or 13-and-a-half per cent,” he says cheerfully.

“That’s all the alcohol I need. It’s all anybody needs, if they think about it. They’ve all forgotten. Or they never knew.

“And every year my profits go into these really big oak vats. It’s like buying a few new cars or a new wooden boat each year. The ratio of exposed wood to wine volume is diminished. This cuts out the sap and caramel and soot everybody seems to like getting from new small French barrels – toasted oak.

“That’s not an Australian flavour.

“And you know what, Whitey,” he continued with a chuckle, cutting me an exquisite sample, “eventually I’ll no longer have to buy a truckload of new barriques every year. These big beauties will outlast my kids. Initially they’re more expensive per litre than new conventional barrels, but once I have enough of them that’s it. Forever, as far as my life goes.

“I’m using them to make all my straight varieties and blends, but most significantly Shiraz and Cabernet blends like I found in the Hardy’s cellars when I started there. Beautiful, elegant Australian wines … and guess what? Nobody understands them.”

I certainly do. It’s what I’ve written about, begging for, over the last two decades. Comrades, enjoy the new wave of “drinking wines” from S.C. Pannell while you prepare to learn our forgotten past.

“I’m not making wine for export,” he said. “I’m making wines for Australia. I want to get us back to our own reality.”

Polish a glass, take a seat, strap yourself in and watch this space. Welcome to the S.C. Pannell time machine.