Chester’s Cube, or as he would prefer it, the d’Arenberg Cube, is already soaring above its surrounding Mourvedre vines at d’Arenberg Winery in the heart of McLaren Vale, a fast 40km drive south of Adelaide.

The five storey, AUD$14 million glass-encased steel and concrete structure was inspired by Rubik’s Cube. The building – an architectural puzzle four modules wide, four high and four deep – seems to float above the ground-floor entrance. The architectural twist is that the two top floors are askew, rotated on their axis, just as if you’d twisted your Rubik’s Cube.

“Both the architects and the engineers say it’s been the most complicated and time-consuming design they’ve ever worked on,” Chester says of the ADS Architects design, yet it’s exactly as he envisaged it in a paper and balsawood model he constructed 13 years ago.

But the structure itself, though a startling addition to the surrounding vine-clad rolling slopes, is just the start of what will be a remarkable assault on the senses of anyone who ventures inside. Although due to open to the public in May 2017, it is sufficiently complete for Chester to provide a guided tour.

The custom-designed entrance door will spin and fold open, origami-style, with feathertouch sensors to ensure no-one is inadvertently squashed as it closes. A sharp left turn leads to a small “wine fog room”, a vinous sensory overload as the visitor is immersed in a thick fog of whatever happens to be the wine of the day: breathe it, feel it, wear it. Osborn is even planning a non-alcoholic fog so children can enjoy the sensation too.

Next stop is the “flower and fruit room” with walls and ceiling smothered with artificial flowers and fruit, and up to 30 flagons containing a selection of the 72 different wines d’Arenberg produces under 60 labels. Each flagon is connected to a bike horn with rubber puffer. Beep the horn and inhale – what a hoot.

“We’re trying to get the senses really alive and excited by now,” Chester explains.

With no time to recover you’ve lurched into the “360-degree video room”. Osborn has hired a full-time videographer to provide the content, with projections intended to make viewers feel as if they’re in the middle of a vineyard with a lifelike soundtrack to enhance the realism.

“We want this to be very stimulating,” Chester says, adding that the space can also double as a dining venue for special occasions. 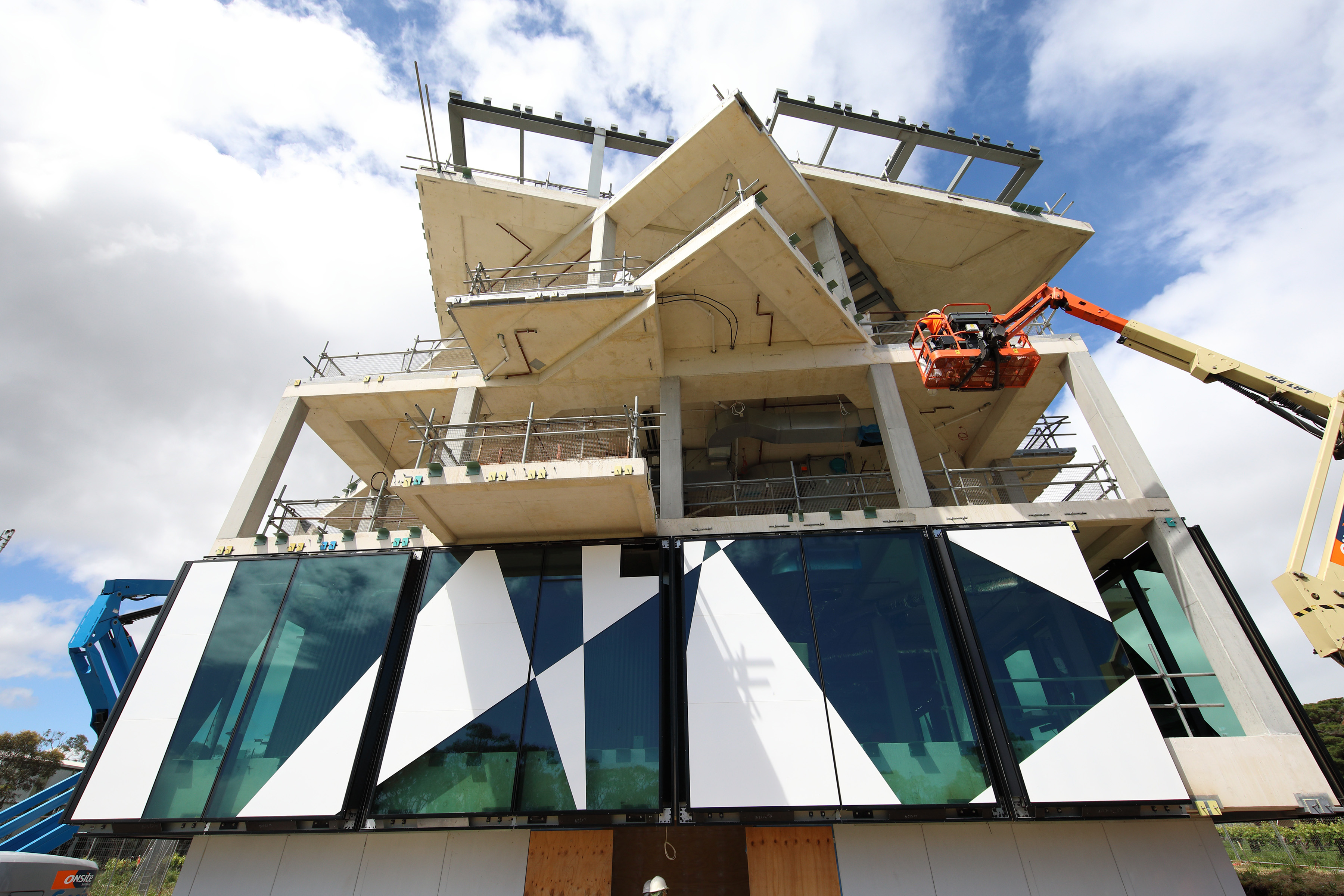 The cube being built at d’Arenberg. Photo: Tony Lewis

Osborn, 54, who says he likes to paint and sculpt when he’s not fully occupied as chief winemaker and futurist for the company his great grandfather Joseph Osborn founded 104 years ago, plans to fill any vacant space with art installations he’s either commissioned or collected over the years.

The first of these is the next stop, an “art installation room”. The room is created to give the impression of being inside a wine fermenter and features an installation by award-winning South Australian artist Jane Skeer of hundreds of dangling VHS video tapes, combined with projections of people treading grapes.

On to the “faces room” with a ceiling covered in representations of grapes and its brick-red walls decked with paintings of faces and bodies from Osborn’s personal art collection – each painting matched with an appropriate d’Arenberg wine.

And that’s just the first floor.

There’s a lift to each floor, but that would mean missing out on the high-gloss stainless steel-mirrored stairwells, a shifting light show depicting the various colours of grapes – red, white, yellow, green – and caricatures of d’Arenberg wine labels commissioned from 30 of Australia’s leading cartoonists.

The first floor opens to the ladies’ toilets, four steel-grey corrugated iron pods that will be totally covered in realistic fake foliage, with hanging chandeliers of grapes above the hand basins. The men’s has similar designs and two larger pods as urinals.

“My own design, very artistic,” Chester says with a cheeky grin. 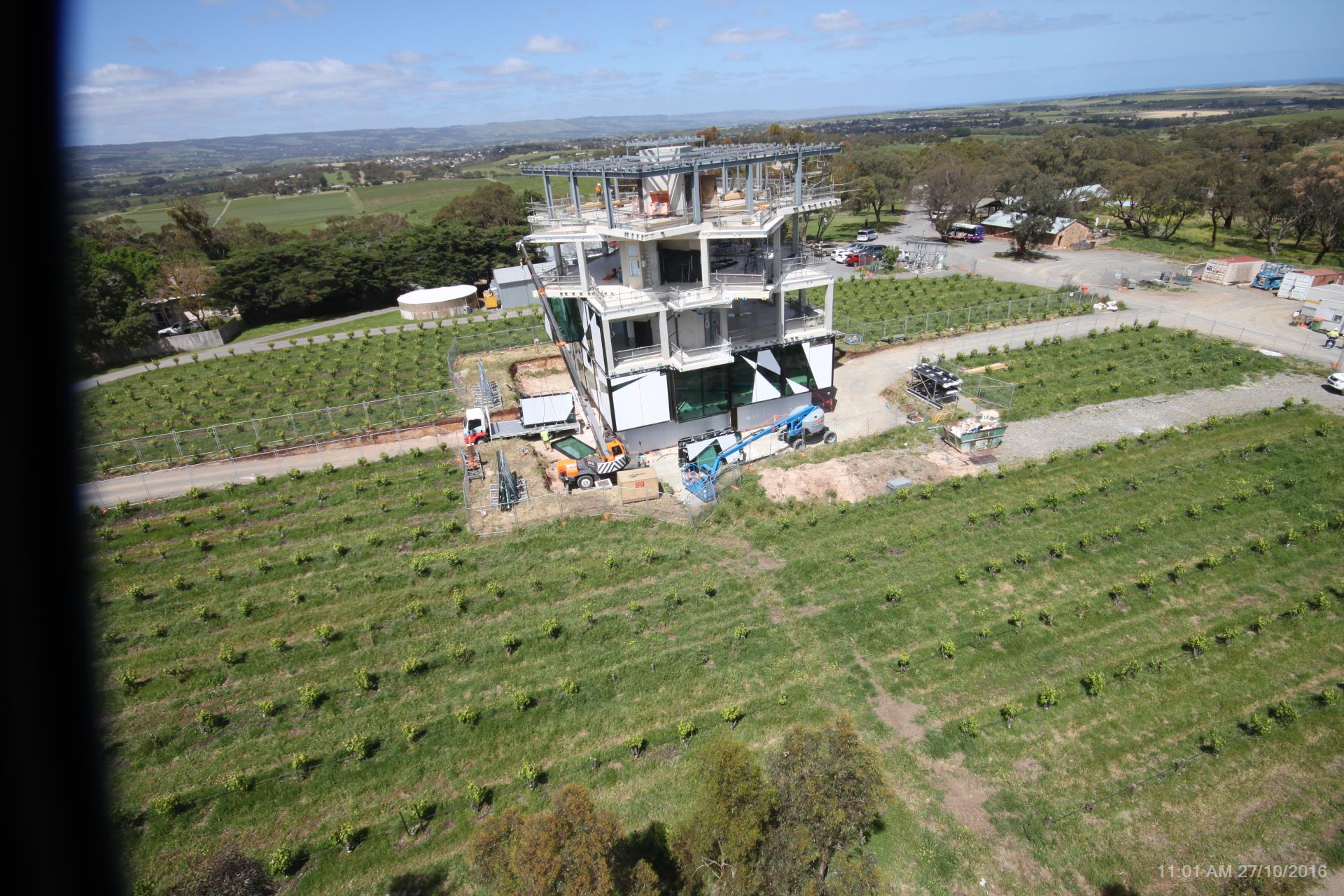 This angle gives a hint about the spectacular views to come.

This floor gets down to business, though, with a large kitchen and dining area that will be used for cooking classes, chef’s tables and so on. In a rare moment of super practicality it also houses an office area.

The second floor opens out to the largest open space in the building where d’Arenberg will move its busy function program that includes tutored tastings, single vineyard and vertical tastings, and blending classes. Here there are also the first two of several private function rooms, hidden behind a shiraz-stained door constructed from the front of a 4500-litre wine vat, that can be used for VIP tastings and dinners.

On to the first of the twisted floors, a design that creates a series of outdoor open spaces, and it’s here that Osborn will locate the winery’s second restaurant, leaving d’Arrys Verandah under long-standing chef Peter Reschke to continue as usual adjacent to the current cellar door.

The fourth floor of the Cube is, in effect, a glass-encased and roofed pavilion with both public and private wine-tasting bars overlooking views of the entire McLaren Vale region. The 16 glass roof panels, each of which weighs two tonnes, feature the same geometric black and white design as the wall panels and are topped with 16 retractable umbrellas for sunny day protection. Even the bars are constructed from glass:

Not surprisingly there are those who see it as Chester’s folly, and Osborn concedes he has at times made both his father d’Arry, and his board a bit nervous.

The architect’s impression of how the completed cube will look.

“Some people refer to this as Willy Wonka’s wine factory, and in a way it is,” Chester says.

“It’s going to change what wine tasting rooms are about.”

But Osborn insists the numbers stack up.

“With 500 acres of organic and biodynamic vines we represent about a third of all McLaren Vale’s premium production,” he says. “And we’re the busiest cellar door in the region with 50,000 visitors a year.”

Despite the wonderfully weird design, business growth was at the heart of decision to build the new cellar door.

“We really needed a bigger tasting area and new offices, and d’Arry’s Verandah restaurant has been full for the past 12 years.

“I just woke up one morning and thought why do we want to recreate fake history, so I sat down and drew this. It took me 20 minutes.”

The Cube will nearly double d’Arenberg’s current workforce to just over 100, adding another $2 million a year to the wages bill, but with wine tourism rapidly picking up Osborn says predictions of 500,000 visitors a year might not be out of the question.

This story was originally published on The Lead.