“Most Australians when they hear the word ‘wine’ think of sweet sherry. Most people still have a bit of a shudder to themselves, too. We have come a long way in a decade from the mid-1950s when the wine boom got going, but there is still, in spite of our progress, a hell of a long way to go.”

While we’re talking personal beauty hints, you might be surprised that one of my secrets is the distillate of witch hazel. After a hot shower, a splash of this seems to tighten those crinkly bruised bits that fester like wet toilet paper beneath the eyeholes.

I never perform this daily ritual without thinking of Barbra Cole. One of the things I remember about the ’80s was taking my new girlfriend Kay Hannaford to Sydney for Tony Bilson’s outrageous wedding to Amanda, a Paul Hamlyn book editor. Kay had arranged for us to stay in her buddy Barbra’s flat beside David Marr’s in Surry Hills. I found my first witch hazel in the bathroom. When I asked where Barbra was, Kay told me I’d get on well with her boyfriend, Frank, and that they’d gone “up the Hunter”.

Being advised by a woman like Kay that a bloke like me would “get on well” with another usually meant that together, our collective wickedness would far outweigh the sum of our individual inputs. Kay’s advice was seamless. The bloke turned out to be Frank Margan.

Although I’d only met him through various shades of claret or golden Semillon in the Hunter Valley, Frank was already an important part of my life, or an excuse for the way I lived it.

In the earliest bit of the ’70s, two items made me vaguely aware of the possibility of writing about wine. The first was Michael Dransfield’s ANZAC day poem, Wine-tasting.

This was a very modern work. Like unabashedly, confrontingly, out-there. Not only did the damn thing look modern, but it felt modern, and it brimmed with dangerously modern content, like the paragraph I quoted at the top.

Paul Hamlyn, the publisher, was famous for the seminal modernity of his work. As one comadre of that age, sweet Gretel Penninger, professionally known as the very stern Madame Lash, warned me, Paul was very modern on the outside, but carried ancient guilt deep within.

Those were the days.

Without its dust cover, The Grape And I was radically white hardbound, clad in a plasticised form of bookbinder’s linen. The illustrator, who is not credited, used that amazing new invention, the felt-tipped pen. The font is far-out sans serif, and there are no line breaks between paragraphs. In its day, this was as dramatic a leap from what went before as the jump from vinyl records to the iPhone.

The dust cover shows a Frank not much remembered: posh, suave, french-cuffed, coiffed, immaculately suit-and-tied. He’s sitting with a suite of old wines in somebody else’s cellar. We remember that bit.

Even today, I don’t have to get far into this work to realise what hot stuff it was.

In his opening chapter, Frank denied the “official fictions” of the day: the notion that Australia’s waves of post-war immigrants changed the country’s deadly boring cuisine and drinking habits. He wrote of how each year, 25,000 young Australians returned from jaunts abroad, where they’d discovered European table habits.

“We were quite a bit pretentious and often crashing bores about our Trip,” he dared to declare. “We spent our time looking for the cheap joints that had a touch of the European atmosphere and scorning the steak and eggs eaters and the tiled pubs swilling out beer. We wanted decent food and we wanted to have wine with it and that created a demand that started today’s jet climb in the wine consumption charts.

“It wasn’t the migrants – if you care to keep your eyes open you’ll find they have switched to beer, or flagon red wine mixed with lemonade or soda. No, it wasn’t them, it was us.”

Frank wrote excitedly about the wine revolutionaries of the day, contrasting the age-old styles of winemaking of the Seppelts and the Germanic nature of the Barossa’s cottage life and its bakers and butchers to the ingress of stainless-steel winemaking equipment and the radical cool-ferment techniques being developed by far-sighted geniuses like John Vickery at the Orange Grove winery now called Richmond Grove.

Frank wallowed in his beloved Hunter, the closest wine region to his hometown Sydney, marvelling at the stainless-steel tanks and centrifuge the young Karl Stockhausen was installing to make revolutionary new white wines – clean and stable – at Ben Ean.

He lauded the red heritage left to the Hunter by that high priest of Australian red, Maurice O’Shea, and gave a loving and colourful description of helping plant the late Dr Max Lake’s now legendary Cabernet vineyard, Lake’s Folly.

“We slept in sleeping bags on the hard floor of the winery loft,” he wrote. “We worked like dogs and not all the wine in the Hunter would slake our gargantuan thirsts.”

I’ve not seen Frank since those days. We would probably have destroyed each other clearing a string of laden tables. The last I heard from him was a message saying that unsigned copies of The Grape And I were worth more than ones he’d autographed and that he wasn’t too well. It was still a sudden shock to hear from his winemaking son Andrew that he’d died of long life in a hospital in the Hunter.

That news brought a wave of contemplation of his amazing effort, and its profound influence on the young Whitey.

Born of a poor Irish family in Sydney’s south-west, Frank lasted a day and a half at his first job as a Water Board clerk. He went instead to work in a pawn shop, where he learned more about the hard end of life. The worth of things. But he really wanted to play jazz trombone and become a journalist.

By the rakish age of 20 he was running the United Press International bureau in London. He came home to become news editor of the Daily Telegraph and then The Sunday Telegraph. He edited People, Australia’s attempt at a pictorial like LIFE, which he bravely purged of the cheesecake girly stuff, and then Gourmet Magazine.

Frank went into advertising where his buddy John Singleton made him creative director at his SPASM agency, where he came up with stuff like Lolly Gobble Bliss Bombs, a blistering commercial success.

With his brother Don, Frank bought the DeBeyers Semillon vineyard and vintage shed in the Hunter, famously dubbed it Chateau Lysaght after the galvo manufacturer and promptly won a special recommendation at the Royal Sydney Wine Show.

After rebuilding and running Bali’s famous Hotel Tjampuhan in Ubud, Frank taught himself to cook, annually doing a six-week stint at La Rive Gauche in Nice. He established The Cottage restaurant in the Hunter, where I first met him, and then Le Cabanon in Angel Place, Sydney, where he perfected his deadly lobster bisque.

Frank wrote six other books, from My Baby Was Blasted to A Pictorial History Of Surfing.

This breathless progress eventually took him back to the Hunter with his partner Barbra. Until his final illness he worked at the grand Margan winery/restaurant complex his brilliant son Andrew established.

No average wine has ever borne that Margan brand.

As his family said in Frank’s obituary notes: “Like all good print journalists there was a love and reverence for words and the disciplined pattern of their use. He lamented the death of journalism way before its analogue cremation … unlike sport we don’t honour our past journalistic greats: they just slip off into anecdotes over drinks amid an implacable fading of the light of relevance as the great media band wagon moves on. It hurt him, hurt him a lot.”

So my morning witch-hazel application has become a respectful Buddhist ritual, after the philosophy dear Frank learned to love all those well-lived years ago in Bali.

It may not be keeping me beautiful, but it’s refreshing, renewing and it smells good.

I shall never forget this hungry, thirsty, bright mate that Andrew best described at his funeral as “belligerent, obstinate, proud, compassionate, understanding and self-effacing”.

Thanks eternally, dear Frank, for helping Australia’s literary gourmands and gluttons come such a long way in those fast decades since the wine boom got going in the sherry-sodden ’50s.

Don’t worry about the trombone. You were a beauty. 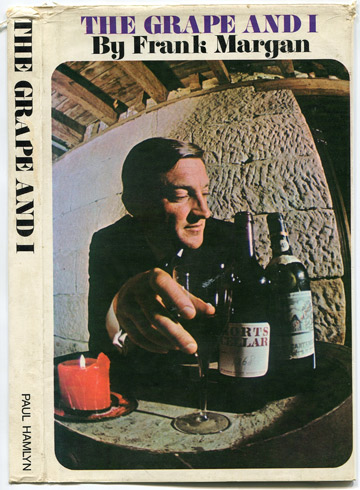 The front cover of Whitey’s copy of Frank Margan’s book ‘The Grape and I’. Photo: supplied