John Gilbert makes By Jingo wines from selected vineyards in the South Mount Lofty Ranges, the Murray-Darling Basin and his beautiful little home patch in the hills south of Mount Barker.

While his tinctures are always a personal favourite of this writer, I’d never really sat down and had a proper listen to the man. Like discuss work. His zany labels. His wild selection of varieties, most of which he learned about while winemaking in the islands of the Mediterranean.

So yesterday I called in and turned on the recorder. Here’s the unexpurgated transcript of our chat, which took one bottle of his lovely Gruner Veltliner.

How would you describe life as a winemaker in the Adelaide Hills?

What are the major challenges here?

“And wildlife. I got about 60 kangaroos that come in there and munch all the young stuff. They love it. I’m happy with them. Thomson’s gazelles. And we got springbok. And the little Rhodesian ones. Smaller ones. Not too bad. And sheep. Dorsets. Polls. News polls. North poles and south poles. Bit of both, I think, they mix them up.

“It’s like the red gum and the blue gum. I don’t know how you tell the difference sometimes. I mean, is one red and the other one blue? As a juvenile, it’s easy.”

“2016’s awesome because it’s been so dry. It’s the driest. Last year, building up – leading into Christmas – hottest 12 months on record. We haven’t had a lot of soil moisture since 2011. To replenish that’s gonna take a year of good rains at least to build up that surface moisture.

“Fortunately, I’ve got a little bit of irrigation that I’m bloody happy with. Otherwise it would have died. It’s so bloody hot and dry. It’s not just the dry but the heat. You know: not a lot of rainfall this year. Or last year.”

Given the potential of it to get worse, do you reckon you’ve planted the right varieties?

“Yes. And no. I’ve got varieties that are surprisingly able to ripen. Like Monty. Montepulciano. That’s the variety that performs best in the Adelaide Hills for me. It’s a good site. It’s got good aspect. Good drainage of air. I’ve never had a frost out there. Good variety, Monty. Negro amaro’s okay. Grillo’s a goer. I’ll sing you a little rap if you like.”

Do you see a future in export?

“Export? No. I think the local market’s the one. I mean, I love China because I love Chinese and it tastes good. I woulda liked it if they’d stuck to the old school before Mao Tse. Like the old empire.

“I think Montepulciano’s gonna be huge in China. They’ll plant it. It’s gonna take off big-time. Dial up a site and … no. I don’t think so, Whitey. I don’t think they’re gonna make great wine unless it’s small batch stuff. So I suppose you could export to them if you wanted to.”

“Very good question. Mmmm. There’s a couple. But for solid winemaking from a good base I’m gonna say Mark Lloyd. He’s the guy that holds the reins. Coriole. He’s such a giving person. Awesome. Always thinking of something. Knows how to dance. He can tango. Not many winemakers can do the tango. You can tell they’re serious if they can tango. Like, how many Yarra Valley winemakers can tango? De Bortoli? Am I allowed to say that?” 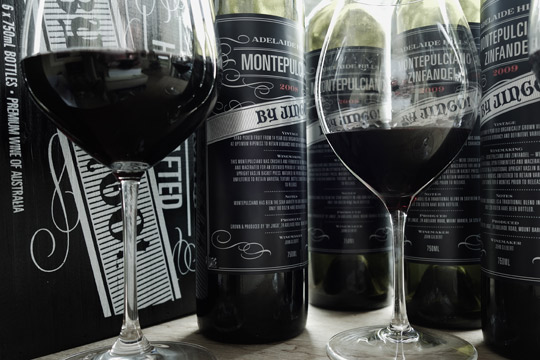 How do you go with your brand, By Jingo, and all these varieties that nobody’s ever heard of?

“Well if you asked, what’s that fellow that writes about wine? The other fellow. If you asked him, he’d say: ‘Awesome booze. Very good vintage port style.’ He’d say: ‘Ridiculous label. Equally ridiculous bottle. I don’t know how John Gilbert expects to sell this.’ So I think with that support, I think go for it. It works for me. People collect the bottles. The package itself. Just to have their olive oil in it. In the kitchen. Candles. You get a lot of depth in your marketing. People that want empty bottles.

“By Jingo? I don’t think that comes into the equation. I don’t think anybody knows what it means. I should have a little story on there, like why I call it By Jingo.

“My great-grandad, when he was about 97, one cigarette a day. Have a cup of tea at three o’clock in the afternoon. Read a bit of poetry or whatever. He was a left-handed boxer. Very tricky southpaw. Bit of a hard nut, I reckon. He used to say: ‘By jingo that was a beauty that one. I remember that time. She was a beauty. By jingo she was a beauty.’ He’d never say ‘Christ’ or ‘Goddam’ or anything like that. Like today, she’d be just FC. Expletive deleted. F triple A.

“But my labels? That Gruner label’s not the right colour. It’s a bit more khaki. When we go to the printer, I say: ‘Can I have a look in the bin?’ They put more labels in the bin than their actual print job. So I go to the bin and get a roll of labels and I get enough to put them on the boxes as well. And for bags and promo and stuff. Always lucky to have some extras on a roll.

“We have our posters. We do special days here. Three or four times a year. We’re thinking of having one in March. First weekend of March. And then a post-vintage lunch in May. Sit-down job.”

How do you see the future?

“I’m not much of a one for predicting the future. If I did I wouldn’t be sitting here right now. I’m surprised at the fact that I’m still alive. Future? Something will happen. Change. There’ll be a lot of change. Change is the only constant as far as I’m concerned. To stay the same takes as much energy as it does to change.”

Do you think Chardonnay’s ever going to catch on?

“I hope so. Wouldn’t that be nice? If it was as big as Riesling, that’d be awesome. One day maybe. One day. I’d plant it in the shade, when there’s afternoon shade. Flinders Ranges. In the Gammons. Nice shade; nice and dry. Nah. Best place is right on the coast where you get the sea breezes all day and all night. Day time temperature’s 24; night time temperature’s 22.”

How do you feel we’re going with this interview?

“Real good. Oh it’s tidy. Tidy as, man. But in closing, I should say what I aim for in my wine. I want Funky. Good length and balance. Concentration. Lower alcohols. Funkier. Cheesier. Personality. Less upfront; more refreshing. More varietal. Thanks for coming on the show.”