It’s approaching midnight, close to zero degrees (feels like -10) and almost pitch black as we follow our guides across uneven terrain on top of a 1000m-high hill in search of stellar enlightenment.

There’s no artificial white light allowed here – not even the glow of a phone or headlights on the access road – but it’s surprising how quickly your eyes adjust to the blackness.

Tredding carefully and with the help of small, tour-issued red LED torches, we make our way to the first telescope, where I find myself transfixed not just by the sky above, but by the sight of the shimmering lake below, bathed in black, and the snowy mountains glowing ever so faintly in the distance.

It creates a frisson that is perhaps only relatable if you’re the kind of person who gets more excited by icy, rugged landscapes than by tropical beaches with waving palm fronds.

Mount John, located at Lake Tekapo in the Mackenzie Basin on New Zealand’s South Island, is prized for stargazing because of the surrounding area’s lack of light pollution and the visibility of celestial objects.

The 430,000ha surrounding the Mount John Observatory has actually been declared as a Dark Sky Reserve by the International Dark-Sky Association – the first such reserve in the Southern Hemisphere and the biggest in the world.

The observatory itself, operated by the University of Canterbury, has a number of powerful telescopes which are used for research purposes by astronomers, with regular night tours hosted by Tekapo-based Earth & Sky giving an insight into their work.

Before departing on one of the winter tours, we are issued with what are described as “US Antarctic expedition jackets that really went to Antarctica” – and they definitely prove necessary when you’re standing outside in the freezing cold awaiting a turn at one of several large telescopes. Steaming cups of hot chocolate also help take off the chill.

Cloud cover can put a serious dampener on things (better to postpone your tour until you get clear skies), but on this night we were in luck, able to see in close-up the Southern Cross, Saturn, the colourful Jewel Box cluster and, most clearly and magical of all, the Moon, with each sighting accompanied by tales of astronomical wonder shared by the enthusiastic guides. 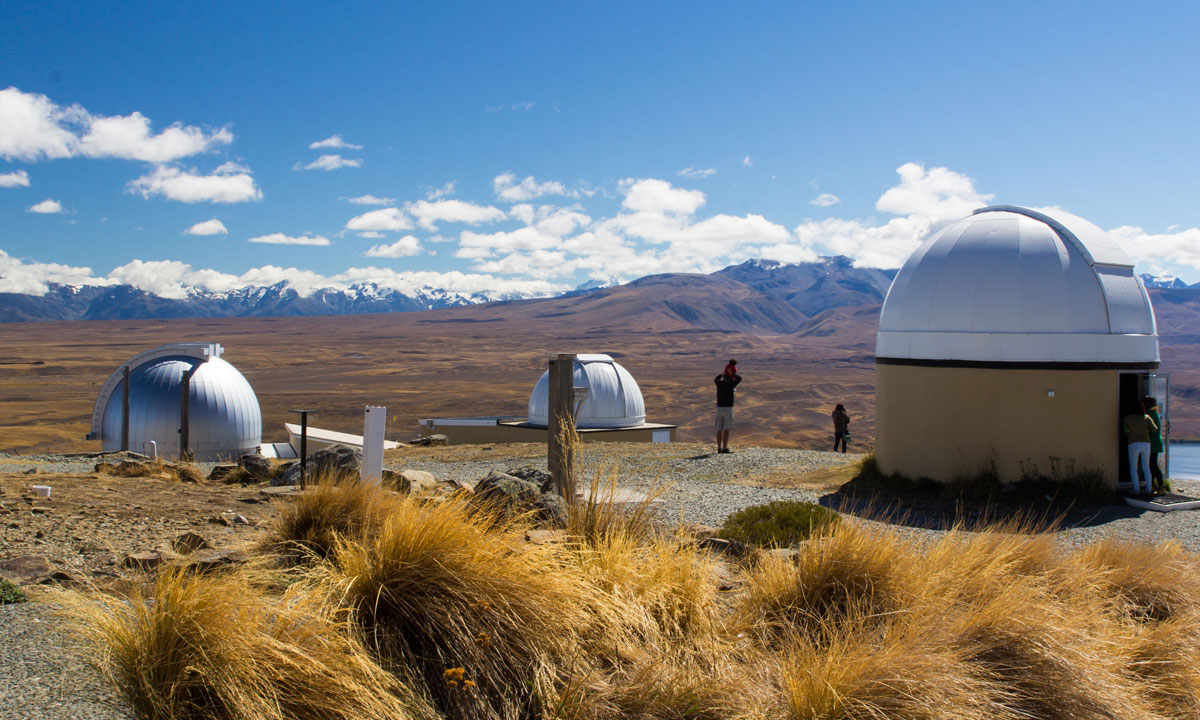 From the top of Mount John, the little town of Lake Tekapo – permanent population around 370 – is just visible in the dark of night. It is subject to outdoor lighting controls that ensure “light pollution” doesn’t affect the astronomical experience and research at the observatory.

For many tourists, Lake Tekapo represents a mere coffee and photo stop on the inland route from Christchurch to Queenstown, or perhaps on the way to Aoraki / Mount Cook National Park (just an hour’s drive further on), but the starry, starry nights are just one reason it’s worth stopping for a night or two.

The township itself sits on the edge of a glacial-fed lake – Lake Tekapo – which in daylight is even more transfixing. Its turquoise blue hue is the result of finely ground rock particles which come from the glaciers that feed it and are suspended in the water.

With pink and purple foxgloves flowering along its shores, snow-capped alpine peaks at the rear and the picturesque, circa-1935 stone Church of the Good Shepherd in the foreground, the lake setting is picture-perfect … once you crop out the other pesky tourists also trying to get a snap of the small church or skim stones on the glass-like water. 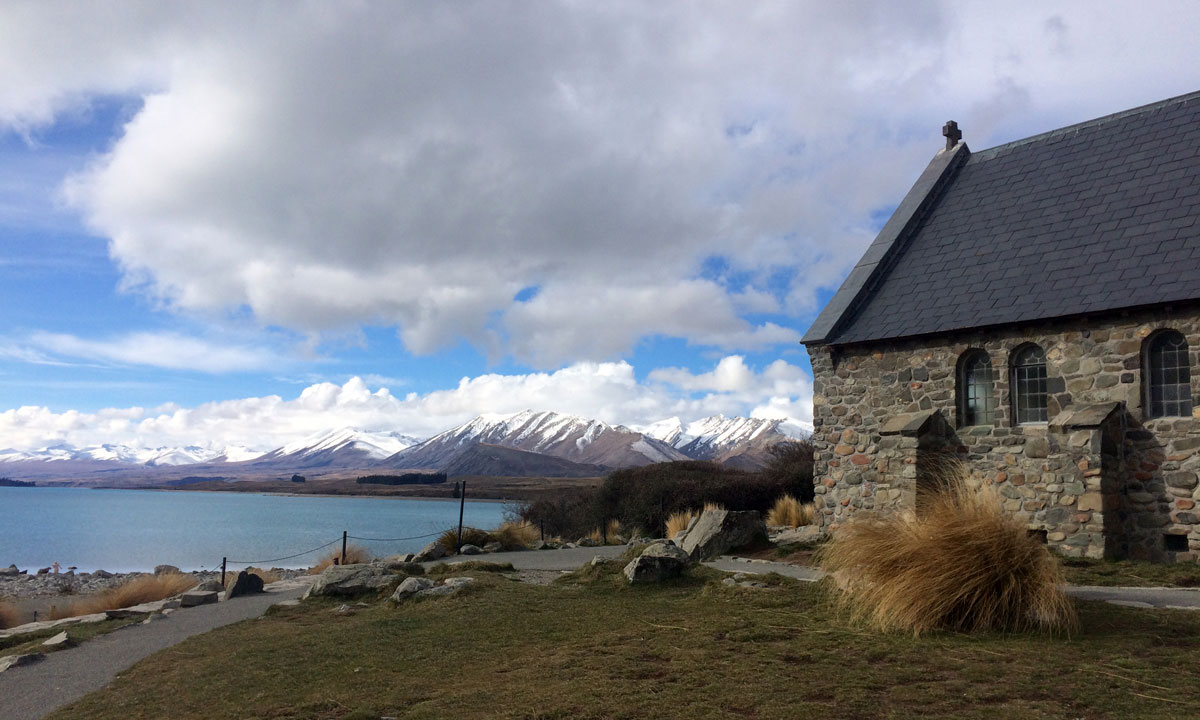 The Church of the Good Shepherd. Photo: Suzie Keen

Earth & Sky isn’t the only business making the most of the area’s astro-tourism potential, with the nearby Tekapo Springs, at the base of Mount John, also offering a two-hour star-gazing experience. What it lacks in high-powered telescopes, it makes up for with “floating hammocks” in a 38-degree hot pool.

The hot springs opened just 10 years ago – a year after its owners also launched a new ice rink in the same location that New Zealand’s first official ice rinks were created around 1935. It’s continued to grow and now also includes a waterslide and snow tube park, but for those who simply want to enjoy a relaxing soak looking out over the lake and mountains, early evening is an ideal time to visit.

A lesser-known attraction for winter visitors with an extra day or half-day to spare and a hankering for some snow is the Roundhill Ski Area, located at the end of an access road along the eastern side of the lake. 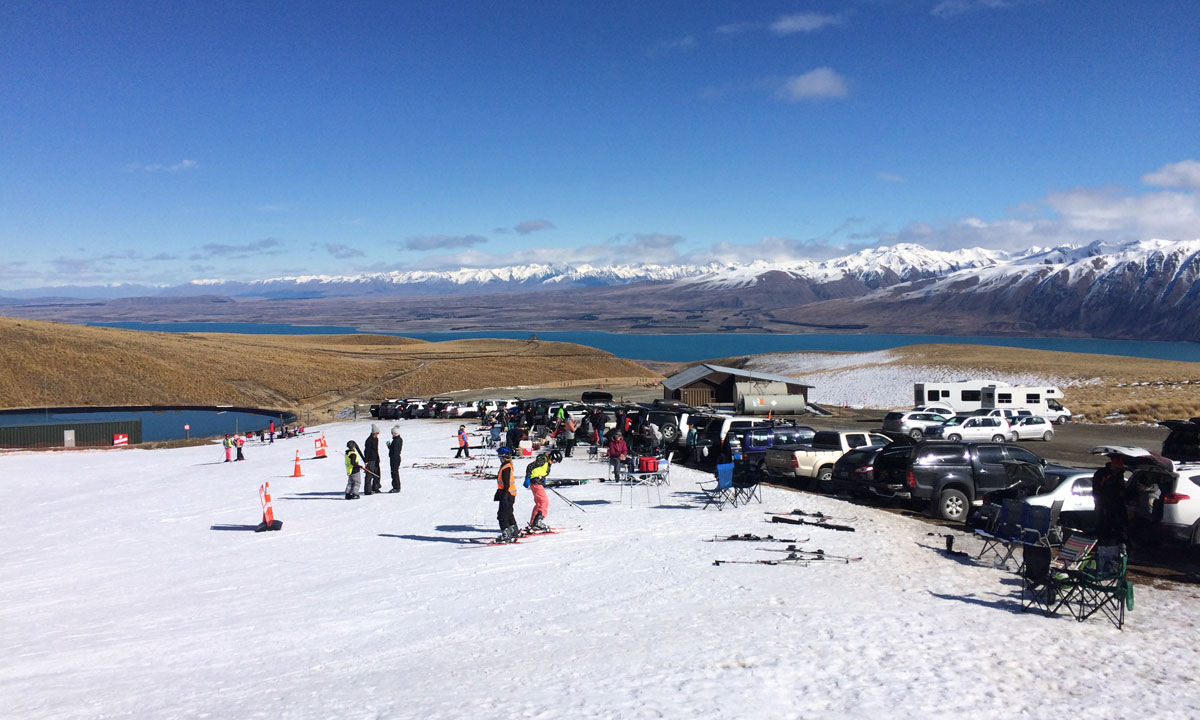 Ideal for beginner skiers, families and those who just want a snow fight – although it does also offer some more challenging runs – Roundhill opened in the 1960s and was originally used only by local farmers before becoming a commercial operation.

There’s been major upgrades in more recent years, but it still offers a very different kind of experience from that found at larger, more popular skifields in places such as Queenstown – and the panorama over the lake to the Southern Alps is breathtaking.

For a real bird’s eye view over the entire Mackenzie Basin, Tekapo-based Air Safaris operates scenic flights that take in the mountains and glaciers of the Aoraki Mount Cook National Park, remote high-country sheep stations, and the stunning lakes and rivers of the basin.

Whether you decide to reach for the skies or the skis, or simply soak in the hot springs, just make sure you stop awhile to drink in the beauty of this central South Island gem. 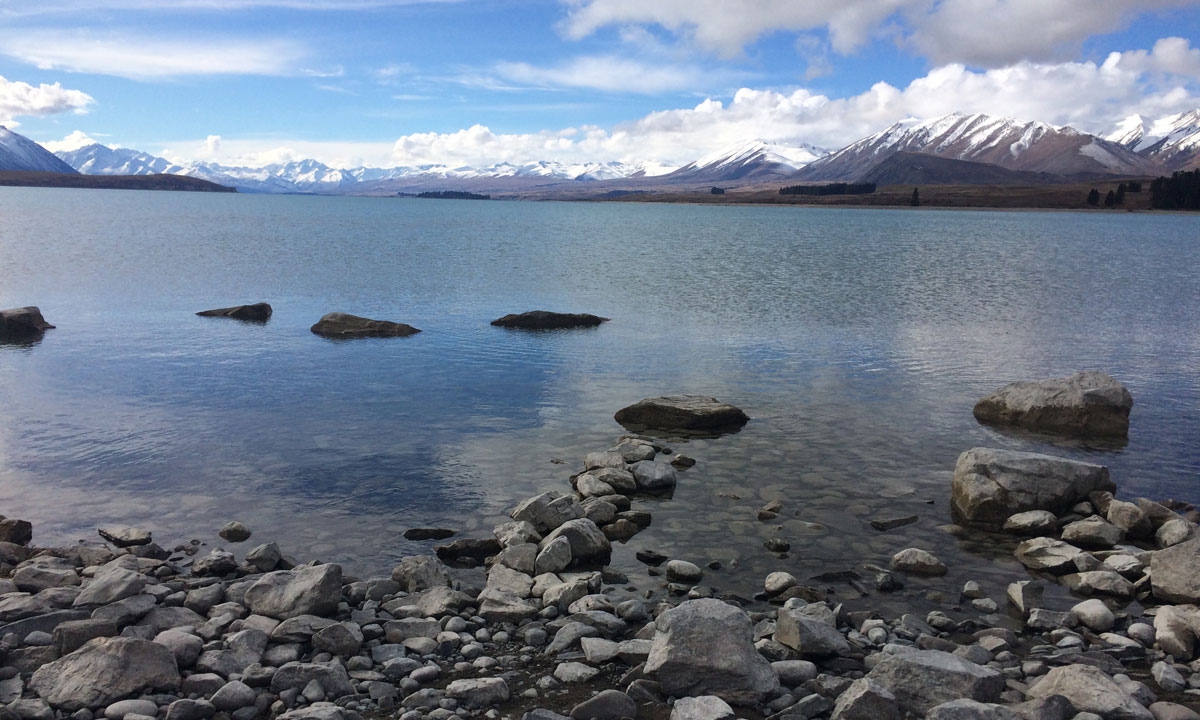 Why so blue? Lake Tekapo is one of three glacial-fed lake in the region. Photo: Suzie Keen

Getting there: Lake Tekapo is around a three-hour drive from Christchurch and 2.5 hours from Queenstown. More information about getting there and getting around the Mackenzie Basin can be found here.

Staying there: The writer stayed at the Peppers Bluewater Resort at Lake Tekapo, but there is a wide range of other accommodation options available including camping and a backpackers’ lodge.

While you’re there: If you’re impressed by the colour of Lake Tekapo, make sure you keep driving for at least an hour on State Highway 8 in the direction of the Aoraki Mount Cook National Park until you come across Lake Pukaki. This is the largest of the region’s three glacial lakes (the others being Tekapo and Ohau), covering some 178sqkm with a spectacular alpine backdrop including Mount Cook itself. Continue on to the national park and you can easily spend another couple of days exploring some of the myriad alpine walks and glacier adventures available around Mount Cook. At the nearby town of Twizel, fans of The Hobbit and Lord of the Rings can also join tours taking in locations from the blockbuster movies.

The writer travelled at her own expense.