The helicopter dips and circles close to the earth as it searches for its target in the South African scrub, while we watch from the safety of a vehicle some distance away.

We’ve turned location services off on our phones so our whereabouts can’t be traced, and are accompanied by two guards carrying rifles.

Already this safari is nothing like what I expected. Later on another guest will compare it to something out of a movie.

Within minutes we get that word the chopper’s found its target – “we’ve got one, let’s go”.

The sight of the aircraft dipping low to the ground remains so impressive on approach that at first I’m too distracted to notice the white rhinoceros emerging from the scrub.

She tries to get away but a bright red dart is already stuck to her backside, skilfully deployed by a veterinarian in the chopper’s passenger seat.

We coo and gasp as the young, 1.6-tonne creature trots by us and comes to a rest on the ground.

Our group is on a conservation safari at Madikwe Game Reserve, in which the rhino’s DNA will be collected and her ears notched.

It’s an important exercise but not a cheap one, and as such it’s largely funded by guests at the park’s 30-plus lodges paying for the experience.

Ryan – a volunteer with the counter-poaching unit who has been been given a pseudonym – says they give each rhino a unique notching to help monitor and care for the population.

The DNA is added to a database, which can be used to help catch and prosecute poachers who kill the park’s endangered black and white rhinos for their horns.

Ryan says poachers are savvy, which is why we’ve disabled location services on our devices. We don’t want to inadvertently help them find the rhino if we share pictures and videos later.

“They are extremely organised, we compare them to the drug cartels in South America where the structures and infrastructures are put to place,” he says.

“People are being hired now by the syndicates to go and shoot the rhinos so it’s guns for hire, basically.”

Madikwe, a 75,000-hectare reserve next to the Botswana border, has lost at least two rhinos to poachers this year and 71 since 2010. 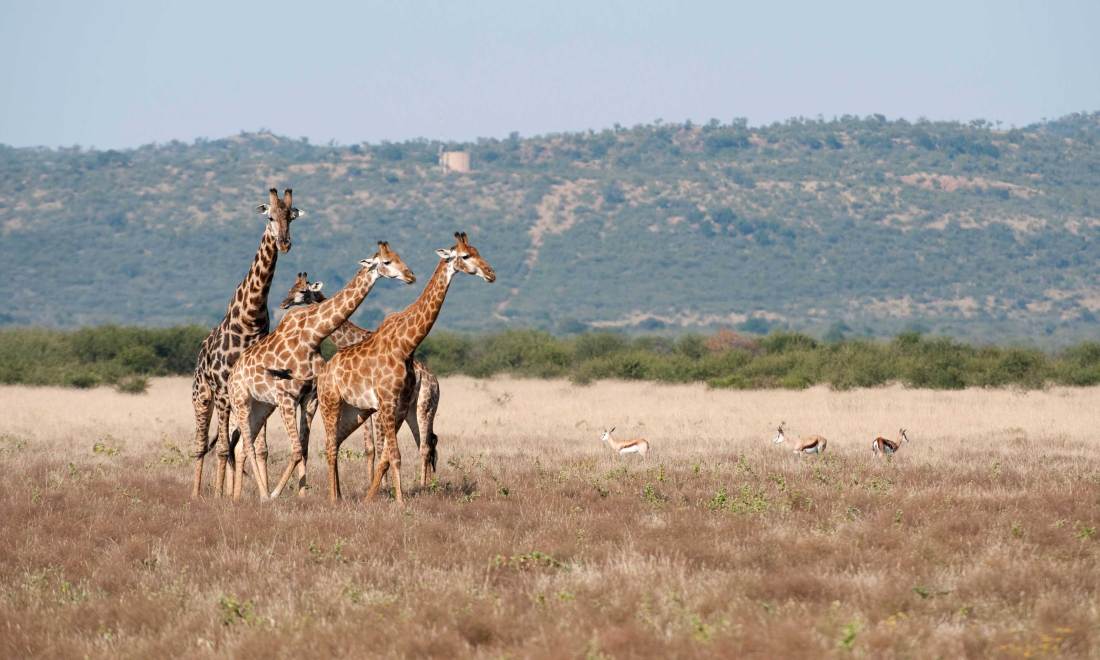 But today the armed guards are actually around to protect us from any unexpected elephants and lions as we clamber from the vehicle and walk towards the unconscious rhino on the ground.

The veterinarian, his assistant, and two counter-poaching volunteers begin working quickly, and we’re each tasked with helping to collect a different DNA sample.

It’s an unforgettable and moving experience to get so close to the animal, and witness first-hand the work of the staff and volunteers dedicated to ensuring her survival.

We’re encouraged to feel the rise and fall of her enormous chest, her rough, leathery skin, the soft patches behind her ears and between the rolls on her legs.

“I hope you stay safe, little girl,” another guest says as she gently pats the rhino goodbye.

When we climb back into our vehicle I’m dazed and awed by a once-in-a-lifetime experience that all unfolded before breakfast, over less than an hour.

We watch the rhino stand and disappear into the scrub, and I wonder what her future holds.

While the average life expectancy of a white rhino is up to 45 years, our guide Armand says some estimates put the animals at risk of becoming extinct in 10 to 15.

There is, however, hope in devoted staff and volunteers like Ryan, who is all packed up and leaving for the next job within minutes of the rhino waking.

“I see us as being in this world as guardians of nature,” he tells me later.

“And these rhinos and elephants and lions cannot really look after themselves because they’re up against armed poachers, so it’s up to us to guard for the next generation.”

Getting there: South African Airways and Qantas both fly direct to Johannesburg with return flights starting at about $2049 per person.

From there, Madikwe Game Reserve is roughly a three-and-a-half hour drive or a one-hour flight with Federal Air.

Staying there: Jaci’s Lodges offer a range of accommodation options, including tented, treehouse and family suites. All include twice-daily game drives, brunch, afternoon tea and dinner. Rates start at R 7965 ($A831) for the treehouse and tented suites during the high season, with prices rising during the January to December peak season.

Playing there: Try to spot the Big Five during game drives, explore Madikwe on foot during a walking safari, or relax with a drink at one of the lodge’s outdoor areas. If you’re after an experience that helps make a difference, you can get involved in rhino DNA collection during a conservation safari.

The writer travelled as a guest of South Africa Tourism.