A fierce woman named Svetlana is telling us all to stick out our tongues and pant as we lean forward. Without a single exchange of questioning glances, we’re all doing it.

Svetlana is small, but the force of her will is enormous and she has us all enthusiastically panting, our bodies bent at 90-degree angles, tongues hanging out like labradors in the middle of a heatwave.

The bizarre scene, which is bathed in an eerie blue light, is made even more strange as sharks, stingrays and schools of fish glide by behind Svetlana.

Welcome to underwater yoga – and if you’re just coming for the photo you’re in for a rude shock.

On mats rolled out on the stone floor of the Lost Chambers Aquarium at Dubai’s underwater hotel Atlantis The Palm, our group of 20 or so holidaymakers are put through our paces.

On three sides soaring glass windows offer unspoiled views into one of the largest aquariums in the world, home to more than 65,000 marine animals.

To get here we walked through a labyrinth of stone tunnels filled with tanks showing tiny clownfish, bobbing jellyfish and an albino alligator who is busily warming himself on a large rock. Above our heads, in a menacingly lit clear glass tank, a pod of pregnant lobsters were busy protecting their eggs.

For anyone with a level of fitness above rationalising that running for the bus counts as exercise, the session probably isn’t that hard. For me, it’s a challenge, but an oddly relaxing experience; the graceful sea animals and haunting music make it hard to pay attention to my screaming muscles.

In fact, the aquarium, which stretches along one side of the Dubai luxury resort, makes it hard to pay attention to much at all. 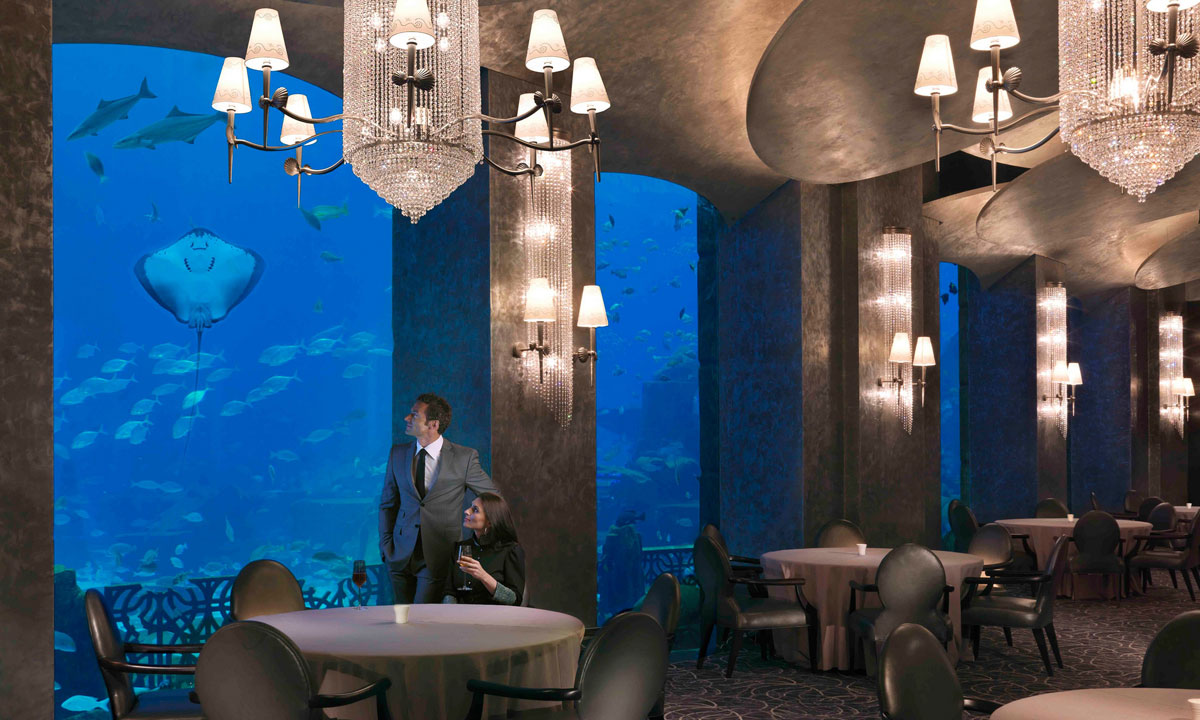 In the hotel’s ritzy restaurant Ossiano, my eyes are torn between the bartender in front of me and the floor-to-ceiling windows into an aquarium that I’ve spent the better part of a day looking into.

I’ve ordered a Pearl Diver cocktail, which I immediately regret when I see how much work the bartenders have to do to create it.

Two of them are working in tandem, straining the mixture, shaping shaved ice into semi-circles, and placing a hard ball – that they warn you is filled with liquid – into oyster shaped glass dishes placed next to your glass.

When one of our party gets a shock from the liquid ball shooting down her throat, the bartender profusely apologises and gives her another.

Ossiano is the kind of place that thrives on the creation of extravagance, and the ridiculously attentive staff won’t stand for any kind of sub-par experience. You’re here for your tastebuds to be pampered after all.

Unsurprisingly, the underwater restaurant specialises in seafood, holding the impressive moniker of serving Dubai’s best for four years running. Every week its French chef serves up 40kg of seafood to guests who dine while gazing into a tank of marine life – which is superb, as long as you don’t think about it too much.

It’s a uniquely romantic experience and the restaurant has spurred more marriage proposals than any other spot at the hotel – one suitor splashing out over $A20,000 on dinner before getting down on one knee.

Across the tank from the underwater diners sit the resort’s two famed underwater suites, whose bedrooms and master bathrooms also look into the 11-million-litre aquarium.

Atlantis teems with people from every walk of life outside the doors of these suites, but inside it’s remote and you feel like you’re the only person on earth. Sitting in the deep bath and gazing into the tank is mesmerising until a 350kg stingray glides past just centimetres from your face and your shriek spoils the serenity.

Relaxing, rich, romantic, remote – a few days spent living next to the ocean floor is a unique experience and a world away from the everyday.

In the classic Disney film The Little Mermaid, a red Jamaican crab named Sebastian sings that life is better under the sea and emerging out from under Atlantis into Dubai’s searing heat, you begin to see his point.

Getting there: Dubai is around a 13-hour flight from Adelaide with Emirites.

Staying there: Atlantis The Palm is a five-star hotel with great access to the beach, luxurious pool facilities and an action-packed water park. The resort is also home to world-class restaurants and bars. Prices start at approximately $A320 per night. For more, visit atlantisthepalm.com

Playing there: The hotel offers underwater yoga, an underwater restaurant and, for the very brave, an aqua trek where you can walk among the sharks and stingrays as you breathe through a bubble on your head.

The writer travelled as a guest of Atlantis The Palm, Dubai.