I take a sip of the potent golden liquid – banned in Australia – and am assured months-long alcoholic fermentation in rice wine breaks down the serpent’s poison and won’t leave me with a stinging hangover.

This venomous vino certainly has bite, and turbo-charges virility according to traditional Chinese medicine – the natural aphrodisiac has been used in Asia for centuries.

Maybe the Vietnamese Nguyen dynasty’s second emperor Minh Mang, who allegedly had hundreds of wives and 142 children, used it as his secret weapon. 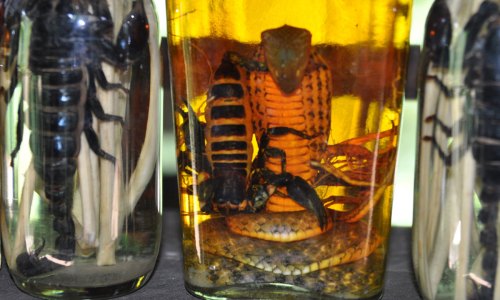 It’s whisky … but not as you know it.

This tiny village in southern Vietnam’s Ben Tre province is one of many that produces the reptile-infused liquor, but as I travel further north I’m reminded this country has a deadly history that has nothing to do with snakes.

Still known as Saigon to locals, Ho Chi Minh City used to be nicknamed the “Pearl of the Orient” by French colonists whose architecture adorns its tree-lined boulevards.

On top of the French, the Vietnamese have fought foreign invaders from China, Japan and the United States during its long and bloody struggle for independence, with their most recent occupier leaving a sinister and enduring legacy.

During the Vietnam War, US military planes sprayed around 75 million litres of chemical agents over the country to destroy vegetation and deny the communist enemy forest cover. The most common defoliant used was Agent Orange, and its devastating effects are still felt by generations of babies born with serious birth defects today.

The fallout can be seen in the homeless disabled children on the streets of Saigon, and in the harrowing images at The War Remnants Museum that brought myself and US veterans in their sixties, who had returned to ground zero some four decades later, to tears.

Nearby I wandered past an old craggy building’s rooftop where a photojournalist had captured the most iconic moment of the US withdrawal in 1975. A CIA helicopter collected desperate evacuees clambering up a ladder the day before Saigon fell to advancing North Vietnamese troops.

On the outskirts of that former US stronghold are the legendary Cu Chi Tunnels, a 250km-long underground labyrinth linking several villages and thousands of communist troops during the Vietnam War.

Viet Cong forces used this honeycomb network to house soldiers, treat the wounded, transport supplies and protect villagers during US bomb raids. From here guerilla fighters lay booby traps and mounted surprise attacks, after which they’d melt away into the jungle and disappear underground to safety.

The staccato of gunfire startled me as we wandered through the humid forest marred by real bomb craters – tourists can fire 10 bullets from either a Soviet-designed AK-47 or an American-made M16 at a nearby firing range for $A30.

VC soldiers had to crawl along the ground in the deepest of three tunnel levels, breathing air through 10m-long bamboo pipes connected to vents on the surface camouflaged as termite mounds.

Bent over double, I inched my way along the first dark, hot, narrow level and was overwhelmed by the fortitude and ingenuity of the mostly peasant farmers who took up arms and braved a miserable life of mud, malaria and snakes to defeat the mighty US army.

The decades-long war is etched in Vietnam’s modern memory, but on an afternoon bike ride back in Ben Tre we caught glimpses of a peaceful village where people are getting on with life.

The lush countryside is now dense with bananas, okra, jackfruit, cucumber and cherries growing by roadside fields. We weren’t wearing helmets, but I was more concerned by the risk of falling spiky durian fruits hitting my head from overhanging trees than going over the handlebars.

Roosters crow, motorbikes rumble and karaoke from a local house echoes through the thick jungle. Bare-chested men gamble over cock fights in the street while others take naps in hammocks.

Hammer and sickle flags dot the highways on the way back to Saigon, but that metropolis now has slick capitalist advertising that makes you question who won the war.

My new Vietnamese friend, who wanted to be known only as P, tells me she’s a proud communist but doesn’t want to talk about the government over our snake whisky.

P’s mother was just 15 when she left her village on Vietnam’s south-central coast to join the VC resistance as a nurse. Her aunt joined too, but died and never made it home.

The young woman now works in the thriving tourist industry, and says she happily welcomes Americans.

Getting there: There are no direct flights between Adelaide and Ho Chi Minh City, but it is a nine-hour flight from Sydney or Melbourne and about 12 hours from Brisbane. Webjet Exclusives offers a nine-day Vietnam tour with Air Asia flights costing $999 per person from Sydney and Melbourne (surcharges apply from other states).

Playing there: The Cu Chi Tunnels and the War Remnant Museum offer an insight into Vietnam’s violent history, or take a boat ride along the Mekong Delta to visit the CaiBe Floating Market and bike ride through neighbouring villages.

The writer travelled as a guest of Webjet Exclusives.