It is a disconcerting truth that many of the cities we consider to be most romantic have a brutal and troubled past.

It could be that these places retain a sense of history because they once were centres of power and wealth. And with power comes trouble.

Of course, this is true of Paris – the spiritual capital of romantics, whose streets have been regularly soaked with blood through its long history, from internecine religious brutalities, to the commune and the revolution, the Nazi occupation and, most troubling to the modern visitor, a regular and recent outbreak of terrorism.

When I was there last year, the city remained at the epicentre of the French state of emergency, sparked by the terrorist atrocities of 2015 at the offices of Charlie Hebdo, the Bataclan Theatre and the Parisian suburbs.

Since I was last in Paris in 2014, there were obvious signs of change: police wore bullet-proof vests, squads of soldiers patrolled central areas with weapons drawn, and visitors were searched and scanned before being able to get near some museums and attractions.

Mostly, though, Parisians seemed as they always were: proud and present on the streets of their beautiful city, dining on footpaths behind the flimsiest of bollards or none at all; dancing by the banks of the Seine; browsing through street markets; lying on the prescribed pieces of grass in manicured gardens; to the passing eye, care-free.

The deeper reality is different. Some Parisians I met told of their grown children not wishing to return from studying abroad, or younger ones being terrified by primary school anti-terrorism training. Streets around some public parks and other heavy pedestrian areas were closed by police barricades on weekends. I avoided the Champs-Elysees, which was the subject of a failed vehicle attack during my trip, and I rushed through crowds outside Notre Dame – it felt like a vulnerable place. (It should go without saying that travel insurance is a non-negotiable for travelling anywhere alone.)

By and large, however, these considerations were peripheral to the overwhelming day-to-day reality of Paris: the magnificence of its art, food and architectural order; the presence of the past; the infectious insouciance of the Parisians.

Here are some ideas about how to enjoy this city, alone. By yourself, you have the ultimate freedom to observe, to repeatedly lose your way,  retrace your steps, make decisions and then retract them. You are able to pursue your own chaos, and in the labyrinth of Paris, this can be an advantage.

When travelling alone, services such as Airbnb show their worth, especially if you can find someone like my host Sylvie, who opens a spacious room in her top-floor Montparnasse flat to visitors for a relatively small cost (particularly for such a central location in Paris).

Sylvie was able to point me to the best local restaurants and the subway, advise on nearby attractions, and give me tips on my (terrible) French.

She even invited me to tag along on her regular night out with her friends from dance classes at Le Caveau de la Huchette – a legendary jazz club in the Latin Quarter, housed in a 16th-century basement “cave” (and said to be the inspiration for Liverpool’s Cavern Club, where the Beatles cut their teeth). The live jazz music, serious dancing and old-fashioned service make you feel as though you have been transported at least a few decades into the past.

Montparnasse is not as touristy as adjacent St-Germain-des-Pres, but still has plenty to recommend it.

My apartment was within easy distance of the Luxembourg Gardens, a great place for a singleton to watch the world go by.

Also a short walk away is the Montparnasse cemetery, where you can find the joint grave of Jean-Paul Sartre and Simone de Beauvoir (as well as other notables like the American writer Susan Sontag). The cafes of the area were well-known haunts of the philosophical duo.

Around Place Pablo Picasso, you can sit on the swanky streetside set up of the Oyster Bar, with the eponymous products resting on shaved ice; opposite it is La Rotonde – a classic Parisian bistro from its neon lights down to its Burgundy snails with garlic butter.

For a cheaper, but still quintessential, French meal, Sylvie suggested I wander a bit further down Boulevard Montparnasse and take a turn down Rue d’Odessa or Rue du Montparnasse, which host a cluster of creperies. A savoury galette – a buckwheat  “crepe” filled with ham, cheese and other fillings – plus a cup full of Breton cider will set you back just a handful of euro.

Airbnbs of this sort aren’t fancy, but they have charms of their own, apart from the engagement of your host which will go way beyond what you will find in most hotels.

You will get a taste of the day-to-day life of a Parisian and, if you’re alone, you’ll have someone to talk to and someone who will care about your whereabouts.

A glimpse of Parisian summer from the window of the Airbnb apartment.

Find a place – it doesn’t really matter where – to return at the end of the day to think about what you have seen and what you will do next.

Mine was Café Bullier, in Montparnasse, an archetypal Parisian café – curved bar, wooden furniture, the same menu as a thousand other Parisian cafes. But it also had the New York Times international edition (for the reading of which I was admonished by an elderly regular: “You have my paper”.)

Attentive table service, excellent happy-hour discounts, regulars who became familiar… the staff never rushed me, even if I sat on a drink for an hour. Insouciance, right there.

In my experience, Parisian restaurants are very relaxed with single diners, even at the higher end of the market.

Buvette, a small restaurant just south of the sleazy vibrancy of Pigalle, is a find: as if a couple of Australian hipsters knew how to cook traditional French food. Another tip for loners: sit at the bar if they have one. My servers – a Pakistani and an Indian – were up for a chat about cricket, but also described the menu in detail and recommended excellent wine. A chicken liver mousse studded with bacon and served on chewy artisan bread was followed by a traditional coq au vin, with a suitably winey gravy and tiny onions. Wonderful. And the best espresso I have found in Paris.

This 400-year-old old market in the Marais – the oldest covered market in Paris – is an appealing destination for the lonesome food lover. It starts on the street outside the market, with sellers offering plates of unshucked oysters (they will open them for you), traditional cheese, wine, charcuterie, condiments and more. Inside, you can buy fresh flowers, fruits and vegetables, and seafood, and find numerous restaurant stalls including Moroccan, Asian, traditional French, and Afro-Caribbean food. I chose the latter, Corossol, and started with the Martinique dish of Accras de Morue – delicate but full-flavoured puffs made from salted cod.  For mains, I chose a silky boudin noir sausage with salad and plantain fritters – not for the fainthearted eater.

Also in the market is an antique photo shop , where you can pick up vintage photograph collections of all kinds of French attractions, as well as those from other European cities. They make suitable gifts for those you have abandoned for your solo sojourn.

Museums and monuments are on the agenda of every Paris visitor. For the solo traveller, they offer a chance to become absorbed in areas of interest that might not be to the taste of travelling companions.

Here are a few of my favourites, beyond the Louvre and the usual must-see monuments.

The magnificent Palais Garnier – home of the Paris Opera and setting of the novel Phantom of the Opera – offers an excellent self-guided audio tour of the extravagant building’s architectural features and history. 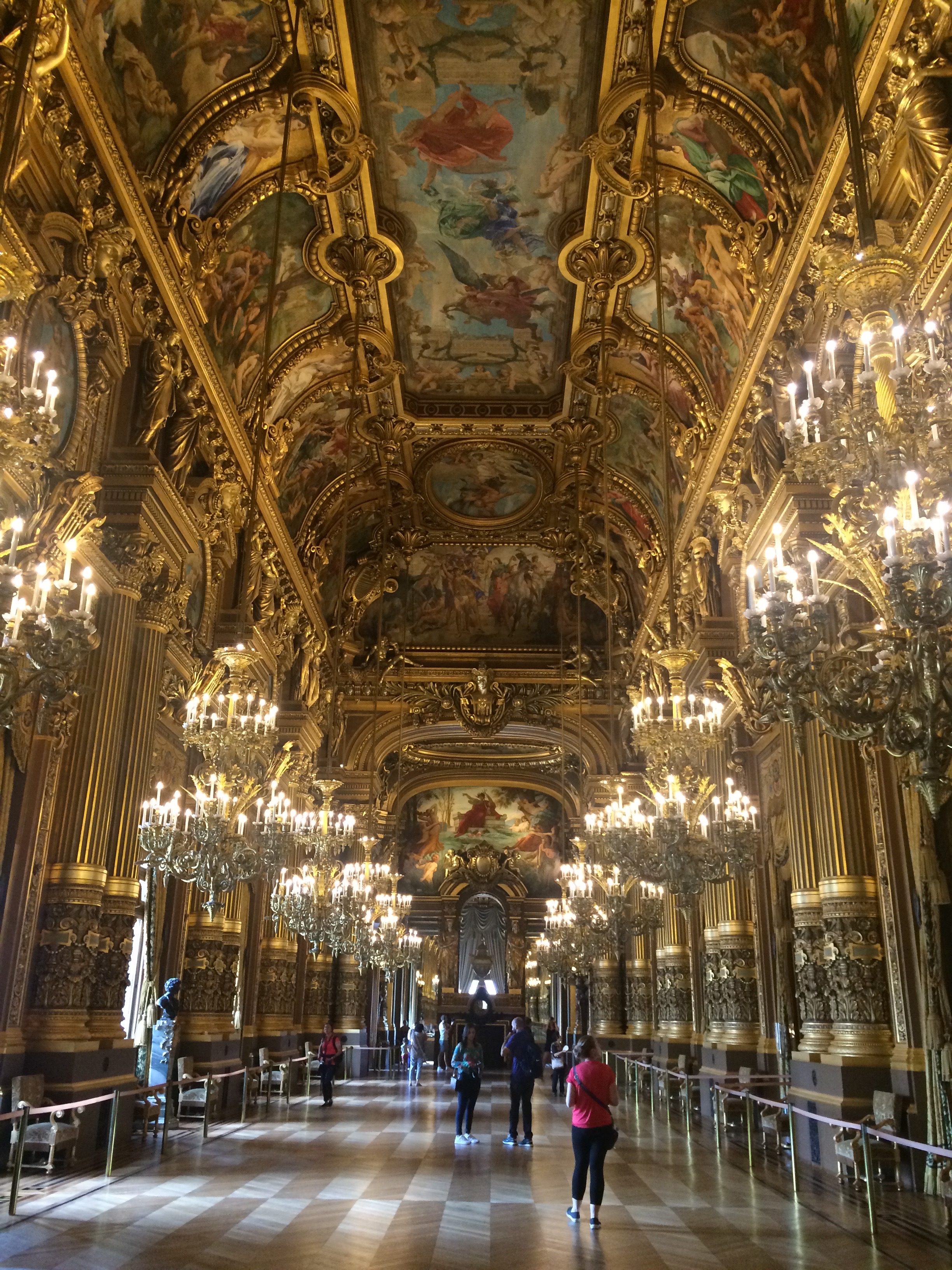 The grand foyer of the Palais Garnier – inspired by Versailles’ Hall of Mirrors. Author’s photograph

The Musee des Plans-Reliefs, contained alongside other military museums at the Hotel National des Invalides, is a small gem. It contains a series of detailed, meticulously accurate three-dimensional scale models of strategically important French towns and fortifications. The oldest dates back to 1668, during the reign of King Louis XIV, and the collections was later expanded by Napoleon. A portion of the remaining 100 detailed models – made of plaster, wood and papier-mache – are available to be viewed in the darkened salon of the museum. 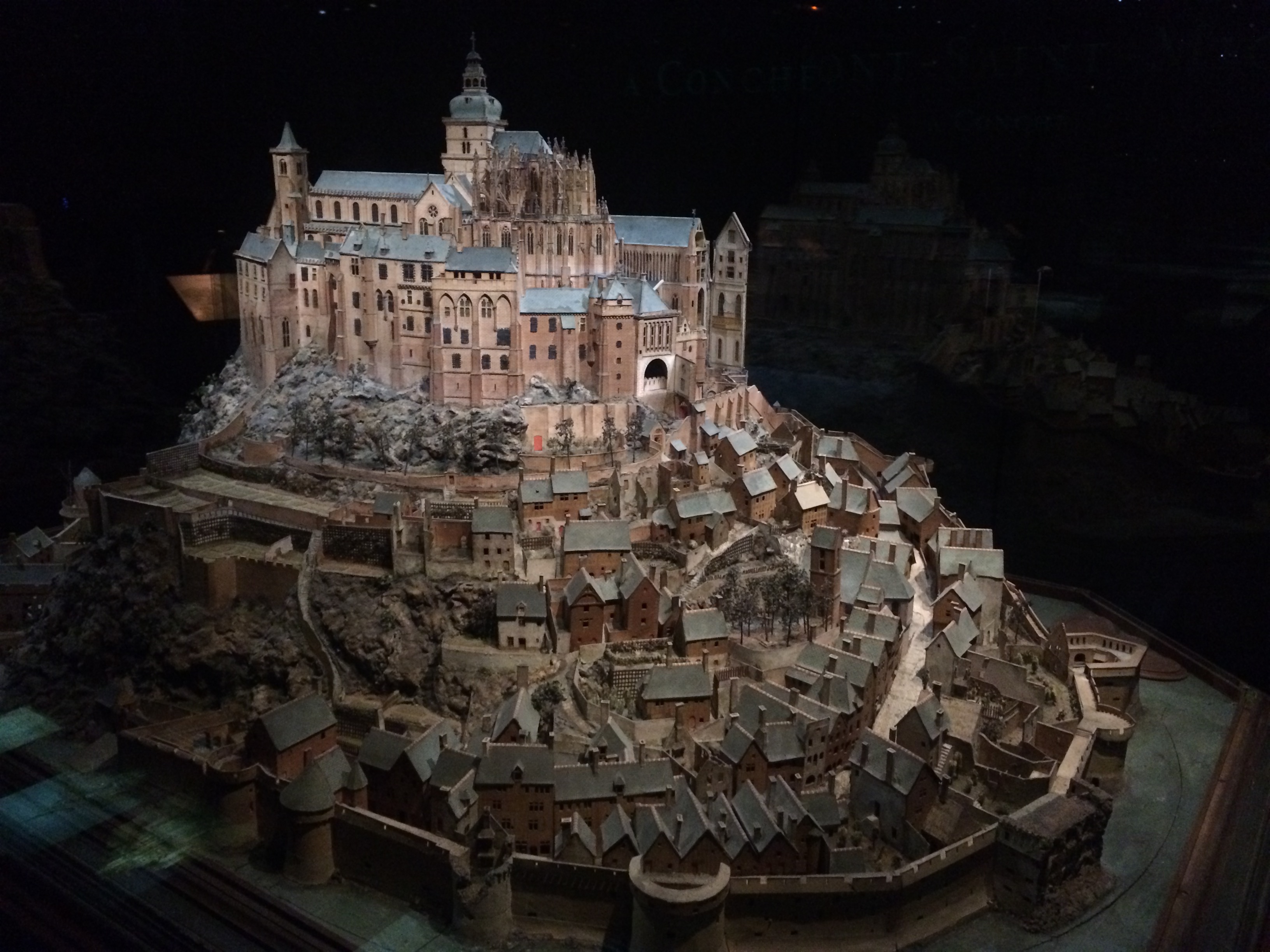 The model of Mont-St-Michel at the Musee des Plans-Reliefs. Author’s photograph

The Musée des Arts et Métiers, located in the 3rd arrondissement, is an absorbing museum of technological innovation.

Founded in 1794, it contains early flying machines, some of the world’s earliest motor vehicles, steam engines, scientific instruments including a working model of Foucault’s pendulum (which demonstrated the rotation of the Earth), and much more. A gallery is devoted to a wonderful collection of automatons – ingenious mechanical figures that move in surprisingly realistic fashion – including a famous example of Marie Antoinette playing the dulcimer.

Of the smaller monuments, I found Sainte-Chapelle to be perfect for solo reflection.

Built by Saint Louis in the 13th century to house sacred relics, the recently restored gem of Gothic architecture contains more than 1000 stained-glass panels across 15 windows which fill the space with light.

It stands only a short distance from Notre Dame, but it is by no means shaded by that more famous church. The upper chapel, to which you ascend by a narrow spiral staircase, is a glittering jewel-box, so washed with stunning colour that it seems miraculous.

It is one of those wondrous places that will make you wish you had your closest companion nearby.

For this solo traveller, the feeling was assuaged moderately by standing near the top of the staircase, and listening for the stunned out-breaths and sighs as people emerged from the dark below into the radiance.