I’d heard a lot of conflicting reports about the Great Barrier Reef before relocating from my native London to Australia for a few months. Some reports said there was no coral left; others said the reef was still healthy. I was desperate to see it for myself.

While the reef is undoubtedly under threat, I was pleasantly surprised to discover there are huge areas that justify its label as one of the world’s greatest natural wonders.

Coming face to face with sea turtles and diving with sharks are memories I will never forget.

My first glimpse into this underwater metropolis was at Flynn Reef with Silverswift dive tours out of Cairns.

The moment I put my head under the surface, I was surrounded by scores of dazzling fish and multi-coloured corals.

None of the pictures I’ve seen come close to how incredible it is in real life. Everywhere I looked there was a fantastic creature, from huge turquoise Maori wrasse to tiny, stripy sea slugs.

I always thought I would be terrified if I saw a reef shark almost two metres long on a dive, but I felt only awe when I spotted one gliding by, totally uninterested in me or my group.

On the second dive I came across a huge hawksbill grazing on the seabed, apparently unfazed by its lunchtime audience.

Documentaries and videos are nothing compared to seeing a turtle in the wild. It was so close I could reach out and stroke its shell as it drifted by.

By my third dive of the day, all the incredible things I’d seen were too long to list, including famous “Nemo” clown fish, stingrays and even a spawning sea cucumber.

One of the highlights was swimming through a canyon to discover a giant, blue and purple clam at the end.

Moments later we came across a cuttlefish that treated us to a colour-changing display as it swam around in search of a mate.

Another favourite moment was snorkelling off Green Island; the seagrass beds near the beach were teeming with turtles, which could even be spotted from the jetty. 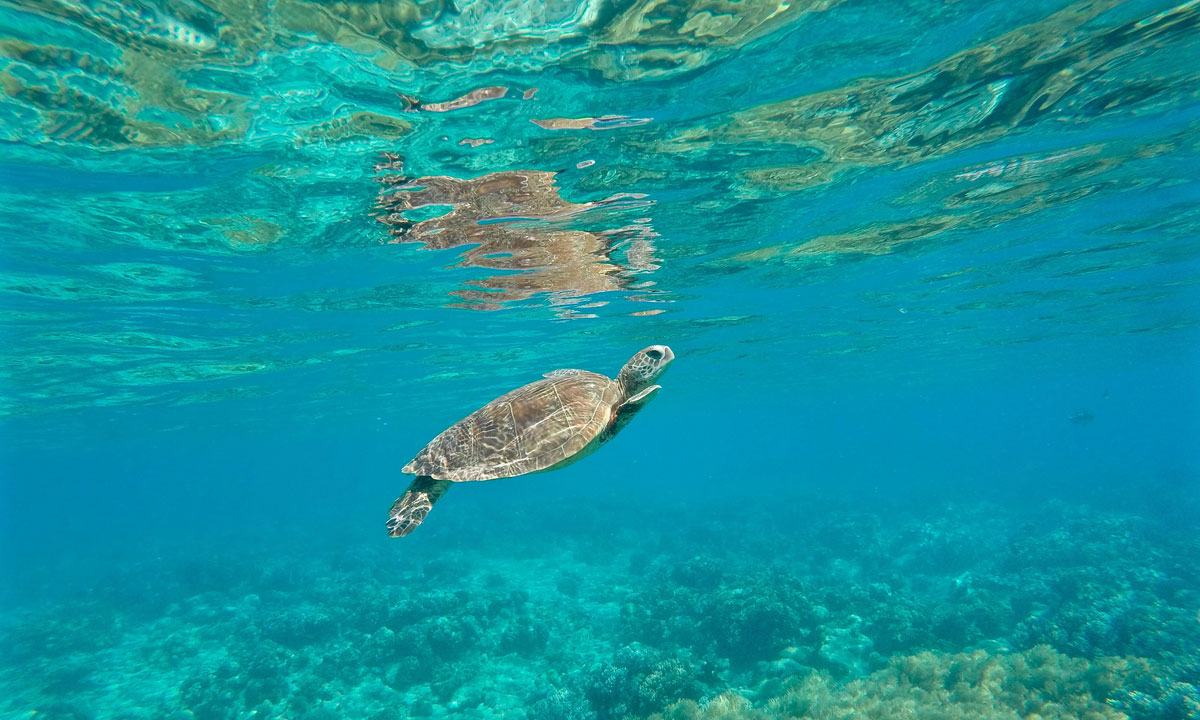 A turtle in the water off Green Island. Photo: Buongiorno World / flickr

The tropical islands dotted along the coast offer an incredible base from which to explore the reef, but I was perfectly happy in Cairns at the Novotel Oasis Resort, close to town and the waterfront.

My room had quiet views over the hotel’s pool and gardens, and was the perfect spot from which to watch Cairns’ flying foxes flitting through the sky at sundown.

Another day I grabbed a 45-minute ferry ride to Fitzroy Island and national park to enjoy its walking trails, rainforest and fringing coral reef.

The resort offers diving, snorkelling and even glass-bottomed boat tours if you don’t want to get your hair wet.

A short hike through the rainforest brings you to Nudey Beach, a strip of sand and coral with picture-perfect views over the Cairns hinterland.

The island is also home to the Cairns Turtle Rehabilitation Centre for sick and injured turtles, many of which are suffering after cyclone Yasi in February 2011 destroyed huge swathes of the seagrass beds where they feed.

The turtles are often suffering from starvation when they are brought in or have eaten plastic bags or other rubbish. Since 2000, the team has nursed more than 300 of them back to health, all of which have been released back into the ocean. 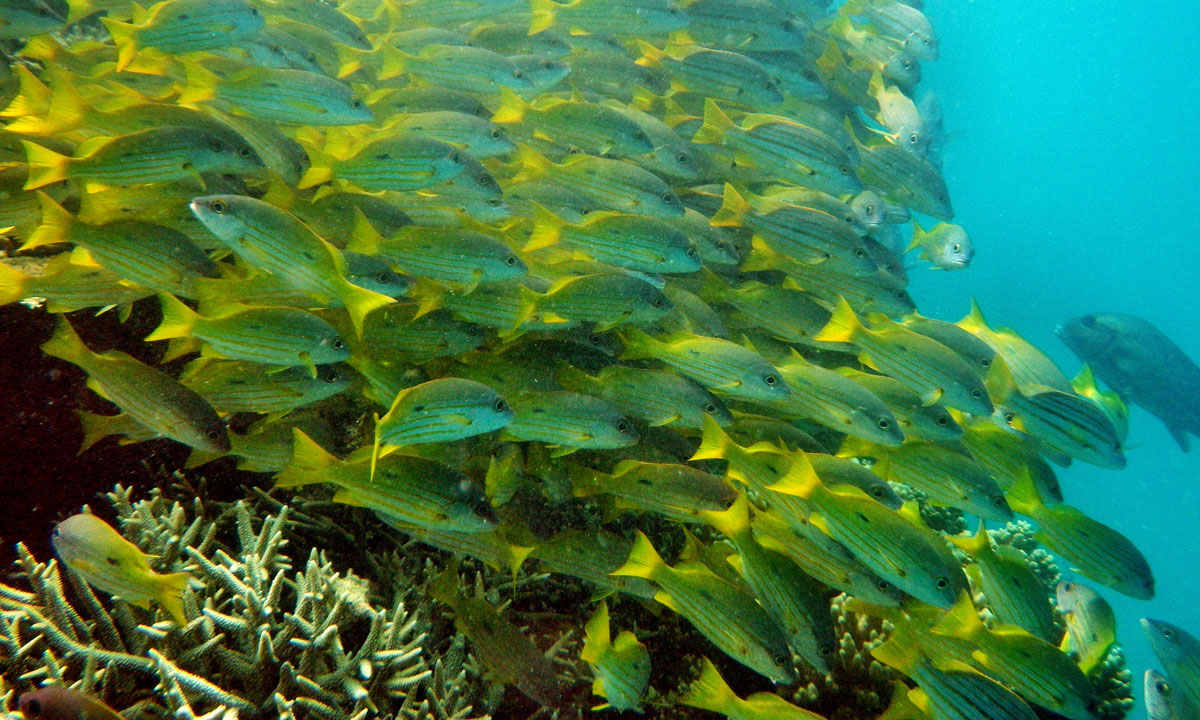 The delicate ecosystem of the reef is under threat. Photo: Paul Toogood / flickr

For a greater education on the reef, the incredible creatures that make it their home and ways to protect its delicate ecosystem, I headed to Reef Teach in Cairns.

I was also lucky enough to go out on a boat with workers in the crown-of-thorns eradication program.

This highly-venomous starfish is one of the biggest threats to the reef and has spiked in numbers due to water pollution and a decline in predators.

The Association of Marine Park Tourism Operators in north Queensland has been training disadvantaged young people to become divers and oversee a program to destroy the crown-of-thorns since 2010.

They inject the starfish with a formula of cattle bile, which kills them but is harmless to other marine life. So far, they have removed more than 500,000.

Such conservation projects are heartening and offer hope the reef will be there for future generations to enjoy.

But many who study the reef are pessimistic about its future.

“Basically we have to reduce global carbon emissions, otherwise it’s not looking good for reefs around the planet,” says Dr Suzanne Long, program director at the Reef and Rainforest Research Centre in Cairns.

Dr Long tells me the reef covers such a huge area that one part can be severely affected but another totally healthy. Tourists usually only see the healthy parts, of course – and it’s lucky those areas weren’t affected by the mass coral bleaching in 2016.

Last winter, aerial and underwater surveys revealed bleaching had killed 35 per cent of coral in central and northern parts of the reef. Much of the bleached coral has already died; the coral that hasn’t could take more than a decade to return to its former condition.

Many of the fish have also disappeared from damaged areas.

“We’re really lucky that it happened in the area that it did from a tourism perspective,” says Dr Long.

“The places where the tourists visit are great. If you were taken to the area where the bleaching happened, you would notice a huge difference.”

I came away from my trip enthralled by the beauty I had seen on healthier parts of the reef, but saddened by the irreversible damage on others. Having experienced this wonder with my own eyes, I see how vital it is to save it.

Snorkel cruises with Silverswift cost $222.50 per adult and include equipment and lunch. It’s an extra $57 for one certified scuba dive, including full gear. Visit silverseries.com.au. A daily tour of Fitzroy Island, including return ferry, is $78 per person (go to fitzroyisland.com). To find out more about the crown-of-thorns eradication program, click here.

*The writer travelled as a guest of Queensland Tourism.