The cuisine of Sicily is a reflection of the many different cultures who have been dominant there over the centuries and the street food of the island tells that history in every dish.

Now, a greedy girl like me is most unlikely to miss out on an opportunity to get her history lessons via food, so while in Palermo, The Bloke and I took part in one of the best local street food tours around, hosted by StrEat Palermo.

A good food tour helps visitors get to know the city they are visiting. Several hours spent wandering the back streets of Palermo, under the guidance of the knowledgeable Francesca, helped us orientate ourselves in the Italian city, discover some of the local secrets and enjoy the tasty, local street specialities while burning calories at the same time.

That’s totally a win/win in my book.

The tour started in one of Palermo’s markets – the Capo market, just behind the magnificent Theatro Massimo. One of the four markets in Palermo, the Capo sells a huge range of local foods, spices and seafood. 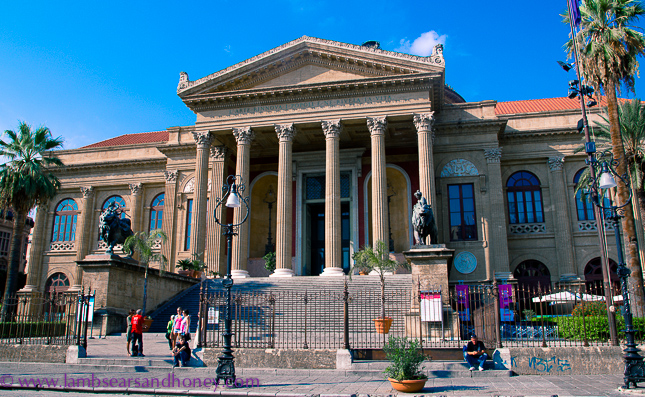 We made our way through the crowded market, stopping for the first of our local treats, panelle e cazzilli and arancine. Panelle are square, flat fritters made from chickpea flour. They are frequently served with cazzilli, fried potato fritters, in bread rolls. I neglected to take photos of these before they were all snapped up, but if I tell you that “cazzilli” translates to “little pricks”, I’m sure you’ll get an idea of how they look! 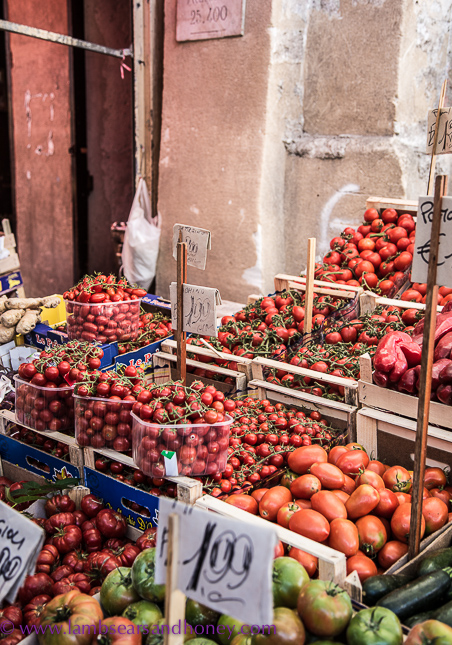 Arancine are a staple across Sicily and, like panelle, are Arabic in origin. Their fillings vary depending on what part of the island you eat them, but in Palermo the rice for these golden balls is cooked with saffron and they are stuffed with a meat filling. Quite frankly, I could have eaten the whole plate. 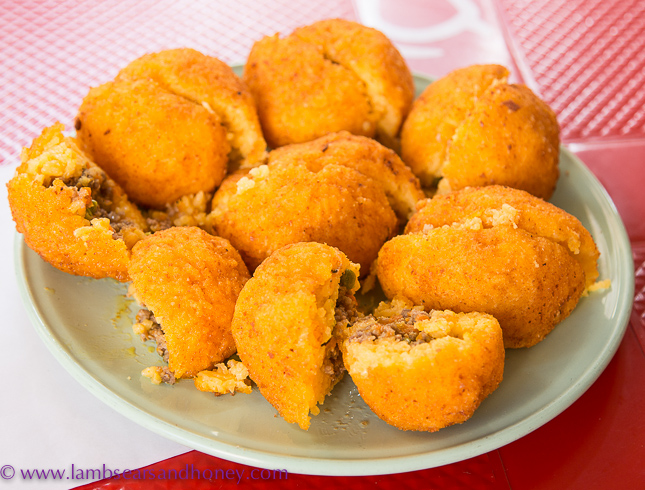 From here we headed through the twisting laneways to meet up with the sfincione man. A delicious snack, sfincione is very similar to pizza in looks.  Again, the toppings vary depending upon where in Sicily you are eating it, but the base is quite thick, light and very spongy.

One of the most distinctive of local street foods, and exclusive to Palermo, is the pane ca meusa – the spleen sandwich.  It is sold by street traders and consists of chopped cow’s lung and spleen which have been boiled for some time, before being fried in lard. It is served in a soft bun and comes either “married”, served with ricotta, or “single”, without the cheese.

I was brought up eating badly-cooked offal, so am not a fan. These sandwiches were tasty enough and The Bloke enjoyed his, but they were not quite tasty enough to make me change my mind about eating spleen.

Once everyone had their fill of cow organs, we moved off to find some liquid refreshment.

On the way to a local bar for a glass of marsala, a fortified wine produced in the town of Marsala in Sicily, we stopped so that those who wanted to could experience an interesting local drink. It consists of a large glass of orange drink to which a big spoon of effervescent powder is added. 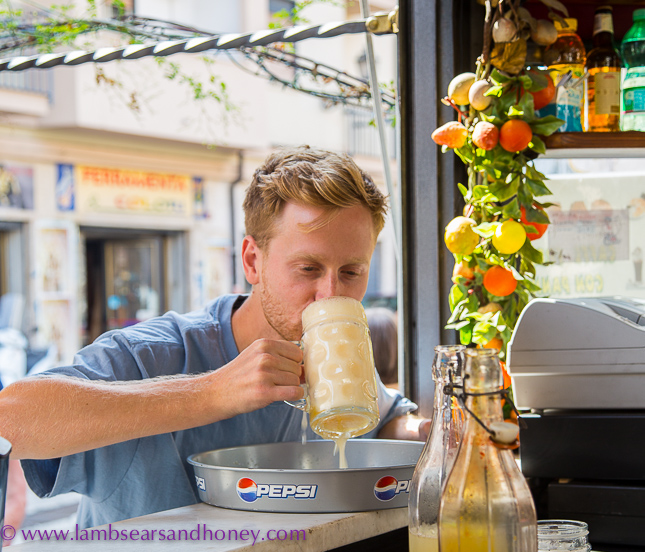 The aim is to drink the whole lot down while it is still frothing – for reasons that were never fully explained. After watching one or two of my fellow travellers have a go, I decided to pass.

The tour finished, as is only proper, with gelato. Of course, this frozen dessert treat is available all over Italy, but Sicily is one of the places it is thought to have originated. Unusually, it is served all over the island on fresh, soft brioche rolls, making it a much richer, more calorific snack – or a well-rounded meal. I guess it just depends upon your point of view.

While I was scoffing down some of the very best pistachio gelato I’ve ever had, I noticed this charming baker next door, filling cookies. With a smile like that, how could I resist taking a photo? 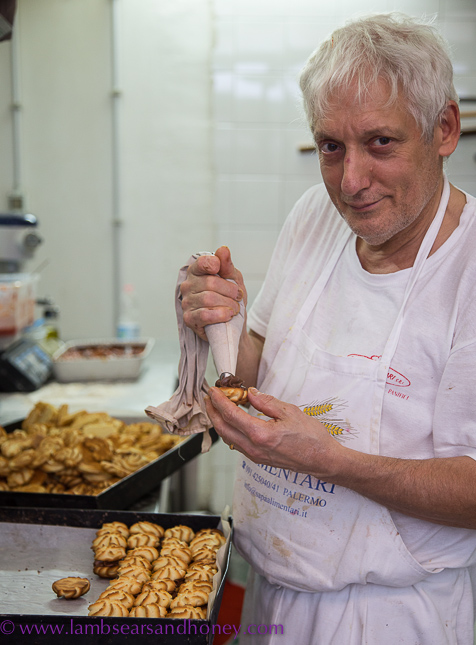 Palermo is the capital of the Italian island of Sicily, and is serviced by regular flights from most Italian cities. You can read more about the city and its attractions here. StrEat Palermo offers winter, summer and night food tours for €39 ($A56).