While the world remains entranced by Paris, the flow of books about it will not cease. There are so many, however, that you might sensibly ask what is to recommend a particular new one. As they say in marketing circles, what’s the point of difference? Australian John Baxter thinks he has just that.

Baxter is a long-term resident of Paris with numerous previous publications, including several about the much-romanticised City of Light. He has conducted walking tours, run the Paris Writers’ Workshop, and produced a stream of historical guidebooks and memoirs. His subject in Five Nights in Paris is a night-time walking tour intended to reveal a side of the city not captured by the usual tourist packages, or by guide books. 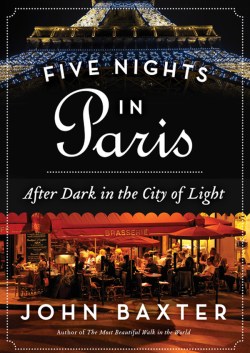 The introduction is intriguing, though it takes 60 or so pages before Baxter really brings the reader to modern streets for material that connects with his ambitions for a tour. That lead-up includes a short treatise on the history of public toilets and fascinating anecdotes about Woody Allen’s early misadventures in filming in Paris, among other things, so it is not time wasted.

The eventual framework for the proposed night tours is based on the senses, hence the book’s sections being Sound, Taste, Touch, Scent and Sight. It allows Baxter to dwell on historical and contemporary aspects of Paris, ranging from the pawning of the government guillotin to life as a café waiter, from artistic movements to brothels, from the upgrading of slums to the reason so many human bones are arranged in patterns underground.

Unsurprisingly, there are plenty of larger-than-life characters and strong bursts of authorial presence.

This is, in the end, a memoir, but one which marries history with autobiography, and which is for the most part carried off with a light touch. Baxter’s writing style is undemanding, like a conversation with a friend, but it offers insights that only a Parisian friend might be able to share. 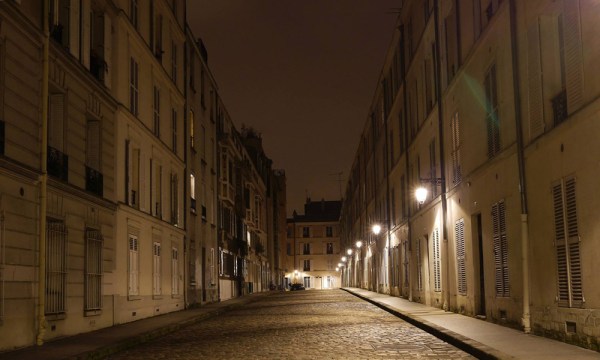 “The Passage of Hell….a corner of the strangest city in the world” – John Baxter/Facebook

Five Nights in Paris, by John Baxter, is published by HarperCollins, $24.99. Information about Baxter’s guided literary walks in Paris can be found on his website.