“There’s some crazy shit in there,” Rappo says in a gravelly monotone, gesturing to the shadowy, cavernous rooms in his charge.

Rappo, an engineer turned industrial artist, is the doorman at Steampunk HQ – a cross between a mad scientist’s playpen and a post-apocalyptic den of back-to-the-future technology in Oamaru, which Lonely Planet has dubbed “New Zealand’s coolest town”.

The 19th-century former grain store building that houses this bizarre museum dates back to the Otago town’s time as a busy South Island sea port. It was originally five storeys tall, but lost a couple of floors in a huge fire in 1920; subsequent wear and tear just makes it all the better suited to its current purpose.

“Steampunk”, for the uninitiated, is a genre or style that combines the romanticism of the Victorian era and 19th-century machinery with science-fiction technology. “The greatest era that never was,” is one of the pithiest descriptions.

The theme has been thoroughly embraced by Oamaru’s Victorian quarter, and nowhere more so than Steampunk HQ, where visitors are greeted first by a rusty train engine that puffs smoke at the push of a button and a hanging replica Zeppelin with painted shark jaws.

Then there’s Rappo, who has worked on some of the Steampunk HQ projects and is an enthusiastic promoter of the wackiness within created by industrial artists from donated machinery and other items.

“Wander around the first room and take a seat next to the weird character there – he won’t say much,” says Rappo (who does edit his speech when children are present).

“Then go into the next room and put this token in the box outside the Infinity Portal; you can go inside when the light turns green. It’ll blow your f***ing mind. You’ll want to come back and get another token; most people do.

“And make sure you go outside. There’s some real crazy f***ing shit out there!” 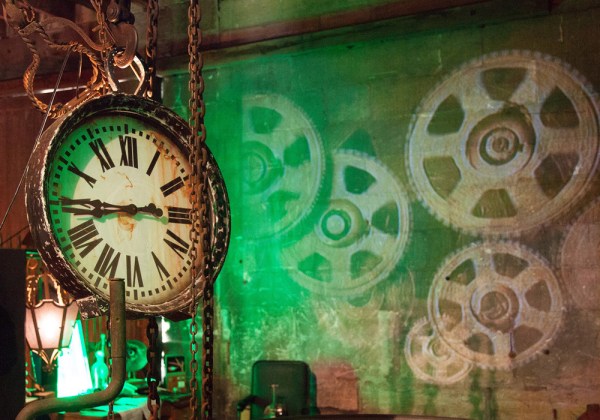 The rooms and “dungeon” in Steampunk HQ are dimly lit, with flickering coloured lamps and the coolness of the stone-walled, high-ceilinged space adding to its other-worldly feel. 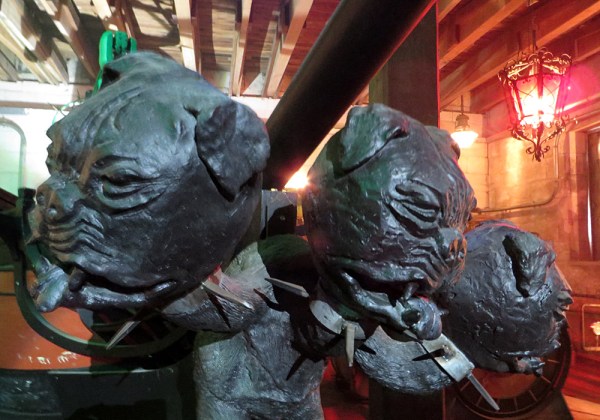 Rappo is right: everywhere you look there is something strange to see, with many of the exhibits accompanied by a sci-fi story that seeks to explain their origin or purpose. One example is the HMS Hunter, an imposing “ship” with a terrifying captain: Colonies Field Report: A curious ship unearthed in the quadrant of Ursa Major. Supposedly used to transport the dead to their new home in the Underworld, but actually a front for smuggling fine Colonial Tea and Biscuits. The fearsome chap at the helm hides the vessel’s true purpose.” 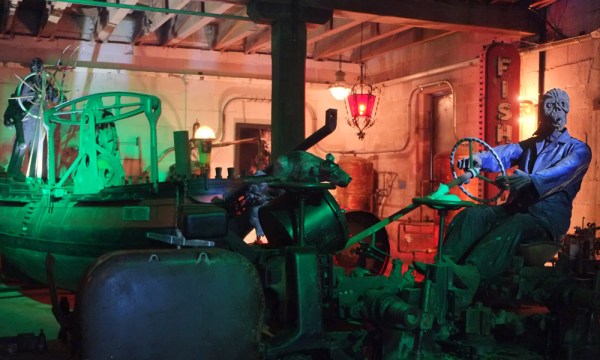 Outside, giant metal flies climb up the exterior walls of Steampunk HQ, with the yard housing large projects and machines, some of which are still in the process of being “Steampunked”. There’s a train carriage you can climb up, a giant “motorbike” with truck tyres, and the maddest tractor you’ve ever seen.

But back inside, the Infinity Portal is a highlight. The result of a collaboration with a New Zealand spatial architect, Angus Muir, it consists of a mirrored wall, floor and ceiling with hundreds of multi-coloured LED pixel lights suspended from above. Standing on a platform in the middle of these as light sequences create a magic ripple effect, you really do feel like you are suspended in infinity. 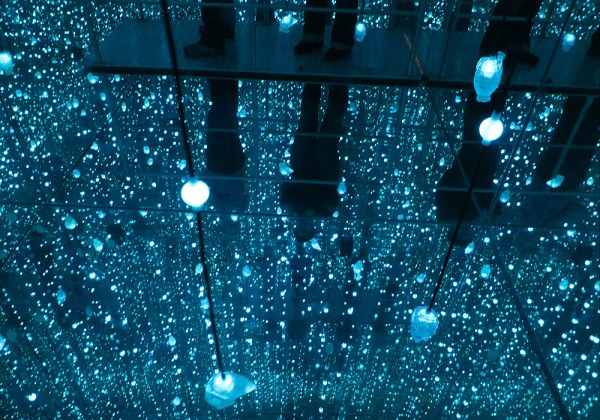 The precinct adjacent to Steampunk HQ, around Tyne and Harbour streets, is full of old buildings constructed from locally quarried limestone and is said to have some of New Zealand’s best-preserved Victorian architecture.

Many of the large buildings that were once used for industrial or agricultural purposes have been restored and repurposed – although it’s wonderful to see a wool store still operating in the midst of this retro revival. The precinct houses a Victorian costume shop; a second-hand bookshop with an excellent collection of vintage magazines, books and old postcards; a limestone sculptor; art galleries, a bakery and ice-creamery, and a community radio station with a display of historic radio equipment.

When you’ve worked up a thirst shopping and sightseeing, you can also enjoy beer tastings and tours at the nearby Scott’s craft brewery. Its beers are highly recommended and proudly local, with the website featuring a boast that probably owes much to the town’s early days servicing gold miners and pastoralists:

Paradoxically, the place was “dry” from 1906 until 1960 as a result of prohibition. The Criterion Hotel – now the only accommodation in the Victorian Precinct – operated as a “Temperance hotel” (meaning it didn’t serve alcohol) for many years.

Built in 1877 and described in the local paper at the time as the prettiest building in town, the Criterion has had a varied history, later being used as a warehouse, confectionary and soft drink shop, before falling into disrepair. Now, happily, it’s been extensively renovated and refurbished and is once again being used as a hotel, with a cosy front bar (serving alcohol), a restaurant and accommodation.

Rappo tells us he, too, has his own place in the historic part of town – a warehouse space with more “crazy shit”, including an extensive collection of old dentists’ chairs. It’s hard to imagine a more fitting advocate for Steampunk.

“My next project is to turn an old front-end loader into a rocket launcher.” 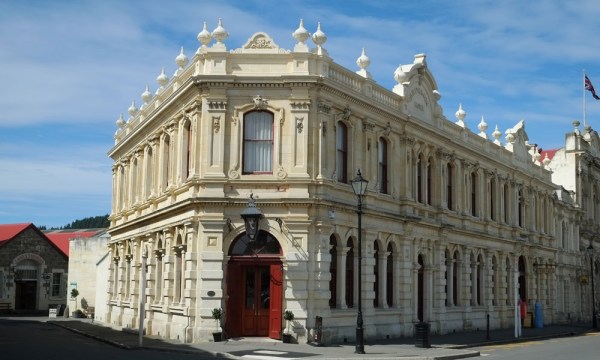 Getting there: Oamaru is in Otago, on the east coast of the South Island. It is 112km north of Dunedin and 249km south of Christchurch, making it a good stopping point if you’re travelling between the two cities. It is also just over four hours’ drive from the popular holiday spot of Queenstown.

Where to stay: Criterion Hotel, Tyne Street. This is old-style hotel accommodation, meaning the rooms are small and only one comes with an en suite. However, they’re clean, reasonably priced, ideally located in the historic quarter, and come with a slice of history. Plus there’s a bar just downstairs.

Other activities: Blue penguins nest under the cliffs along the harbour foreshore in Oamaru, not far from the Victorian precinct, and there are a range of day and evening tours available at the Blue Penguin Colony. Take a drive just 30 minutes up the coast and you can also visit the spectacular Moeraki Boulders, a group of large round boulders on the beach originally formed from ancient sea-floor sediments and exposed by erosion.

Where to eat: Cucina 1871, 1 Tees Street. Situated within the Victorian quarter in an ornate heritage building, this restaurant serves seriously delicious Italian-style pizzas. It also has a good range of antipasti, pasta dishes and other mains, as well as a decent wine list featuring Otago pinot noir.