The eastern suburbs’ Maylands Hotel has revealed a vibrant new look that blends modern, vintage and art deco aesthetics, all inspired by what the hotel says is a COVID-induced trend of customers seeking more intimate and unique spaces.

Built in 1883, the historic neighbourhood pub is operated by the family-owned Matthews Hospitality Group.

The Matthews group enlisted home and garden designer Deb Barnes to design a warm and inviting renovation that would feel more like an intimate lounge room than a pub.

With experience primarily in residential homes and never having worked on a hotel before, Barnes was approached after working for the Matthews’ group director, Lisa Matthews.

“Primarily I’m a garden designer, that’s what I have done for over 20 years,” says Barnes.

“I did Lisa’s garden, front to back, and then she asked me to design the interior of her house. She liked my style and asked if I’d be interested in doing some work at the Maylands.

“The hotel was tired and needed a facelift; nothing structural, purely cosmetic to smarten it up.”

The hotel management was particularly interested in a designer who didn’t have a commercial background, with the aim to produce something different to a conventional hotel renovation.

“Many modern pubs have a similar look these days, so for the Maylands I wanted to bring in a vintage feel,” says Barnes.

“Retro and vintage trends never go out of fashion.” 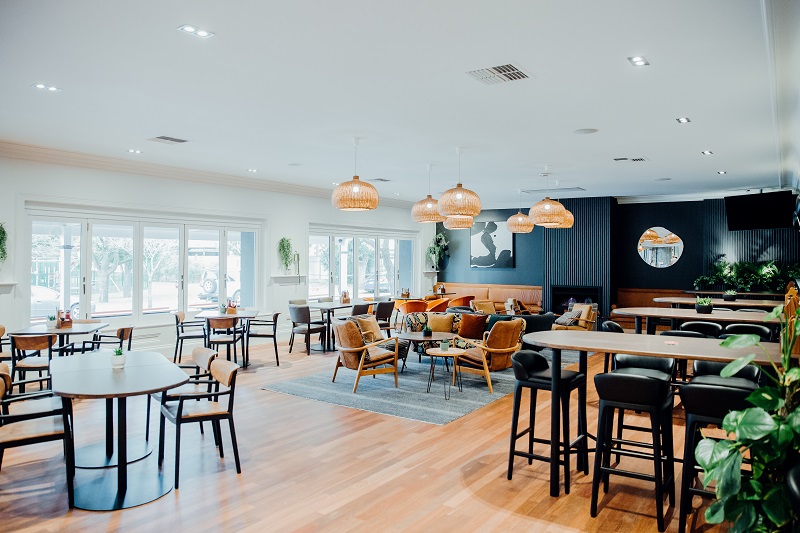 The Maylands was “dark and dated”, a hangover from a previous owner who had set it up with a focus on gaming.

For Barnes, the brief was to transform the hotel’s spaces to be warm and homely, while maintaining its historic character.

“The manager was wanting to bring younger people into the pub and that’s definitely happening now.

“Locals now feel like they’re in their own lounge room, which is what I was going for, and also aligns with how I like to design homes.”

One of the biggest and most popular changes has been the transformation of the lounge dining room, which now enjoys views to the park and playground across the road.

This room was once a space for gaming and it still carried the dark, tinted windows and timber frames from that era.

“A previous owner had wanted it more like Las Vegas — there were gold tiles in the foyer that we ripped out and changed,” says Barnes.

The old carpet was ripped up and the existing jarrah floors were refurbished.

The dark timber windows were replaced with aluminium bi-folds that can be opened to enjoy the northern aspect.

“It was a matter of updating it all and giving it a bit of personality and character,” says Barnes.

This room has a capacity for 110 people and flows to the art-deco style bar, appointed with fluted panelling, white and blue colour scheme, orb pendant lights and a retro bulkhead ceiling. 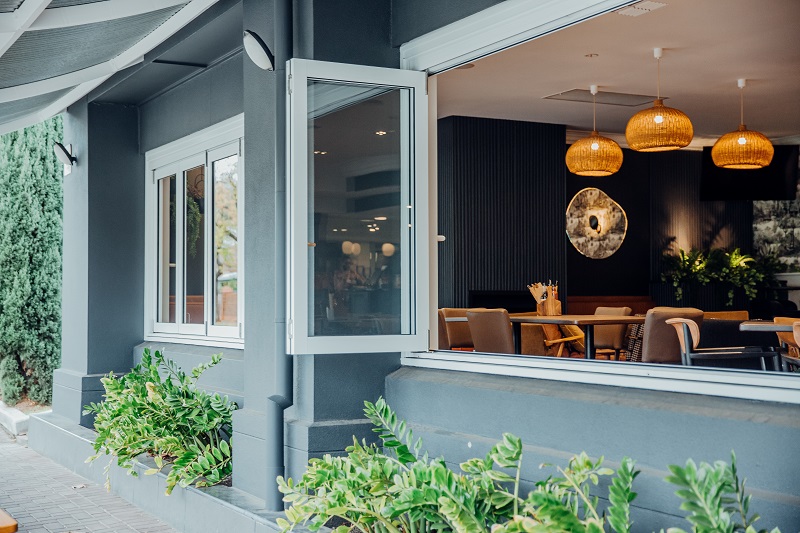 “The past 12 to 18 months have reinforced how important a suburban hotel is to our population in Australia, where people gather and connect, and it provides that social interaction and escape,” says Kemp.

“That connection has always been a part of hotel life, but it’s only become stronger.

“That period has enhanced our view that this hotel is really about the community, and there is a really strong connection between the hotel and the locals.

“It cemented the idea that it needed a makeover to become more warm and friendly. It’s been supported really well.”

Kemp says customers are seeking a more diverse offering in food and beverage, and that trend is consistent across the Matthews group of nine venues.

At the Maylands, the kitchen is led by chef Cristian Carbone and the front of house is overseen by venue manager Ali Davis.

“These days, the food offering most definitely has to be of a higher quality and with a greater diversity for a hotel menu,” says Kemp.

“People are trying new beers and new menu choices that they wouldn’t necessarily have tried 18 months ago.

“They’re being a little bit more adventurous and looking for experiences that are enhanced in their local area.

“You still want to be able to do your pub classics really well, but at the same time, people are looking for something new that catches their attention.”

More often than not, that means providing diners with something new to love from a South Australian producer.

“Our theme at the moment is around home-grown heroes,” Kemp says.

“That’s taking the best of what we have in our own backyard and bringing it back into the hotel, onto the menu, onto the taps or the wine list.

“People are connecting with that really well and that’s not just the Maylands, but a tendency across the state.”