It’s the type of wintry Adelaide Hills morning when the icy wind cuts straight through you, but that doesn’t deter a constant stream of people coming and going from the bucolic old schoolhouse on the main street of Nairne.

Visitors enter through a porch typical of a country-town church as natural light filters in through tall windows into the large hall.

Walls are appointed with school blackboards from many decades ago, and the high ceilings are reminiscent of the structure’s former life as a place of worship.

It isn’t long before the voluminous hall echoes with the bumping of rustic wooden tables and chairs, full of customers sipping coffee from artisan mugs and snacking on decadent pastries such as walnut cake croissants.

With the exception of this week, this has been a regular scene since November last year, when the previously vacant building was given new life as Rise Artisan Bakery.

The business currently trades from 8am each Thursday, Friday and Saturday, and will remain open for takeaway during lockdown.

There are retail offerings of antique clothes, knick-knacks, jams and preserves, goodie-bags of apples and cut flowers.

Rise Artisan Bakery is owned by Hills locals Katharine and James Katsarelias, who also operate Uraidla Bakery, which supplies most of the baked goods here.

The couple is supported by a husband-and-wife team in chef Jeff Trotter and patisserie cook Nikkita Wood. 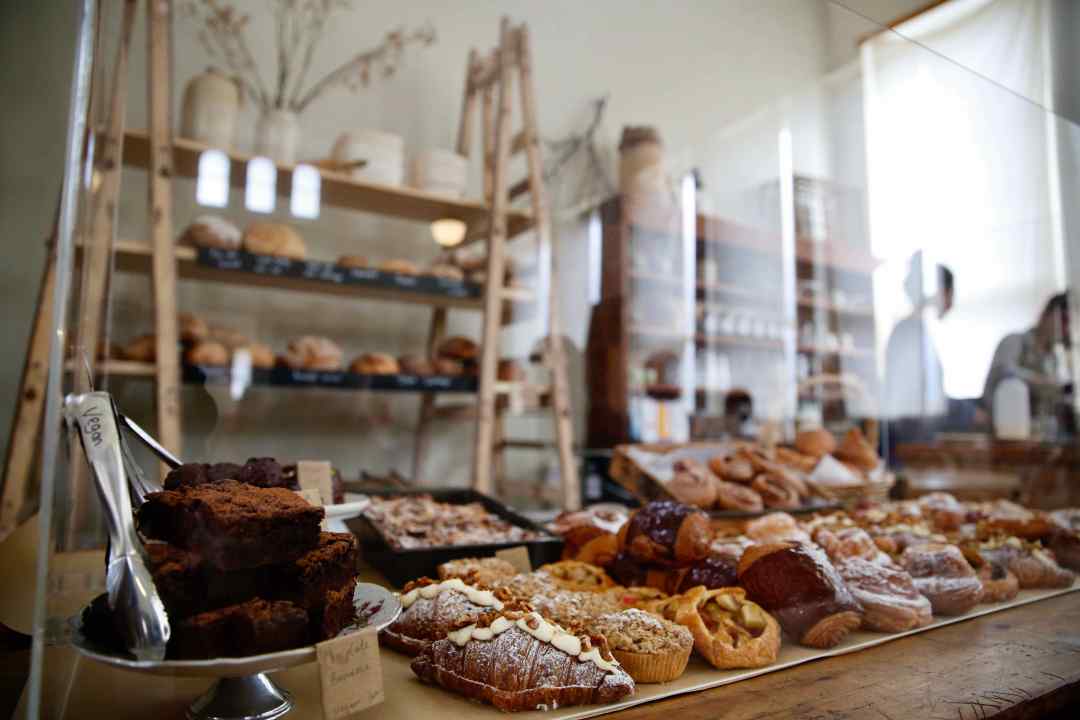 Wood helped to open Rise last year and has since joined as a business partner, while Trotter – who previously worked in Michelin-starred fine diners in England and Ireland – provides a helping hand when he is not working as the chef at Lobethal Road Wines at Mount Torrens.

Although the majority of the baking is done by the Uraidla bakery, Wood uses the small on-site kitchen to produce a range of additional goodies such as cakes, gluten-free brownies, salads and sandwiches.

“It’s a beautiful building, it’s not quite as elaborate as a church but it was once used as a one,” says Wood.

“The original blackboards from the school are still here, so we get some people coming in who can remember having gone to school here many years ago.”

The couple first met in Adelaide 10 years ago, but after just a few months Trotter moved to Victoria to work in the Grampians while Wood was still completing her patisserie studies at TAFE.

Upon completion of her course, Wood moved to join Trotter and worked with him at the renowned Grampians restaurant The Royal Mail.

They then moved to Melbourne for three years, but a return to South Australia – and particularly the Adelaide Hills, where Trotter completed his apprenticeship at Mount Lofty House – proved a more attractive lifestyle option. 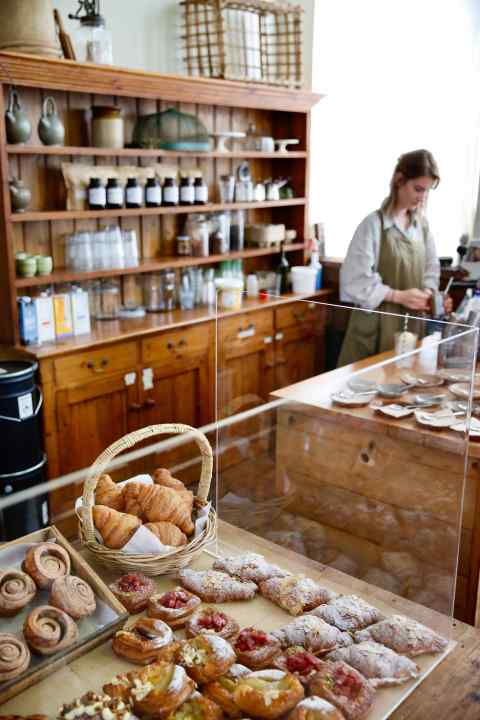 A cup of coffee made with Mitolo beans pairs perfectly with a croissant at Rise Artisan Bakery. Photo: Ben Kelly.

Wood and Trotter purchased a home in Nairne in 2019 and together have found their groove working at small-scale Hills businesses that offer boutique experiences, the kind of establishments that appeal to city folk exploring the region.

“One of the reasons why we moved back to Adelaide from Victoria was that we could actually afford a house. Nairne is a beautiful little town, still accessible to the freeway and only half an hour from the city,” says Wood.

“It’s a good work-life balance, even though we are working like crazy, just having the space and countryside around you makes you feel more relaxed.

“When you walk down the street it still feels like a small community, even with all the expansion that’s going on over at Mount Barker.” 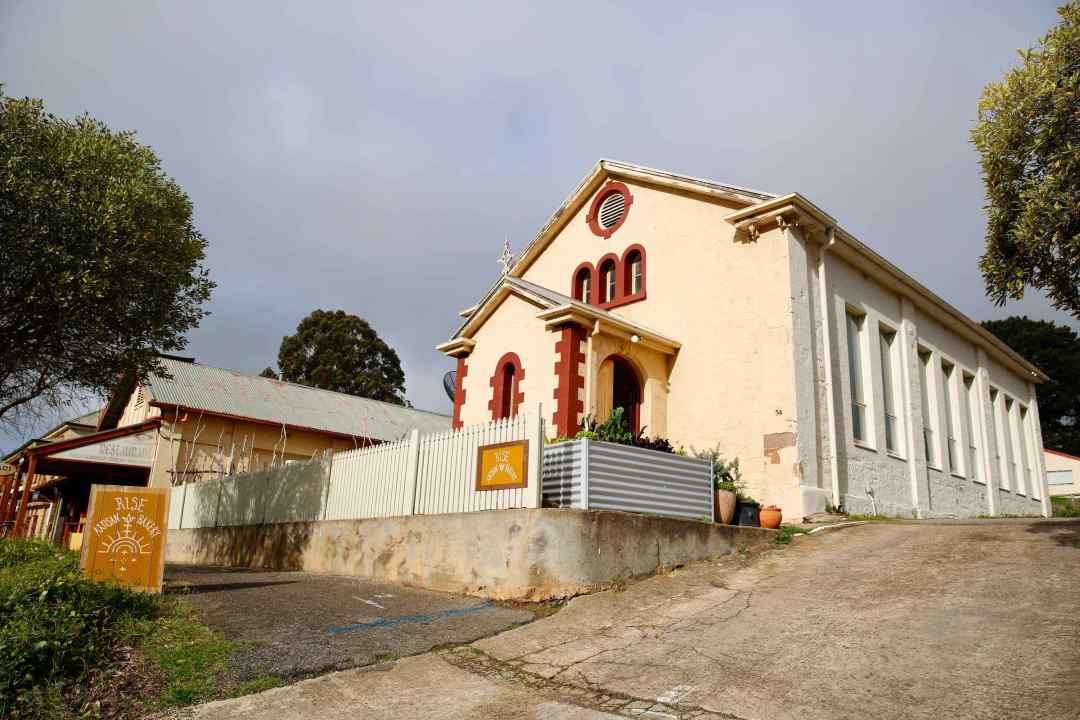 The former schoolhouse and church on the main street of Nairne. Photo: Ben Kelly.

For Trotter, Lobethal Road Wines has been a perfect fit for his style of cooking.

He has adopted a more relaxed style of cuisine while leaning on his background in classical French cuisine.

“Lobethal Road Wines’ Inga (Lidums) and Dave (Neyle) are beautiful people and they care very much about what they’re doing,” says Trotter.

“They’ve got a spectacular little spot there and as soon as we met them we just felt really comfortable and we knew it was going to work. It’s a positive work environment between us.

“They’ve embraced our style of food and the way we want to encourage sharing on the table.

“The philosophy is food that we’d want to put on the table if we had friends over for lunch, this is what we’d serve them. So, it’s an extension of our house – serving food in that cosy environment.”

At Lobethal Road Wines, Trotter has introduced share plates to the menu and has also brought small plate options to Thursday and Monday, in addition to lunch on Saturday and Sunday.

Lobethal Road Wines’ cellar door will remain closed throughout the lockdown, and is looking to reopen on Thursday, July 29. 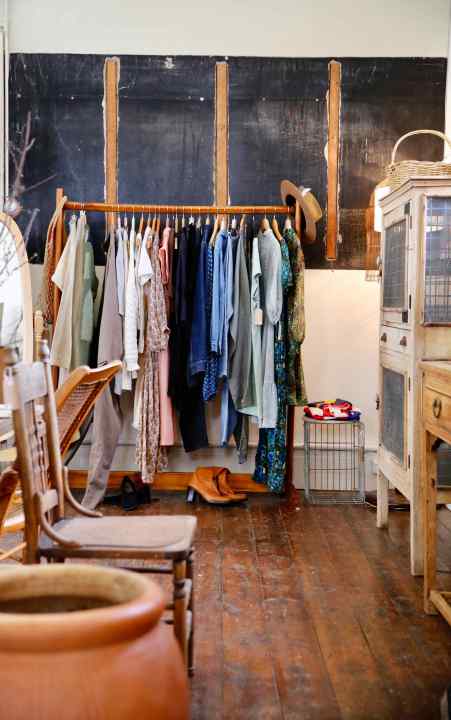 The venue has a 24-seat dining room and plans to extend the cellar door.

Trotter is the only chef in the kitchen, assisted by his wife, but if things get busier in summer they may need to enlist an extra set of hands.

“I’m looking forward to summertime when the outside area can be open with a beautiful courtyard, sitting there between the trees, and it will be spectacular,” says Trotter.

“At the moment, sitting inside around that fireplace, it almost feels like you’re sitting in someone’s house for a nice family gathering.”

Although Wood concedes Nairne likely doesn’t have the population required to expand Rise Artisan Bakery to operate seven days a week, opening hours are slated increase in the post-lockdown future.

“We’ve got such a great local customer base, plus people will come for a trip from Adelaide on the weekends,” says Wood.

“There are a few cute antique shops on the main street and although it’s not as big as Strathalbyn as far as antiques go, those little bits and pieces make the town more of a drawcard.

“You walk down the street and it still has a community feel; that’s what we fell in love with.” 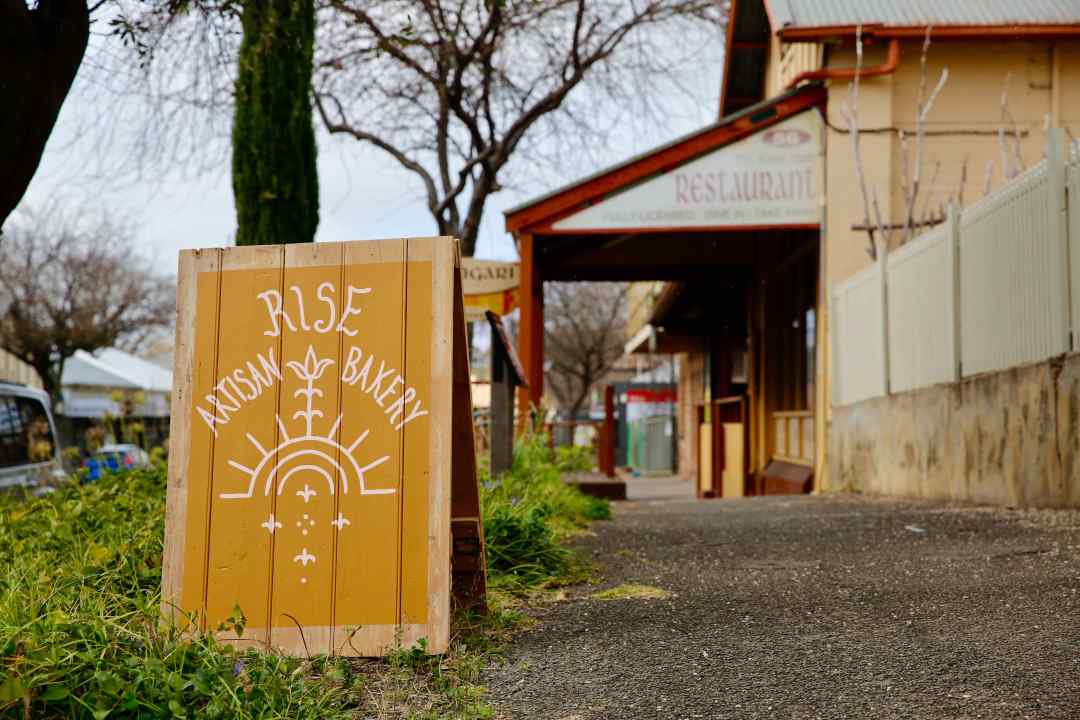 Rise Artisan Bakery is a recent and welcome addition to the main street of Nairne. Photo: Ben Kelly.

Rise Artisan Bakery will remain open for takeaway during lockdown. The food, beverage and retail offering may differ during this period.

Lobethal Road Wines has closed for the seven-day lockdown and is aiming to reopen on Thursday, July 29, pending the outcome of the South Australian coronavirus outbreak.