Vegetarian food was still considered “a bit out there” in 2008 when chef Tanya Agius and her partner Danielle Frankish quit their day jobs and founded plant-based eatery Let Them Eat, starting with a wholesale business and a market stall.

Fast forward to 2021 and Let Them Eat has grown to operate bricks-and-mortar eateries at Marion, Burnside, and Norwood, with the recent addition of James Place in September last year.

The latter was opened soon after Let Them Eat was forced to move on from their tenancy within the Central Market Arcade after seven years.

Now, Agius and Frankish have announced a return to the markets, having secured a double-sized stall within the market proper.

It will be the fifth outlet for the South Australian business, which employs more than 35 staff and prepares all of its produce at a production factory at Mile End.

Agius says the business’ growth is a reflection of the rapid rise of vegetarianism and ethically conscious consumers.

“In terms of growth, it’s just exploded in the past two years particularly,” says Agius.

“The fact that all businesses were threatened by COVID encouraged us to dig our heels in and start working a whole lot harder, and it’s paying off.

“The support of people in Adelaide buying local has made a massive difference for us, too.” 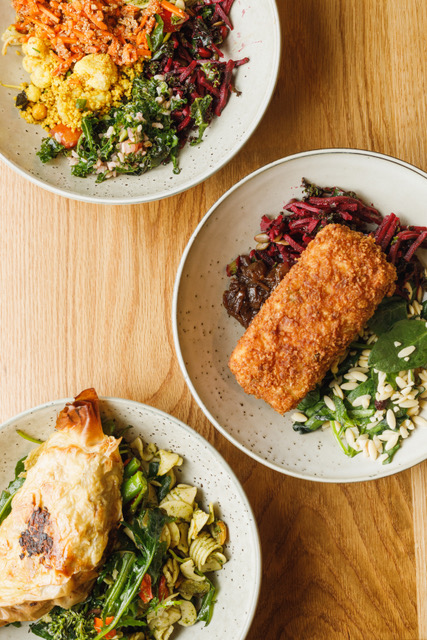 With a focus on whole foods, each location boasts a consistent offering of fresh salads, lasagnes, quiches, fritters, tarts, baked goods and sweets.

There is also an extensive offering of gluten-free and vegan items, served with 100 per cent compostable packaging and a focus on good nutrition.

“The products that have been going from the very beginning – such as our broccoli and haloumi fitters – are still our best sellers,” says Agius.

“We’ve got about 40 products in total, which makes us quite different because generally most places don’t have such a massive range.”

While the James Place location is slowly increasing its consumer base, the Central Market location is likely to be an instant hit.

“We were quite popular when we were at the Central Market, it was our busiest store, so as soon as we moved out we knew we wanted to go back,” says Agius.

“A position came up and we jumped on it.

“It’ll be a cosy and stylish shop where people can sit to eat or have coffee.”

Agius says the offerings are suited to a market-style environment.

“Our food definitely has that feel about it and I think it belongs at the Central Market.”

She says the market location will provide an expanded offering of a normal Let Them Eat store with the addition of a vegan delicatessen.

“It’s plant-based meat, so we’ll do vegan versions of salami, ham or any kind of delicatessen meat that you might find,” she says.

“They’re surprisingly flavoursome. That’s going to be something a little bit different that we will bring to the central market.”

While the original business model was targeted at women, Agius has noticed an increase in male customers in recent times.

The new store will be designed by Rebekah and Timothy Chichero of One Small Room Design who also designed the business’ other fit-outs.

A timeline for opening is yet to be announced.

“When you consider the year we’ve had with COVID, it is quite remarkable that we’ve managed to pull it off with everything that’s going on.”