It’s a cold, wintry morning on The Parade, but somehow it seems even colder inside the heritage building at number 127.

Paint is peeling from the walls, the bar and restaurant are gutted and a scattering of leaves has blown in from the footpath.

The venue has been vacant for a year since the demise of its previous occupant, Stone’s Throw.

Chef Jake Kellie and his business partner Martin Palmer (Fishbank, 2KW and Paloma) have since purchased the building freehold, ready to transform the space into an open-flame restaurant called arkhé (pronounced ar-kay).

When he looks around at the cold and empty space, devoid of any furniture or equipment (all of it having been sold by liquidators), Kellie gets excited describing his vision for the new restaurant, set to open in October.

“I like that name because it references what the restaurant will be all about: open-flame cooking.

“I remember when I first walked into the kitchen here, I started visualising what it could be and within 15-20 minutes I had a pretty good idea.

“We will have a big pass and a large open kitchen, with 19 seats around the counter. We’ve got a big bandsaw going into the kitchen so we can cut whole cuts of meat.”

There will be no gas or electric cooking, with the kitchen fuelled by a three-tonne wood-fire oven.

All of the kitchen bench tops will be appointed with timber, not steel.

“They looked at me funny when I said my idea was to have no stainless steel, but that’s something I pushed – timber is more comforting than metal, and for the chefs I want it to feel like home. It’s going to be visually stunning.”

The fitout has been designed by Studio -Gram and construction is expected to be completed by the end of October. 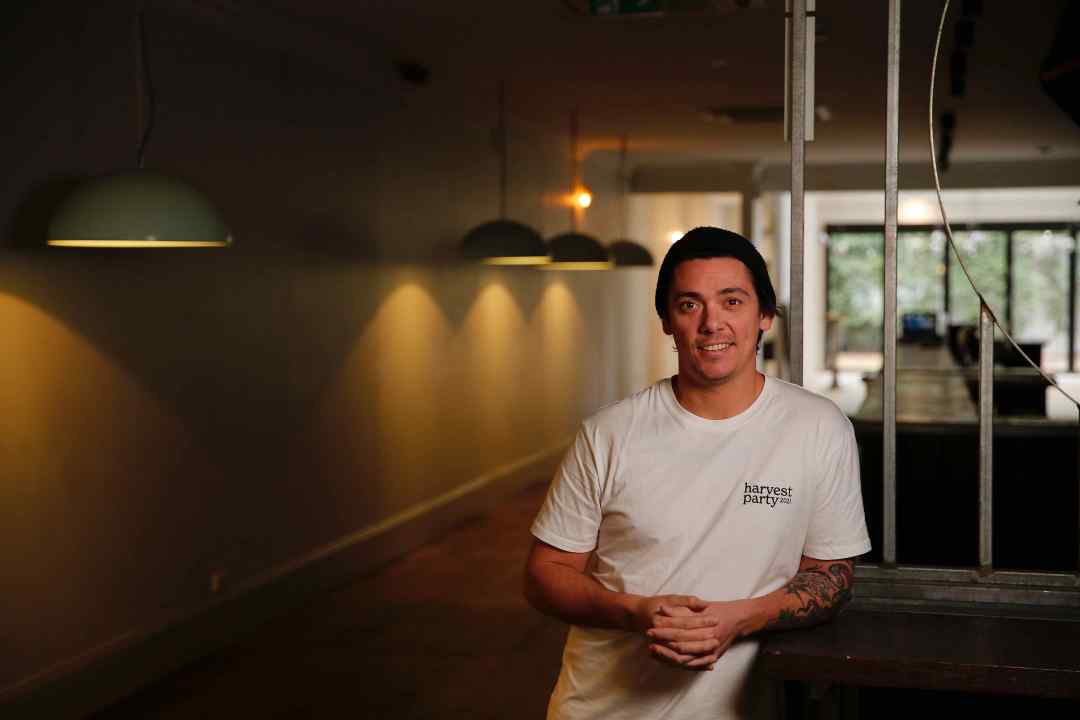 Kellie says he now considers himself South Australian, having planted his feet firmly since moving to Adelaide in 2019.

Raised in the Central Coast of New South Wales, Kellie has worked with some of the world’s top cooks, including Heston Blumenthal, Matt Moran and Brett Graham.

It was while working as head chef at Singapore’s Burnt Ends that he developed a passion and skill for cooking with fire.

During that time he helped the restaurant rise to number five on the San Pellegrino Asia’s 50 Best Restaurants List.

Relocating back to Sydney at the end of 2019, Kellie helped to open Coogee Pavilion’s Mimi’s Restaurant, which has since closed following COVID restrictions.

Then, with plans to move to New York scrapped because of the pandemic, Kellie was drawn to Adelaide to work at Leigh Street Wine Room, before shifting to Pirate Life where he operated a fire-grill food truck over summer.

It was at Pirate Life that he met Palmer, of Palmer Hospitality, and the two began to talk about the former Stone’s Throw site on The Parade.

“I was very keen to join the group and to have a good, supportive network behind me.”

Arkhé will promise diners the opportunity to experience the theatre and skill of chefs cooking with fire.

Unlike a typical kitchen, flames must be constantly tended to.

“You’re always learning with fire; the heat is never constant, it’s changing all the time, and it’s about managing it. It’s definitely an art,” he says.

“People ask me: ‘Would you use a pan again?’ and I say, ‘No, I would find it very hard.’ I really enjoy cooking with fire.”

The chef is tight-lipped about the design of the restaurant but says it will break up the large venue into smaller, manageable spaces.

“The timber elements will age with the building so that the venue is going to look even better in years to come; that was something Studio -Gram brought to the table.”

The bar will have a focus on classic cocktails, such as Negronis, Manhattans and Martinis, while the menu is slated to be much more than meat.

“Menu-wise, I don’t want people to think we’re going to be this heavy-metal steakhouse,” he says.

“We’re going to have amazing seafood and beautiful vegetable dishes grilled over fire.

“Nearly every dish will have some sort of smoke or a lick of fire over it. It might be subtle, but you will know that it’s there.”

Having travelled extensively during his career, the 30-year-old says arkhé symbolises the degree to which he is putting down roots in Adelaide.

He and partner Ena Vujcic are also expecting their first child later this year.