Lot 8 – the location and the restaurant name – sits at the front of the Aldinga Arts EcoVillage on Port Road, Aldinga, but it’s not a place you’d stumble upon if you weren’t looking for it.

There’s no obvious signage, except a red and white glass mosaic 8 at the front, and the unassuming building looks more conventional modern home than traditional Asian eatery.

Owner Francis Tan laughs when asked why it is so.

“We’re quite happy to grow organically,” he says. “We don’t want to be overwhelmed because that reduces the experience for the customers.”

Francis and his wife Eileen opened Lot 8 at the end of last year, but the tiny restaurant has been several years in the making.

The couple sold everything they owned in Singapore and moved to Adelaide with their two infant children in 2009, after falling in love with Australia during a visit eight years earlier through Francis’s job in marketing for car maker Subaru.

They discovered the EcoVillage while on holiday on the Fleurieu Peninsula, and were taken by the ethos of the close-knit community. Soon after, they decided to make it their new home – but one thing they still missed about Singapore was the food.

“Especially the hawker culture – it’s so accessible and there’s so much variety,” Francis says.

“On weekends we used to cook something and share it with our Singaporean friends, who also missed it. We would share a meal that you couldn’t find here.

“We started doing that when we first arrived, and after some trial and error, over time you get better at what you’re doing and a few years ago we started to do that with the village as well, with friends and neighbours coming over.

“We had a long table which seated about 10 people. We’d have Hainanese chicken rice, hokkien noodles … a lot of them had never tasted this kind of food.”

Francis was working for a consultancy, training staff in the automotive industry, but he was ready for a change from corporate life. So when he and Eileen built their new home on Lot 8 in the Eco Village, they decided to create a small separate restaurant and commercial kitchen at the front of the building.

The restaurant opened last December, serving a rotating menu posted on Facebook of just three or four dishes a week (Thursday-Friday only) including laksa and other noodle bowls, Hainanese chicken rice, braised pork belly, chicken congee, spring rolls and dumplings. Customers were requested to pre-order via Messenger, and dishes regularly sold out. 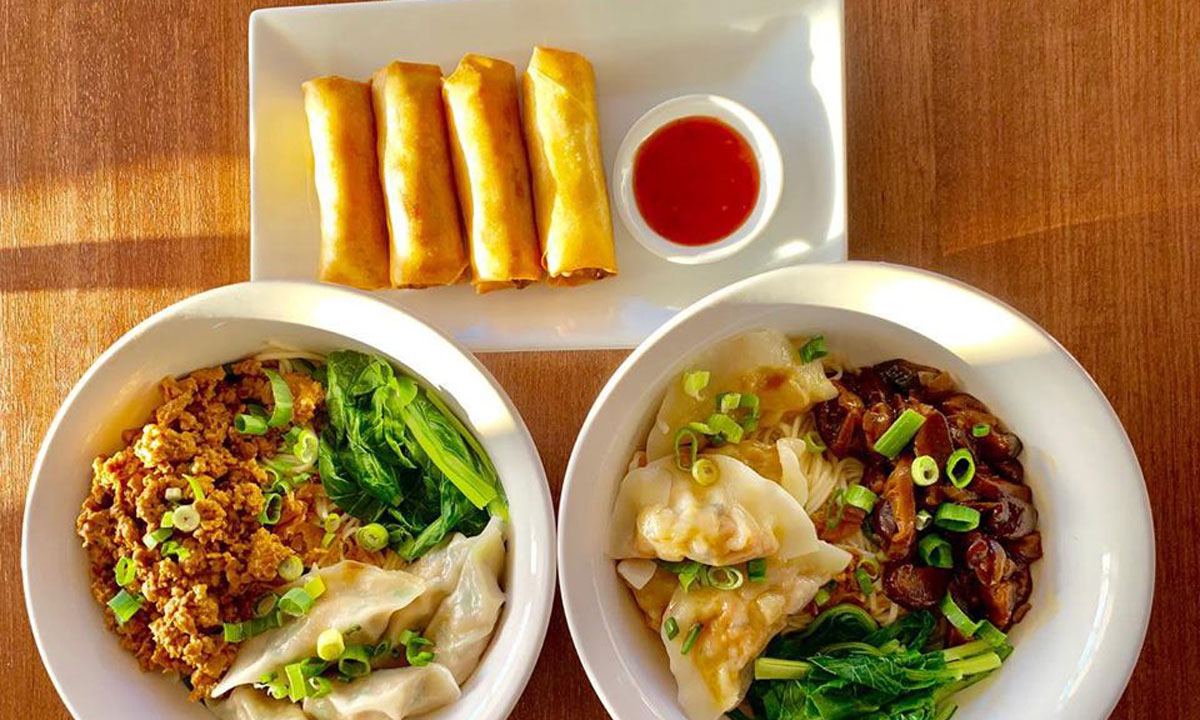 Some of the dishes that have featured on the Lot 8 menu.

While Eileen still works full-time in the city and helps in the restaurant in the evenings, Francis does the cooking. He has developed recipes through research and trial and error, adjusting the heat to suit more Westernised palates but with sambal on offer to for those who like it hot.

“It’s to compare with my taste memory of what it used to be when I was in Singapore,” he says of his recipe experimentation.

“If I can get it close to what it was like there, then I think that’s how the dish should be.”

He says hawker food developed in Singapore during a time of poverty and high unemployment in the 1960s.

“I think the easiest way for anyone to make a living was to carry two baskets on a stick and to sit down with a stove on one side and ingredients on the other side. People would come and buy whatever it was – satay or a bowl of noodles, similar to what you would find in Thailand, and in places like Vietnam and Cambodia.

“It’s simple food, just one kind of food, and because you do it all the time, you get better and better at it.”

Today, Lot 8 has settled on a menu focussed around customer favourites such as a char siu chicken or pork noodle combo (in dry, soup or laksa versions, with dumplings or fried wontons); a vegetarian dumpling noodle combo; beef brisket or red-braised pork with rice or noodles, braised tofu, egg and bok choy; and vegetarian spring rolls. 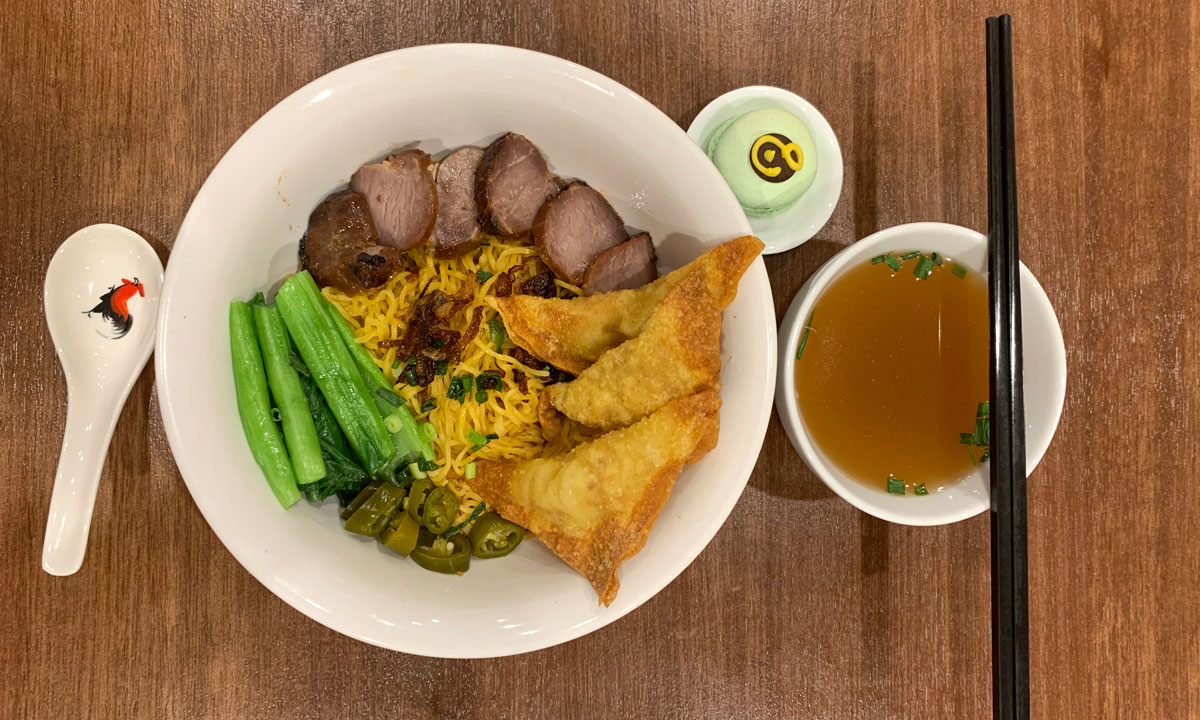 Char siu pork with deep-fried wontons – and a pandan macaron for dessert.

Lot 8’s intimate dining space – with a bookshelf, bespoke furniture and a homely feel – has a long table that sits adjacent to the counter and small open kitchen.

“We like the idea of people sitting around and talking to each other, engaging with each other … customers who come in alone or with one other person sit down with another group of people and start having a conversation,” Francis says.

“That, ideally, is the purpose of this place. It’s not just a place where you go in and buy something – it’s not so transactional in that sense.”

As for the name, it was already in track before the Lot 100 cellar door opened in the Adelaide Hills and Lot Fourteen was launched on the old Royal Adelaide Hospital site in the city.

“As we were tossing up other names, our neighbours would ask, ‘What are you going to do at Lot 8?’, or ‘Shall I see you at Lot 8?’, so we decided to leave it at that.”

Lot 8 is at 173 Port Road, Aldinga. Check out the Facebook page for opening hours and the current menu.