For the love of chocolate

“The whole idea when you walk in is that it’s about the chocolate and the kitchen behind it,” Adelaide high-end chocolatier Steven ter Horst says of his new King William Road shop, which offers a window on the chocolate-making process directly behind a mouth-watering display of cakes and sweets.

“It feels a bit more reminiscent of our [former] Unley Road shop than Rundle Street.”

Ter Horst shifted his chocolate store from Unley to the East End more than four years ago, with an off-site kitchen at Kilkenny. However, with the split business model proving unsustainable, he had been searching for some time for a new suburban location that could incorporate both the shop and kitchen – and he found it at 185 King William Road in Hyde Park.

The new Steven ter Horst Chocolatier premises opened several weeks ago, although work is continuing on a mezzanine level which will seat up to around 25 people and is expected to open in about a month.

With the on-site kitchen, he also plans to offer chocolate-making and chocolate education workshops, as well as cake-making courses where participants can learn to make petit gateaux like those sold in the shop.

“We’ve had a very good response [to the new store]. Because we started at the Wayville farmers’ market, then had our first shop at Unley, it feels like a bit of a homecoming for us,” ter Horst tells The Forager.

“We’ve always sort of had our heart in that neck of the woods. People who aren’t quite as fond of the foray into the city are very excited to be able to just park behind the shop and come in and say hello.” 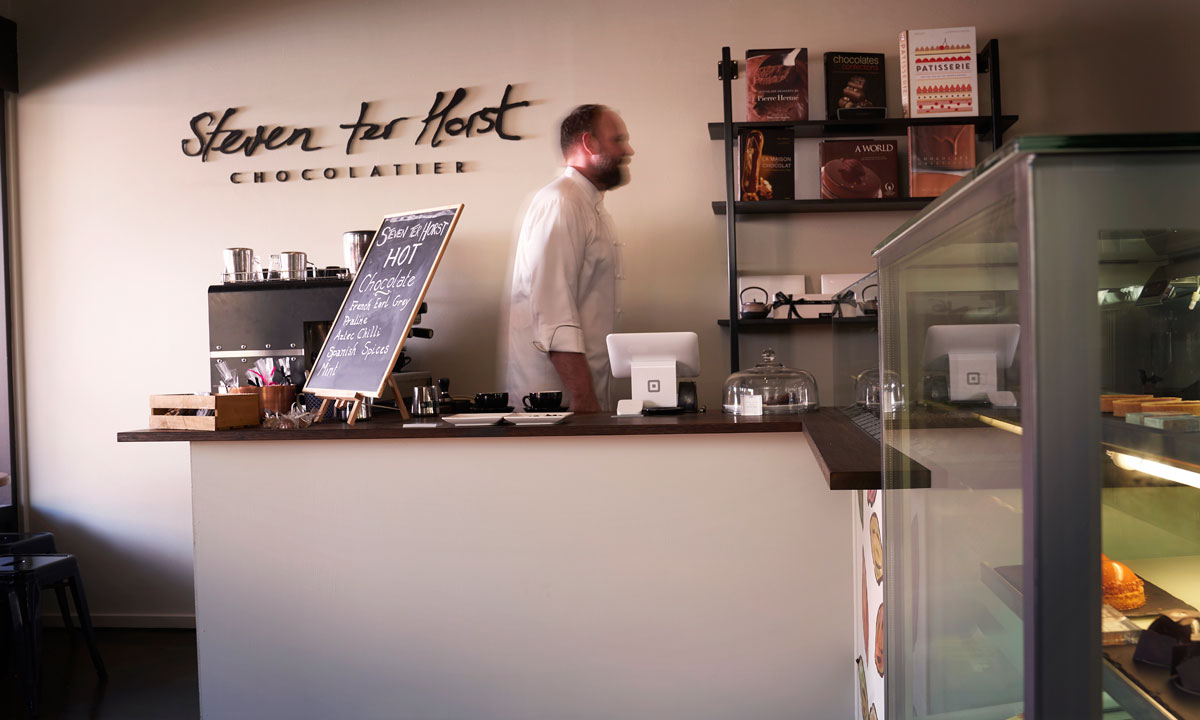 “When I was over in the UK a while ago there was a drink popular there called the London Fog – a strongly steeped Earl Grey tea which was then steamed through milk like a latte,” ter Horst says.

“I took that idea and swapped the Earl Grey out for French Earl Grey and made an infusion of that which I then steamed through the hot chocolate, so you get a really bright floral flavour coming through which is really lovely.”

Other new offerings include the Rainbow Road, a different interpretation of a Rocky Road which is made with honeycomb, marshmellows, a range of different nuts including pistachios, freeze-dried raspberries and Turkish delight, then sprinkled with hundreds and thousands.

As ter Horst told InDaily at the end of last year, trading in Rundle Street has proven a struggle in recent years, but although his lease there ended some time ago the shop will remain open until the landlord finds a new tenant.

“The shop [at 256 Rundle Street] is up for lease but we’re not leaving anytime soon. We’ve got a good landlord and we’ve said we’ll stay till he finds someone to take over so we’re happily staying there.

“At this point I can see us staying there till Christmas without any problem.

“Rundle Street has ebbs and flows … September tends to be a quieter time for the street so we’ll have to see how that goes, but we love Rundle and we love the people that come to visit us there.”

Now named the House of Health Collective, the new-look stall 72-75 in the north-west corner of the market will have its official opening this Friday and sells an expanded range including everything from organic fruit and vegetables and bulk wholefoods, to products such as hemp seed oil, kombucha scoby and keto bread.

Central Organic is owned by Ivan and Alex Oulianoff and House of Health by Chester and Robert Frank, with Chester saying the joint venture was inspired by their shared vision relating to sustainability, zero-waste and organic produce.

Within the stall they have created the new Field to Fork Wholefoods Kitchen, managed by Robert Frank’s partner Danielle Komarek, who was already creating raw sweets for House of Health.

“This is a beautiful opportunity for me here,” she says,

“I’m looking forward to being creative in the café, changing things weekly and being spontaneous … the options are endless.”

She says Field to Fork will offer seating for up to around a dozen people and sell mainly plant-based, gluten-free and refined-sugar-free food and drink, including coffee, juices, smoothies, salads, crepes and her trademark raw vegan treats such as a choc-mint slice, raspberry chia jam log and blackberry bounty.

The House of Health Collective stall will celebrate its official opening this Saturday with free samples of raw treats and smoothies, plus goodie bag giveaways.