Oldfield tells The Forager the opportunity for the extended venue arose when the lease became available for the premises next door to Musque.

“We wanted to do something that’s different … and it just happens I’ve got a passion for gin.

“We started with four gins when we first opened [Musque], then we went to 70 and now we’ve gone to just on 300 – about 130 of them you cannot buy elsewhere in Australia, which is really cool.”

The new expanded Musque now has capacity for 140 people inside and another 24 outside, having previously seated up to 64.

It has had a complete refit, courtesy of local firm SEAM, including new tables and a remodelled kitchen, but the most striking element is the bar area.  It occupies a distinct space within the restaurant, with the décor intended to be both quirky and reflective of its distillery/gin focus. 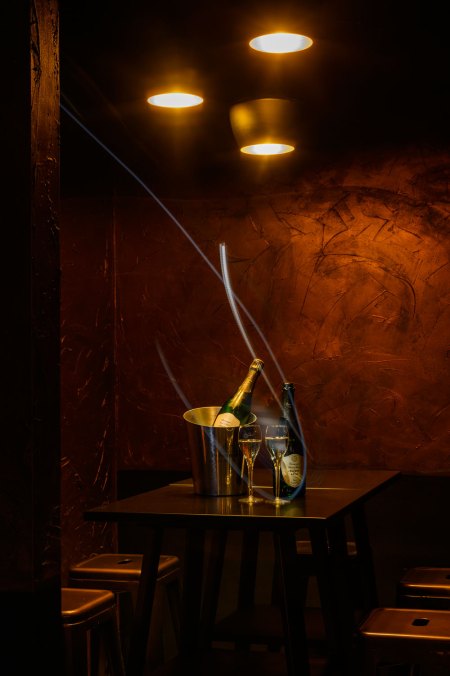 Copper walls enhance the warmth of the space. Photo: What Pete Shot

“People are wanting a point of difference,” says Oldfield, who also owns Hand Made Catering and previously set up the restaurant at Pike & Joyce winery in the Adelaide Hills.

“The room is dark, the walls are copper-painted – so you feel warmth and you want to sit there and drink gin with friends.

“We’ve made this little room that’s quite seductive.”

The bar itself is a curved gabion wall – made from rocks from the local Penrice quarry encased in galvansied mesh – behind which sits a 3.5m-tall set of shelves full of gin that can be accessed by a stainless-steel ladder.

“When I said I wanted a gabion wall with a massive bookshelf in behind it, they sort of laughed,” Oldfield says.

“But last Sunday [May 19] we closed down and on Friday at 4.30 we opened, so we built this whole place in five days.”

They did around a week’s normal trade in just two days after reopening, proving the locals’ appetite for both gin and something new.

While Musque is stocking around 25-plus South Australian gins, including from Barossa distilleries such as Seppeltsfield Road and Black Cat Gin, it also has an extensive collection of unusual and small-batch international gins imported directly via a wholesaler in London.

Among the more unusual ones are a gin from Israel, spirits with quirky names like the Sheep’s Eye Gin and the Ginger Ninja Gingery Gin, and gins flavoured with ingredients such as lychee, mulberry, black truffle, saffron and Thai basil.

“We’ve got the full Whitley Neill range [from the UK], so beautiful flavours like lemongrass and ginger, or aloe and cucumber, or raspberry or blood orange.

“We’ve also got a gin called the GinTing, which we sold out the whole bottle of on Friday night – it’s a passionfuit, mango and elderflower gin. People just raved about it.” 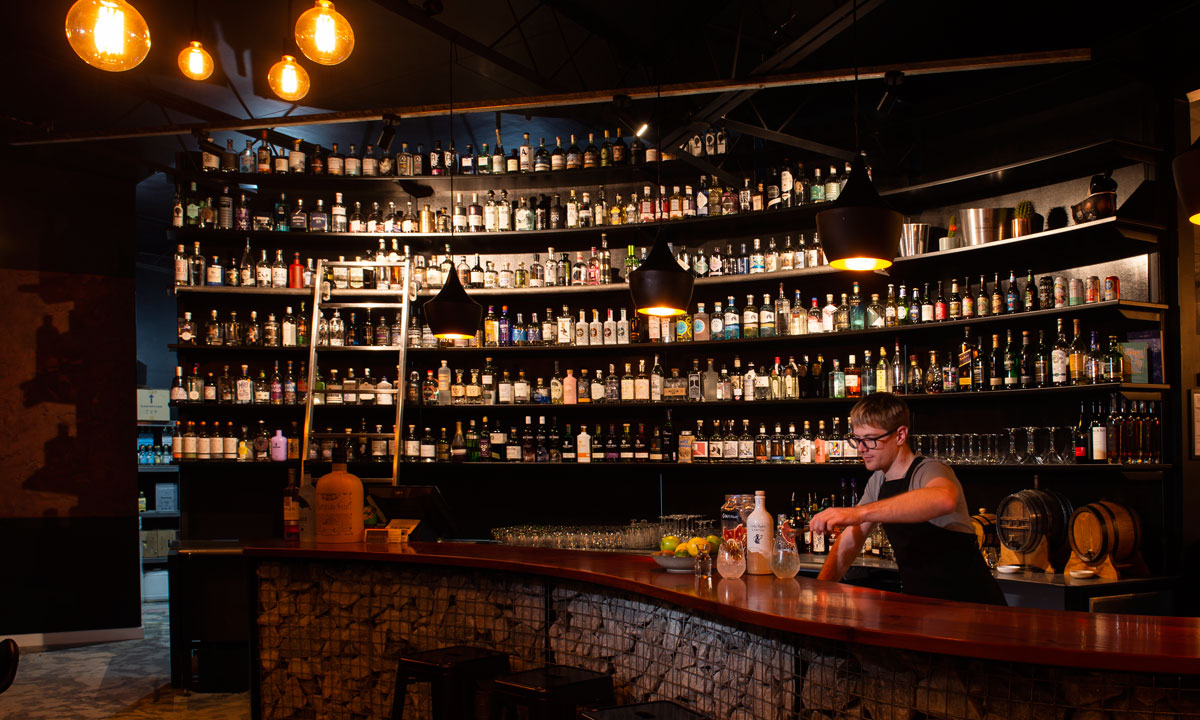 The curved gabion-wall bar is made with rocks from the local quarry. Photo: What Pete Shot

Musque plans to introduce a range of gin flights, such as The Taste of South Australia (showcasing five SA gins); High and Dry (London dry-style gins from around the world); Sweet & Innocent (aromatic and dessert-style gins) and Take One for the Team (barperson’s choice).

For diners, the restaurant has a sharing-style menu that changes every two weeks and features a range of dishes based around seasonal ingredients, with current options including Korean-style spicy Port Lincoln black mussels; pork belly with cauliflower, cider-braised lentils and roasted quince; and house-made gnocchi with buttered parsnips, fried brussels, parsley and hazelnuts.

It also offers a seven-dish tasting menu, and Oldfield intends to add an option with matched gins, saying many varieties pair perfectly with food.

“We’ve got a fresh coriander gin from Settlers, which is amazing – you put it with a laksa or a bit of squid or calamari with lemongrass and ginger and it’s a match made in heaven.”

Musque Food and Wine, on Murray Street in Tanunda, is open seven days, from 4pm Monday to Friday and from noon on weekends. It also hosts a monthly gin and tapas night which sees an SA distillery taking over the bar.