“There’s never enough whisky in the world,” says John Rochfort, when asked why he decided to establish a new distillery.

“Being able to have a distillery with the sea breeze in its own little valley was something I really couldn’t say no to.”

Rochfort, a former CEO of Tasmania’s Lark Distillery, has been making whisky for more than 20 years and is a passionate proponent of the SA spirit.

They worked fast to get the Rochfort Distillery up and running on the site just four months later, and have undertaken extensive renovations on an existing adjacent building which previously housed the Victor Harbor Winery cellar door and tearoom.

It has been turned into what Rochford describes as a “world-class whisky bar and lounge with 200-seat restaurant licence attached to it”.

With a smart fit-out including polished concrete floors, wood panelling and opulent leather seating, the L-shaped whisky lounge bar opened just over a week ago. As well as a full bar with beer and wine, it has an extensive range of Australian and international whiskies, with whisky flights and master-classes available.

“The whisky lounge is really designed for people to sit back and talk and learn about whisky,” Rochfort says.

“They can have a masterclass in whisky as well, but the idea is just to really take their time rather than sitting up at the bar.” 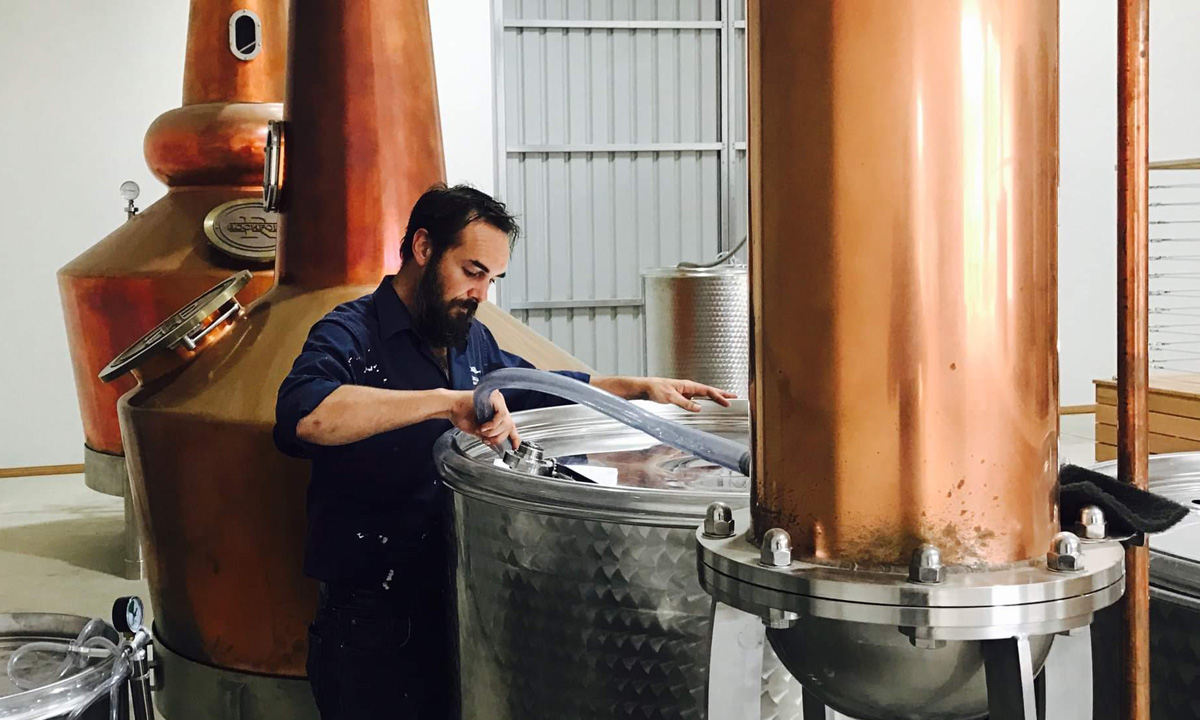 John Rochfort in the new distillery.

The whisky lounge and bar is open from 10am until 5pm, Wednesday through to Sunday, but will also open after hours for private group bookings or functions.

It is currently offering a light menu of meat boards and cheese platters, with the full restaurant kitchen expected to be operational in the coming weeks. Rochfort, a former chef, says his vision is for a fine-dining restaurant highlight South Australian produce.

“It’s likely to be contemporary Australian with a French influence and obviously with a whisky focus, so a lot of the dishes can be matched to individual whiskies.”

The focus of the Rochfort Distillery will be showcasing whisky aged in South Australian barrels with a rich provenance.

Single-malt, single-cask whisky made at the new distillery won’t be ready for at least three years (it must be aged for a minimum of two), but the first whisky bearing the Rochfort Distillery label was released this month, made from the family’s private collection of barrels.

The whisky was aged in casks acquired from winemaker Geoff Hardy which were brought to Australia in the 1890s by his great-great grandfather Sir Thomas Hardy, originally holding brandy and later Muscat.

A distillery with a view.

“We [the family] have a large collection of privately owned barrels, some of them mature, some very mature, some not mature yet,” Rochfort says.

“While we’re waiting for this distillery’s whisky to come of age, we are slowly releasing some of our private barrels, all of which were mashed and distilled by the family.”

As well as developing the distillery, they have been busy cleaning up the Hindmarsh Valley property and repairing an extensive network of watering systems. Rochfort says that in the early 1980s, a government grant was used to plant gum trees and sheoaks on the property – all on drip systems – to counteract a salinity problem exacerbated by previous land clearing.

“We’re trying to re-establish all that effort, and to go further with it and create a sanctuary so we have something absolutely amazing.”

Long-term, he wants to plant lavender and establish a honey farm.

The distillery also intends to host a number of events throughout the year, beginning on May 1 with a $150-a-head, Islay versus Rochfort degustation with whisky brand ambassador Dan Woolley. It will include a five-course degustation with dishes matched to whisky, a tour of the distillery and a whisky quiz (inquiries here).