Jill Dupleix has been writing about food for more than three decades and, as she says in her introduction to Truth, Love & Clean Cutlery, she’s swallowed more than her share of “beautifully plated ego”.

But she’s also witnessed a marked change in recent times, with a shift towards a kinder kitchen culture, chefs championing farmers, and venues of all sizes embracing more sustainable practices.

This has coincided with growing public awareness about broader environmental and sustainability issues – from the impact of single-use plastics to the ethical production of meat.

“You can’t just put all that aside and go out for dinner without hoping that the restaurant you dine in shares some of those values,” Dupleix tells InDaily, explaining diners’ growing interest in restaurant ethics and sustainability.

“It’s a sign of a community coming together with like-minded values. I’ve been a part of the restaurant industry for around 30 years, but I’ve never felt this sense of community as strongly as I do now.” 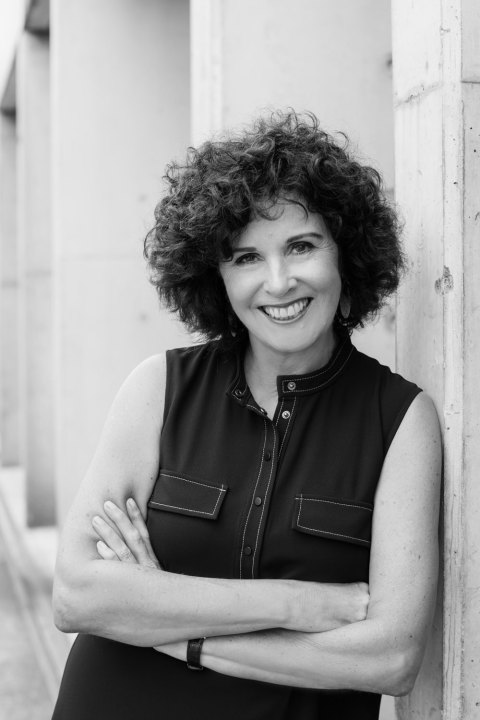 All of which, she says, makes this month’s publication of Truth, Love & Clean Cutlery – A Guide to the Truly Good Restaurants and Food Experiences of Australia particularly timely.

“We couldn’t have done anything like this even five years ago. I don’t think there was a need that would have been recognised.”

According to its publishers, Truth, Love & Clean Cutlery offers “a new, kinder way of choosing where to eat” that recognises best practice among restaurants in their efforts to reduce carbon emissions, support their communities “and make the world a better place – plate by plate”.

Part of what is believed to be the world’s first series of guides to ethical and sustainable restaurants, it is accompanied by a website guide featuring restaurants from 45 countries.

The 208 Australian restaurants in Truth, Love & Clean Cutlery are listed by region and range from small cafés and country diners to fine-dining city restaurants.

Among them are 33 South Australian venues, including city restaurants such as Africola, Botanic Gardens Restaurant, Iberia, Peel Street, Shobosho, Peter Rabbit and Restaurant Orana, and regional restaurants like Bombora café at Goolwa, Fino and Hentley Farm Restaurant in the Barossa, Pipers of Penola, Maxwell Restaurant and The Salopian Inn in McLaren Vale, Summertown Aristologist, and Sunset Food and Wine on Kangaroo Island (see extracts below).

Dupleix – who is currently food editor of The Australian Financial Review Magazine and a former food editor for The Times in London – enlisted the help of a team of experienced food writers as regional editors (including Nigel Hopkins in SA) to assist in the creation of a shortlist. Chefs and restaurateurs were then asked to complete what she describes as a “massive and rigorous survey”.

While “deliciousness” of food was paramount, restaurants were questioned on things such as how they sourced their seafood, seasonality of ingredients, energy usage, waste minimisation practices, treatment of staff, levels of community involvement and menu choices (including kids’ menus and the availability of healthy options and meat alternatives).

“I was worried we wouldn’t get many responses because I know how busy chefs and restaurants are,” Dupleix says.

“I was a bit overwhelmed when I found they were busting to fill out this survey … reading the responses, I’ve been on a real high.”

She says some of them ran to 4000 words, with restaurants eager to share information about their favourite producers, and explain in detail how they talk to suppliers about things such as water efficiency and the use of different materials in packaging. 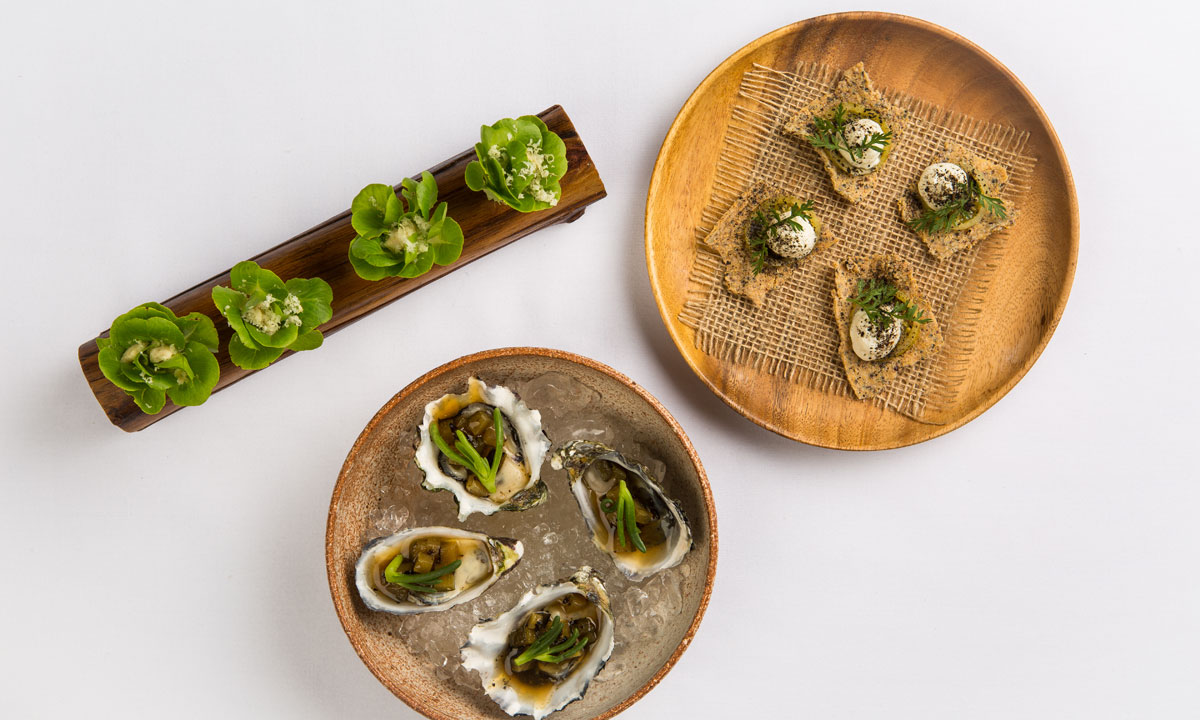 Many different policies and practices were shared – from a tiny Tasmanian café which has eliminated plastic storage containers from its kitchen and a Queensland project turning café waste into compost, to a WA chef working with Indigenous elders to source local ingredients for one-off outdoor dining experiences.

“There’s one very inner urban hipster wine bar that realised their staff wanted to ride their bikes to work but had nowhere to leave them so it supplied storage for all their bikes.”

Dupleix says that in South Australia, the sense of connection between restaurants and their local communities and suppliers is particularly strong, possibly because there is less distance between paddock (or vineyards and fisheries) and plate.

“The lines of communication are a little clearer and a little faster, so I think that’s why we have such strong representation from Adelaide and through the regions.” 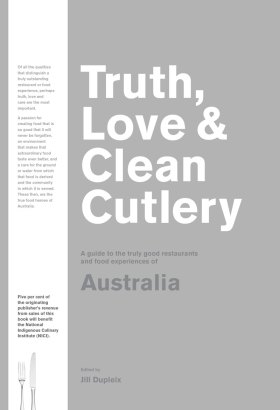 She adds that “there seems to be a lot more of an awareness of the need to not trash the environment; that we are lucky to have what we have around us”.

“I think the word local is really key for South Australia.”

Another thing that emerged from the SA inclusions in Truth, Love & Clean Cutlery was that many of the state’s regional restaurants are being run by people who have made a deliberate sea or tree-change to run a business the way they want to and be part of the local community.

She commends Zonfrillo for the way in which he is championing native ingredients and “using his talent to turn them into something in the kitchen that can really make you cry”.

“I think Restaurant Orana is one of the most the significant restaurants in Australia.

“I’ve been a supporter right from the start because I can see the purpose and mission behind it.”

Ultimately, Dupleix says, she hopes Truth, Love & Clean Cutlery will have a “resounding impact” – that it will encourage more chefs and restaurateurs to do the right thing, and encourage more diners to support them.

So just how important is clean cutlery?

“The title just demanded that this book be about the most sustainable, the most ethical … and the cleanest cutlery of all.

“And lots of truth and love, too!”

A taste of the SA restaurants featured in Truth, Love & Clean Cutlery

The co-owners of Hindley Street’s Peter Rabbit, Jack Nelligan and James McIntyre, told the guide’s editors that they had sought to create “a garden oasis amid the concrete jungle of the surrounding university buildings and rusted steel forest of an adjacent power station”, adding: “… we are passionate about place, flavour and everything local”.

The editors praised the “shipping-container-turned-café” for its “simple, affordable and ethically produced cooking”:

The small seasonal menu highlights local produce – often “seconds” – while the chefs forage in the Adelaide Hills for fennel fronds, wild cress, nasturtium, dandelion, onion weed, blackberries, mushrooms and more. Heating and a lot of the cooking is by wood fire; seating is under trees, and the café rooftop is home to both a Honey Alchemist beehive and working herb garden.∗

Described as a “local – very local – restaurant on Kangaroo Island”, Sunset, owned by UK-trained chef Jack Ingram, says it works with small producers and growers on the island, and changes its menu with the local seasons, “which are usually weeks behind the mainland”. 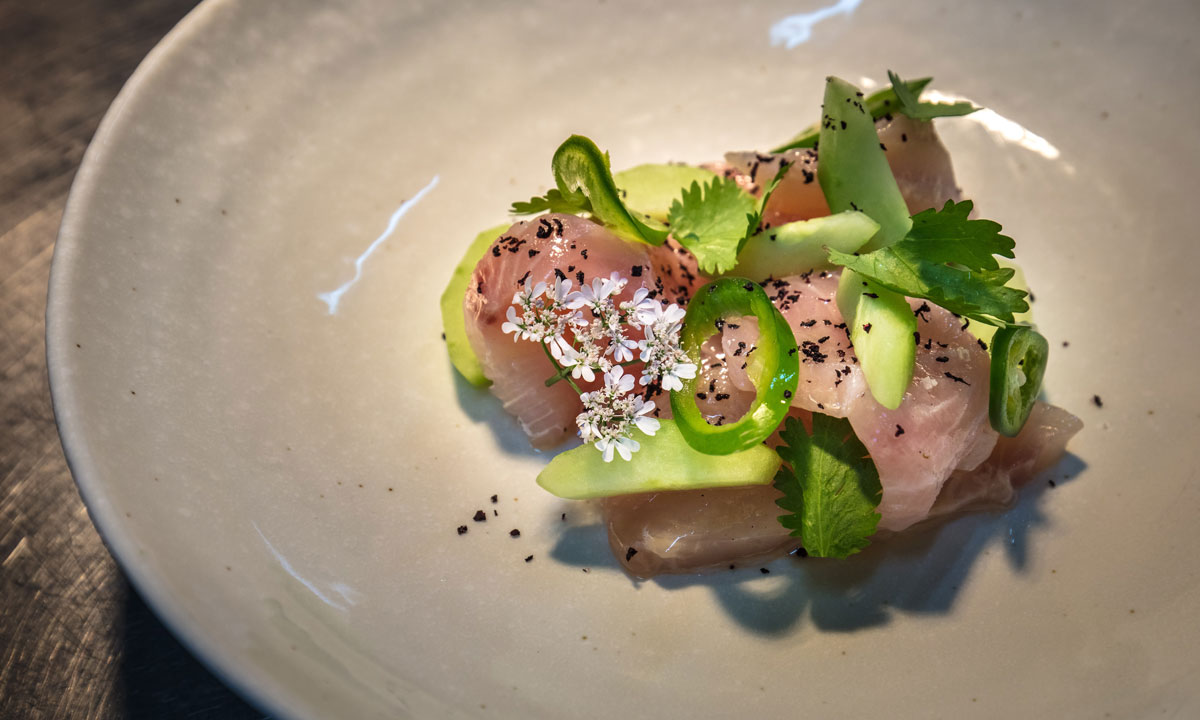 Truth, Love & Clean Cutlery says it is “a small, friendly restaurant” that “explores the superlative produce from Kangaroo Island’s unpolluted land and sea”.

Kangaroo Island rules the day, with island wine, cider and beer on the drinks list, and local honey, olive oil, potatoes, garlic, abalone, lamb, oysters and King George whiting inspiring the menu. Ingram forages for coastal herbs and succulents, wild garlic, sorrel, and mushrooms, sourcing fish from small local boats and taking what they have – even unpopular fish such as snook – and making the most of it.∗

SA’s Botanic Gardens are said to be the main source of inspiration for executive chef Paul Baker’s menu, with the restaurant telling the guide: “When we have a glut, we pickle, ferment, and candy fruit, ready for any seasonal shortfalls.”

The guide’s editors say the gardens provide an idyllic setting, and inspire everything from a satsuma plum garnish to house-made vermouth with 13 different botanicals.