Since James Boden took up the role of wine coordinator at the National Wine Centre five months ago, having previously been the sommelier at Appellation at the Louise in the Barossa, he has increased the number of Australian wine regions represented in its Wined Bar offering from around 10 to 48.

His goal, eventually, is to have at least 60 wine regions on show.

“The way I think about it is that the National Wine Centre should be a neutral zone, and by that I mean we should show anything and everything and not have a bias to a particular winery or region – so if it’s Australian, we’ll show it,” Boden tells InDaily.

“When I started, about 85 per cent of the wines were South Australian; now it’s 50 per cent.

“There’s a lot more wines from places like Canberra and different pockets of Victoria … we even have a wine from Gundagai in country New South Wales.”

The wines are available for tasting through the centre’s 120 Enomatic dispensing machines, which use special technology to keep them in optimum condition.

Boden says local wine enthusiasts are excited by the extended range of wines available, but there are still plenty of South Australian wines on offer to give interstate and international visitors a good taste of the state’s winemaking regions.

“If someone is interested in Rieslings, they will find eight Rieslings from eight different regions.

“It’s like when you go to the movies and you have that candy section and you just don’t know what to have because there’s too many options – I want it to be the adult version of the kid-in-the-candy-store scenario.

“The wine industry in Australia is incredibly diverse – there are always winemakers making new things and pushing boundaries, so we need to be as diverse as possible because we want to reflect the industry.” 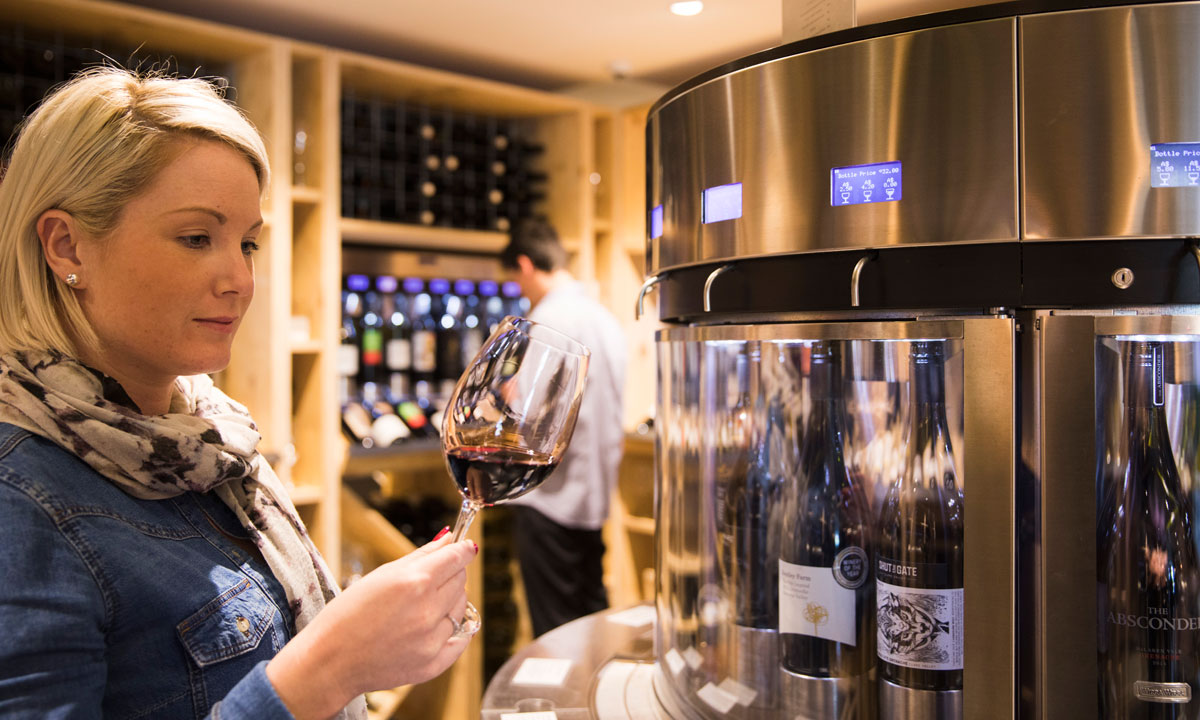 Boden encourages wine drinkers to “try something new”, recommending Friulano and Vermentino as examples of “fantastic Italian alternative grape varieties” which are ideal for spring drinking.

He also pulls out a bottle of Assyrtiko, a Greek variety, from Jim Barry Wines in the Clare Valley: “I would also like to see more Assyrtiko – Jim Barry makes one and they are the only grapes of this wine in Australia … it goes perfectly with seafood.

Boden’s own serious interest in wine begin when he was working for Rockpool Bar & Grill in the Crown Casino in Perth.

A keen middle-distance runner, he competed at national level and was fully focussed on his sport until his mid-20s, when fell into a hospitality career after moving from Adelaide to WA, the home state of his then-girlfriend and now wife – fellow runner and former Crows AFLW football player Monique Hollick.

On busy nights, Rockpool seated up to 300 diners, and Boden’s running skills came in handy in his role as a “wine runner”, ferrying bottles from the cellar to the restaurant as they were ordered by the venue’s three sommeliers.

“It was very apt for me,” he says, laughing.

“I like the term ‘wine runner’, and I took it really seriously as well – I was as quick as possible getting the wines to them. I did a lot of fast walking mid-service.”

He fell in love with hospitality and learned quickly from the experienced sommeliers with whom he worked, developing an interest in the historical and geographical aspects of winemaking, as well as the stories behind different wines.

Boden became a sommelier himself at Rockpool, and since then has gained his Court of Master Sommeliers certification and worked in a range of roles in the industry to further his experience, including doing a vintage in the Barossa, working as a cellar-door manager for a small winery in Perth, then returning to the Barossa first as a sommelier at Jacob’s Creek and St Hugo restaurant, and then at Appellation at the Louise.

While sommelier – or “somm”, as they’re known in the industry – might seem a dream career for a wine lover, Boden says it requires dedication.

“It’s hospitality, so if you truly want to do it you give up your weekends and nights.

“It’s basically a lot of hard slog to learn it and a lot of sacrifices starting out. And if you want to be a successful sommelier, your career is working weekends and nights … it’s not for everyone.”

Some days, he might have to taste up to 100 wines – “usually I max out at around 100” – and says having a good memory for tastes and smells is key to developing a wine palate.

If you tell a lovely story about the winemaker, people are going to want to drink the wine

“My advice for people is if you’re smelling a wine, think about all the potential fruits in your head – Is it citrus? Is it melon? Is it tropical fruit? – then you start triggering what it smells like… it’s about breaking it down.

“It should never be a pretentious thing – and it’s fine if you don’t get things or smell things.”

When it comes to his favourite go-to wines at home, Boden says he always likes to have some Riesling and Chablis in the fridge, with one of his favourites being a Riesling from Castle Rock Estate in Porongurup, WA.

In his wine rack, you’ll likely find a few bottles of red from Mount Etna in Sicily and at least one South Australian Grenache – quite possibly JC’s Own, from Barossa Valley winemaker Jaysen Collins.

“He’s a lovely bloke … when you meet someone who’s passionate about their wine, it makes it easier to drink it.

“In the food and wine industry, I find it’s a lot story-based. It’s more important to have a story about someone that brings their wine to light rather than the details of the alcohol content or the oak or things like that.

“Whenever I go to a winery, I try to seek out those stories … if you tell a lovely story about the winemaker, people are going to want to drink the wine.”