While the cellar door won’t have its official opening until spring, the winery’s owners – husband and wife team Sam and Rachel Atkins – say they wanted to have it “up and running” for the Hills’ annual Winter Reds festival this weekend.

The Atkins family has been farming in the Adelaide Hills since 1929 and Sam Atkins started Fox Gordon in 2000, with the Kuitpo vineyard only around 10km from the original farm.

“It’s a really beautiful large vineyard and it’s on the border of McLaren Vale and the Adelaide Hills, so where we are on Range Road you can see the ocean,” Rachel says.

“It’s quite lovely and picturesque.”

Although Fox Gordon already has a city cellar door on King William Road at Goodwood, she says they wanted to also showcase the vineyard.

The property on which it is based was previously a dairy farm, and one of its original Besser Block sheds has been repurposed for the new cellar door.

Two large sets of bifold doors maximise the view out towards the vines, plus there is a deck and a large area of lawn that will be utilised for events and functions. 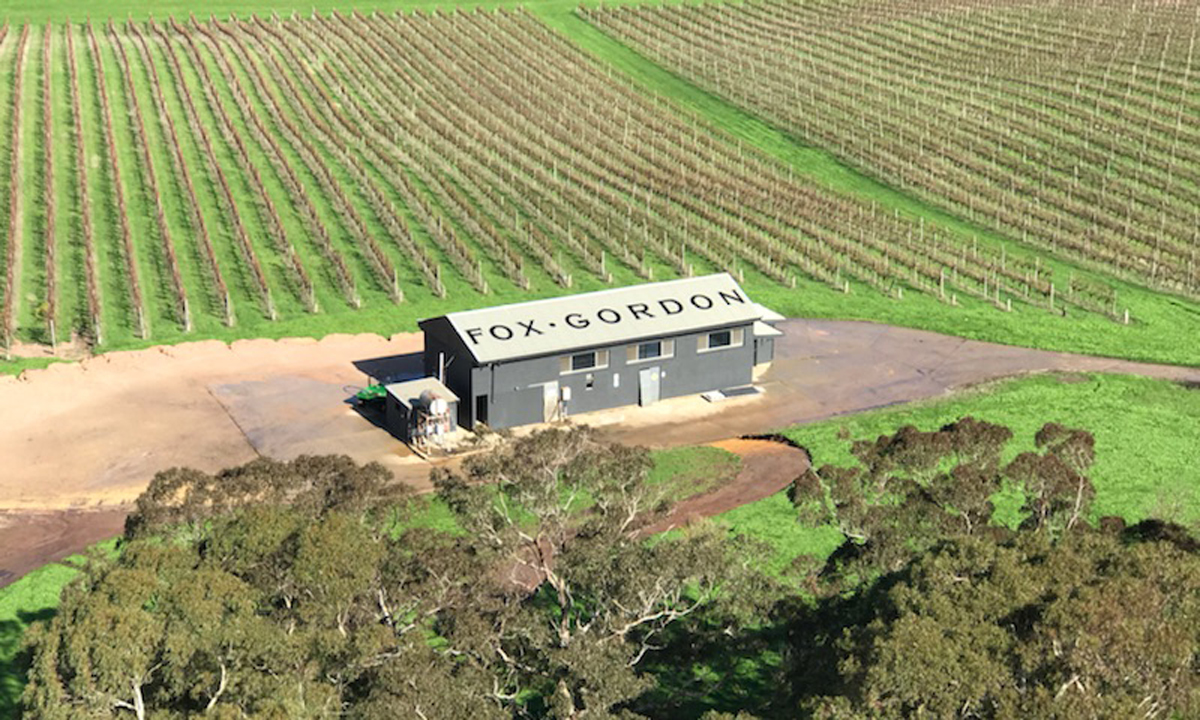 An aerial photo of the rear of the cellar door before the new lawn area was planted. Photo: Aerotec

Inside, oregon timber from a dilapidated 120-year-old hayshed on the property has been recycled by a carpenter for the 3m-long tasting bench and cabinetry, and a potbelly fire will keep visitors warm during the cooler months.

Rachel says the walls will feature paintings by Adelaide artist Sarah McDonald, who found inspiration while hiking in Kuitpo Forest.

“It’s actually not vineyard art, it’s of the forest, and the colours are just extraordinary.”

One of artist Sarah McDonald’s paintings for the new cellar door.

As part of the Winter Reds festival, Fox Gordon will celebrate the new cellar door with an event on Saturday dubbed Bravio (the name of its new-release Montepulciano). It will include drinks in the cellar door, live music by Adelaide band Hurting Curtis, and a three-course sit-down lunch in a pavilion.

A highlight of Bravio will be a barrel race in which contestants roll wine barrels up a slight slope between rows of vines.

“So we’ve been practising in the vineyard. We will re-enact the race … it will be a lot of fun.”

She says after the Kuitpo cellar door is officially opened in September, it will be able to cater for events ranging from weddings and corporate functions, to intimate private wine tastings and summer picnics on the lawn.

Atkins, who has a keen interest in wellness, also plans to introduce monthly yoga sessions at the winery.

“So you can go for a hike in the morning, do a yoga session and then have a little light lunch and a glass of wine.

“It’s exciting,” she adds of the cellar door. “There are just so many opportunities for us.”

Details of the Fox Gordon Winter Reds event Bravio can be found here. The Kuitpo cellar door, at 474 Badgers Road, will be open by appointment only until its official launch in spring.