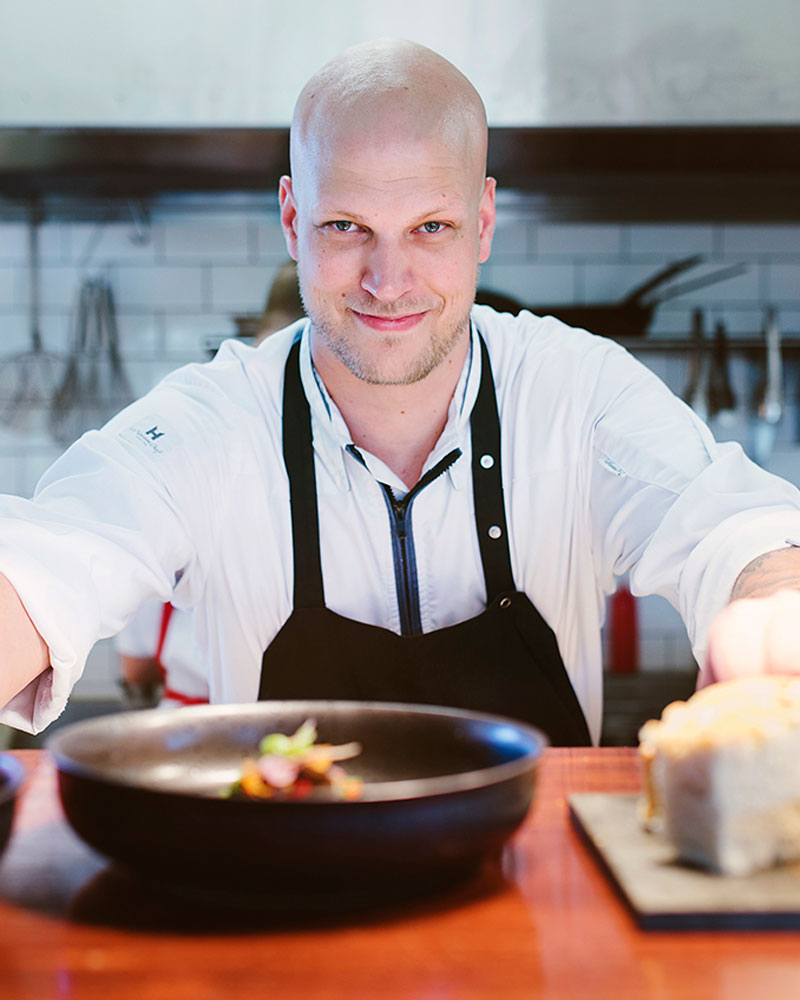 Dubbed the “Viking chef”, Joachim Borenius helms the kitchen of Sydney’s Mjølner, a restaurant which describes itself as being created in Thor’s image and offers a unique dining experience during which guests are invited to choose from a selection of ornate handmade knives to carve up their food.

Now, the Swedish-born Borenius – who has previously worked at Sydney’s Pei Modern and Marque, as well as the three-Michelin-star New York restaurant Per Se ­– is on his way to McLaren Vale to join with local chef Fabian Lehmann for Maxwell Wines’ Winter Feast.

“We do the Winter Feast annually and this is shaping up to be the most exciting one yet,” says Maxwell marketing manager Christian Burvill-Holmes.

“It will be hearty, fun, shared-table-style food, and that’s exactly what Joachim does at Mjølner.”

This will be the first Winter Feast to feature a guest chef, and Burvill-Holmes says Mjølner is a fitting partner for the event, which has always had something of a Medieval/Viking vibe.

He adds that given both Borenius and German-born Lehmann have worked at Michelin-starred restaurants in Europe, guests can expect a high level of “creativity and sophistication”.

The two $150-per-head dinners, on August 10 and 11, will feature at least five courses, plus snacks, with a combination of individually plated and shared dishes highlighting local produce.

As a taster of what’s in store, Lehmann says one of the dishes will be Maxwell Honey Mead-glazed Berkshire pork (from Currency Creek free-range pork producer 81 Acres) with roasted apples.

Adelaide Central Market’s “Mushroom Man”, Marco Marinelli, tells InDaily warmer-climate truffles from Western Australia are currently retailing for around $2000 a kilo (or $2 per gram) while Tasmanian cold-climate truffles are around $3000 a kilo.

“Yields are much lower in Tasmania. Cold-climate truffles also tend to have a stronger aroma … truffles are always sold on aroma, but a truly good truffle should have a really good aroma and a good flavour.”

Marinelli is involved in a number of upcoming events showcasing truffles, including a sold-out five-course dinner at Magill Estate Restaurant this weekend, A Truffle Affair ($259pp) with chefs Cheong Liew and Bethany Finn at Mayflower Restaurant on August 15 and a Winter Reds and Truffle degustation ($140pp) at Rigoni’s Bistro on August 11.

For a more casual – and affordable – taste of truffles, he says Magill Estate Kitchen is serving a $25 truffle pasta, while at Osteria Oggi, diners can pay to have fresh truffle shaved over their meal (you can either order a whole truffle, paid for by weight, and have it shaved over as many dishes as your like, or pay $20 to have at least 4g of truffle shaved over any one dish on the menu).

The Australian truffle season officially begins at start of June and ends around mid to late August, but the Mushroom Man usually still has fresh truffles until at least mid-September.

Marinelli says it’s an exciting time for the industry, with more Australians now attempting to grow truffles and many inoculated trees close to producing the fungi (something which can take up to 10 years).

Although there are no truffles currently produced in South Australia, he says around eight Adelaide Hills properties have inoculated trees – typically oaks or hazelnuts – and one is likely to have truffles in the near future.

“Potentially we could see them as them as soon as this year, but I’d be very surprised if we didn’t see them by next year.”

A new head chef for Level One

Level One Restaurant at Electra House has appointed a new head chef but says diners can expect the same style of modern Asian cuisine with “bold flavours and local ingredients”.

Josh Kim (above) comes with experience in a range of Sydney restaurants – including Mr Wong, Sokyo and Queen Chow – and takes over from former Level One head chef Jamie Kang, who has taken up a role at international restaurant chain Zuma in Dubai.

Earlier this month, the King William Street restaurant introduced a new short tasting menu for winter, where early diners from Tuesday to Saturday can pay $49pp for “a small plate, a large plate and a glass of South Australian wine”.