“On Friday and Saturday nights, what we saw is that people just want to hang out there,” Liston tells InDaily of Shō, an eight-seat space which opened on the weekend.

“It really is just like sitting around a barbecue and having a chef cook for you; they serve beers, they serve sake, they serve whisky to you.

“It’s an interactive experience … and it’s like being in a subway in Tokyo.”

Shōbōsho opened around the middle of last year and serves a Japanese and Korean-influenced menu. Owned by entrepreneur Simon Kardachi, it is one of three of his Adelaide restaurants that were this week named in the Australian Financial Review’s list of Australia’s Top 100 Restaurants.

Shō is described as the latest evolution of Shōbōsho, where the main dining space is upstairs and seats 70 people.

“But when you were sitting downstairs at street level, you couldn’t see all that, so we wanted to bring some of that energy downstairs, and yakitori [skewered chicken grilled over charcoal]  is something I’ve always loved doing.” 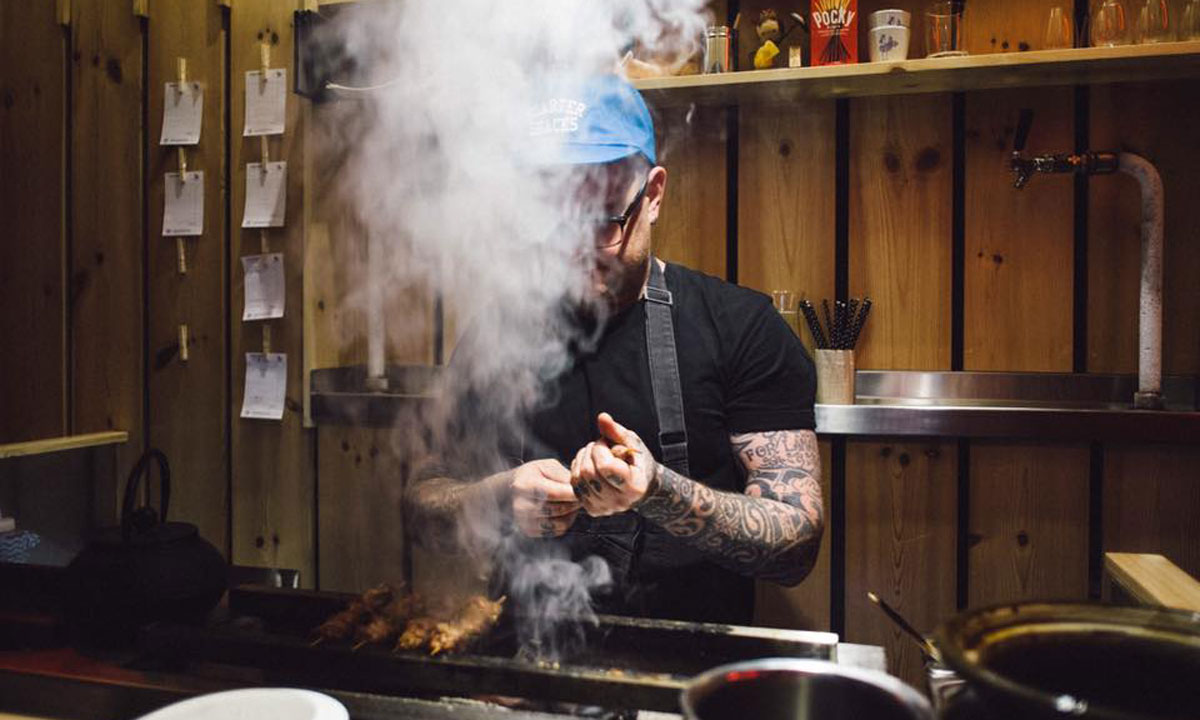 Where there’s smoke: Adam Liston on the Shō grill.

Liston – who was previously head chef at another Kardachi restaurant, The Melting Pot – says it is difficult to maintain quality when cooking yakitori for a large number of people, with diners ordering up to seven sticks each. This makes the eight-seat bar ideal.

The Shōbōsho chefs break down fresh chickens each day for the yakitori, with a range of different cuts –  including offal – on offer.

While yaki means grill and tori means chicken, Shō also serves kushiyaki, which essentially means any skewered and grilled food. In this case, it includes vegetables, pork and beef, such as Sher Wagu 9+ strip loin and rump.

Liston says that traditionally, the measure of a good yakitori shop is its tare – a kind of sweet and salty sauce made with soy sauce, mirin, sake and roasted chicken bones.

“That pot sits next to the yakitori grill and we cook the sticks then dip them into the sauce and then grill them again so it’s basically like a glaze.”

He travels to Japan every year, and Shō is very much inspired by the small restaurants he enjoys dining at in Tokyo.

“I just love it because of the vibe,” he says, explaining why yakitori is one of his favourite styles of cooking and eating.

“If you’ve eaten good yakitori, like in Michelin-star places in Tokyo, you can have a very serious experience with all the layers and the way it’s been cooked – even though you would think something on a stick is so simple, it can actually be quite technical.

“But then you can also see it on another level, which is also just as fun, like being in a really good izakaya in a subway in Tokyo.

“You don’t have to be a wine person or a food person to be able to engage with it, and I like that.”

Shō has Suntori whisky highballs, Japanese beer and sake on tap, and down the track Liston is considering also offering a curated menu with matching sake for diners interested in booking all eight seats for exclusive use.