Almonds are the edible seeds of the almond tree – a deciduous tree that originates from the Middle East and South Asia.

The trees go through an annual growing cycle where they are dormant over the early winter months until white or pale pink blossom starts to appear in July. Almonds trees are not self-fertile and rely on bees to cross-pollinate between the blossoms of the different varieties planted in the same orchard.

The annual flowering of the trees is celebrated each year in the Southern Vales with the Willunga Almond Blossom Festival, to be held this year on July 30 and 31.

The fruit matures seven to eight months after flowering. It has an outer hull and a hard shell enclosing an edible seed. The hull begins to split during summer to expose the almond shell which then begins to dry out ready for harvest.

Harvesting occurs in autumn between February and April, when the trees are shaken so the fruit falls to the ground. The shells are removed to get to the edible seed allowing the almonds to be further processed to make almond meal or flour.

Almonds are reputed to have many health benefits and are a key part of diets which encourage the consumption of “activated” almonds. This process requires almonds to be soaked in water for a period which is believed to help the body to gain the full benefit of the nutrients.

Almonds can be used in many recipes for both sweet and savoury dishes. See the Almond Board of Australia website for its recipe database full of almond snacks, cakes, biscuits, appetisers and meals.

Fresh local almonds from the 2016 harvest are now available at local farmers’ markets. You can find almonds at Adelaide Showground Farmers’ Market at the Taronga Orchards, EKO fruits, The Almond Block and DJ Garden Fresh Citrus stalls on Sundays from 9am to 1pm at the Adelaide Showground, Leader Street, Wayville.

This week Lyndall Vandenberg, marketing and communications coordinator for the Willunga Farmers’ Market, shares her recipe for Granola with Almonds and Honey.

“Making granola is incredibly easy and satisfying,” she says. “It’s wonderful to have a big jar of it in the kitchen, to spoon over fruit and yoghurt, or to have as it is, by the handful, as a snack.” 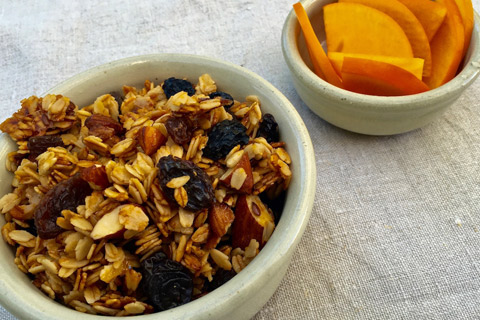 Granola with Almonds and Honey

Combine all dried fruit and set aside.

In a separate bowl, combine rolled oats, nuts and pumpkin seeds. Heat oil and honey in a saucepan until simmering, then pour over the nuts, seeds and oats and mix well. Tip into a lined, large, shallow baking dish and spread so that mixture is evenly spaced over base of dish. Bake for about 45 minutes to 1 hour, stirring frequently, until mixture is thoroughly toasted and golden brown. Remove from oven.

Stir in dried fruit while still hot. When cool, store in an airtight container for up to two weeks.