Take one wild winemaker, add one wild chef and a splash of wild weather, stir in two of the hottest young chefs from New South Wales and apply plenty of fire.

That was the recipe for one of the most extraordinary lunches of the year, held in South Australia on the weekend as part of the Australia’s Top Restaurants nationwide dining program. It was billed simply as a four-course lunch of rustic fare – but we lost count after around 20 fabulous morsels and platters were launched into what became a five-hour culinary tour de force. 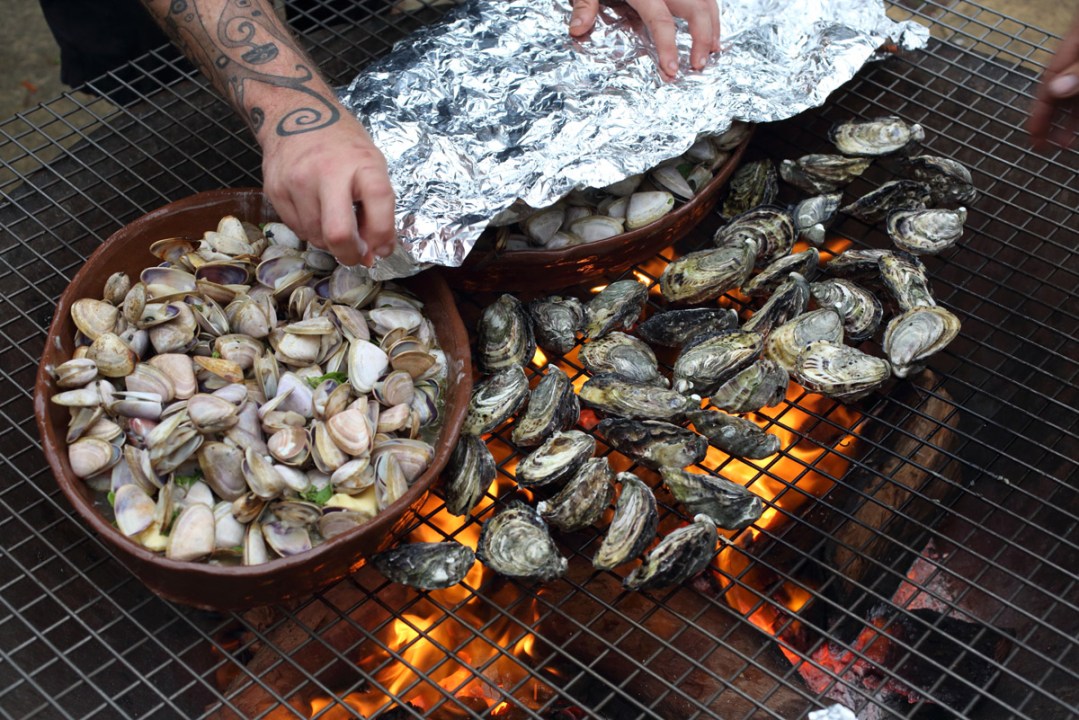 The firemasters were Africola’s Duncan Welgemoed and his newly arrived head chef Alex Drobysz, who were joined by Darren Robertson and Mark LaBrooy from Three Blue Ducks (Byron Bay, Bronte and soon to open in Rosebery, Sydney, in Kitchen by Mike’s former premises).

The winemaker was Taras Ochota, who had raided some of his favourite Ochota Barrels barriques, this year’s vintage, just two or three months old, cloudy, juicy, utterly delicious – a chardonnay, grenache rose, pinot grenache. Health juice with a dash of alcohol. It just kept on being poured. 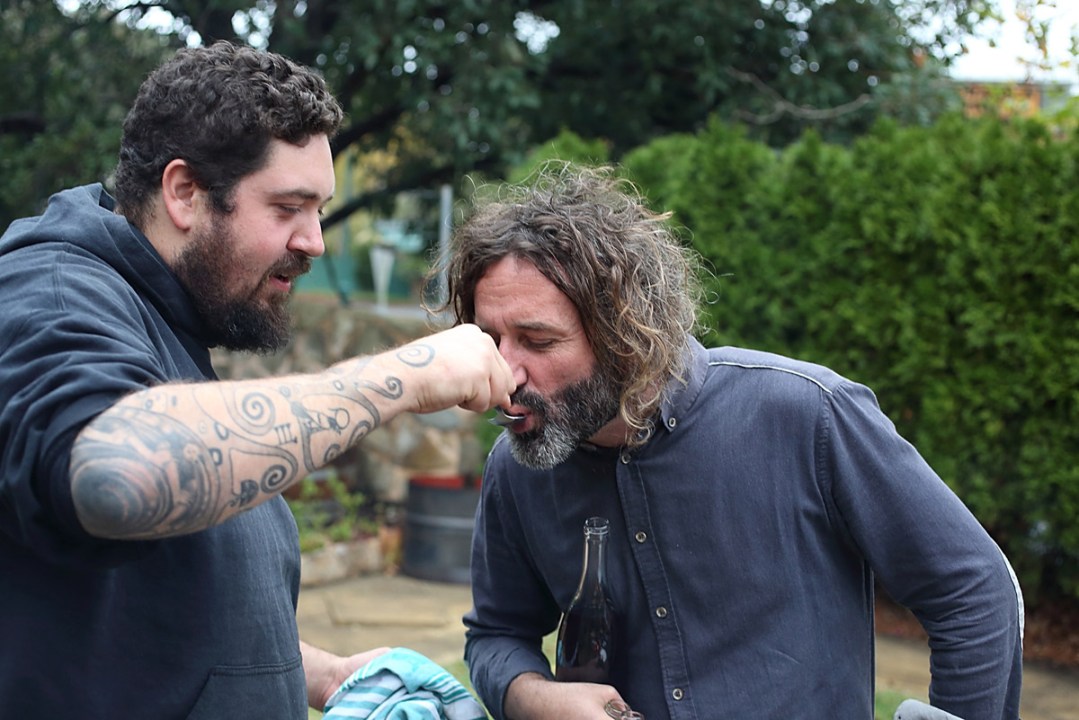 No, we weren’t away with the fairies – we were Lost in a Forest, which is the name Ochota has given to the wine bar and pizza restaurant he’s about to open in Uraidla (on June 3) with his wife Amber, in partnership with Regency College lecturer and chef Nick Filsell, and Charlie Lawrence, who owns the 1880s former church that now sports a bright green wood oven where the altar once stood.

There’s a long bar, a curious, boat-shaped mezzanine upstairs and a large wood heater in the corner. This will surely be the only pizza restaurant in Australia that has a bath in the toilet – cleanliness being next to godliness and all that.

In previous lives, following its conversion into a living space, the church was rented out – star chef Jock Zonfrillo, now a Summertown resident, once lived there for 18 months. 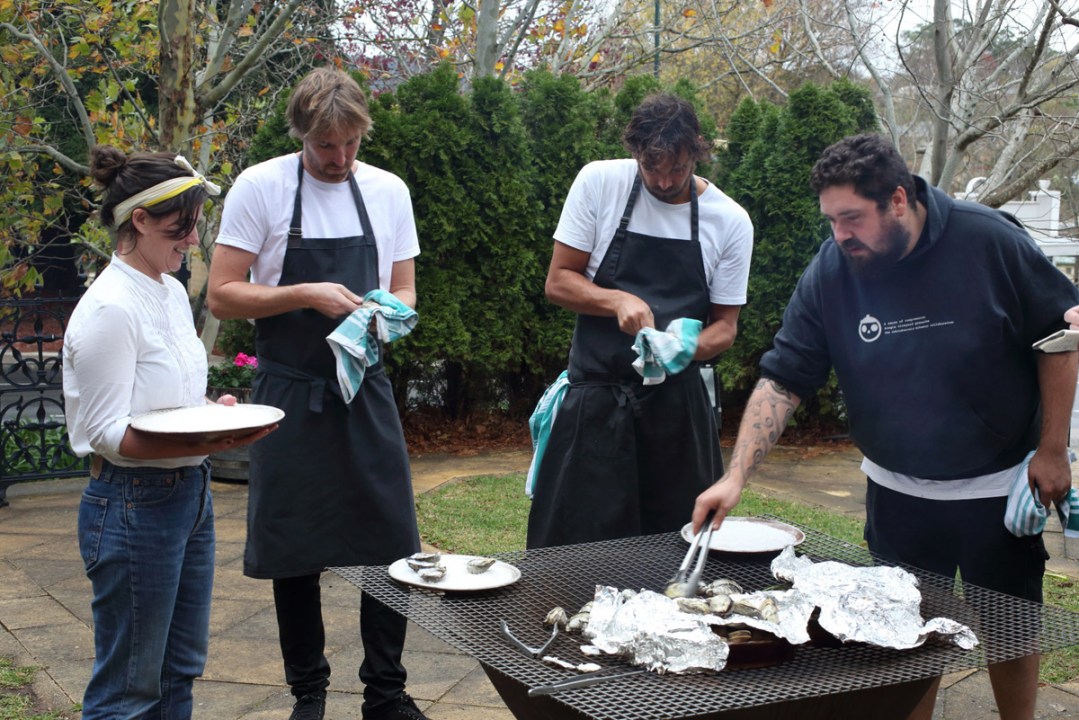 Welgemoed and Drobysz started proceedings with potfuls of pippies (with butter, sage, marjoram, chilli and garlic), along with snapper wings sloshed in chardonnay and fresh bay leaves, all charred over the fire pit out the front. Then came possibly the dish of the afternoon – fresh, unshucked oysters laid on the mesh “until they pop”, said Welgemoed. Then they were dressed with prawn oil and fermented blueberry juice. Even if you believe that oysters should taste just of the sea they came from, these were something else.

Firemaster Welgemoed, now back in his element in front of the wood oven, was giving the final touches to a 10kg shoulder of pork that he’d started cooking 24 hours earlier. Out the back on a barbecue, in the rain, the Blue Ducks were roasting dense slabs of ruby-red blood cake that would be served with the pork.

A whole lamb had been broken into various bits, each treated differently, and would appear later as a succession of dishes began. 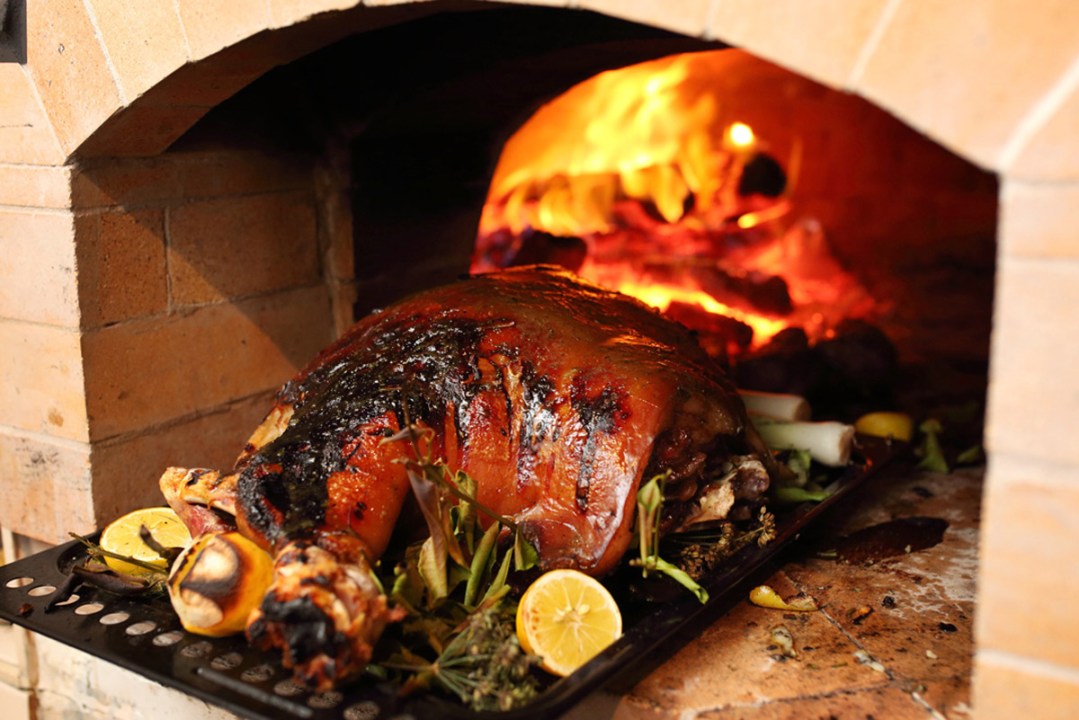 Morsels were passed around – shavings of pickled kohlrabi filled with slivers of just-picked slipper mushrooms and pine mushrooms, or foie gras pate with cognac, prunes and a scatter of toasted cashew nuts. Great chunks of coarse-textured, pastry-encased pâté en croûte sashayed past.

Platters started to arrive – buttered, roasted chestnuts with purple cabbage; caramelised, butter-roasted pumpkin; pickled pine mushrooms with slippery jacks; blackened brussels sprouts with roasted leeks and crab apples; lamb with charred leeks, shallots and pomegranate seeds; pork with morcilla (blood sausage), cabbage and kohlrabi; roast lamb with bitter greens. And so it went on – no menu, everyone ate on trust. This was a church after all. Faith was in order – and was well rewarded. 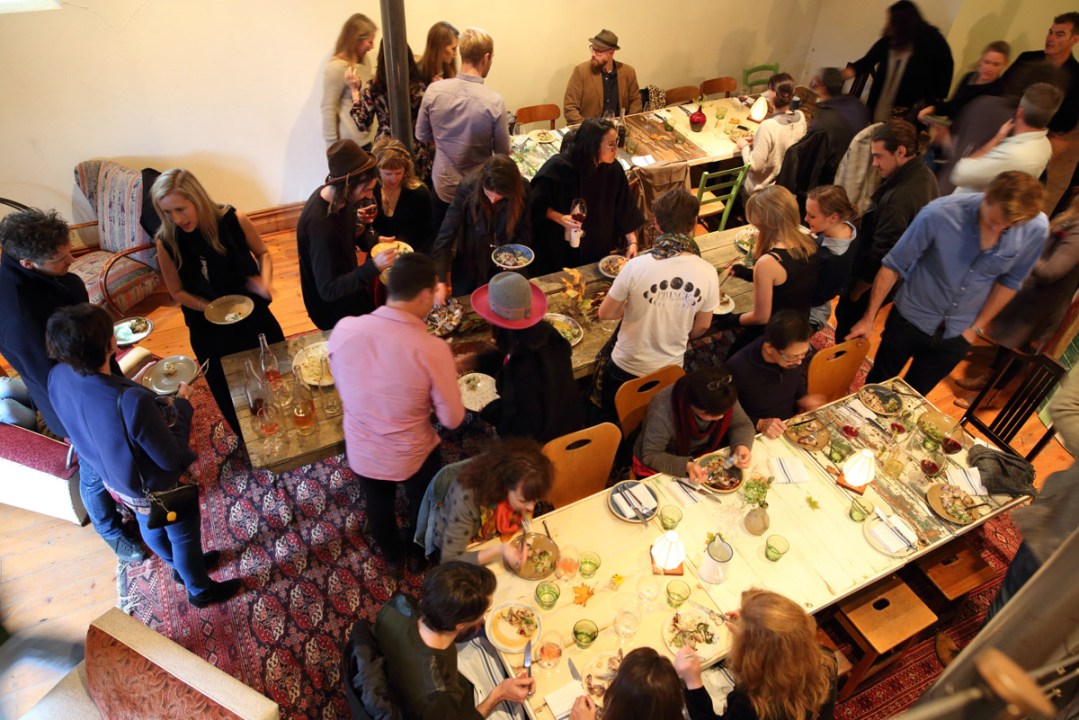 The dining room at Lost in a Forest. Photo: Tony Lewis

The final salvo arrived as platters of crème catalan with crushed poveron (a Spanish shortbread), sprinkled with caramel powder, and cubes of gooey chockmint marshmallows.

As Africola head chef Alex Drobysz, who survived five years working at the right hand of Gordon Ramsay, said: “It wasn’t such a big deal, really. We had four pretty capable chefs.”

Or, as one passionate young hospitality professional, who’d spent a quarter of his week’s wages to be there, commented: “This is really bleeding-edge stuff…but it’s also absolutely accessible.”

There were no sermons, but if one had been given it would have been all about extraordinary generosity, terrific invention and use of the products we have all around us, and this being yet another sign that something long overdue is happening up in “them thar hills”.

Right opposite Lost in a Forest is the Uraidla Hotel, now being given the special treatment by Ed and Julie Peter. In some circles, Ed is known as a high-flying fund manager and agri-investor. In the Hills, he and Julie are better known as the proprietors of the much-transformed Crafers Hotel – probably the only pub in Australia where you can drink a $5000 Bordeaux with your Crafers Burger. The Uraidla transformation has taken a bit longer than expected – looks like a spring opening. We can’t wait.

Just down the road at Summertown, in what used to be a pizza joint, a long-evolving café and cellar door is finally coming to fruition at the hands of two more Basket Range winemakers, Anton Van Klopper (Lucy Margaux) and Jasper Button (Commune of Buttons).

In a slightly cheeky nod to the past, they’ve called it the Summertown Aristologist, raising memories, for those who’ve been around long enough to have them, of the much-lauded Uraidla Aristologist run by Michael Symons and Jennifer Hillier in the 1980s. Again, look to a spring opening, natural wines from all over the world and a small menu featuring local produce – they still haven’t finalised a chef, so there’s an opportunity for someone.

Lost in a Forest will open Friday to Saturday, all day and conceivably all night if necessary. Wines from many of the Basket Range winemakers, and others, will be available, along with French and local Gamay, being Ochota’s favourite grape.