Before marketing companies saw the advantage of “Reserve” labels, making a “Reserve” wine was an old-school way of identifying great flavour and cellaring potential, says Rob Moody, one of the state’s doyens of winemaking.

During the winemaking process, he says, occasionally a winemaker will recognise that a wine is showing signs of superior character, so they set aside a few barrels for further nurturing.

If all goes well, these wines will ultimately go on to display superior complexity and ageing ability, commanding premium prices.

So when a reserve wine has been singled out by Moody himself, one of the winemakers behind the 1971 Penfold’s Grange (recently voted world’s best wine of the 1970s), you can be assured the reserve label is not a marketing strategy but a genuine assessment.

That is the story behind the 2012 Somerled Reserve Shiraz.

“During the initial barrel tastings back in 2012, I was so impressed that I was compelled to leave three barrels aside,” he explains.

“The barrel tastings from the Somerled 2012 Shiraz were so darn good that I wanted to see how they would mature, always knowing that at the end of the day if it didn’t come up to the mark that we could put them back into the bigger blend.

“That trio of barrels soon became so special that I kept them aside permanently, only bottling them a full year after the rest of the 2012 Somerled Shiraz.”

As a younger winemaker, Moody spent more than 30 years working for Penfolds, overseeing the red wines that would eventually make up the famous blends.

“I was involved in looking after the red fermentations at the time. I can still remember how fabulously dark and rich that wine was and feel glad that I can claim I had a nice little part in the initial creation of it.”

In 2001, the year Moody finished his tenure with Penfolds, he started making wine under his own label, Somerled.

Moody doesn’t own a vineyard or crush his own fruit; as a winemaker, he continues to work with ferments as he did at Penfolds.

Selecting young wines sourced from South Australian vineyards during or after fermentation, he uses his experience to blend and mature the carefully chosen barrels.

“When you look at a vineyard, it’s not easy to gauge how good the fruit is going to be and it’s likely to vary from year to year,” he says.

“It’s an unusual way to make wine, buying ferments and then spending so much time playing with the maturation, but it’s a bit of a luxury to be able to make the wine you want rather than the quality of the wine being dictated by a particular vineyard and season and the fruit it produces.

“Certainly, it’s part of my history in winemaking to be able to identify wines that are going to mature well. As one of the winemakers at Penfolds, it was my job to classify wines in the cellar that would go into their blends.”

By the light of the moon

The 2012 Somerled Reserve Shiraz is made from 100 per cent McLaren Vale Shiraz.

“We buy wines that have just finished fermenting, choosing the styles that I think are more appropriate to the Somerled style,” says Moody.

“The barrels I singled out for the 2012 Somerled Reserve Shiraz were much richer and fuller in flavour than the others, with very high but nice soft tannins – I really like that in a young red.”

While Moody has adhered to the same Shiraz winemaking philosophy throughout his career, placing emphasis on selecting very dark, concentrated fruit, he has also needed to innovate a little to achieve desired outcomes using more modern equipment.

In the old days, he says, the wine was able to achieve a lot of maturity and complexity due to the wooden bungs, or barrel caps, not fitting as securely as they do today, which allowed more breathing to take place. He compensates for this with an active winemaking style.

“Every three months I pump out the barrels, rinse them out, then pump the wine back in, top them up and then put the bungs back in,” he says.

“The reason I do that is that you get a little bit of air into the wine as it goes out and comes back in, which softens the tannins and also aids in the maturation process.” 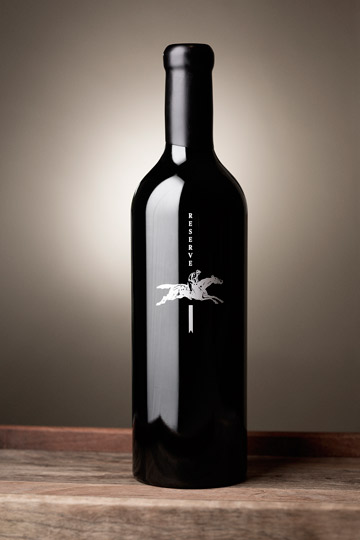 As the 2012 Reserve Shiraz kept improving throughout this process, it remained in French oak barrels for nearly three years.

“My principle is to have the wine really mature before it goes into bottle, where it will continue to mature as time goes on,” explains Moody.

“I love how complex the wine becomes over time, with lots of layers of flavour and aroma – I get a bit bored with plain fruit wines.”

Moody describes the 2012 Somerled Reserve Shiraz as “having it all – balance, integrated oak, maturity, complexity, richness, a full and warm middle palate and bottle-age aromas”.

He also produces a small range of red, white and sparkling wine for sale at his Hahndorf cellar door and via the Somerled wine club.