In this week’s column: a new cellar door for d’Arenberg, another heritage building turns to food and wine, how one good coffee became an obsession, beer with sass, and North Adelaide restaurants offer sidewalk service.

A large hole is being dug in the middle of a vineyard at d’Arenberg Wines in McLaren Vale to make way for a new five-storey wine centre, modelled on the Rubik’s Cube.

The $10.5 million design – which will encompass a new tasting room, three bars, a function space, offices, an additional restaurant to d’Arry’s Verandah and a dynamic viewing gallery – is the brainchild of flamboyant owner and winemaker Chester Osborn. 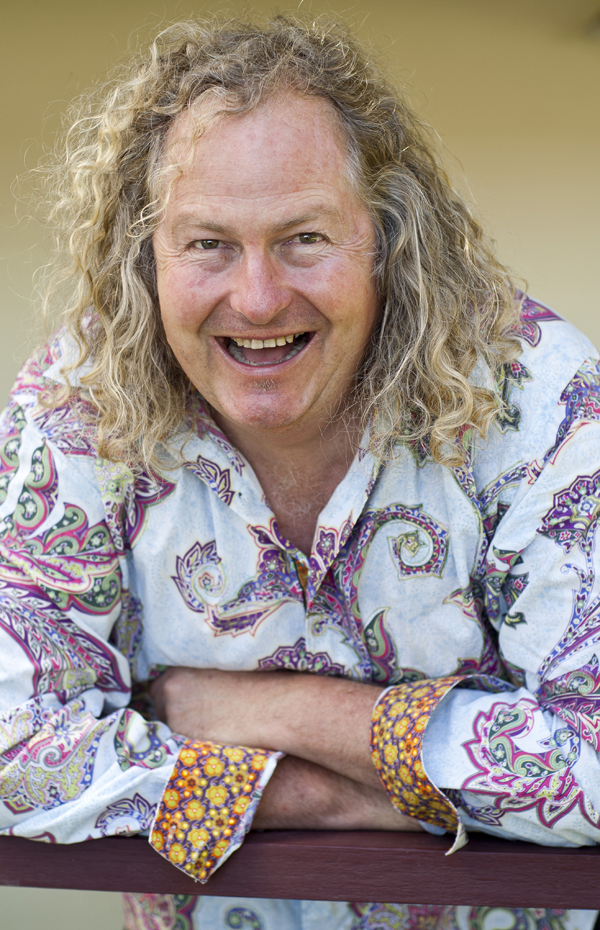 “I was going to build some heritage thing, but then I thought, ‘no, let’s go really modern, let’s do a Rubik’s Cube with colours on the outside’,” Osborn says. “But the board didn’t like that, so I presented them with a 4×4 model with an intricate multi-changing pattern on the outside.

“I also turned the top two floors and pulled out blocks – one block will look like it’s fallen out into the car park, which will be the bore shed – it’s more challenging than a Rubik’s Cube.”

The bottom storey of the new building will be clad in mirror glass and set back one and half metres from the four storeys above, giving the impression that there is a cube floating on top of the vines.

“The engineers say it’s the most complicated design they have ever worked on, but the council took a fair while to come around.”

Osborn anticipates the large number of international visitors and wine trade will continue to increase, making the investment worthwhile.

“There are 40 restaurants already in McLaren Vale, so what’s another?” he says. “d’Arry’s has been full for 11 years and, with the Southern Expressway making the region more accessible, there is a demand for more and more dining.

“The building will be a piece of art – everywhere you look there will be something going on that’s wild and different.”

Osborn hopes the building will be completed by the end of 2016 and has installed a time-lapse camera to document the construction process. You can watch the progress here. Or for a real-life glimpse of the action at d’Arenberg, book in for a vintage tour and tasting that will take you from the winery to the vineyards.

New life for an old house

After 20 years of neglect, historic Electra House on King William Street has had a $10 million makeover to create a ground-floor bar, a modern Greek restaurant (“Olea”) on level one, and two function spaces on level three. 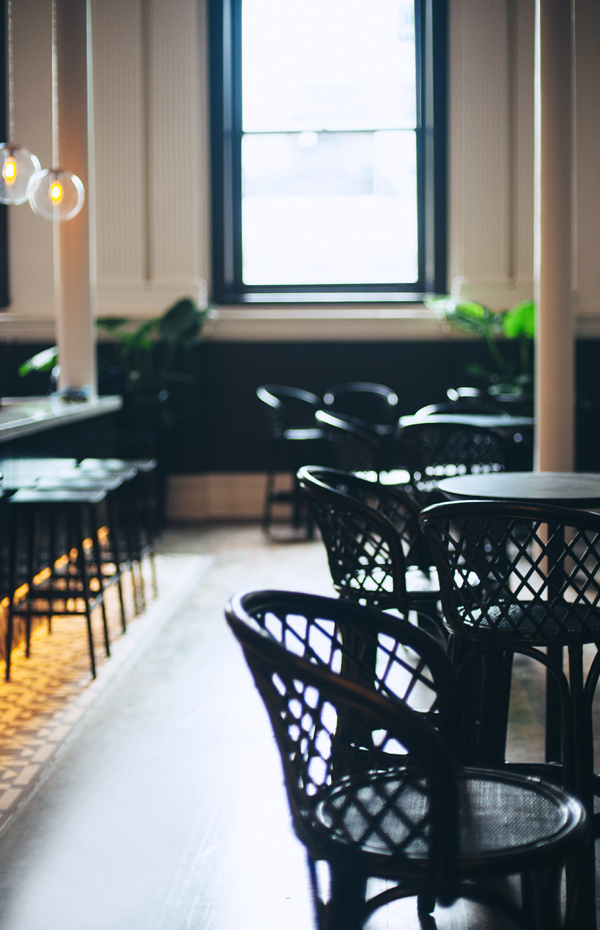 Electra House was built in 1901 by the Citizens’ Life Assurance Company and features 6m-high moulded ceilings and Corinthian pillars.

Designer Danielle Elia says the grand scale of the building bucks the trend of boutique, small-licence and pop-up bars across the CBD. She describes the refurbishment as “LA glam meets Hamptons-style charm inspired by the Art Deco era”. 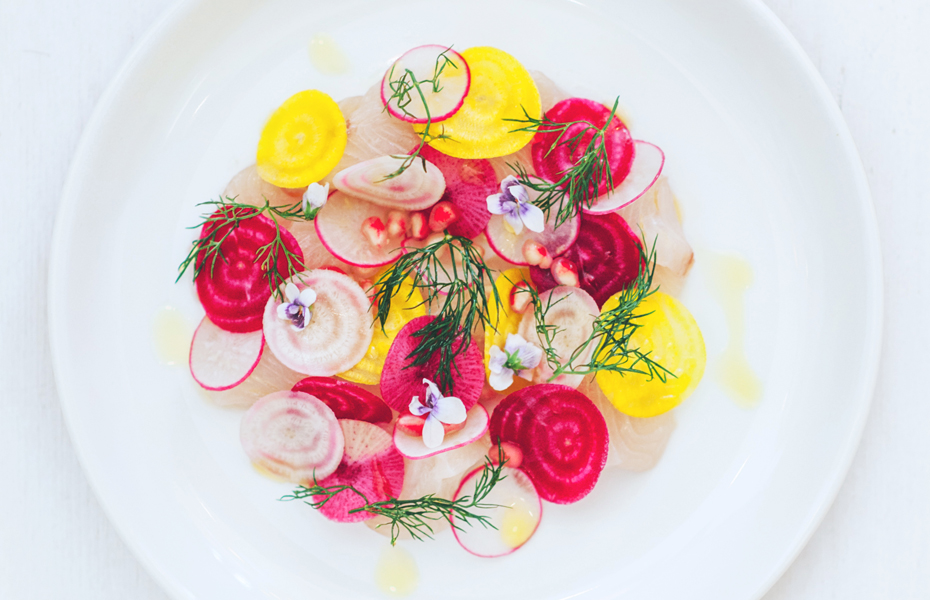 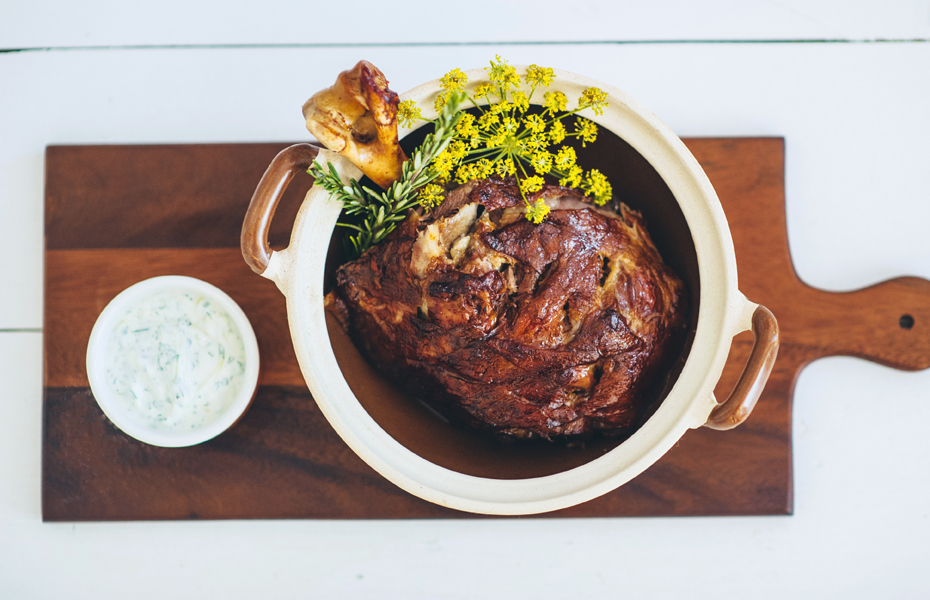 “We will feature dishes inspired by my Spanish roots, like tapas, together with American and Greek influences, to ensure a fusion of cultures,” Ales says.

Dining out at WOMADelaide 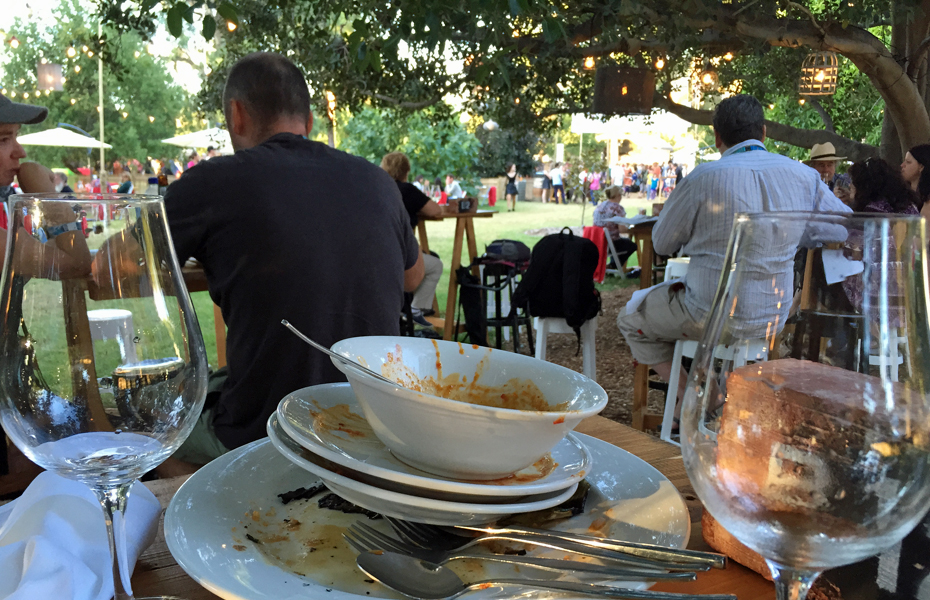 Satisfaction at WOMADelaide’s Street in the Park. Photo supplied

On Monday evening, on a whim, we strolled into the calming surrounds of Street in the Park, just removed enough from the hubbub of the Zoo stage to be relaxing but still feel part of the wonderful WOMADelaide vibe.

Smiling staff greeted us at the bar and we decided to grab a bite to eat along with the drink we had originally planned on.

We ordered from a set menu (all items $25), choosing the ‘Congo’ Liboke de Poisson (fish in banana leaf) and the ‘Korea’ Tteokbokki (a ‘healing’ bowl of pork balls in a red chilli sauce with rice cake).

There was an attractive selection of wines on offer by the glass (mostly around $10). We chose the Heggies Chardonnay and took our chilled glasses (yes, real glasses!) to a wooden high table nestled under one of the many mature trees within the bar and restaurant area.

The food was delivered within minutes, complete with white linen napkins and real cutlery and crockery. It was utterly delicious with the fish kept moist by the banana leaf wrap, subtly flavoured and easy to share. The rice cake, which resembled long, thin gnocchi, was swimming in a just-spicy-enough sauce with four large, tasty pork meatballs.

From our table on high stool, we had an uninterrupted view of both Gotye on stage and Jock Zonfrillo in the kitchen, so another glass of wine was obligatory. 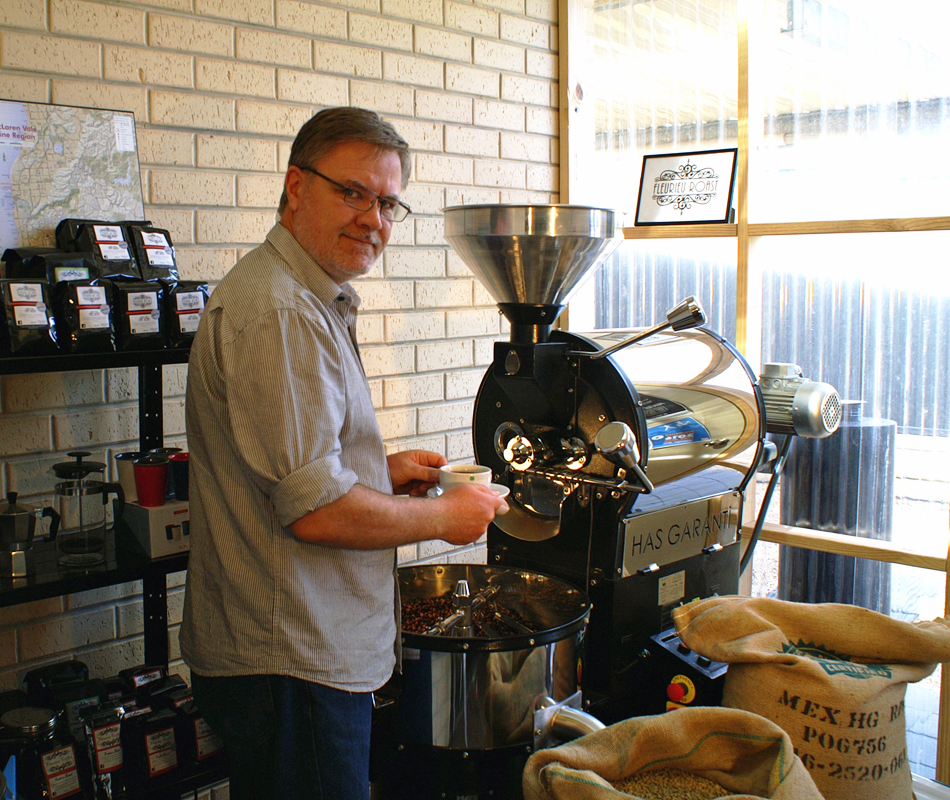 Among the growing number of boutique coffee roasters, there are some backyard enthusiasts who are getting serious with their hobby.

Fleurieu Roast Coffee’s Ben Tugwell, whose day job is a safety advisor, took his home-roasted beans to the Sydney Fine Food Show coffee competition and came back with a silver medal in the espresso category.

“The espresso category had 100 entrants and I came third overall,” says Tugwell.

“I also entered the cappuccino class and came 12th out of approximately 200 entrants.”

Tugwell, who lives in McLaren Flat, says his interest in coffee began 20 years ago with a cup of coffee he had at the Grand Hotel in Glenelg. “It was like nothing I’d ever tasted before – strong and velvety smooth, almost like drinking chocolate. I found out later that that experience is universally described as ‘a god shot’ and it’s the holy grail of coffee.”

Since that day Tugwell has been dabbling. He started by trying out different machines and driving all over Adelaide to get the best beans. “Then I thought, ‘I can do this myself’, and four years ago I started roasting my own beans at home.”

He began sourcing beans from Columbia, Brazil, Ethiopia, Panama and Mexico through interstate brokers, buying by the pallet and investing thousands of dollars at a time, then sharing the results of his experiments with friends.

“But eventually I wanted to know how my coffee rated on the broader scale, so decided to go commercial and enter Sydney Fine Food. One of the conditions of entry is that your product is commercially available.”

Small batches of Tugwell’s beans are available via his Facebook page.

Tugwell describes the Café Blend, which won a silver in the espresso class, as a bold coffee that is for traditional coffee drinkers who want a consistent coffee. The Festive Blend, which won a bronze medal, is more chocolatey and fruity.

Harris says they have a small bar and kitchen on site where you can taste their brews and enjoy “food that goes with beer”. 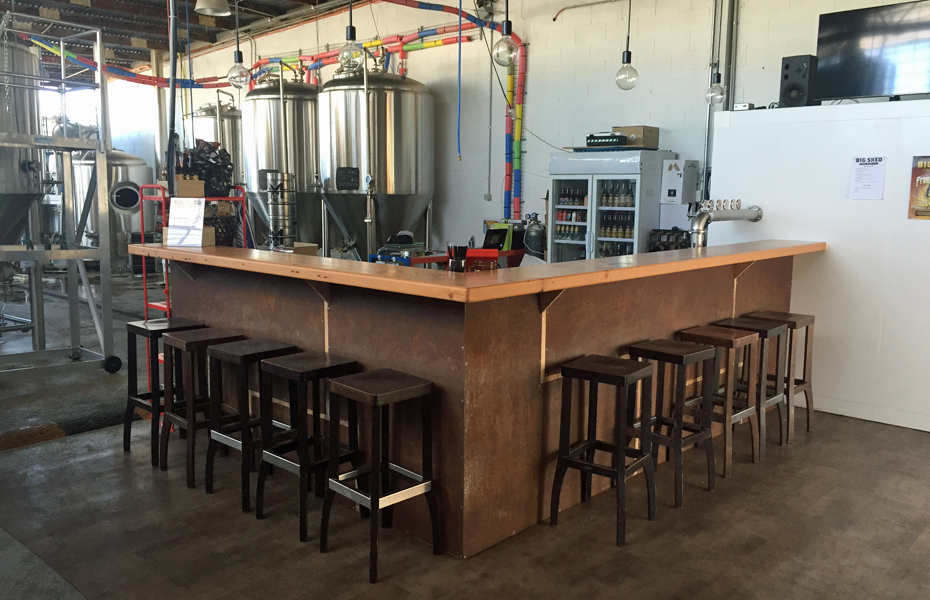 The pair has been “underground” for the past five months, letting the business “grow organically”, but they have been brewing for just over 14 months.

Harris says Big Shed Brewing will generally have six or seven styles available for tasting, including four regulars – an American Pale Ale (FYeah), a brown ale (Frankenbrown), a West Coast IPA (Californicator) and a kolsch (LLKolsch-J) – as well as “pop-ups” which currently include a Szechuan peppercorn Ale, an apple and cherry cider, and an English-style ale (Sir Prince Philip Pale “just to piss off Tony Abbott”).

Big Shed Brewing is open on Fridays from 2pm and on Saturday from midday.

Another new label, Malt Fiction – not to be confused with beer blogs, beer festivals and other beer musings of the same name – has also been launched in Adelaide, making the city not just a food and wine destination, but now a place to visit for beer indulgence, too.

Established by Jaren Birbeck, Peter Lynn and Antony Tropeano, Malt Fiction’s first release is a pale ale called “13”, with the label featuring a provocative silhouette of a woman sipping on a bottle of beer.

Also recently launched in Adelaide during Clipsal was Penthouse Magazine’s own racy brand of wines and spirits. The Penthouse Wines are made in the Adelaide Hills and in California by an unnamed winery, and the range includes a sparkling Shiraz called “The Scarlett” and a sparkling white called “The Blonde”. The Penthouse spirits range is made in the US and has kept to the same theme, with a cherry-flavoured vodka named “Libido Libations for Her and Him”.

Street Eat in North Adelaide – Sunday, March 15, 12pm to 2pm
North Adelaide dining strips O’Connell Street and Melbourne Street have been innovative in bringing their restaurants to the streets before and after games at Adelaide Oval.

This Sunday’s #STREETEATNTHADL will be happening before the Cricket World Cup Pakistan v Ireland game, between 12pm and 2pm.

Meet your friends and try some of the participating restaurants’ signature dishes on the street. More information can be found here.