When Lymn says he’s “a bit unconventional”, he’s referring to the fact he learnt to cook not through a TAFE course or traditional apprenticeship, but on the job and by  travelling.

He actually studied visual arts, including photography, at the University of South Australia and initially started working in kitchens to pay for his study. Instead of pursuing an arts career, he went on to hone his chef skills in restaurants in Adelaide and overseas.

“I’ve had to open myself up to listen to everyone around me… I’ve really enjoyed the way it’s evolved,” he says.

“And I’m always open to new experiences and learning about different cooking techniques and flavours… I don’t feel constrained by any rules.”

Lymn previously worked under former head chef Dan Lawrence at 2KW Bar and Restaurant, and after a six-month break he recently returned to take up the role of executive chef.

The 2KW winter menu includes new dishes that reflect his experience and interest in both native Australian ingredients and Latin American flavours. He is also working on building more direct relationships with SA growers and producers, and finding fresh ways to showcase their produce in restaurant dishes and at special events.

A strong influence on Lymn’s style of cooking was British chef David Eyre, a pioneer of the gastropub scene, whose Eyre Brothers Restaurant he worked for in London. Although he was hired as restaurant manager, the Australian also did shifts in the kitchen, which produces traditional Spanish and Portuguese cuisine.

“My idea, and it’s never really changed, was that there should be no boundaries between the kitchen and the floor – that they should always intermix…

“David’s cooking was quite full-on rustic – lots of olive oil, lots of garlic, and bold flavours.”

While in London, Lymn met his Argentinian wife, Cecilia, also a chef. In search of warmer climes, the pair decided to move to either Australia or Argentina.

“Because of my thirst for travelling and knowledge, I thought let’s go to Argentina,” he says.

“We opened a small lunchtime restaurant/café. We did very organic, natural produce – a lot of our food was directly supplied from the growers and producers, and we’d make the dishes from that.”

A selection of 2KW winter mains, including the shio koji chicken.

Lymn, who returned to Adelaide with his family a couple of years ago, says one of the desserts on his new 2KW menu – the Poteno’s Breakfast – is inspired by his image of a porteno (a Buenos Aires local) eating the classic Argentine biscuit alfajores while smoking a cigar and enjoying a coffee, with a shot of rum on the side. The dessert combines the alfajores with a coffee crumb, tobacco-infused cream and a dulce de leche mousse with rum.

“It’s my cheeky idea of a city person’s breakfast … it’s a really good dessert that shows my influences and how I work through dishes.”

Another of the new 2KW desserts, the Native Parfait, sees him put a sweet twist on Mexican mole, a rich sauce made with chocolate, spices and chilli and traditionally served with chicken. Lymn’s parfait also includes native Australian ingredients such as strawberry gum, macadamias, and sandalwood kernels.

“I basically rearranged the whole recipe to make it a native mole and then made it into a parfait. It does have a little bit of heat with some guajillo and pasilla chillies from Mexico.”

He is also interested in fermentation, and a new mains dish is the Lenswood Apple Pasture Shio Koji Chicken with Miso Tahini and Crispy Skin – the chicken is marinated in the shio koji (a fermented seasoning) and then cooked in the kitchen’s Josper (Spanish wood oven), resulting in what he describes as a “salty, umami effect”. 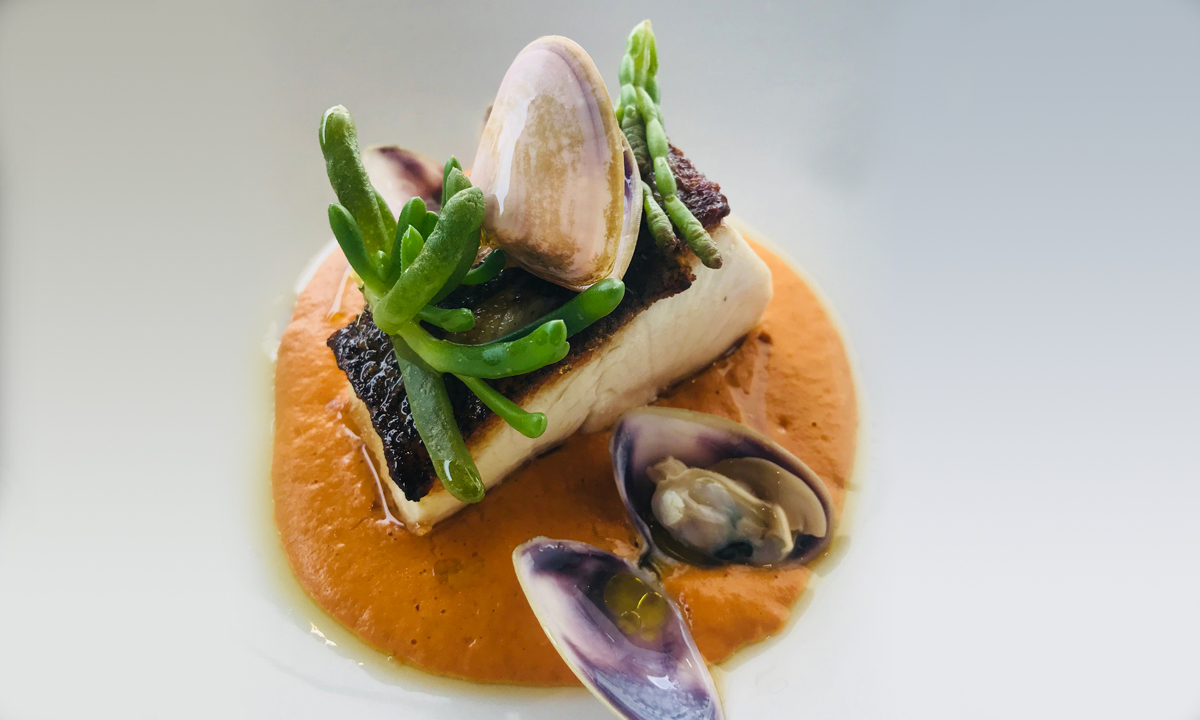 Lymn believes that the passion of producers has a direct influence on food. He plans to add a page to the 2KW menu that will change on a weekly or fortnight basis and feature dishes created around seasonal ingredients brought in by producers and farmers who share the restaurant’s sustainability ideals and with whom the chefs have a direct relationship.

“It’s a way of keeping the chefs’ creativity and being true to what’s in season,” he says.

“I’m trying to create a creative hub in the kitchen by encouraging all the chefs to be more creative.”

Speaking of creativity, Lymn hasn’t let his art studies go to waste: he says he gets to exercise his artistic flair through plating, and also food photography.

“I’ve always been interested in photography … sometimes I wonder if I became a chef so I could take photos of food.”