This was supposed to be a story about Andy Clappis, McLaren Vale baker, but along the way it was hijacked by his father, Enzo, one of the pioneers of early Italian dining in South Australia.

You’d expect visitors to McLaren Vale to go home enthusing about the wines they’d tasted, but an awful lot of them remember the bread they’ve eaten in the region’s wineries and restaurants. That would be Andy Clappis’ artisan style, homemade bread.

It’s symptomatic of a broader truth: the Barossa got the Germans, McLaren Vale got the Italians, and the extended Clappis family exemplifies the influence Italians have had on the collective culture of the region.

The Clappis’ weren’t by any means among the earliest Italians attracted to McLaren Vale, and there’s a long list of those, but anyone who’s experienced one of Andy and Enzo’s Our Place Sunday lunches up on Willunga Hill has had a thoroughly authentic taste of what a large, in fact very large, Italian family lunch is all about.

But the story starts with Enzo, now 85 and still in the kitchen every day, and his wife Sonia. Both were refugees escaping post-war communism in Yugoslavia as part of what was called the Istrian exodus, when around 350,000 Italians left Slovenian Istria. The couple met on the boat bringing them to Australia in 1951. 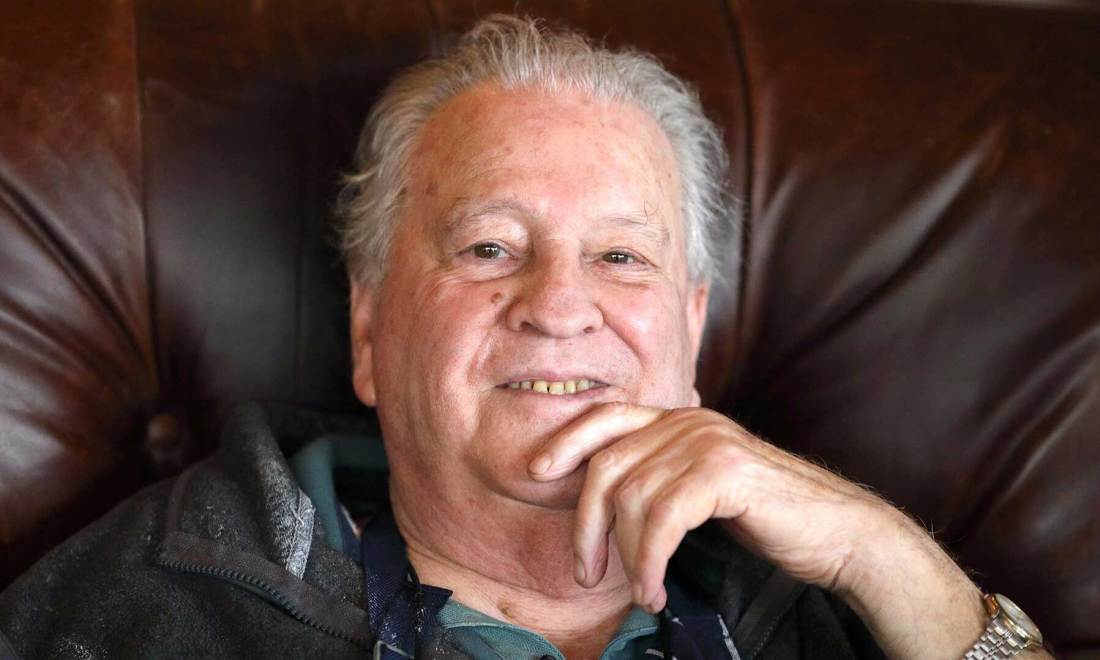 While a refugee in Italy, Enzo had worked in kitchens in Brescia, northern Italy, but the deal then for refugees was that they worked wherever the government wanted them to work, usually in factories – as did Enzo, although at one point he found himself in Whyalla as a night cart operator – quite literally a shit of a job.

Initially it was helping Emma Floreani, who ran a boarding house in Hurtle Square for 35 single migrant men just like Enzo. Bravely, he put a few tables and chairs on the front verandah and welcomed all-comers: “We have to teach people to eat Italian,” Emma had told him.

Enzo bought his meat from Luigi Caon, a butcher and father of Primo and Giocondo, who went on to become very significant restaurateurs in their own right. But it was when he put calamari on the menu that all his Anglo customers disappeared. He’d been feeding them steak and chips, in 1951 this was asking too much.

Olive oil also posed a problem. In search of coffee he’d been sent to Birks Chemist in what is now Rundle Mall: “I cried when I read the label,” Enzo says. It was chicory essence. But he returned again in search of olive oil.

Sure, they had olive oil – in tiny little bottles produced by Faulding: “The colour looked great, not like the coffee, so I asked for three dozen bottles,” Enzo recalls. “The chemist suggested I really should go and see a doctor, as this was what they used as a laxative.”

As he tried to explain, in his not very good English, that it was for a salad, he heard the chemist’s wife, who’d been listening, mutter “Bloody wogs.” It was not an easy time to be an Italian in Australia: squid, olive oil, wog food.

By the early 1960s he was helping Mario Fontana at Chef Fontana, where Buonosera Restaurant is now on Glen Osmond Road. Mario had a difficult relationship with his wife, who eventually killed him by pouring boiling oil on him, and in 1966 Enzo, in partnership with then travel agent Ilario Lamberto, bought the business and renamed it Buonosera.

It was so popular that when the Cohen family opened Burnside Village they lured Enzo across in 1970 to open his own eponymous restaurant, Enzo’s. Buonosera was subsequently sold to Ilario Nesci, who continues to run it very successfully.

Enzo believes he was the first restaurant owner in South Australia to promote outside dining, which he did at Burnside Village. “Hardly anyone would sit there,” he says, “except for (then Premier) Don Dunstan and his partner Adele Koh. He’d sit there even if it was raining, with an umbrella.”

But Enzo also had his eye on a grander property at the foot of Norwood Parade, at that time an art gallery. He eventually bought the property in 1976, the same year he sent Andy, then aged 17, to upgrade his hospitality skills in Switzerland. As a junior in a Gstaad hotel, Andy would serve fondue or debone a quail for the likes of Elizabeth Taylor, Audrey Hepburn and David Niven.

Enzo had planned a fine diner, hence Andy’s spell overseas, but when he opened Enzo’s in Kent Town in 1980 he settled for a more homely and familiar style of Italian cooking. The fine dining had to wait two years when the property was sold to Nick Papazahariakis, who opened it as Chloe’s, such is the intertwined and almost incestuous nature of Adelaide’s restaurant scene.

After a spell selling upmarket kitchenware, Enzo and Sonia bought the Maylands Hotel in 1987, which they held for 14 years and is where many Adelaide diners first came across Sonia’s fabulous, homely Veneto-style cooking. It was there that Andy began teaching himself how to bake bread. 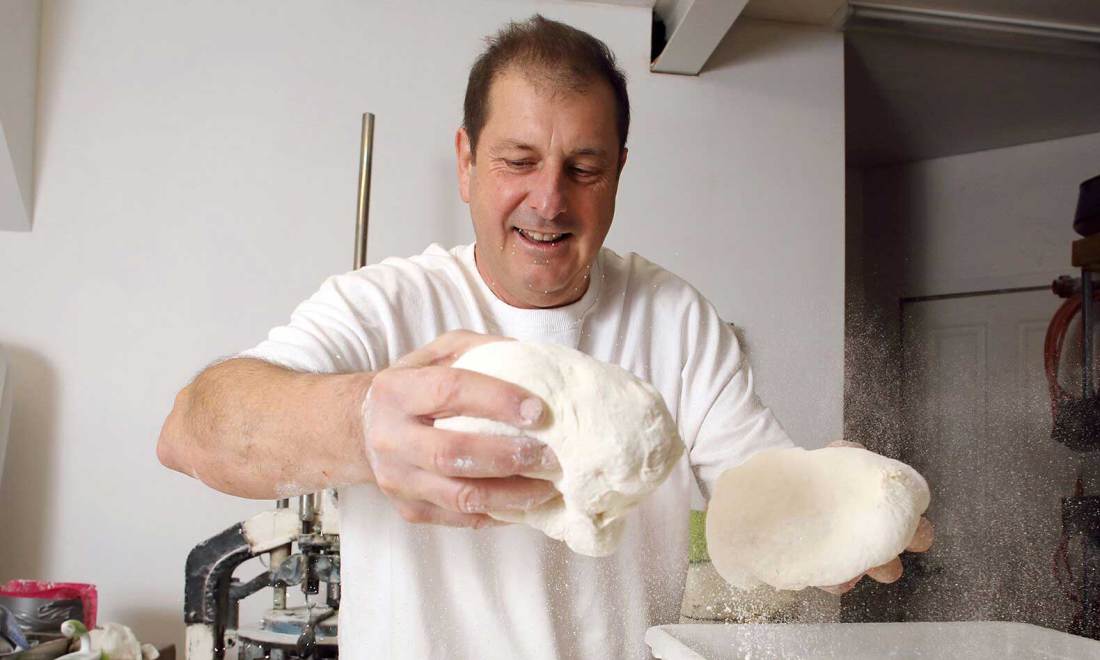 “Everyone thought we were mad but the price was good and I knew what I was going to do,” Enzo says.

“We introduced restaurant food at pub prices and we were the first pub in Australia to have an espresso machine in the front bar. We gave Andy’s bread away, with butter not margarine, and everyone said our customers would have no room for food, but you’d be surprised by how much they drank.

“There’s an old saying that you have to give in order to receive.”

Under pressure to install pokies, which they resisted, Enzo sold the Maylands in 2000. Along the way, in 1994 the family had bought a substantial landholding on Willunga Hill with the intention of raising cattle, and where Andy had since made his home.

It was an invitation in 2003 to cook lunch for the local McLaren Vale Bacchus Club that proved transformational. 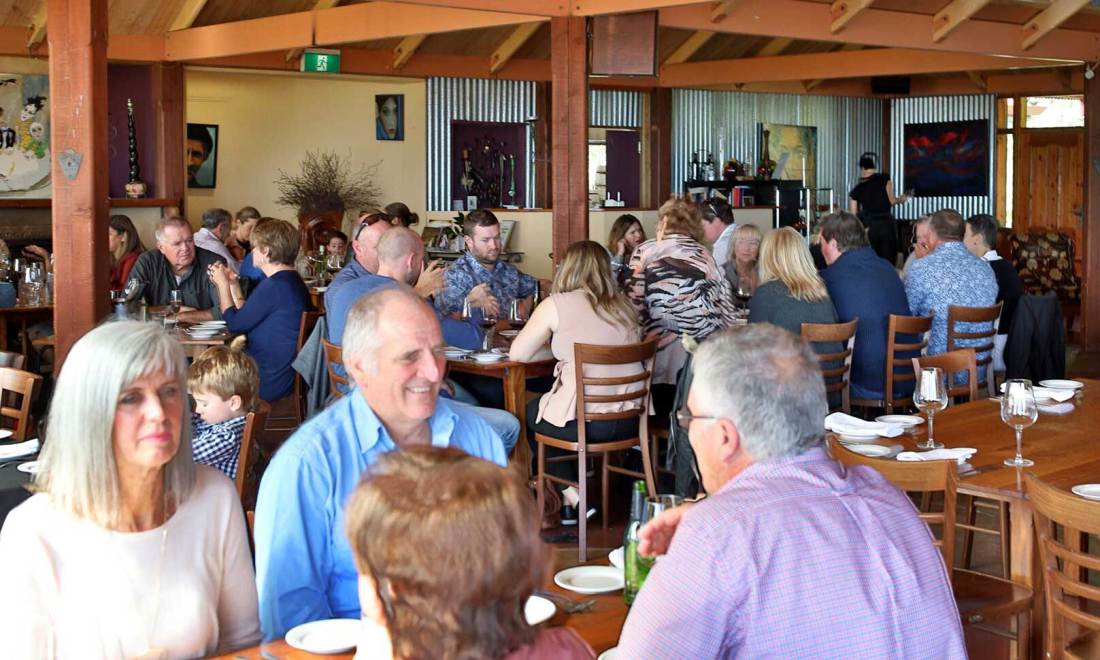 “We had nothing here,” Andy says. “No kitchen, just sheds with heaters under the tables. But it was a great success. And it just went on from there.”

Andy installed a commercial kitchen in 2007 and started making bread for local wineries and restaurants: “It just grew and grew, it’s still growing,” he says, reeling off customers such as The Star of Greece and Victory Hotel, and a string of major wineries. It has been sold at local providore Minko, which is closing, but will now be available at the Willunga General Store.

His staple loaf is a long and flat, longer than a traditional ciabatta.

“It’s just a simple pane casalinga,” he says, which he calls a “Fino”.

Although not a true sourdough, it is still based on a sourdough starter Andy started more than 30 years ago. He uses Laucke’s Wallaby baker’s flour – at least half a tonne a week – fresh compressed yeast, rainwater and just one secret ingredient – unrefined golden salt from the River Murray.

Crusty and tearable, and totally delicious when served warm, it’s a staple component of his Sunday lunches for up to 120 guests. These are genial, generous and gentle events graced with much good humor and a menu that goes on and on. No wonder this is a place where Italian men bring their mothers, confident they’ll eat much more than they ever expected. 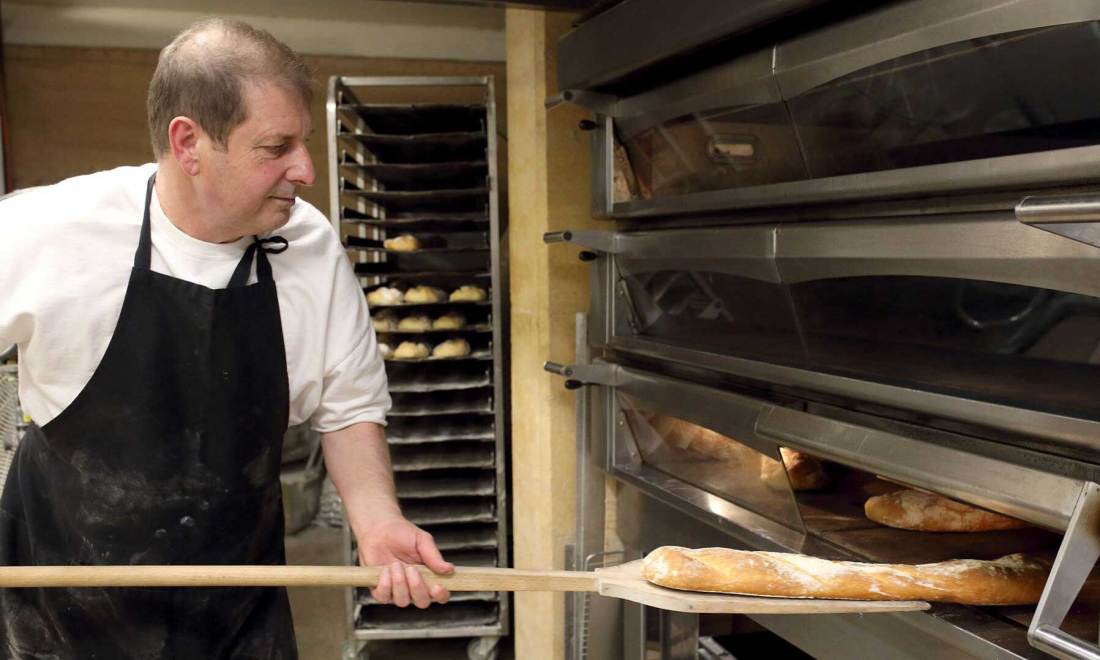 The beef, lamb, goat, eggs, chillies and herbs all come from the Clappis farm. Much of the wine that is consumed comes from Andy’s celebrated cousin, the winemaker Walter Clappis and his The Hedonist label.

Thin slices of baked chick pea flour – la farinata – are passed around, salty and crisp, quickly followed by squares of pizza margherita and bowls of baccala paste to go with Andy’s bread, hot from the oven, served with Nangkita olive oil. But not just any old baccala paste is used. This is a recipe given to Sonia in Italy by famed Italian Formula One racing driver Tazio Nuvolari, for whom she once worked while a refugee in Italy.

Then a salad to lighten up: tomato and basil (both “from an Italian guy down the road”) with fennel and mozzarella, followed by prosciutto and salami made by a mate, also great with the bread.

By now most guests are experiencing a sense of alarm. They’ve already eaten too much… and there’s more. Ah, it’s just a plate of lightly floured and fried, ever so tender, calamari. No problem. Except that now there’s also a platter of risotto with radicchio and fresh chilli and another of fat gnocchi with almond and basil pesto. 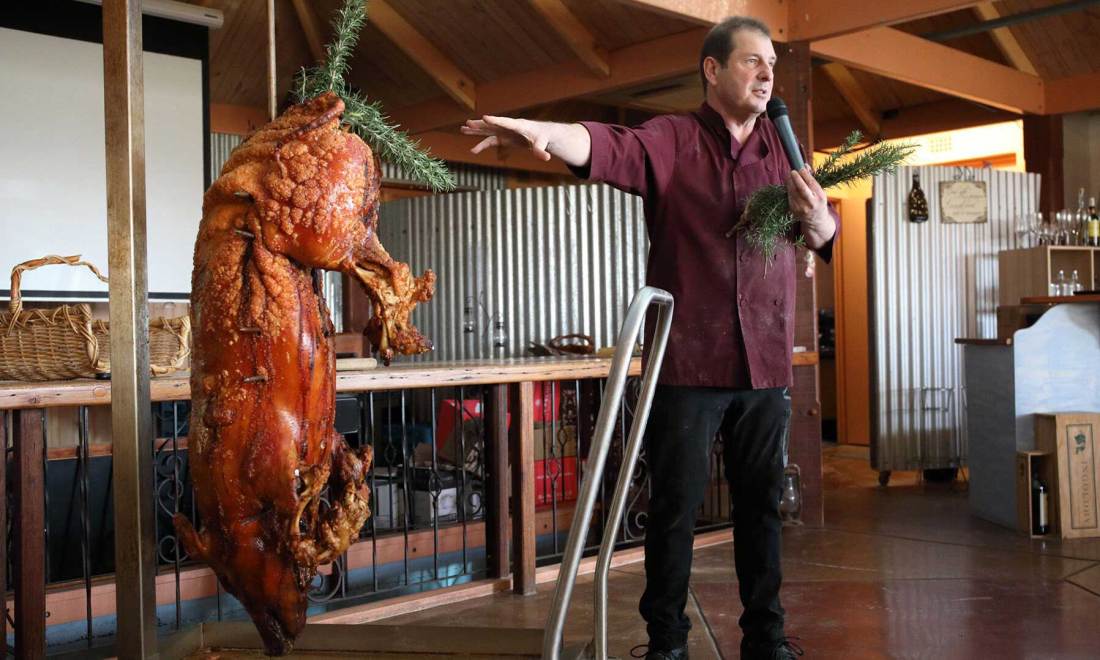 And then there’s the pig, a 34kg grass-fed Berkshire pig cooked upright on a stand in Andy’s big oven and wheeled out for all to admire. Andy says its crisp skin is now like rice paper, its meat like butter. And it is. It comes with a platter of roast potatoes, carrots, red capsicums and steamed broccolini, but by now no one cares. Except that now a plate of crisp, fresh cannoli Siciliana appears, and suddenly everyone cares.

Some years ago, after the local Ferrari club had had its fourth annual lunch there, a comment was left in the guest book: “This is proof that God must be Italian.” Who could argue with that?