Jolleys Boathouse is another of those Adelaide restaurants that have quietly, unassumingly clocked up 30 years, some of them distinguished, some less so, currently very much the former.

But Jolleys has more of a story than most because its roots extend back into the very formative days of our current restaurant scene a decade earlier when, in fact, we didn’t have many restaurants at all.

In 1968 Adelaide could count only 22 licensed restaurants – the oldest of them being the Quality Inn, which had started in 1897. By 1977 the city had just under 200 licensed restaurants, but few of them would have rated a mention by today’s standards.

We had the Chesser Cellars, started in 1964; the Magic Flute and one or two other upmarket establishments such as Derek Jolly’s Decca’s in Melbourne Street. By the late 1970s there were places such as Benjamins, where hospitality icon Peter Jarmer was chef, and the tiny French restaurant Le Paris, facing the Buckingham Arms Hotel in North Adelaide, run by another restaurant icon, Nick Papazahariakis.

Not far away, in a condemned house in North Adelaide’s Palmer Place, another very informal but rather special “home dining” restaurant was winning high praise – Belinda’s Restaurant, run by Belinda Hannaford. It had just one table, seating 12 guests.

It wasn’t quite what Belinda had anticipated doing with her life. The daughter of Sir James Holden, the manager of General Motors Holden’s Woodville car body manufacturing plant, she’d grown up in a mansion surrounded by servants and 4ha of gardens in Robe Terrace. She’d gone on to marry young architect and star Port Adelaide ruckman Ian Hannaford, but by the late 1970s the marriage had ended and she had no idea what to do.

Enter another restaurant icon, Ron Tremaine, then managing The Lion Hotel, who would later bring fine dining to Ayers House. He persuaded Belinda to open a home restaurant, provided all the required crockery and glasses from The Lion and invited the first 12 guests. That was in 1977 and within a year national wine identity Len Evans wrote about a “tiny restaurant that serves only one table. The food is so good, quite the best I’ve had in Adelaide.”

Very soon another notable Adelaide chef, Cath Kerry, called Belinda to ask how she’d done it, and then started her own home restaurant in Carrington Street.

There were a few licensing issues, of course, and when the City Council closed down Belinda’s she worked for a while with Tremaine, by now at Ayers House, until one day when walking home across City Bridge with her mother, Lady Prue, she looked down at the tumbledown boatshed and the paddleboats in front of it, then operated by Keith Altman, who also operated the Popeye river boats.

This is where Adelaide began, by the water

Altman had knocked back many offers to take over his council-owned lease, but he was persuaded by Belinda’s plans to fix up the kiosk and sold her the one year remaining on it. The following year, 1987, she negotiated a longer lease from the council and after some basic renovations Jolleys Boathouse was born, albeit still very primitive, still selling ice-cream and hotdogs from the kiosk and just a simple domestic kitchen out the back.

Somehow, using all her eccentric magic (and there is heaps of that), with her mother helping out and a crew of street kids waiting on tables or helping in the kitchen, it worked.

In 1988 Adelaide restaurant reviewer Tony Baker (Sol Simeon in The Sunday Mail) raved about the cooking, having paid $36 for lunch for two that included Thai seafood salad antipasta and tomato cups filled with fresh basil and mozzarella (spelt motzarella – Belinda was dyslexic and not good with spelling), with artichoke on a bed of bacon and spinach.

Other dishes on that menu included smoked chicken and duck terrine with pink peppercorns and a port, orange and ginger sauce; prawn, herb and vermouth omelette; whiting Veronique with grapes and a light cream sauce; and marinated chicken skewers with almonds and aromatic Basmati and wild rice. Two courses for $17.

The number of seats rose from 30 to 120 when the front deck was built, and after five years Belinda and her mother were burnt out. They cut a deal with Ian Hannaford and his fellow architect and business partner Barry Matthews, then retreated to the family property on Kangaroo Island where Belinda went on to create more legendary dining spaces at Snellings Beach – notably the extraordinary magical Fig Tree where daughter Rachel now holds court.

Matthews says he never saw himself as a restaurateur. He’d put himself through university playing in an early rock band (it was the era of Bill Haley & His Comets, Little Richard and Buddy Holly), and says he was simply fascinated by the location of Jolleys: “This is where Adelaide began, by the water.” 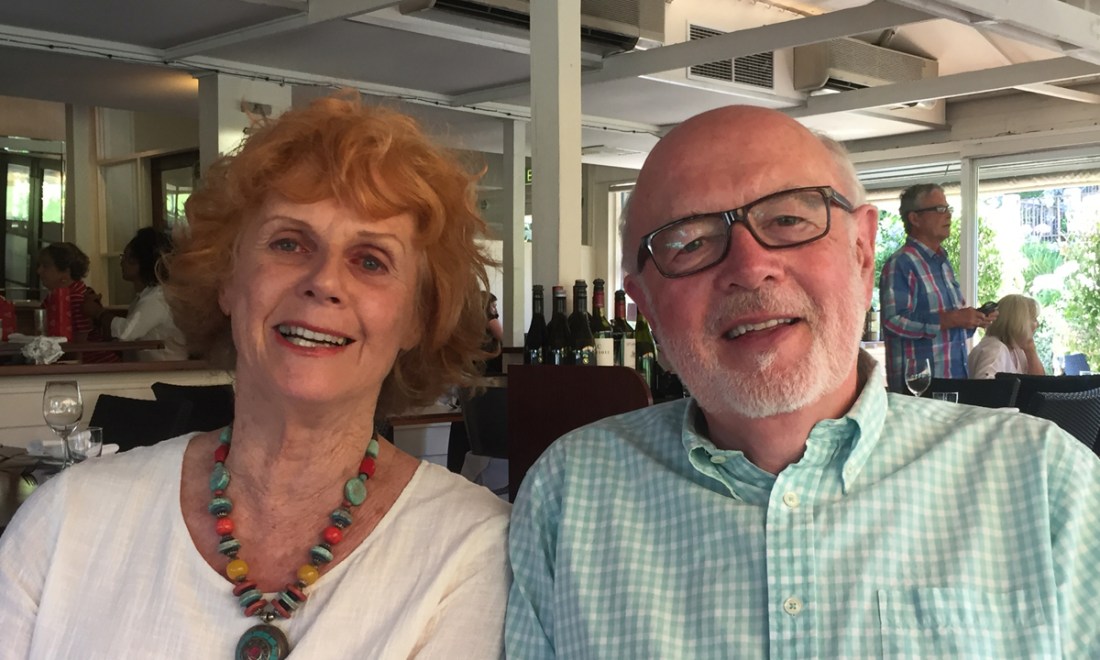 When Belinda was ready to go he was ready to take it over, with his wife Susan, Ian Hannaford and his wife as equal partners. Considerable funds were invested to create the Jolleys Boathouse we know today, although there have been ongoing renovations since. It wasn’t long before Matthews bought Hannaford’s share of the business, brought in another partner, John Knight, and subsequently a share was offered to executive chef Tony Carroll, now in his 16th year at Jolleys.

Carroll is only the third chef, apart from Belinda herself, in the past 30 years. The first was Gordon Parkes, one of that cohort of innovative chefs who put Adelaide on the national culinary map in the ’80s. He had previously cooked at Duthy’s and Reilly’s, and with his partner Jan McKenzie (now at Café Sydney) running the floor – and the whole show, really – Jolleys shone.

A review in 1989 recorded: “Jolleys Boathouse is one of Adelaide’s perfect places in which to lunch on a sunny day or dine romantically on a steamy night, perhaps seated on a terrace overlooking floodlit river banks.”

But it’s more than that because Carroll’s cooking, and his kitchen team, consistently turn out exemplary dishes that tread the sometimes difficult to manage fusion of classic European technique with Asian ingredients and flavours.

It’s no mean achievement for Liverpudlian Carroll, who grew up with takeaway Indian and Chinese as the most exotic food on offer, and describes himself as having been “part of Margaret Thatcher’s inner-city youth problem” until he took part in a youth training scheme. This led to an apprenticeship at the prestigious Gleneagles Hotel in Scotland – “one of the toughest brigades in Europe” – where he was steeped in old-school, classical cooking.

A brief period at the Michelin-rated The Oak Room in London was followed, at the age of 24, by a job on the cruise liner QE2, through which he discovered Sydney in 1990. He returned a year later, and had stints working with Christine Manfield at Paramount and Neil Perry at Rockpool, where he learned how to integrate Asian food into his classical repertoire. Later, he would open his first restaurant at the grand Werribee Mansion Hotel west of Melbourne, which is almost an Australian version of Gleneagles.

His family was based in Adelaide, his wife’s home town, and it was on a visit here that he saw a newspaper advertisement for the job at Jolleys, phoned Matthews, apologised for not having a CV with him – and was hired on he spot. It was a smart move by Matthews and is a reminder of the number of exceptional chefs Adelaide has attracted, many of whom have extraordinary overseas experience. 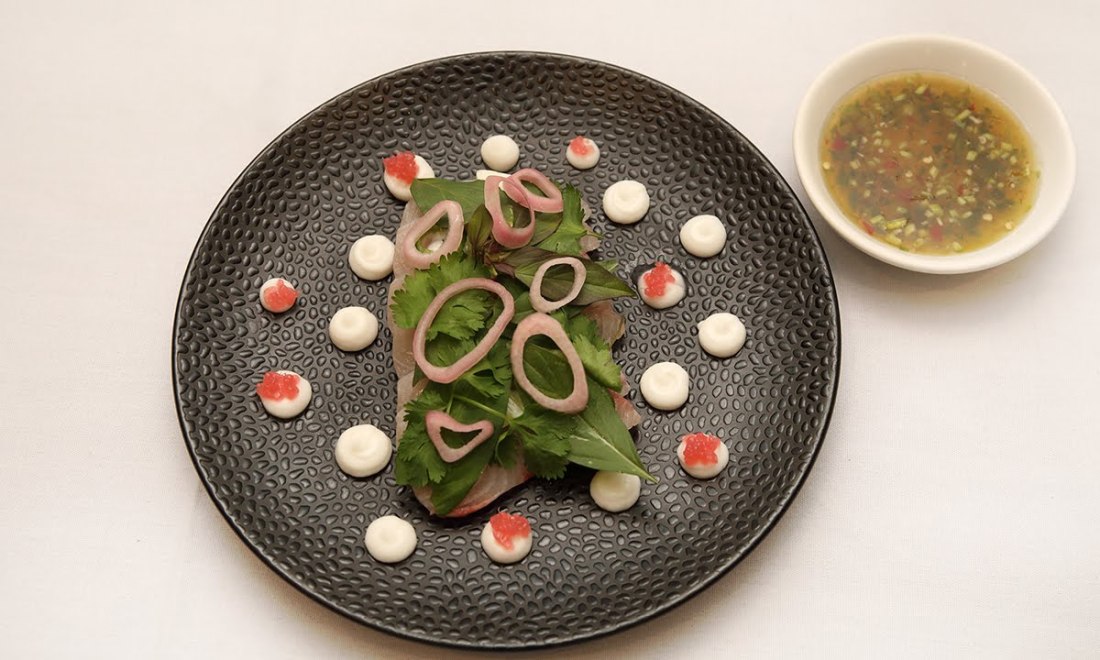 Carroll takes kingfish sashimi into another dimension, thickly cut, topped with Thai basil, decorated with blobs of coconut cream and served with a Vietnamese nuoc cham dressing. South Australian kingfish is so well suited to this sort of treatment it’s hard to imagine why you’d use any other fish.

Another familiar seafood, the gorgeous Goolwa pipis, make any other clam dish seem ordinary, especially when they too are given an Asian-style treatment served in a deep bowl with sliced greens and a deep-fried Chinese bun sitting in a rich, chilli-laced broth.

Spectacular looking but really quite simple in construction, giant, split king prawns from Port Lincoln are marinated in harissa to give them a nice chilli kick then chargrilled and served with fresh lime and more of the harissa sauce. 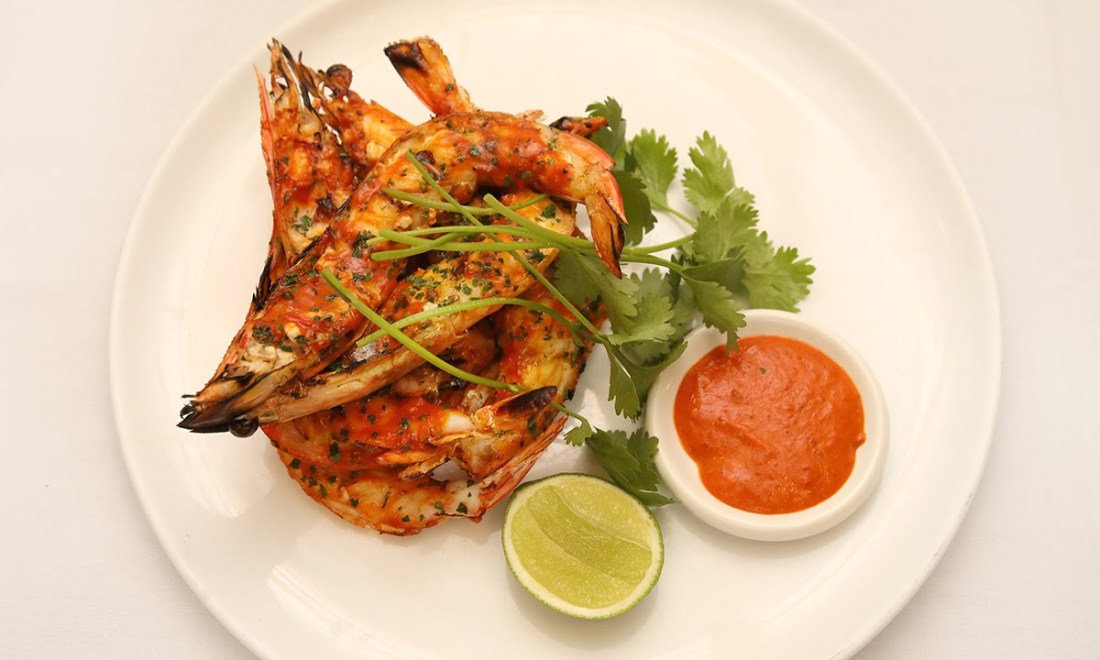 No one has had the heart to tell the river-dwelling ducks that one of Carroll’s best dishes is the tea-smoked duck, currently served with red dates, a rather sweet ginger caramel sauce and stir-fried Asian greens, versions of which never leave the menu. The meat is perfectly cooked, with a distinctive smoky flavour. 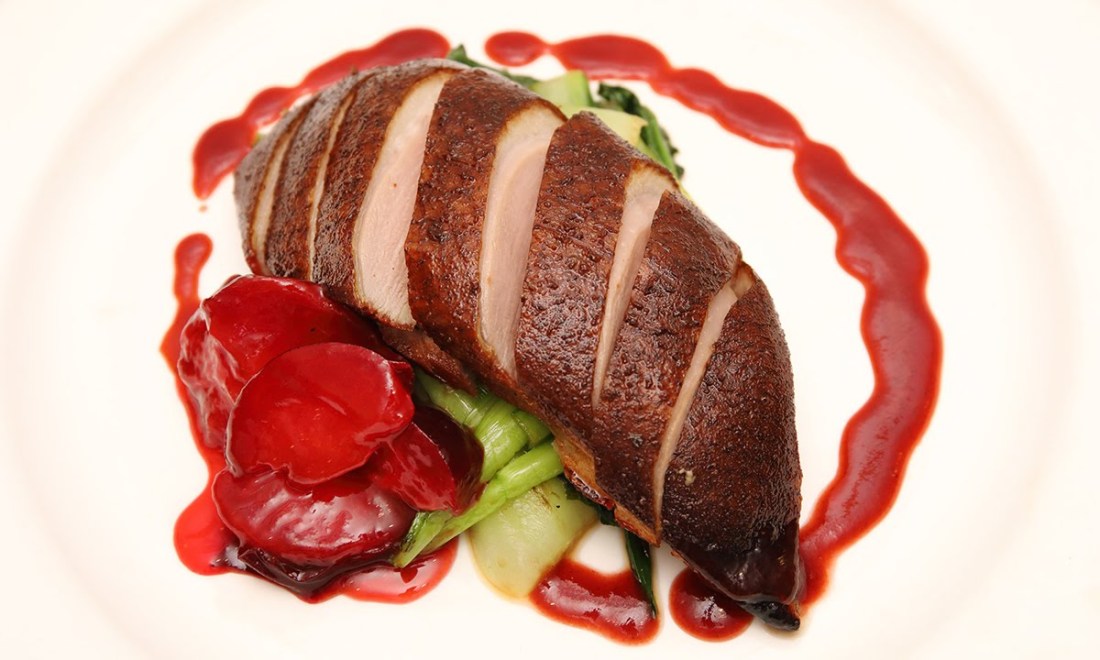 The caramelised pork belly – a series of crisp-topped, well rendered cubes – is a little more one dimensional but lifted by the sharp flavours of a Vietnamese-style green papaya salad with fresh chilli, peanuts and red chilli nam jim.

Among the daily specials, a thick fillet of king salmon has been wrapped in speck then grilled, served with a very summery bread-tomato salad with nectarine and basil.

Desserts don’t often get much of a mention in these columns, but Jolleys version of a pavlova can’t be ignored – shaped like a voluptuous fresh buffalo mozzarella, topped with a puff of Chantilly cream, surrounded by plump loganberries and raspberries. Forget the other dishes, just have this with a glass of champagne. 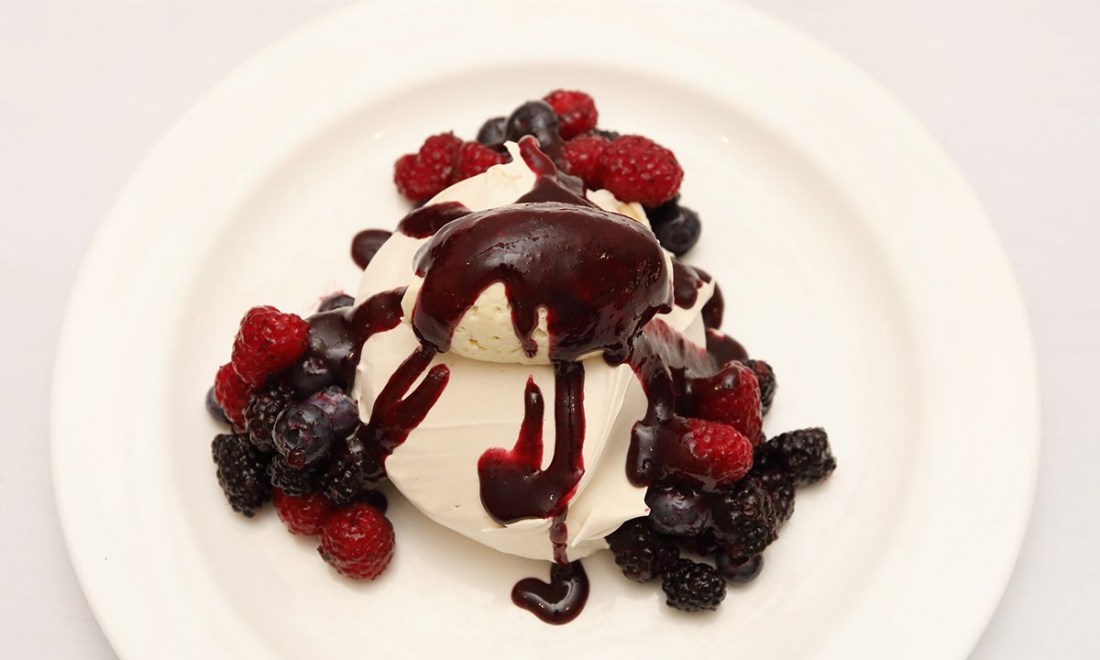