Food and wine matching dinners are pretty commonplace these days, though nearly all of them are fancy affairs, sometimes pretentious and intimidating, with fancy prices to go with them.

Not so at North Adelaide’s Caledonian Hotel, which manages to turn out an extraordinary 70 or so food and wine matched lunches and dinners a year – five courses of very adequate, wine-friendly food matched with up to a dozen or more wines, everything in generous quantities. And not just wine – the list includes whisky- and Champagne-matched dinners as well, just to keep things really interesting.

They are the result of a unique collaboration between hotel proprietor Fiona Nairn and her head chef, Mark Johnson, neither of whom claim any great foodie credentials but share a tremendous passion for the task they’ve set themselves. 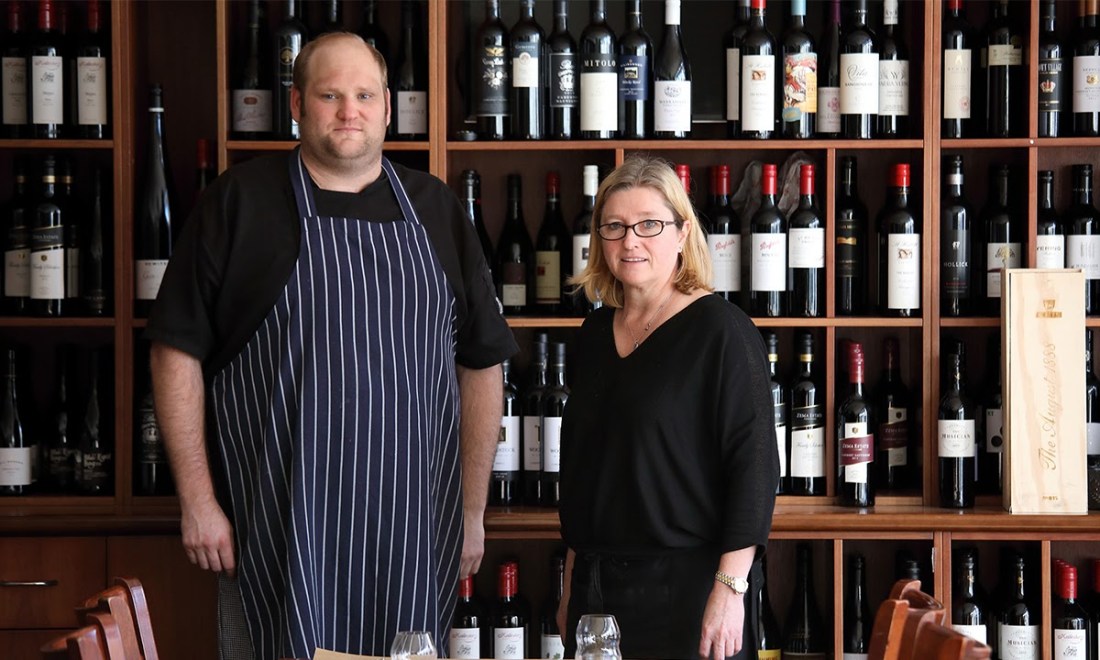 To the casual visitor, The Caledonian is nothing exceptional. It has a good dining room, Bartons Restaurant, with above average pub food and a strong focus on high-grade steaks. A further clue might be the range of Scotch whiskies in the front bar and the solid wine list. But it is the wine-matched dinners that really set The Caledonian apart from anywhere else in Adelaide, possibly Australia.

Nairn must be every chef’s dream boss. A year ago, in the UK with a lunch booking for six at Heston Blumenthal’s Fat Duck and only five guests confirmed, she phoned Johnson and told him to pack a bag and get over there ASAP. In the next day or two they took in Gordon Ramsay’s Michelin three-starred restaurant (“snooty staff, very pretentious, beautiful food”) and the ultra-fashionable Dabbous (“arrogant staff, basil and mint with everything”).

She’s taken Johnson to the cream of Sydney restaurants – Tetsuya’s, Quay, Rockpool and Est among them. Rockpool in Melbourne. And they’re about to head to the US, where they’ve both already dined at 11 Madison Park and will seek new culinary adventures.

Not bad for a pub chef who grew up on a Riverland grape block, did his apprenticeship at the Berri Hotel and then went upmarket for seven years at the Sebel Playford before joining The Caledonian three years ago. He still sees himself as a pub chef, but perhaps not quite your average pub chef.

Not bad, also, for Nairn, whose path to serious culinary enthusiast and major hotel partner has been even more convoluted. Her first job was working in a bottle shop at the age of 18, then in distribution and sales with Woodstock Winery for six years. In 2003 she was approached by then Rising Sun owner Rod Said who was looking for another partner – one of four at that time, now three – to join him at The Caledonian.

Somewhere along the way Nairn had also trained as a speech pathologist and financial planner. Almost as an afterthought she mentions that she also played golf for Australia, and at state level since she was 14. Not a modest achiever. Her financial skills put her in charge of administration, her wine skills put her in charge of the wine list, and as she worked with the chefs so her interest in food also grew.

Their travels together are all about seeking new ideas and flavours, considering dishes that might have seven or eight elements to them and working out how they can recreate perhaps two or three of those elements, using the best produce they can afford and still charge pub prices for, Nairn says, “something better than pub food”. The average price of the wine dinners is $88 – five courses, a dozen or so wines.

“It’s all about making the wine jump out of the glass,” Nairn says. They work on the same principle at Magill Estate, at five times the price.

In what could be seen as a lesson for other pubs, it’s also very good financially. Average attendance is 35 to 50. It’s good business on a Wednesday night, creating extra shifts mid-week. It attracts custom from wine clubs such as Beefsteak and Burgundy. And it sells wine – there’s a form on the back of the menu offering the evening’s wines at close to, if not better than, Dan Murphy prices. At a recent Jameson’s dinner Nairn had $10,000 of its whiskey behind the bar, just in case, and she expects to sell around half of that at just over her cost price.

If she could, Nairn would get rid of the 20 pokies somewhere out the back, which she hates but is locked into keeping. They don’t add much to the hotel’s bottom line but they do affect the value of its lease, and she’s not allowed to do anything that would diminish the value of that lease, so for the time being they have to stay.

Nairn makes it work through tough discipline at all levels: balance across the courses; not too much acid or sugar – although slight sweetness in a sauce brings out the fruit in the wine; no chilli; an average 300g of protein, sometimes using secondary cuts especially if it’s 9+ waygu; and all over right on 9.30pm, having started at 7: “Timing is very important,” Nairn says. “There’s no waiting for courses, it has to run like clockwork.”

It’s not a recipe for blandness in the cooking, as it might appear, but for subtlety, Nairn says: If you’re looking to enhance the wine you have to go French or Italian, mostly French,” she says. “French wine needs food to sing, unlike most Australian wine where you can get away without food. I give Mark ideas for the flavour match and then he creates the dish, keeping the plating as simple as possible so we can get it out quick and hot.”

A recent dinner featuring Wirra Wirra wines, with winemaker Kelly Wellington in attendance to talk about the wines, showed how it’s done. There were crumbed macaroni cheese balls to go with the 2016 Mrs Wigley rosé, followed by 2017 Hiding Champion sauvignon blanc and Lost Watch riesling with crab and cauliflower risotto with a couple of seared scallops. A neat little, full flavoured pork and bacon pie punched things along with the 2016 Original Blend and popular 2015 Church Block, before more serious flavours in slow-cooked beef cheek with polenta and mushroom ragout were matched with the 2016 Catapult shiraz and 2015 Woodhenge shiraz. 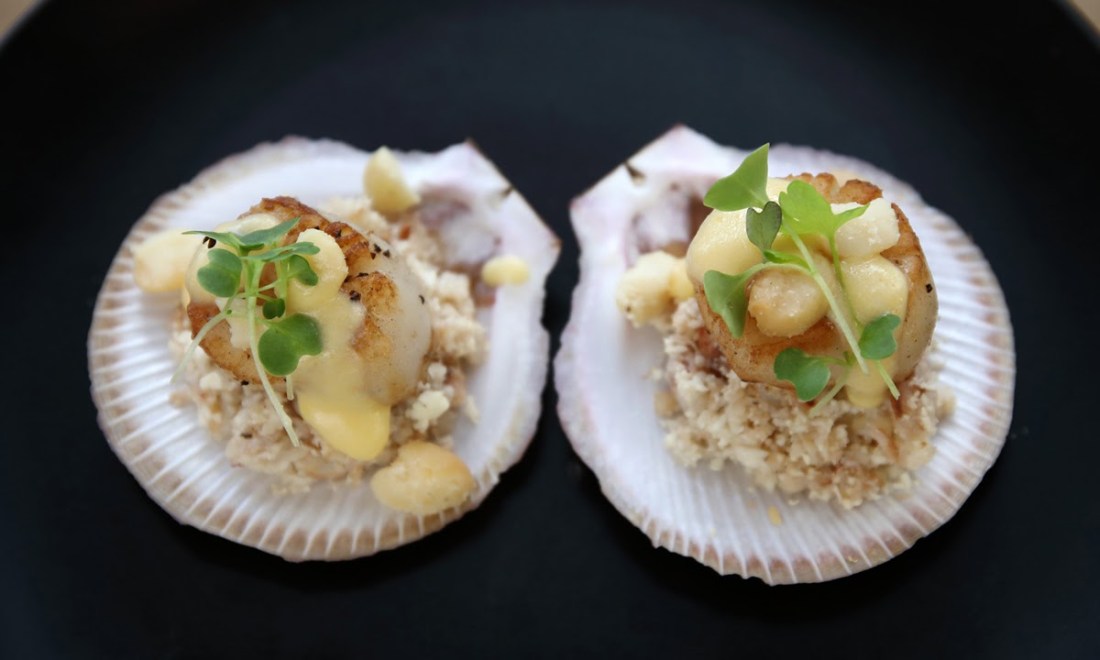 Matching the flavours of food and wine follow a fairly familiar path, so you’d think that matching food with whisky would be much more tricky. Not so, Nairn says. She considers whisky extremely food friendly.

At a recent Jamesons dinner, sitting next to Nairn and opposite Jamesons brand manager Bel Symons, their conversation explains why as they discover flavours of citrus, fruit cake, spice, vanilla, caramel and white fruits, even hints of smoky peat, in the 10 whiskies on show – each a 30ml pour, 300ml in all, more than a third of a bottle with the top-priced bottles $86 to $112.

“Food softens the whisky and diminishes the sense of alcohol,” Nairne says. There are none of the familiar markers – acidity, tannins, fruit – and it seems impossible to say that one whisky or another goes best with any dish, but from the whisky sour with the crisp squid canapés or Jameson Caskmates, finished in barrels that once held stout, with the smoked salmon chowder, the quest for flavour matching seems irresistible.

Suddenly you’re reaching for the Jameson’s 18-year-old to see whether it best matches the Irish-style lamb pie, or would it be better with the slow-cooked pork belly with apple and parsnip puree. It’s all about discovering what the food does to the whiskey rather than the other way around.

“It’s like playing piano keys with different notes,” Bel says. By the time you get to the whiskey panna cotta it’s tempting just to empty your glass of Redbreast pot still over the dish and lick it up. Which is what I did.

The list of dinners so far this year has ranged from Hentley Farm, Hollick, Jim Barry and Irvine to Glenfarclas, Laphroig and Bowmore, with the odd pinot noir and French wine dinner thrown in. Generous, great value, no fuss and very down to earth: “I don’t do pretention very well,” Nairn adds. No she doesn’t.