Bistro Blackwood – an evolution of Zonfrillo’s Blackwood restaurant – is currently undergoing a refit which will include white marble tables, leather banquette seating and an open kitchen.

Zonfrillo says Bistro Blackwood will be similar in style to Orana, “but more approachable … there’ll even be something for kids”.

The Scottish-born chef has enjoyed considerable success with Orana, located on the upper level of 285 Rundle Street. Last month, Gourmet Traveller named it its  Australian restaurant of the year, praising Zonfrillo for his innovative use of unusual native ingredients . 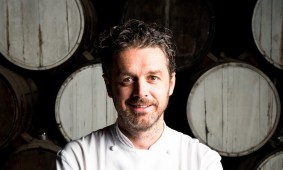 However, the downstairs space which shares Orana’s address has undergone a number of changes in recent years. It originally housed Street ADL – which opened at the same time as Orana and offered a more casual, street-food-style menu; last year, Zonfrillo replaced Street with Blackwood. Further changes were signalled when Blackwood’s head chef left earlier this year.

Blackwood closed on Monday as work began refitting the space for Blackwood Bistro, which is scheduled to open on September 20.

Zonfrillo says staff will work across both Orana and Blackwood Bistro under the guidance of restaurant manager Greta Wohlstadt and head chef Sam Christopher.

“Blackwood is a project for the Orana team,” says Zonfrillo. “It’s a space for our chefs to be creative and really participate in how a restaurant works, from managing budgets to starting each day at the markets or on the phone with our organic farmers.”

He says dishes will be “playful riffs” on bistro classics such as “smoked Goolwa pippies dressed with crème fraîche and beach succulents, fire-pit chicken with cos salad and an eponymous steak tartare”.