Know where Solomon Street is in the city?  Not many do. Unless you work in advertising or use a carpark there, you’d have no reason to. But now it’s home to Sunny’s Pizza, so it’s worth seeking out.

Solomon runs off Rosina Street, next to that open carpark with all the model cars that were stuck to the bricks during an Adelaide Festival aeons ago.

Sunny’s Pizza, which opened last month at No. 17, has five co-owners – including Josh Dolman (formerly of EST on East Terrace), Rob Denisoff (ex-Botanic Bar) and Andy Nowell (The Happy Motel) – who were driven by a desire to have their own pizza place in the west of town.

Rather than trying to carve out space in crowded Peel Street, the team decided to lure people to Solomon Street. They set out to create a place where eating and drinking have equal emphasis; a sociable venue with no bookings taken, DJs playing Dad-rock and a closing time of 2am. 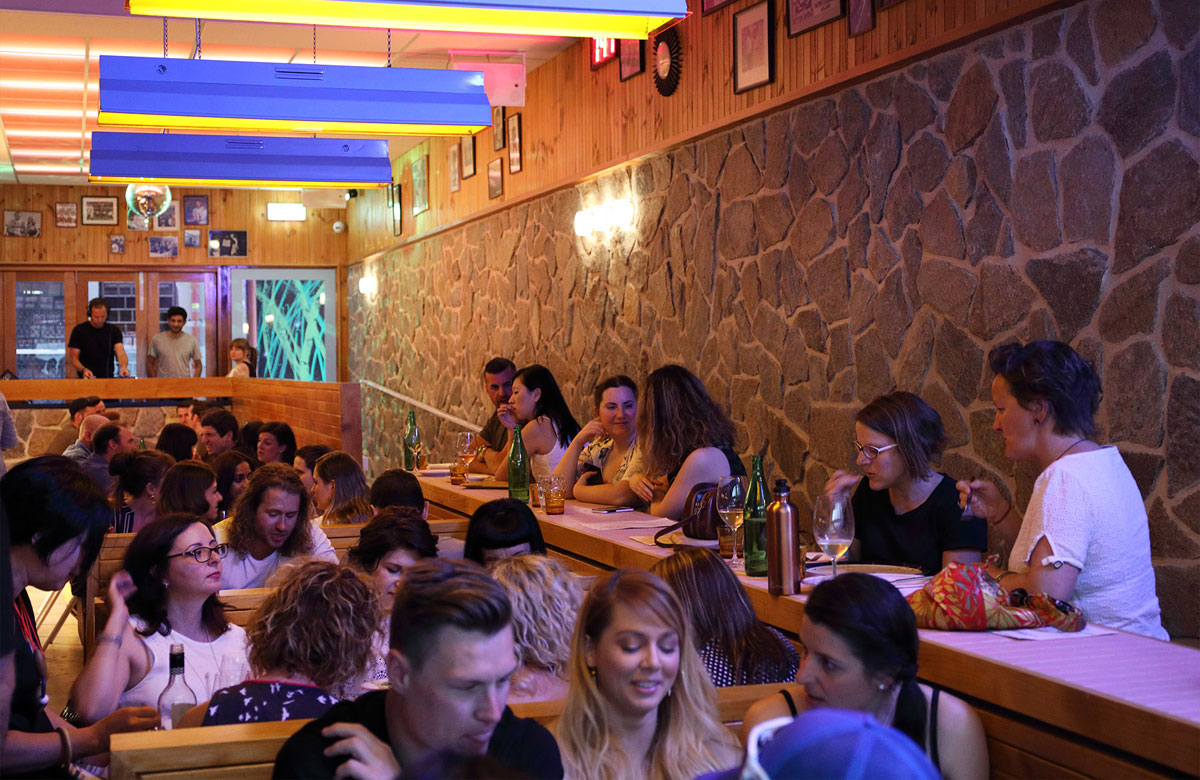 Sunny’s menu, divided into “pizza” and “not pizza”, is available until midnight, with five pizzas and a daily special on offer, plus seven non-pizza dishes – such as vitello tonnato (veal with tuna, mayo and radish), fried squid, and burnt cauliflower – and a daily non-pizza special.

The fried squid is served on a nduja romesco (the nduja is a soft sausage from Calabria, while romesco is a sauce of capsicum, roast hazelnuts and bread), while the burnt cauliflower comes with walnuts and pangritata (breadcrumbs and herbs toasted in oil) – it won me over, and I don’t usually like walnuts. 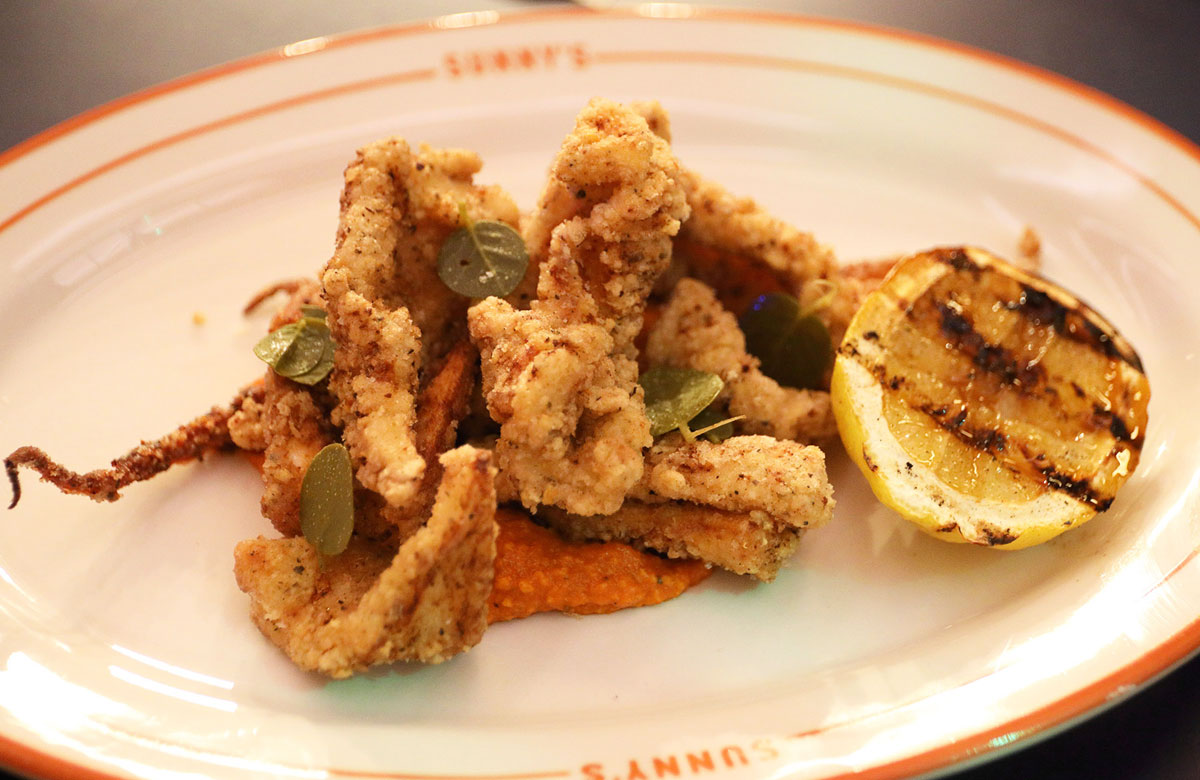 The pizza from the wood oven is so good you might imagine you were in Naples, except the narrow street outside isn’t clogged with Fiats and Vespas.

The base is thin, crisp, and fluffy at the outside edge. The topping on the No. 1 pizza we ordered (pecorino, San Marzano tomatoes, mozzarella and basil) on my first visit was simple and elegant. On a second outing to Sunny’s, my vegan dining companion  pronounced himself “the best kind of full” after an eggplant pizza (the non-vegan version has eggplant parmigiana, mozzarella and garlic confit).

Designed by Studio-Gram (the same team behind the interiors of Osteria Oggi and Africola), the Sunny’s Pizza fit-out is casual and welcoming, with a stone wall opposite the wood-panelled bar, pizza oven and kitchen. It’s embellished by photographs taken by Andy’s father, former press photographer Grant Nowell, including ex-Australian prime minister Gough Whitlam in an “It’s Time” T-shirt. 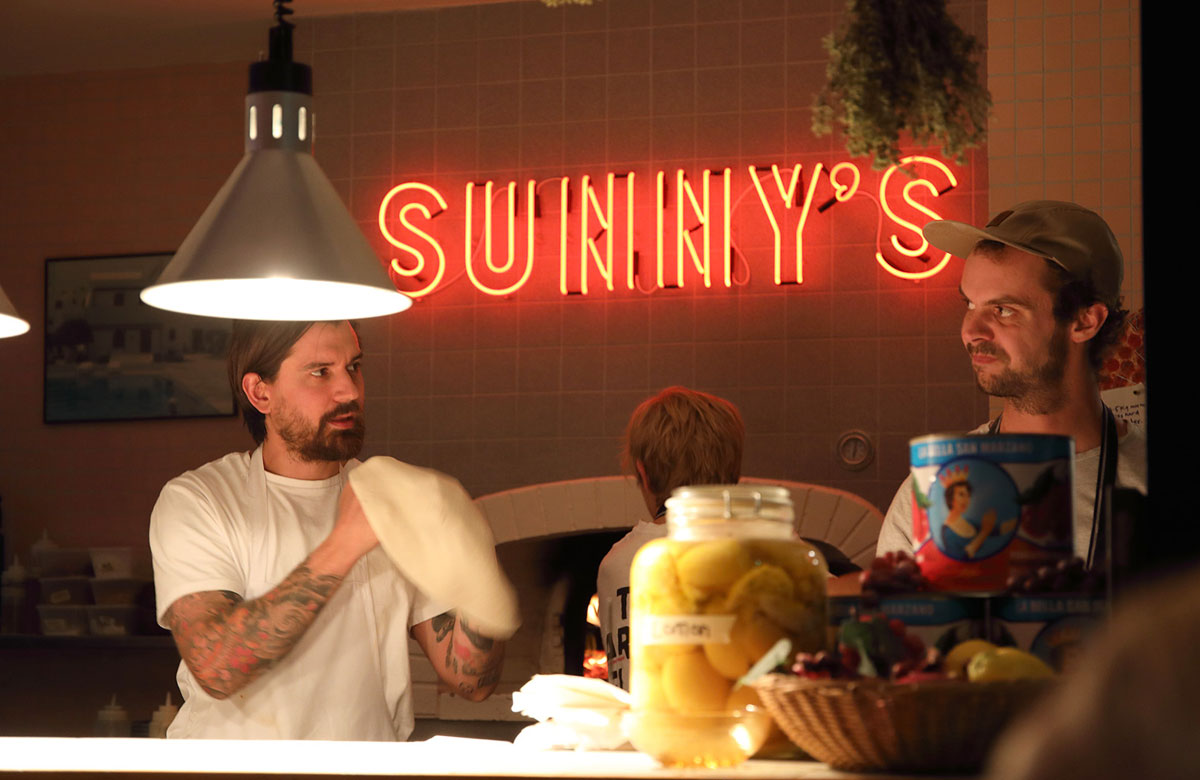 At 6.15pm on a Wednesday, Sunny’s was already buzzing with a clientele ranging from tradies in hi-viz to office workers. What they had in common was a smile on their faces as they relaxed into the ’70s-retro-casual feel of the place.

Returning on a Saturday night visit, we found a crowd spilling into the street waiting for a table.

Was there ever a crowd spilling into Solomon Street before Sunny’s arrived?